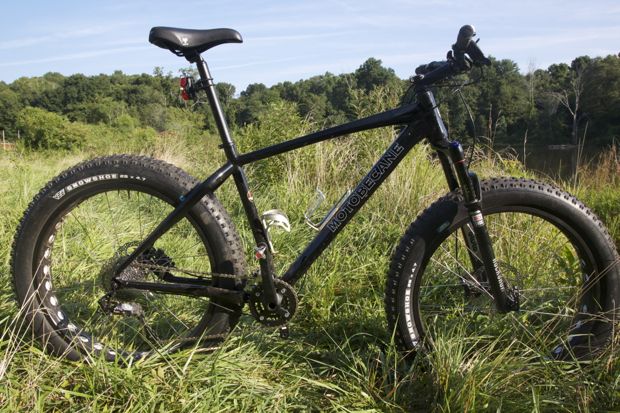 The 2015 Motobecane NightTrain Bullet ($1499 MSRP) is a full-featured fatbike that is willing and able to tackle almost any terrain on planet Earth.  Although this RockShox Bluto-equipped bike is currently only available for pre-order via BikesDirect.com, I recently got my hands on one ahead of the official October release date. Here’s what I can tell you after a few rides aboard this rig. 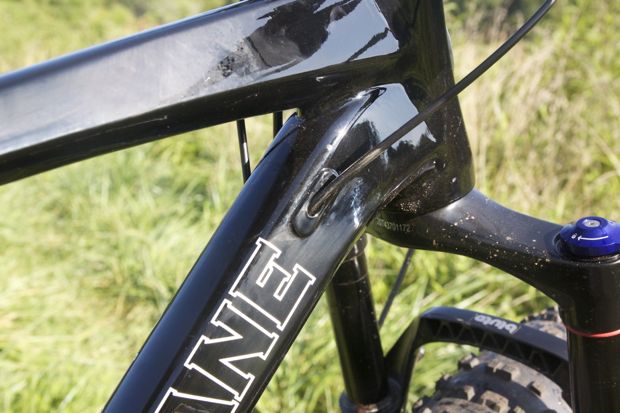 The NightTrain Bullet features a hydroformed 6061 aluminum alloy frame with a tapered headtube. The top and down tubes sport angular profiles, and the bike features internal cable routing for the front and rear derailleurs. The seat tube is set up for a 30.9mm post. 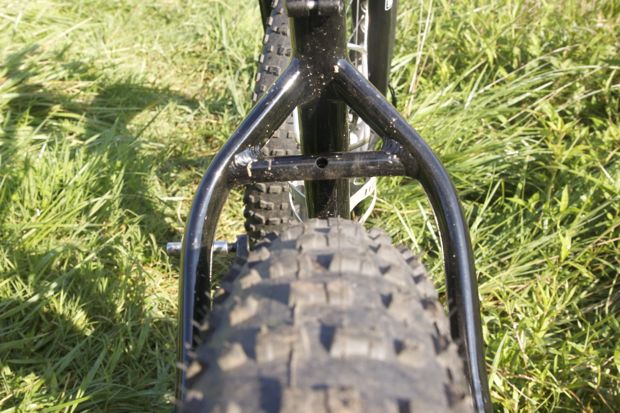 At the back of the bike, the NightTrain Bullet uses a 190mm thru axle for added strength and stability. Early chatter indicated the frame could accommodate tires up to 4.8 inches, but my guess is 5+ inch tires wouldn’t be too much of a stretch.

The frame is offered in a “Matte Black” or “Matte Silver” finish, though the bike I’m testing has a black gloss finish which I really dig (easier to clean!). 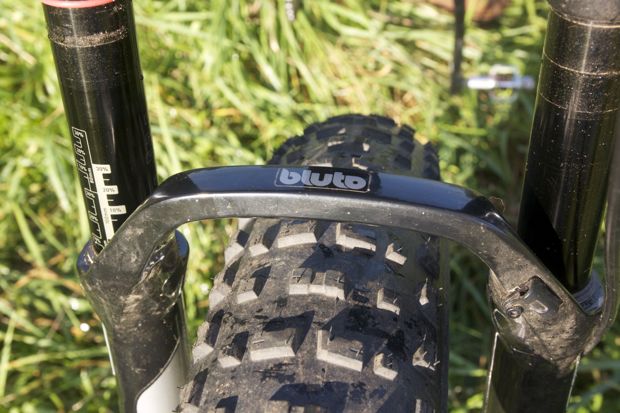 First things first: this bike ships with a sweet-as-honey RockShox Bluto 120mm suspension fork with a 15mm thru axle. Now, a suspension fork might seem unnecessary for riding in the snow–but that’s ok, because I probably won’t be testing this bike in the white stuff anyway. What I do know is that the suspension fork has already proven incredibly useful for riding in most other conditions (sand notwithstanding).

The fork does add some weight compared to a rigid fork, but it’s still easy enough to get the front end off the ground. The Bluto features a handy compression dial that makes it possible to essentially lock out the fork for climbing. I’ve been experimenting with riding the fork locked and unlocked to see just how much difference it makes in the rough stuff, and I can tell you already: it makes a big impact on performance! 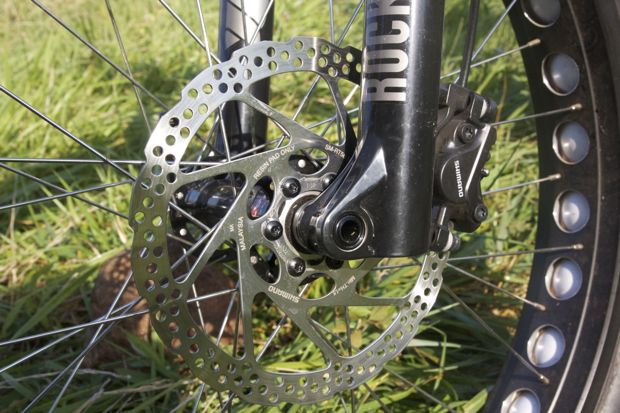 Stock alloy rims (single wall) keep the NightTrain Bullet rolling, and while they probably aren’t the lightest wheels you’ll find, they do feature weight-reducing cutouts. (My test bike features double wall rims, but the production bike will feature single walls for additional weight savings.) The wheels feature Novatec thru-axle hubs (front and rear) and are shod with Vee Snowshoe 26×4.7″ tires. The rims are not tubeless ready, but some folks have already had luck converting them. 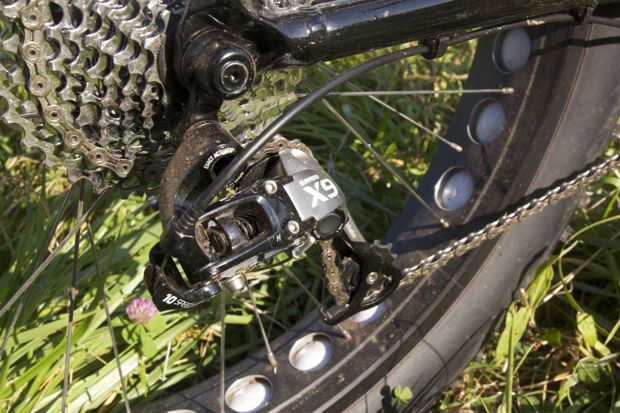 The drivetrain features the excellent SRAM X9 Type 2 rear derailleur and SRAM X7 shifters and front derailleur (2×10). The crank is set up with 22T and 36T chainrings. 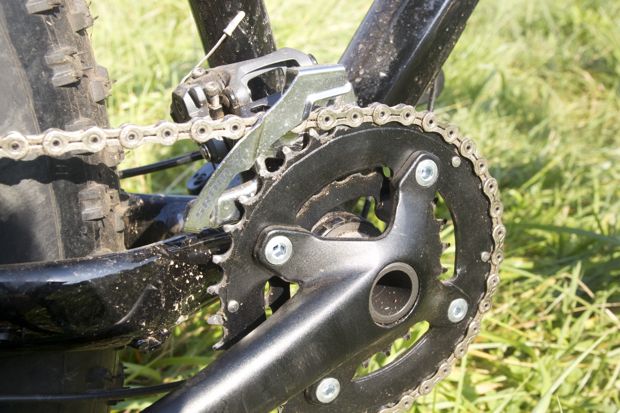 The brakes on my test rig are the highly capable Shimano Alivio M447s, though the production model will ship with SRAM Guide stoppers. Either way, you’ll find 180mm rotors, which are a good match for slowing the momentum a bike like this carries on the trail. 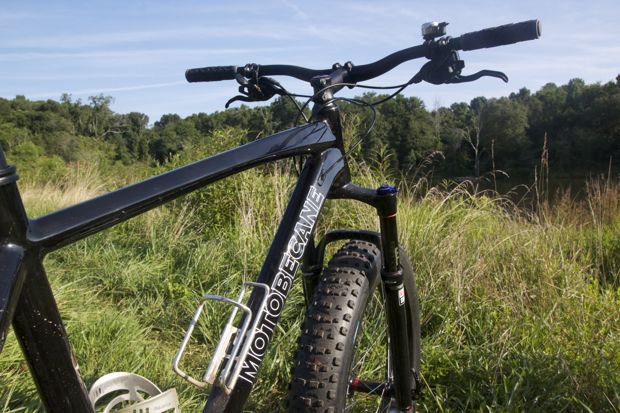 Handlebars are 700mm alloy bars matched with a 90, 100, 110, or 120mm stem, depending on the frame size. The NightTrain features a fairly basic WTB Speed V Sport saddle on an alloy seatpost.

Remember the days when mountain bikes were called ATBs–all terrain bikes? These days it seems bike companies have gotten away from the ATB concept and instead focused on creating CTBs–bikes designed for “certain terrain.” Think: carbon hardtails meant for riding fast on hardpack or DH sleds that are only meant to be pointed downhill.

But so far I’m convinced the NightTrain is actually the ATB we were all hoping to buy back in the early days of the sport. Equipped with a supple suspension fork, the NightTrain rolls over chunder, navigates sandy washes with ease, blazes trail where there is no trail, and even rides up stairs (this last one is still my favorite).

I’m planning to put more miles on this rig before delivering my final report, so stay tuned to hear how the NightTrain Bullet handles on the trail.

Gear
The Specialized Stumpjumper Trail Bike is On Sale, Along With...
Gear
Matt and Jeff Weigh in on the Least Useful MTB...
Gear
The WTB Raddler Gravel Tire is Fast Down the Middle,...
Sponsored
What Mountain Bikers Need to Know About Bicycle Insurance
Subscribe
Login
Please login to comment
7 Comments
Most Voted
Newest Oldest
Inline Feedbacks
View all comments

That sounds like a great price for a well-spec’ed bike. Any thoughts on where a rider could drop some weight best if they chose to upgrade some components?

Well, the production bike will feature lighter wheels and tires but beyond that, nothing stands out as a place where you could drop a lot of weight at once (the fork? no, that’s a big part of what makes this bike great!). Keep in mind too that this is a 20″ frame so it’s bigger and heavier than other sizes.

If a fatbike is going to be your primary rig (and honestly this isn’t an unreasonable idea), then I might be concerned about the getting the weight down. But as a secondary (or thirdary) bike, I would just replace stuff as it wears out with the lightest parts my budget will allow. And I would definitely have fun on this bike in the meantime!

Can you give more info on the hubs? Specifically the rear hubs width (maybe some pics too). I am looking to have a wheelset built (I have a NT coming in Oct) and want to know if the hubs are 190mm or maybe they are a 197mm.
My understanding is that thru-axle hubs are 197 and 190 should be a QR. Looking to match up hubs on my wheelset build. Thanks.

I’ll be keeping my eyes peeled around Decatur for that monster… been wanting to ride one of those! 🙂

waiting for the final report

Coming soon! I had hoped to post the final review before Interbike but some last minute part swaps (like adding Guide brakes which will be shipping with the Night Train) have delayed things a bit.