When I was a kid, I was powerfully jealous of my neighbor’s Diamondback bike. This was the mid eighties, when a kid’s BMX bike was the most important thing in his universe. Now all those eighties kids are grown up. They’re distracted by important concerns like work, mountain bikes, family life, mountain bikes, and, most importantly, bicycles that are intended to be ridden off road. Say… on a mountain, for instance.

Well, luckily for we eighties kids–not to mention you revolting young whippersnappers born some time later–Diamondback still makes bikes, and they are serious business. 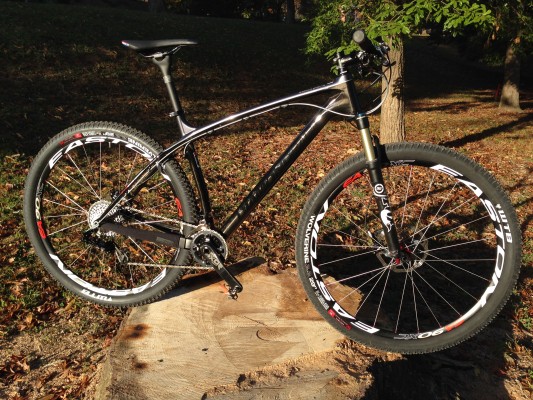 If you can look at that bike and tell me it doesn’t look seriously badass, you need to grab your monocle and have another look. If bikes were beards this one would be right at home on Chuck Norris’s rugged chin, and he once punched a mile wide meteorite back into orbit.

Just look at those understated graphics. You have to get it in just the right light to see them, which tells me Diamondback is happy to let the bike speak for itself. I hear what it’s saying. It’s saying “let’s ride.”

Okay, looks aside, what does this bike bring to the table? How about a SRAM XO build kit? How about a Fox 100mm fork and some Easton wheels, and some 180mm front/160mm rear hydraulic disc brakes for all your stopping needs? You get all that on this bike, and the fork even comes with a clever three-position remote lockout.

Here’s the lockout and brake lever: 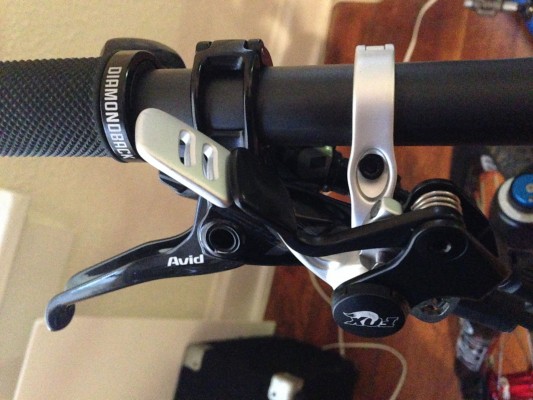 Personally, I have never been much of a weight weenie. It doesn’t make sense to me to talk about how light my bike is when I could easily be lighter, which I absolutely will be as soon as beer stops being so delicious. Even so, this being a top shelf XC race bike, weight is an important concern. I used my homemade bike scale system to weigh the bike like this.

Yeah, that is a camera tripod supporting a bike on a scale made for people. Probably not the most scientific method, but it kind of worked. I rode it down the street to a bike shop and they used their digital scale to weigh it, and it came in at 23.6 lbs. My crazy camera tripod method had it at 23.8lbs, so maybe it’s not so crazy. Keep in mind, though, this weight is with my super heavy eggbeaters and a decent layer of trail dirt, and probably some heavy tubes as well.

The tires and rim are both tubeless ready, so you can run super-low pressure and shed some extra weight in the process. Check out Diamondback’s page on the bike here for more manufacturer info on tires, tubes, and other build group components.

I am really enjoying putting miles on this bike. Stay tuned for my full review which will come soon!

Thanks to Diamondback for sending the Carbon Overdrive Pro 29er over for review!