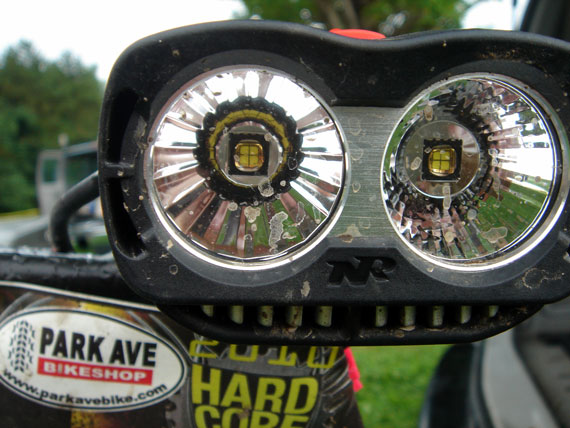 The NiteRider Pro 1200 LED is virtually alone in the upper echelon of lighting systems for adventure sports. Whether you’re mountain biking, motocrossing, or snowmobiling, this is a powerful light system that rivals the brightness of most automobile headlights. I got a chance to field test the Pro 1200 over the weekend at a 24-hour mountain bike race in upstate NY and I was very pleased with the results.

The Pro 1200 is an 850 gram unit about the size of a large kiwi and is split into two LED clusters, each pumping out 600 lumens into two different reflector patterns. The left reflector puts out a spot beam – an intense cone of light that shoots down the center of the trail, with a nice halo into the surrounding area so you can see where your wheel is going. The right reflector puts out a flood pattern, a wide dish of light that seemed to illuminate about a ninety-degree arc in front of my bike for about fifty yards, depending on where I aimed it. 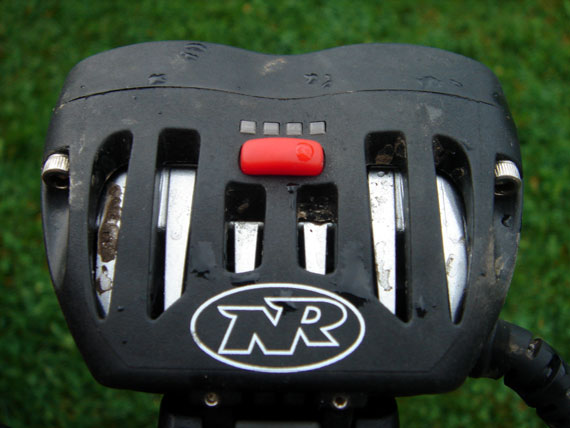 The small red push button on the top turns the unit off and on, and switches through the various pre-loaded light modes (spot light, flood light, or both). But the real innovation in the NiteRider Pro series is the ability to use NiteRiders own D.I.Y. software to design custom lighting programs. I didnt get to use the software this weekend but I was able to talk with NiteRider rep Tommy B. about it for a while. Tommy told me the Pro series of lights can have up to four distinct programs, each with six different levels of lighting power that you can customize. Ive played around with the software for a bit and it seems like you could spend a ton of time tweaking power levels, run times, lumen counts and strobe effects between both lights. This might not seem like a great advantage for the novice rider but for professionals it could make a huge difference in a long endurance race. 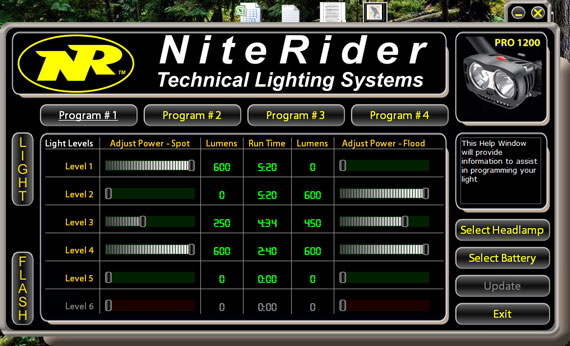 My weekend with the Pro 1200 was wet, dirty, dark and foggy which was great for testing the worst possible conditions a light might endure on the trail. Fortunately the Pro 1200 cut through the night like a rock star. The trail was lit up clear as day. Everyone saw me coming from miles away and no one could look away from the supernova that I was proudly sporting on my handlebars. 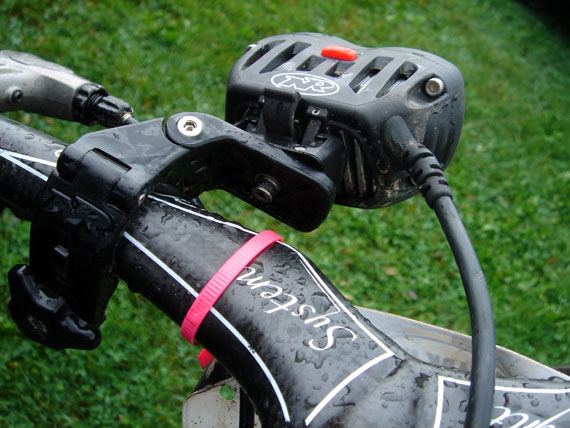 Here’s a pic of the NiteRider Pro series battery mount, which sticks to the bike and allows for easy hot swapping during the race. 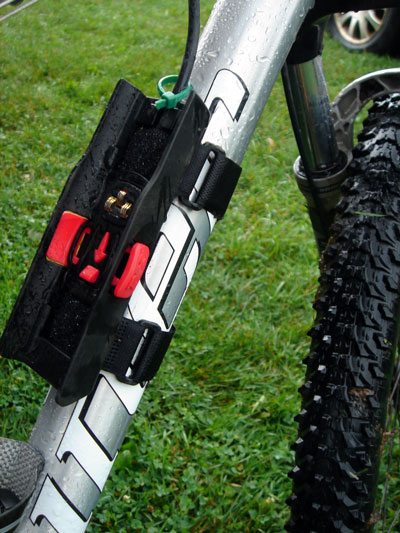 The Pro 1200 bike light is not for the meek. It’s big, tough and bright like an army of a thousand suns. Of course all of this awesomeness does come at a cost: the Pro series lights are expensive and fairly heavy because they’re built like tanks. The heat sinks and rubber parts are solid and the flanges and bolts are not made cheaply like many of the discount lighting systems that you find on the internet. The price tag alone might dissuade some people from making the investment, but for pro-level lighting systems that will stand the test of time, NiteRider is the smart choice.

NiteRider lighting systems are simple, easy to mount, and rugged enough to withstand the worst Mother Nature can throw at you. Not only is the Pro 1200 bright and incredibly tough but the beam patterns are clear and even, making for a spectacular view of the trail in the middle of the night. If the Pro 1200 is this good, I cant wait to see what additions have been made with the new Pro 1400 LED which is just coming into the market.

Many thanks to NiteRider and Tommy B. for the hookup with the lights, support, and advice during the race!

So what SPF level of sunscreen to prevent burning? Looks like stadium lighting…NICE!

I really like that quick change battery sleeve, seems like a great idea for 24 Hour racing. I also didn’t realize the DIY software allowed you to adjust power for the flood and spot independently – that seems super helpful. What’s the MSRP?

I was told that many pros like to run this light at 250 lumens spot and 350 lumens flood, which seemed like it would have been a good combination.

I neglected to mention the MSRP, which I think was $599, but this will drop soon as the Pro 1400 comes to total fruition. One thing to note is that if you see the NiteRider truck at a race, you may be able to get a 20% discount for purchasing a lighting system at the event.

What kind of handlebar is that!?!

Night rider makes good stuff. I have an HID light of theirs that’s a few years old, and it’s been reliable, which is important when you’re out in the dark!

Nice review and nice light! Whoo, for that MSRP I could buy 7 MagicShine 808’s though. NiteRiders are definitely well made, though.

@Dustin Gaddis – that is the T.H.E. Flight System, it’s a full carbon handlebar woven around a carbon-alu stem. Pretty sweet.

[…] last experience with NiteRider’s big 1200 rig left me with stars in my eyes, so I was eager to test a light that […]