I admit it: I’m big mountain bike data geek. I want to know how many people ride a particular trail, what kind of bike they’re riding, and how often they ride it. And if you’re familiar with singletracks.com, you know we collect this data and display it on trail and gear pages for everyone to see. We even use these metrics to produce our best trail and best gear listsand over the years we’ve collected a ton of data from many of the 150,000 mountain bikers registered on the site.

Recently we decided to start mining that data to see what kinds of trends we could uncover for some slick mountain biking infographics. Our first order of business: determine what types of mountain bikes are trending up or down in 2012. 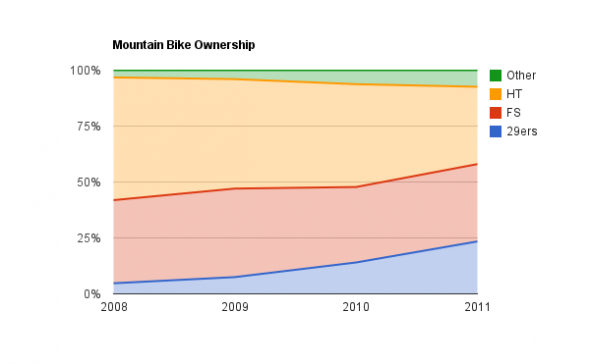 This chart above shows percentage ownership of various types of mountain bikes. For our purposes, full-suspension (FS) and hardtail (HT) bikes are generally of the XC-variety (4 inches of travel and under). The “Other” category includes mostly longer travel bikes (all mountain, downhill, freeride) but also includes hardtail dirt jumpers. The 29er category includes both full suspension and hardtail bikes. There is no overlap between categories (that is, a hardtail 29er will only show up in the 29er category and not the hardtail category too).

Reading the chart you can estimate the percentage of ownership by subtracting the difference between colored lines. For example, in 2011 FS bikes comprised about 30% of the bikes owned — 55% minus the 25% share for 29ers. Make sense?

Now for the analysis. Clearly 29ers are trending up in a big way, with just 5% of singletracks members owning a 29er in 2008 vs. 25% in 2011. But what is 29er growth coming at the expense of? Hardtails with 26-inch wheels, no big surprise. But take a look at the FS share in the red block. It looks like the FS share hit its peak in 2009 and lost ground in 2010 and 2011, perhaps due to more FS 29er choices on the market in the last two years. The “Other” gravity-type bikes are gaining ground too, though at least here on singletracks they aren’t a big part of the picture yet.

So what can we expect in the future? 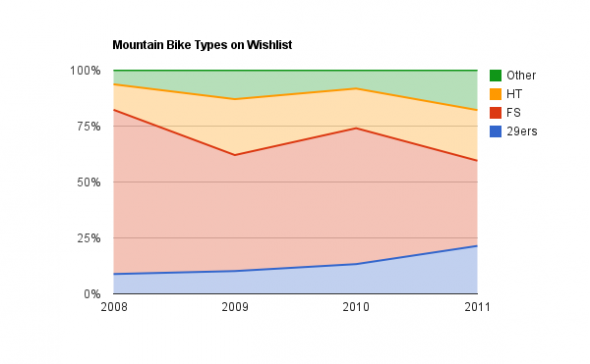 Using the numbers from singletracks members’ wishlists, we see a similar trend, at least with respect to 29ers. Almost 25% of members wanted to buy a 29er in 2011 which should push the ownership percentages even higher in 2012. This isn’t a big surprise to me – the 29er trend still has a lot of steam, despite the far off predictions of a 650bresurgence in the market.

From this chart it’s also clear that 4-inch (and under) FS bikes aren’t as lust-worthy as they used to be. The FS wishlist share is trending downward while the longer travel share (AM, FR, DH) is growing. As such, I also expect to see long travel mountain bikes growing on the ownership side for the next several years,especiallyonce costs come down a bit.

Another way to look at this chart is to consider the mountain bike buyer’s timeline. In the first chart we see the share of HT mountain bikes is much higher than in the second. It stands to reason that a lot of people own HTs because that’s what they start out with (these bikes are generally less expensive) but for their second bike (the wishlist) they’re more likely to want a bike with some travel (either short or long).

As you might expect, this data and analysis comes with a few caveats. While the data is from a very large set, it still only captures singletracks members who use the gear lists and it also assumes people are truthful in their gear list choices. Further, the analysis relies on the way the bikes have been categorized on singletracks which may not be 100% accurate.

So what do you think? Share your analysis in the comments and feel free to suggest other MTB trail and gear data you’d like to see crunched!

It is not surprising to see this type of transition to more 29ers being used. More and more companies are producing these bikes, the wheels are becoming nearly as stiff as 26ers, and major companies are making some great aftermarket upgrades. Now, most anything that can be purchased for a 26 inch wheeled bike can be found for a 29er too

Right Greg, the FS bikes are basically 26ers with 100mm of travel or less. Based on the charts I think this may just be the start of their downtrend!

We also need to start a new gear category for 650b bikes to track. Even the 5″+ 26er bikes may get squeezed if 650b ever takes off…

Funny how people still want to lump all 29ers together in one category. Not just on this site. It seemed natural at first when they were rare, but now it seems like they should start getting divided up just like the 26″ wheeled mtbs.

You’re right Jeremy – there should be a better way to categorize mountain bikes. Maybe just HT and FS then tagging the bikes (29er, AM, FR, etc.). That’s sorta how the 650b bikes are organized right now: http://www.singletracks.com/mtbreviews/Mountain-bikes/1.htm?tag=650b

I am a big fan of data too, and seeing the trends in types of bikes was extremely important. I may have to update my bike wishlist as a result of this post.

@maddslacker, idk. I just finished reviewing one in that category from ibex, and while it was a decent bike, it just felt like it would have been so much better with bigger wheels or more spring.

@Madd, There are still a lot of 4″ travel FS 26ers out there. Trek’s Top Fuel and Giant’s Anthem comes to mind. More marketed to the 26″ stalwart XC racer crowd.

With racers adopting 29ers, I think the 26″ ‘race bike’ is doomed pretty soon.

I would definitely have to agree with that statement about it being doomed. Honestly, I think it was probably a foregone conclusion before companies even started developing FS 29ers. Suspension design improvements coupled with improved shock tuning would have eventually killed most of the market for the 4″ 26er anyways. People have already started riding increased travel FS bikes as their everyday ride since they’re pedaling uphill so well now. The trend since the first mass produced FS bikes started getting pushed into the market in the 90s has been to increase the travel requirements gradually for each category of bike. Like you mentioned above, FS trail models like the Trance and ASR are all slowly increasing travel into the 125mm and up range. It is reasonable to assume that there will be a limit to how high the travel will go. However, the more efficient suspension platforms become, the lighter materials and parts become, and the more riders push the boundaries of the sport, the higher the travel numbers will go.

Around here 29ers are totally dominating the trails. Yeah, you still see 26″ bikes around, but you don’t see any NEW 26″ bikes anymore, at least not above the $1,000 price point. The local bike shops don’t even stock high end 26ers anymore.

I think in just 2-3 years the the sole domain of the 26″ wheel will be entry level bikes, very small frame sizes, and long travel bikes (although it basically is right now)… and soon, JUST long travel bikes.

My next bike will be a 29er hardtail. I’ve ridden a few 29ers with full suspension and they ” felt” too disconnected with the trail. A hardtail 29er with good front suspention offer a better more comfortable ride than a 26er hardtail due to the 29ers ability to pass over trail irregular trail things like roots, rocks, etc. For down hill FS bikes rule for sure but don’t try to climb on one easily. Remember the 29ers best sponsor is momentum. Being a fat older guy with no racing in the future I feel the hardtail is the best for me but the 29 inch wheels are in the future. Later,

1st thought: Shouldn’t the totals be greater than 100% to account for cyclists that own more than one type of bike? Or did you only use data from “one-bike only” gear lists?

2nd thought: I need to update my gear list to reflect the fact that I have a hardtail AND a full suspension. Plus, later this year I should be a 29er as well. (Getting close to finishing the build!)

@jaredmcvay, I’m not sure that will be true forever as more component makers dial in their 29er designs. Really the only thing that’s appreciably heavier about a 29er is the wheels and tires – in theory 11% heavier based solely on dimensions. But if you figure the wheels and tires are, say 25% of the weight of a bike, that translates into roughly 3% more for the bike overall. Adding in other factors (thicker/strong spokes, slightly tweaked dimensions on frame, fork) worst case gets you 5% heavier (about a pound).

Put another way: would road bikers swap out their 700c wheels for something closer to the 26-inch road equivalent to save weight? Probably not – 15 lb. bikes are light enough already. 🙂

@nanook, we just looked at bikes added to the list each year so that’s why it adds up to 100%. The analysis sorta assumes when you get a new bike you stop riding the old one which is a big assumption (should add that to the caveats). And this also breaks down when you consider a new member may add all their bikes the year they join singletracks which doesn’t reflect which bike is their “newest” or most ridden.

@trek7k, I hope you don’t think I was ragging on your analysis! It was not my intention, especially since I’m a data junkie too. I probably skewed your data a bit though. I got my FS new in 2008, but I added a used HT in 2010 as a backup/commuter, and I ride both out on the trails. Admittedly, the FS gets more action; but there are times when the old HT is still a lot of fun.

No problem nanook, in an analysis like this you gotta make a lot of assumptions but despite that, I still think the trends we’re seeing in this data are pretty solid.