Six years in the making, this full-suspension carbon wonder bike from Ibis has long been anticipated by Ibis fanatics and casual observers alike. At Outerbike 2013, I had a chance to spend some quality time with a Ripley out on the Moab Brand Trails, leading me to choose the Ibis Ripley as the best 29er of 2014. 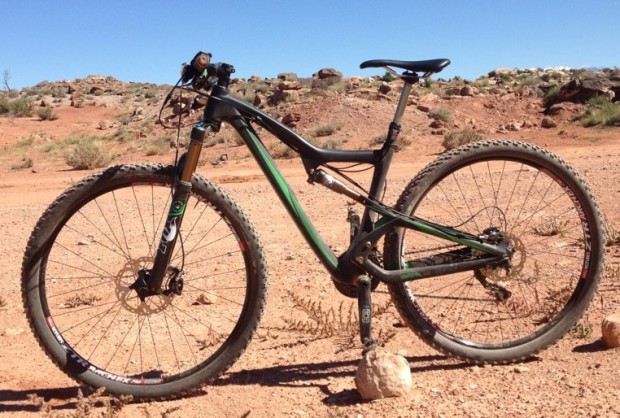 The big story with the Ripley frame is the eccentric linkage. According to Ibis,

The heart of the Ripley is its dual-eccentric dw-link suspension. Instead of using external linkages like we do on our longer travel bikes, we were able to construct the Ripley with two small eccentrics, hidden inside the seat tube, which act as the suspension linkages. This clever system was conceived by Dave Weagle (he’s the dw in dw-link) in 2005, and we started development of the system in 2007. Since then, we have been building, testing refining, racing and simplifying the eccentric system. . . .

There are many benefits to an eccentric linkage system. Because the bearings are located inside the seat tube, they are shielded from wheel spray and contamination. The look is very clean, as everything is hidden inside the frame. Additionally, the eccentric system is lighter than our external linkage systems.

A great benefit, particularly on the 29” platform is that the eccentrics let us build the bike with shorter chainstays, giving more room in the tight area around the rear tire and front derailleur.

Though the linkages are small and close together, the eccentrics allowed us to make a right side upright between the front of the chain and seat stay, resulting in added stiffness, critical for the larger loads of the big wheels. . . .

The geometry of the Ripley varies depending on the frame size and the length of the fork being used. The head tube angle is 70 degrees with a 120mm fork and 68.5 degrees with a 140mm fork, but for full geometry and sizing specs, click over to Ibis’s website.

Ibis provides the Ripley in a wide array of complete build levels and styles, featuring components from all of the major brands. When it comes to complete build options, prices, and final weights, the sky is the limit.

If you’ve ridden any of Ibis’s other offerings, such as the Mojo or the Mojo HD, hopping on the Ripley will seem very familiar.

Let’s be clear: the Ripley can tackle some serious gnar. With 120mm of suspension (and an optional 140mm fork), a great suspension design, and the addition of a dropper post, there are very few obstacles in regular trail riding or big-loop terrain that will overwhelm the Ripley. I pinned this rig through rock gardens, railed turns, and launched it carelessly off drops but I didn’t manage to reach the Ripley’s limits on my Outerbike test ride. This bike is capable, and it’s aggressive. 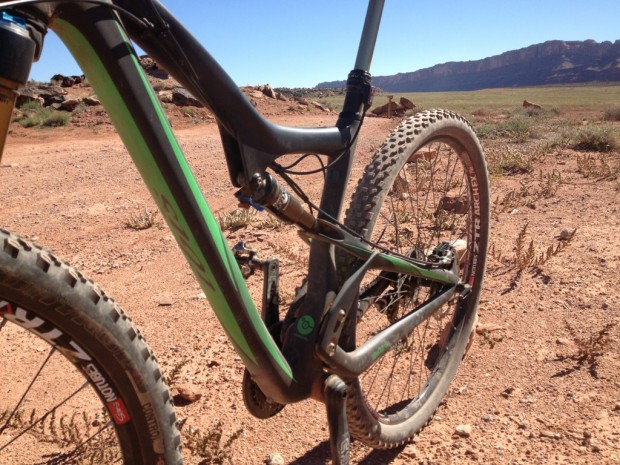 However, as is the case with the 26in Mojo, this aggressive suspension and design comes with a very cross country-oriented geometry. In the 120mm configuration, the headtube angle is a relatively steep 70 degrees. Now, that’s not too much steeper than bikes of similar travel lengths from other companies, but it does showcase Ibis’s desire to create great-pedaling mountain bikes that are more than capable of getting freaky in nasty terrain.

In actual practice, the pedal-friendly geometry, coupled with the fantastic suspension, light carbon frame, and low overall weight made for a very lively, fast rig. The Ripley didn’t climb like I expected an aggressive trail bike to: it climbed more like a lightweight 100mm race whip.

According to Ibis, their “goal was to bring the advantages of a 29” wheel to a lightweight, nimble and fun trailbike.” Well guys: mission accomplished. Ibis continues to defy expectations by packing a very pedal-friendly bike into an aggressive, capable package, all at a supremely low weight. Start stuffing your pennies into your piggy bank jar today.

Awesome review…I would love to ride one.

Well, it did make Brian Lopes eat crow and become a believer: http://www.leelikesbikes.com/brian-lopes-testing-29ers.html

I have been looking at a Trek Stach 7 or 8, any opinions?