Out on the Trail: Helena’s Take

Off the bat, I was very impressed with the light body. It is compact, lightweight, and sleek. It’s easily chargeable via any micro USB, and I found that the 2.5-hour charge time claim is indeed accurate. You decide in the mid-afternoon that you want to go for a night ride later, but your lights aren’t charged? No problem at all. Plug it into your computer at work and it’ll be ready to go by the time you are.

At first glance, the mounting system seems really nice. An adjustable rubber strap and curved mount make it really easy to just slap this light onto the handlebars of any bike in seconds. As a bar-mounted light, for commuting, road riding, gravel, and doubletrack, it’s great! The only issue is that it can swivel on its mount, so if it bumps against something, the light moves, which can be a bit annoying. Hence why it’s better for roads and gravel, where there isn’t a lot around for it to hit. 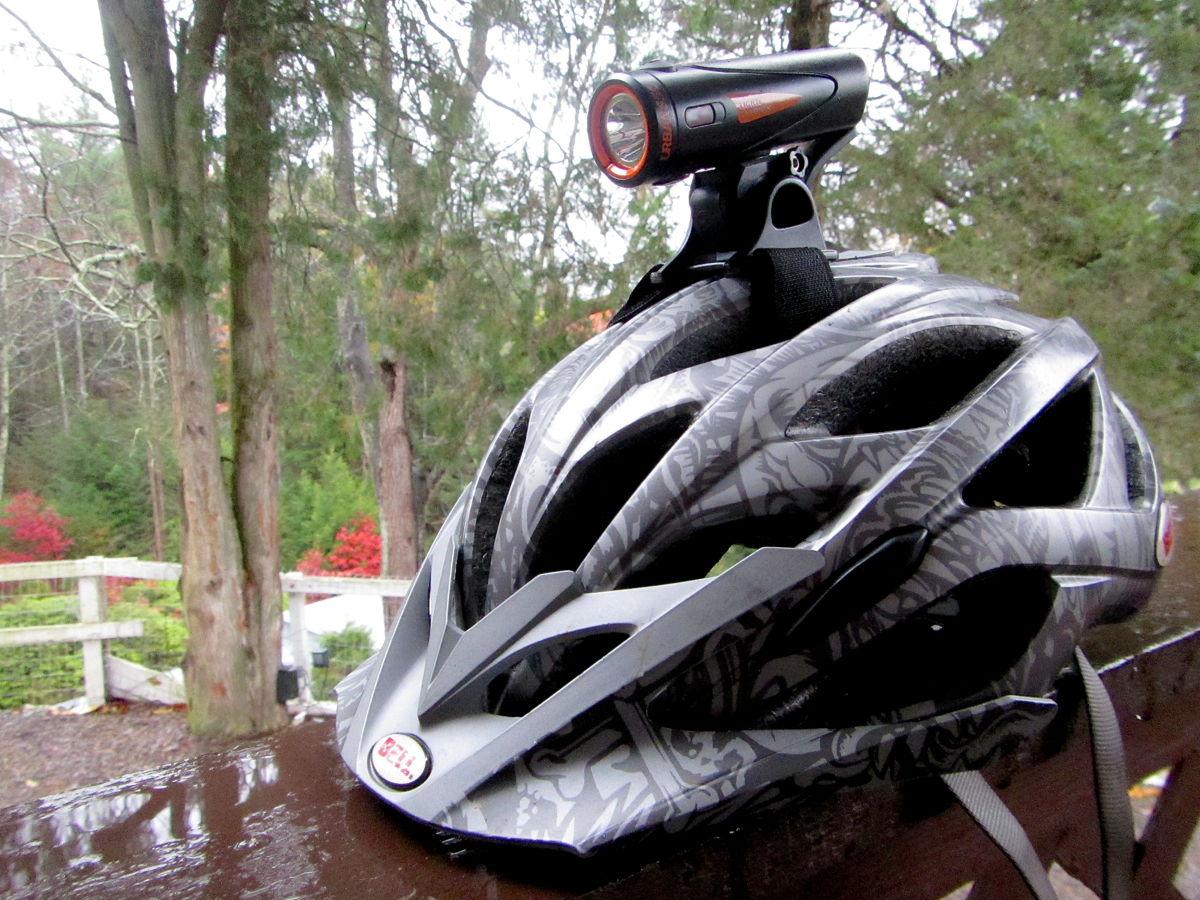 When I ride singletrack, I much prefer a helmet mount, as it’s easier to see around turns and to the other side of dips, drops, and rollers. The helmet mount for the Urban 850 is a round cylinder that is affixed to the helmet by velcro straps. The rider then straps the light to the cylinder just like to the handlebars. While this seems convenient, I found that this system didn’t work very well for me on rocky, bumpy terrain. First of all, the helmet mount itself doesn’t fit on my helmet very well. The piece that rests against the helmet is fairly flat, and my Bell helmet doesn’t have any flatter spots on it. So, with the weight of the light on the mount, it moves, as it does not rest flush with the helmet itself. I tried it on my husband’s Lazer helmet, and it seemed to fit better and more securely, so this seems to be just a matter of what helmet you have.

I also found that the light moves around a little on the mount, because while the strap system is convenient, it does not always keep the light from slipping down on bumpy terrain. I found that every so often I would have to reach up and push the light back to the position where I wanted it, which was a little tricky on continuously-rocky trails. However, on less technical trails, this wasn’t much of an issue.

Mount issues aside, the light beam itself is really nice! The high setting is just about as bright as I think I would ever need out on the trails (even though there are plenty of lights out there with far more lumens), and even the medium and low settings offer plenty of visibility for slower riding. The beam pattern is even and offers an ample amount of both side-to-side lighting and depth.

The first Urban 850 that I received for testing had some battery life issues—I would run it for 20 minutes or so on high with a full charge, and then it would suddenly die. Even on the lower settings, I could barely get an hour out of it. Light & Motion kindly replaced it, and the new light has been much better in the battery life department, living up to the 1.5, 3, and 6-hour run time claims.

All in all, the Light and Motion Urban 850 Trail is a great, compact, lightweight, self-contained light that provides ample visibility for singletrack and is simple and easy to use. I love that it’s easy to transfer from the bars of one bike to another, and it has become my go-to light for commuting, road rides, and gravel grinding. However, I’m not a fan of the mounting system, which is what currently keeps me from making it my go-to for singletrack. I find that the light moves a little too much to make it a great helmet-mounted light for rocky terrain, something we have much of here in Pennsylvania. Fix that issue, and I’ll totally be won-over by the Urban 850 Trail.