“Necessity is the mother of invention,” as the ancient saying goes. I’ll add a second layer to that proverb: “the greater the necessity, the better the invention.”

During my recent trip to Scotland I tested a unique chain lubrication product that was born out of necessity from the constant onslaught of wet weather and mucky trails. Another product that’s absolutely necessary for riding in Scotland is the rain jacket.

You may be familiar with a Scottish brand that is well-known for rain jackets and outerwear, and is distributed around the world–Endura. We’ve tested several of their products here on Singletracks and have always found them more than up to the task!

The need in Scotland for quality rain jackets is so great that it’s guaranteed that more than one company will try to invent out of this necessity, which is where Keela comes in. Keela has been around for 30 years, but they’re still a much smaller company than Endura. That doesn’t keep them from innovating and pushing the technological envelope, though. According to a recent press release, Keela “constantly researches the most advanced fabric technology available; the fabric systems we have developed improve the performance and wearer comfort, ensuring total protection from the elements.”

During my two rides in Scotland in November I had ample opportunity to see if the “advanced fabric technology” in their Saxon rain jacket was just hype, or if there was really something to this idea of necessity as a mother. 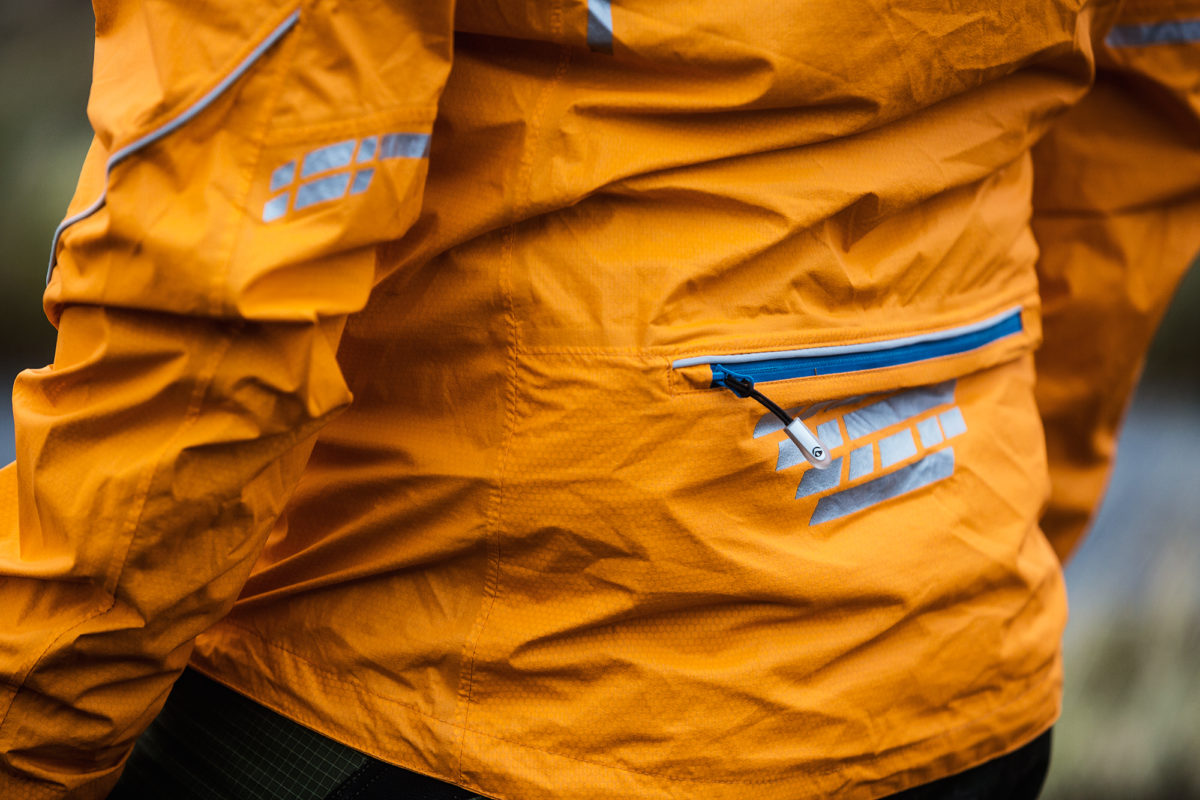 Unlike many of the shells and jackets that I’ve been carrying on my rides lately, the Saxon claims to be 100% waterproof and “capable of withstanding the heaviest of downpours.” The upshot is that the Saxon isn’t an ultra packable emergency shell–rather, it’s intended to be used in a deluge, something I generally try to avoid at all costs.

The Saxon is made of “Flylite Aqua fabric,” which of course Keela claims is “breathable.” It’s pretty tough to create a 100% waterproof rain jacket that’s also breathable, so take that with a grain of salt. 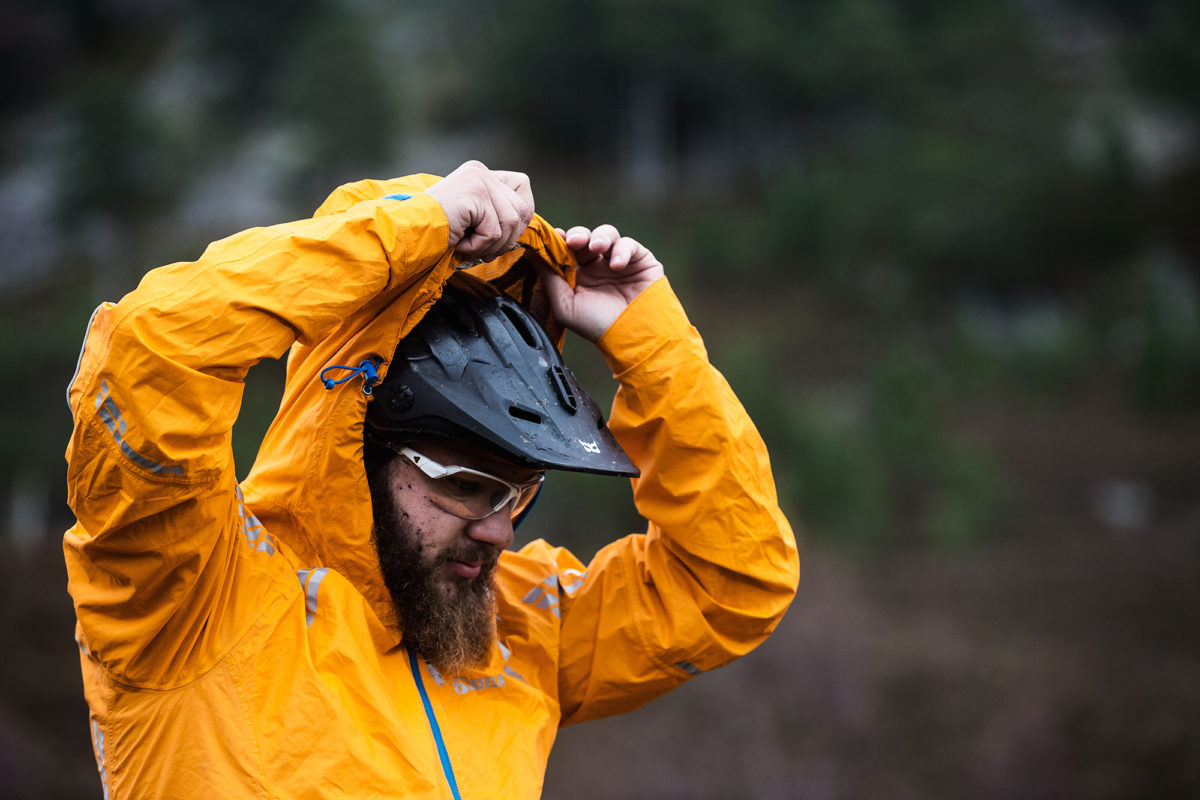 One critical rain jacket feature for true backcountry expeditions is the hood, and the hood on the Saxon is no ordinary cover. Designed specifically to go over a helmet, it features 3-way adjustments to get the perfect over-helmet fit and to stay in place in the midst of a storm. 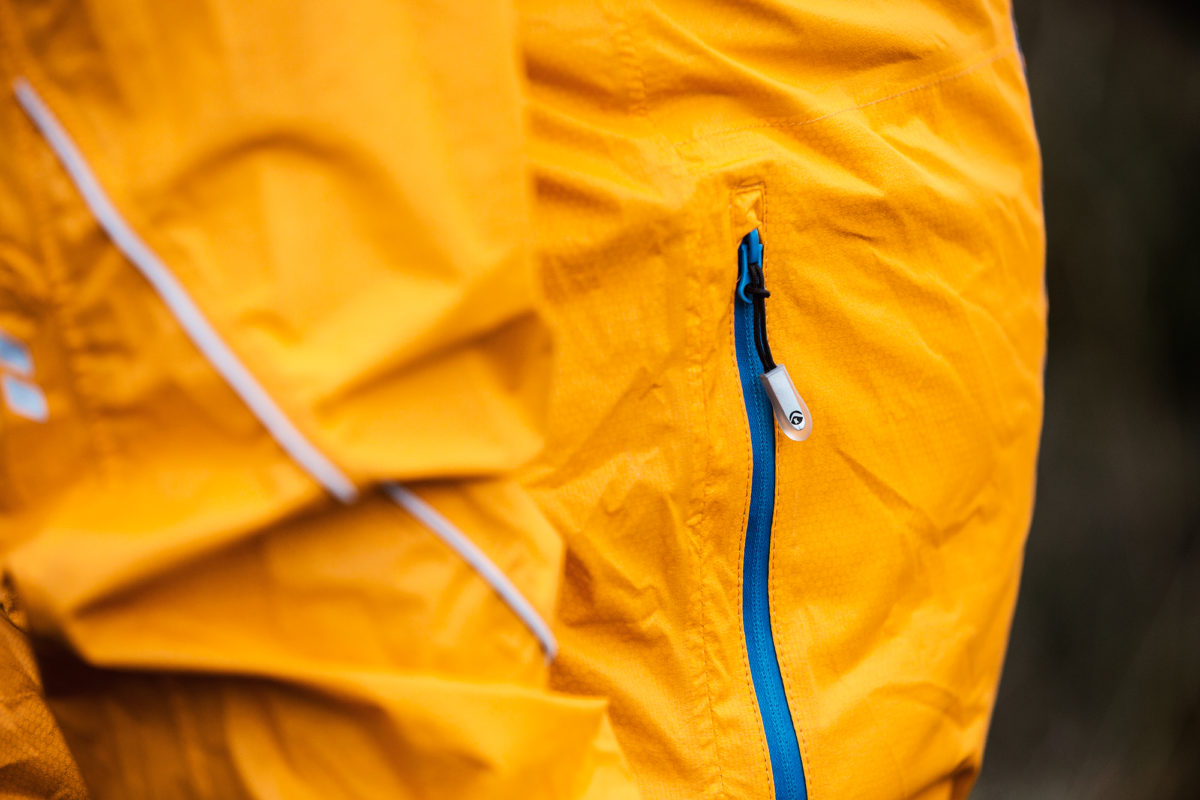 Despite being 100% waterproof and offering a hood, a full zip, and several zippered pockets, the Saxon isn’t heavy. Rather, the Saxon is extremely lightweight for the features it offers–0.26kg, or 9.17 ounces. To get a sense of how this stacks up against other rain jackets on the market, I compared the feature list and weight of the Saxon against several lists of the “best rain jackets of 2016,” and found that in general, to get a 100% waterproof jacket with a hood, full front zip, and pockets, you’re generally looking at right about 15 ounces. Some jackets come down near 11 or 10 ounces, but as they do the price ratchets up significantly.

That’s one final feature of the Keela Saxon that you need to know: it retails for £99.95, or ~$124.68. While perusing the lists of the best rain jackets, I spotted the Patagonia M10, which weighs in at 8.1oz, and was dubbed by Switchback Travel as “the lightest hardshell on the market.” The catch? For one ounce of weight savings over the Keela rain jacket, you have to pay an additional $275! That’s right: the Patagonia M10 retails for $400 MSRP.

(Note: There seems to be a bit of a dispute about the actual weight of the M10, with Switchback Travel (and others) listing it at 8.1oz and the Patagonia website listing it at 9.4oz. Also, it’s difficult to ascertain that I’m creating a true apples-to-apples comparison here, as in addition to lower weight it’s possible that the more expensive rain jackets could offer some additional features that the Keela Saxon doesn’t offer, like pit zips and additional ventilation. So take these comparisons with a grain of salt. But the takeaway is, this is a great weight for the price.)

So I’ve already identified that the Keela Saxon is feature-rich, claims to offer top-notch waterproofness, and actually does offer an incredible weight at a great price. The only question is, will the performance match up with the specs? 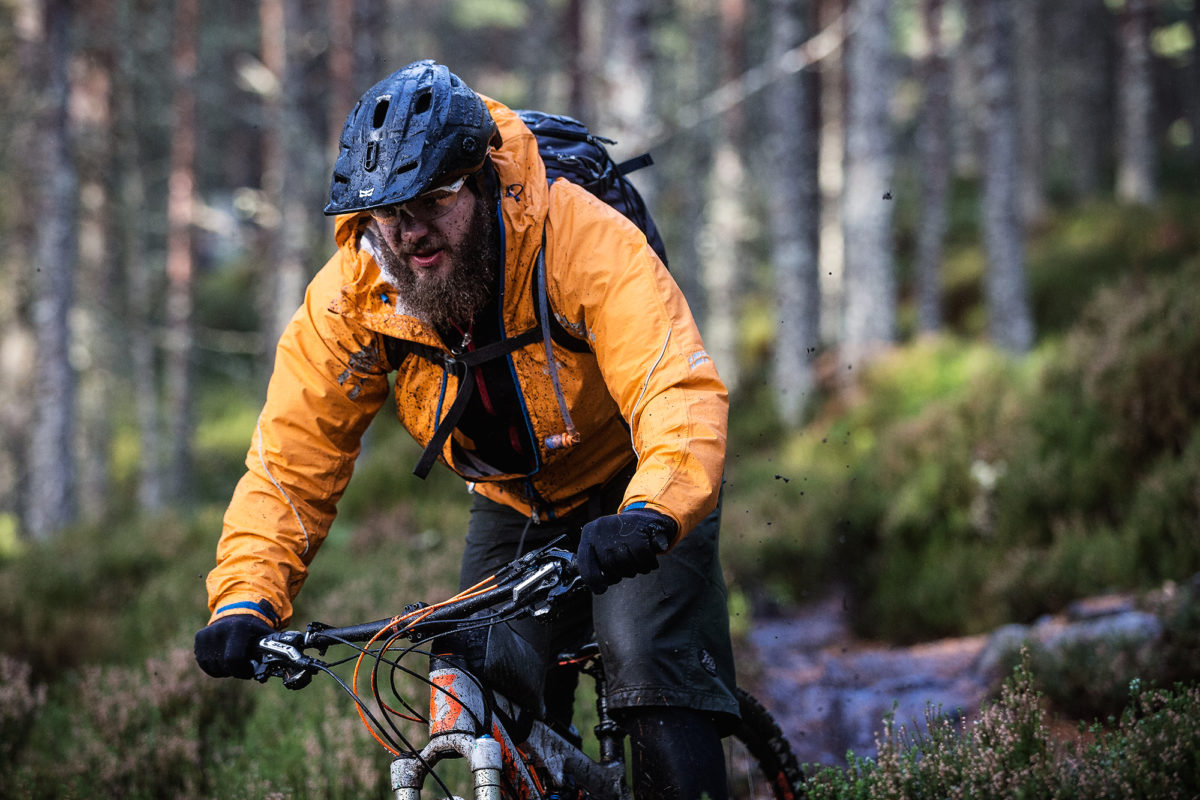 While two days of mountain biking in Scotland might not seem to be enough time to review a rain jacket, when I tell you that I spent more hours in those two days slogging away in rain, sleet, and snow than I generally do in an entire summer of riding in Colorado, hopefully that perspective shifts rapidly.

(Get the blow-by-blow on my two days of riding in Scotland here and here.)

While the occasional ray of sunlight graced our passage through the wilds of Scotland, in general we were pedaling under gloomy skies that alternated between merely threatening rain, to delivering on that threat. The real challenge came on our second day as we attempted to ride a Scottish Corbett. A squall moved in as we were hike-a-biking above tree line, bringing with it an onslaught of moisture–mainly heavy, wet snow. We ended up pulling the plug on our ride, which turned out to be an excellent decision.

As we descended quickly down the mountain back the way we had come, the squall that our guides spotted moving toward us landed in full-force, dropping heavy, wet snow at well over an inch an hour. As we descended down the mountain, I quickly lost feeling in my feet, my fingers, and even my legs began to go numb as the the thick snow hit and melted through what I had thought would be a sufficiently warm layer. Despite insulation, without a waterproof pant my thick tights were no match for the rapidly-melting snow.

However, for my upper layer I was wearing the Keela Saxon. As we descended down the mountain, the rest of my body getting soaked through, the snow built up on the outside of the Saxon, quickly reaching a quarter inch deep of heavy, melting snow. Despite my orange jacket turning white, I was completely warm and dry on the inside.

Resisting a rainfall is one thing. The rain hits, and bounces off. Some jackets are only rated for a certain pounding of rain, and fail as the intensity increases. While a pounding rain can overcome a jacket’s defenses, I don’t know if there’s a more penetrating type of moisture than a sopping-wet wintery mix accumulating on your body, and just sitting there melting and trying to find any means of penetrating your defenses.

Despite what I considered to be one of the most daunting challenges a rain jacket could face, the Keela let absolutely no moisture through and kept my torso completely dry. While I had already been impressed by the jacket in the rain and mud the day before, I was completely sold on this shell by the time we reached the cafe for a coffee at the bottom of the mountain. 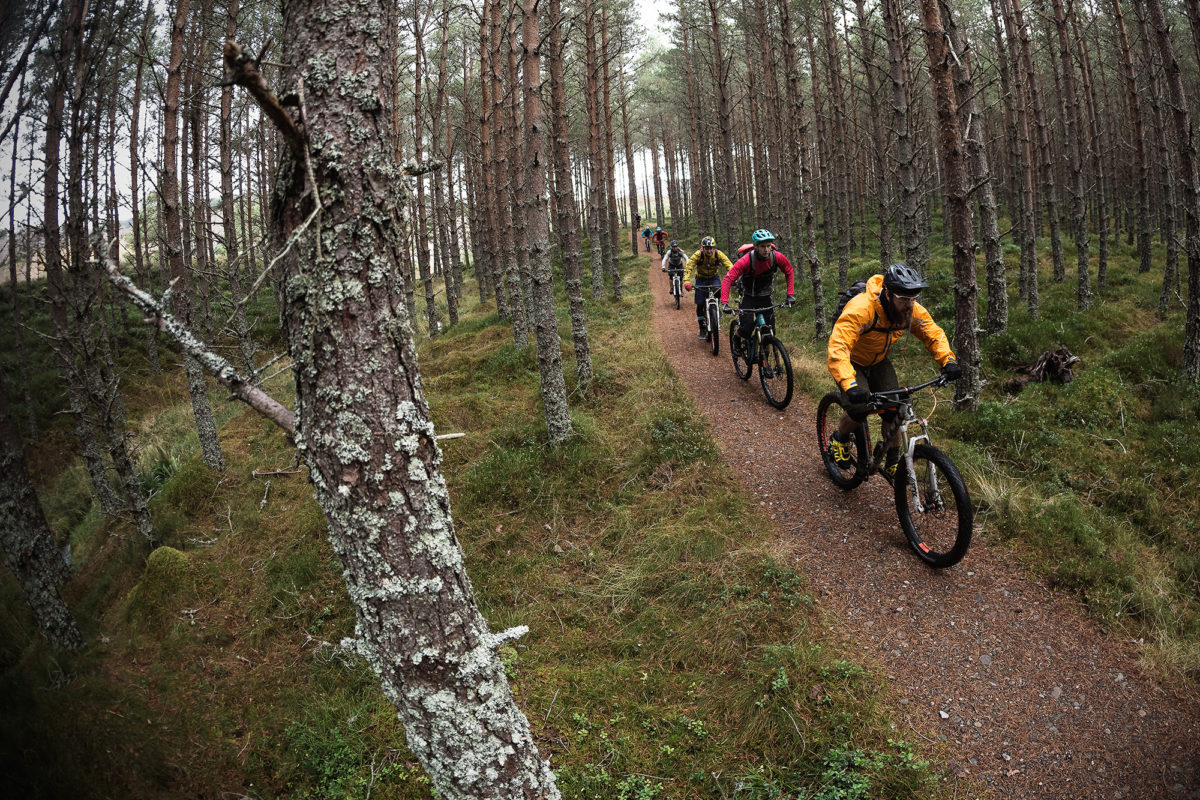 The Keela Saxon rain jacket offers an incredibly light weight and an excellent array of features at a very affordable price. Not only that, but its performance in even the harshest conditions rivals any jacket I’ve ever worn.

While the Saxon isn’t packable enough for me to carry it all the time (especially when I’m not likely to encounter any serious rain), it will undoubtedly be my inseparable companion for true backcountry forays like multi-day bikepacking trips.

So is necessity really the mother of invention? If the Keela Saxon rain jacket is any indication, I think “yes!”

Thanks to Keela and Developing Mountain Biking in Scotland for providing the Saxon for review!

Nice jacket, and a few cool shots of you Greg. It looks like you might have a career in outdoor gear modeling ahead of you. =)