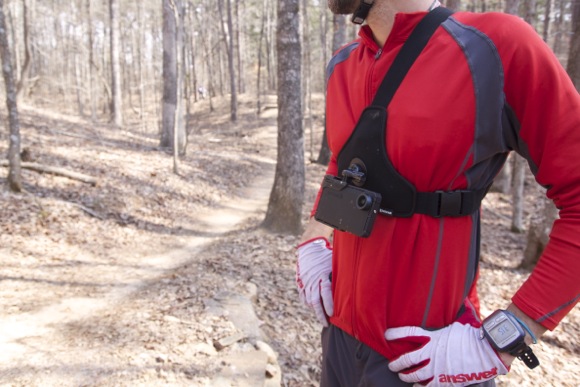 The Hitcase Pro and ChestR transform your iPhone into a trail-worthy action camera, ready for almost any moves you can throw at it. No need to pack a helmet camera for your next adventure–just mount your smartphone and go! I recently tested the Hitcase Pro for iPhone 5 and this is my review.

If the idea of leaving your iPhone exposed out on the trail makes you cringe, rest assured: the Hitcase is both waterproof and padded to absorb shock. The case is burly and features three clasps to hold the phone in tight while maintaining access to all the buttons on your phone. The tight fit is important in more ways than one–it also ensures your video comes out shake free. 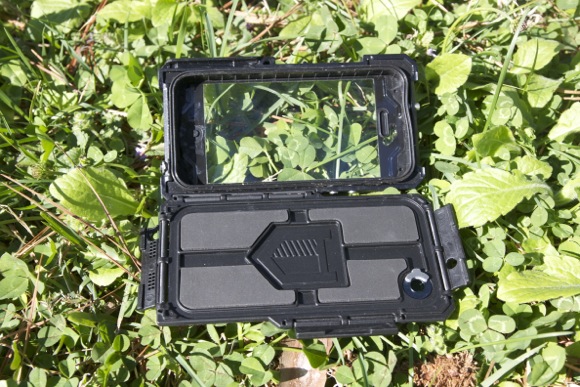 The clear plastic screen protector is thick and I found it does require extra pressure for swipes and taps to register. Using with gloves was hit or miss for me but your mileage may vary.

Beyond protecting the phone, the case adds two critical action camera features: a wide angle lens and a mounting system. The wide angle lens sits over the iPhone’s rear camera and in my tests it was as clear as a bell. By extending the iPhone camera’s field of vision, the lens captures all the action on the trail. The case does cause audio to come out muffled but the upshot is less wind noise is recorded when you’re bombing the trail.

The Hitcase Pro uses a “Railslide” mount that works as the name implies. Just slide the case into the mount until it clicks; press a small button to release.

The Hitcase Pro includes a GoPro-compatible Railslide mount which means you can use all your existing GoPro mounts. There’s also a StickR mount included in the box for mounting to a skate-style helmet. Both mounts use a screw which allows you to set the angle of the camera.

I also tested the ChestR chest mount for Hitcase Pro. This is basically a 3-strap harness with a hard plate for mounting the camera for a slightly different–and more stable–perspective.

Admittedly I haven’t had a lot of success with helmet cameras–they’re usually difficult to mount, produce shaky video, and are unreliable in changing light conditions. With the Hitcase I encountered none of those issues. 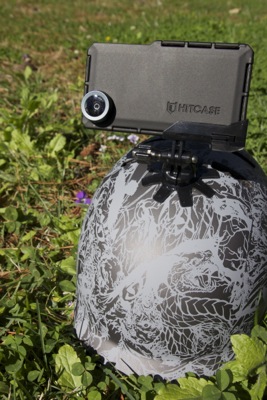 Hitcase was smart to skip the vented-helmet mount and opt for a skate-style mount right out of the box. On my skate-style helmet, the Hitcase stayed put and didn’t wobble too much (helmet fit has something to do with this as well). It does, however, stick up above the helmet much higher than a dedicated helmet camera like the GoPro or Contour. I whacked my phone on a low branch at least once–and I was trying to be careful! Fortunately the Hitcase did its job and protected the phone but my footage definitely suffered. It’s possible to place the StickR mount closer to the front of the helmet (as opposed to the top) which can get the package a bit lower on your head.

The ChestR mount proved to be my favorite option by far. It was easy to get the chest plate  mounted, though it would have been nice to see an offset on the vertical strap (I suspect most folks are like me and have a head in the middle of their shoulders).  Despite this, the mount is surprisingly comfortable and I was able to wear it for hours during rides.

Like any action camera, getting the lens angle dialed in can be a challenge. The good thing is it’s easy to review test footage on the trail on your phone’s screen! My first few videos ended up being pointed too low and the only way I could get a high enough angle on the bike was to flip the Railslide to the bottom of the ChestR (see photo at the top of this article). Unfortunately there’s no easy way to view the phone screen in this position but on the plus side, the video came out great.

With the mount turned the other way (Railslide on top) I found the ChestR to be great for using my phone’s navigation features. Mounting a smartphone on mountain bike handlebars means the phone gets rattled around all day plus it’s hard to see details on the screen from far away. The Hitcase and ChestR places the phone close to your face and protects it from vibration.

Hitcase offers a free app called Vidometer for recording video while tracking speed, altitude, and even G-forces during the ride. I used the built-in iPhone camera app for my tests but you can use any video app you like. Even night ride videos turned out great.

If you’re thinking about getting a helmet camera, take a look at the Hitcase Pro ($129 MSRP) and ChestR ($49 MSRP). In a lot of ways your smartphone offers more features than even the most expensive helmet cameras–GPS, accelerometer, 3G connectivity–and a high quality camera to boot. The Hitcase Pro lets your smartphone do its thing on the trail while protecting it from being smashed to bits in the process.

Thanks to the folks at Hitcase for providing these items for review.

So let me get this straight: ~$180 just for the mounting hardware…and I thought $40 was ridiculous for a GoPro chesty strap!

Yeah, the case itself is spendy. Still, for folks who don’t have a dedicated helmet cam but do have a smartphone it might be a good option to save a few bucks overall.

Nice, glad to hear that someone has made a smartphone video mount that ACTUALLY works! Does sound a little spendy, but I would be happy to know that it’s a quality mount that will perform well in actual use.

That looks pretty awesome. And when you stop on the trail to get snap shots for singletracks.com you get them with the wide angle lense!

I am impressed with the clarity of the video. Yes the case is spendy, but when you dump as much into a phone, when not get more use out of it?

spendy maybe, but it will be imitated soon enough.

i prefer chest mounted videos to helmet due to the near fish-eye wide angle lenses on these camera systems. however, the go-pro chesty is so shaky it gives poor video when the action gets interesting. this iphone setup seems much more stable.

can’t understand why go-pro doesn’t incorporate an image stabilization system like almost any point-and-shoot camera has. go-pro may have to up their game after seeing this video.

After uploading this video to YouTube I saw an option on there to automatically smooth out the video. Is this a new option? I opted not to just to show how the raw video came out but it seems like a nice feature…

Expect to see more footage from this set up, including night riding!

thank you. i will have to try the smoothing, i hadn’t noticed that on youtube before. but seems it would be harder to do it after the fact (via sampling?) than in the camera.

your video with a chest mount was about as steady as a helmet mount. that’s impressive.