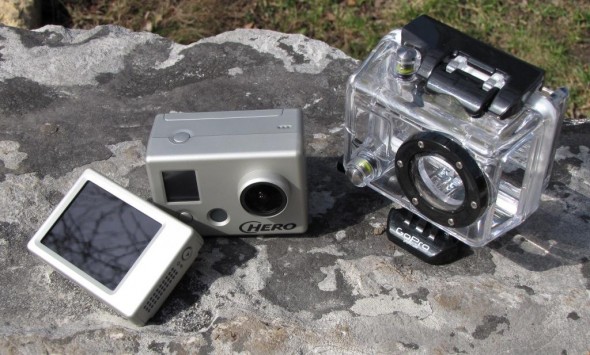 More and more people are using small video cameras to capture the action on the mountain bike trail and last year I wrote about the GoPro HD helmet camera. I’m still loving the camera but even more so now as GoPro continues to step it up in this highly competitive market.

GoPro recently added some premium upgrades to the Helmet Hero HD including an add-on LCD screen called the LCD BacPac and an extended battery called the Battery BacPac. Yes! Now you can preview your shots on the trail or add on a second battery that nearly doubles your shooting time. This really extends the capabilities of this camera, making the GoPro a go-to piece of equipment.

The LCD BacPac comes in a complete kit with the LCD unit and four rear housing options that should cover just about any situation you may encounter (two waterproof and two skeleton doors). For mountain biking I used both the waterproof and skeleton housing since the skeleton tends to pick up better sound.

More than likely you’re going to have to update the firmware on the GoPro if you purchase either BacPac unit. The easy part is downloading the firmware upgrade from GoPro. Do yourself a favor and have your PC handy and follow the tutorial they provide on the site while upgrading the firmware. It is highly recommended to format the SD card and have it blank before loading the updated file. I found I had to follow the directions twice to get it right but rest assured in the end it will work. Once everything was installed on the GoPro, I had no problem getting back in business. 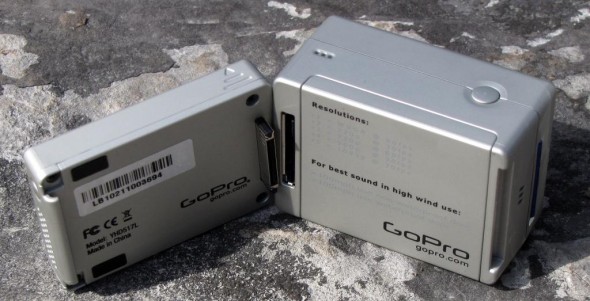 With the LCD BacPac you still get the same great performance when shooting but it’s so much easier to frame your shot. The LCD screen can be turned on and off whenever you need it so I tended to keep the LCD on only when framing. If you decide to keep it on, the screen will consume the battery more quickly and will reduce your shooting time.

Beyond framing shots, the playback feature is super helpful as well. Now I can decide on location if I want to keep the last video I shot which is great if I’m running low on SD card space. Playback features include fast forward, normal speed, and fast reverse for both video and photos. I found that I stumbled a bit at first getting all the buttons sorted out when in playback mode so I kept the instructions handy for a while when using the LCD.

Go Pro probably has the most extensive wearable camera mounting solutions around (I counted more than a dozen on their website). So far my favorite mounts are the Chesty, which holds the camera firmly in place right at chest height, the bar mount, which can be placed in many positions on the bike including the handle bar and seat post, and finally the good old helmet mount. All of which, when mixed together during an epic session, will give you some interesting perspectives and cool videos. 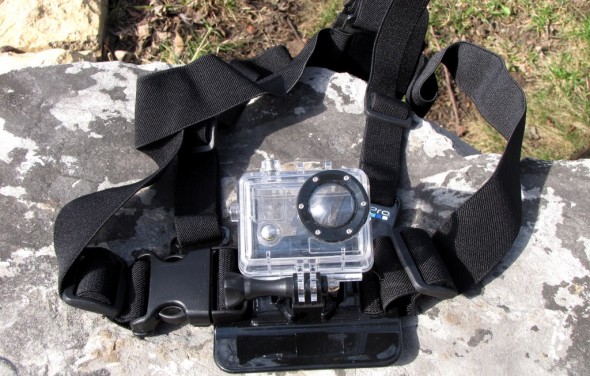 Lately I’ve been finding myself using the GoPro more and more, even for photos. Heck last month on a trip to Jamaica with the family I used the GoPro for everything. It took great underwater shots thanks to the waterproof case. You can get the LCD kit for about $80 and the Battery BacPac for $50. With either one you’re getting a bunch of flexibility and added functionality on an already good product. 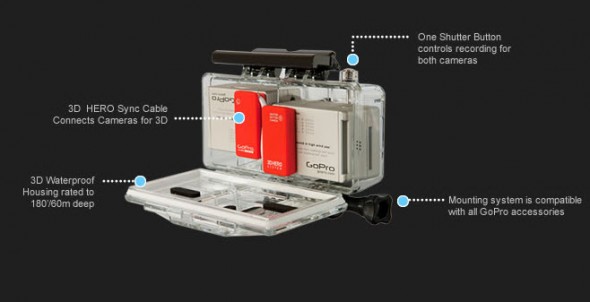 And as if that weren’t enough, GoPro also just released is the new 3D Hero System. I don’t have my hands on one of these yet, but for those of you who are really interested in making eye-popping video and already have a GoPro HD (or two!) this may be of interest. Yep, you’ll need two 1080HD cameras on top of the 3D kit, which sells for $99 by itself. All in you’re looking at about $700 for this 3D video set up which isn’t too bad considering how much it cost to make Avatar. 🙂 Plus this set-up will be able to go anywhere you dare.

Check out the GoPro website if you have a minute and take a look at all the options. There’s even a daily giveaway contest on the site with cool videos of products in action.

Thanks to the folks at GoPro for providing the accessories camera accessories for review.