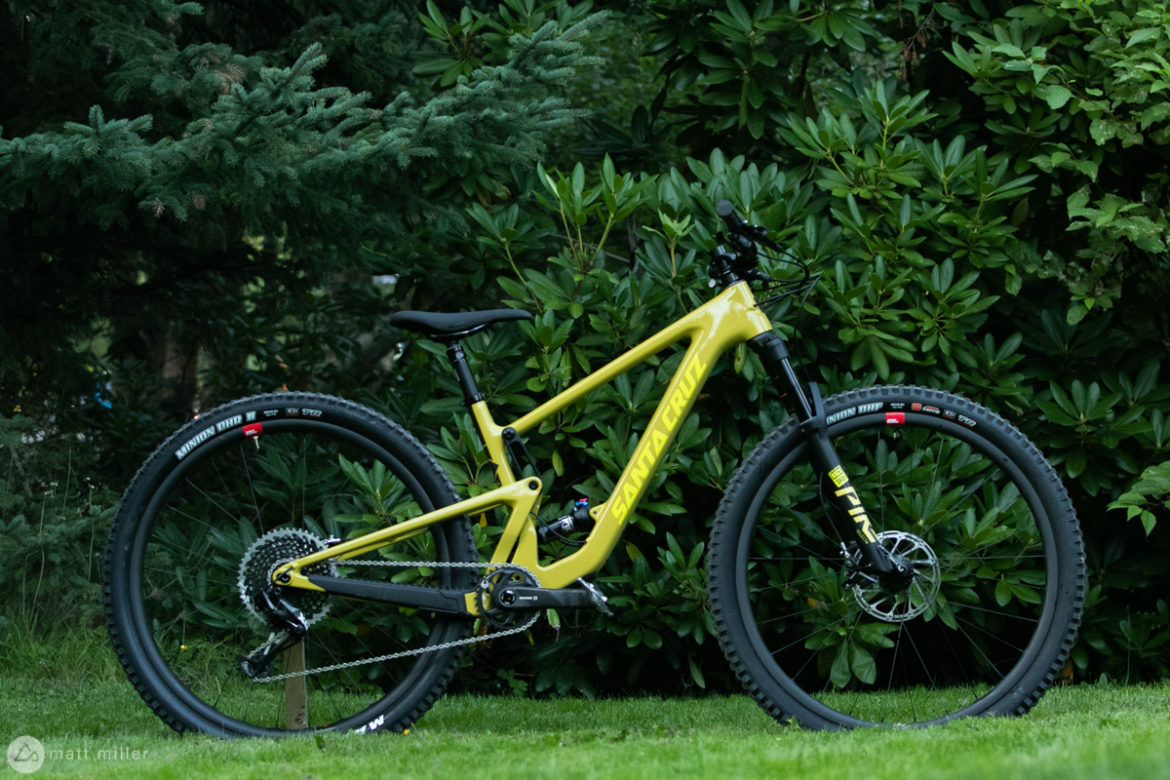 Over the course of the past two years, Santa Cruz has updated its trail bike line-up to utilize a DH-inspired, lower linkage suspension placement. The all-new 2020 Santa Cruz Tallboy looks like it will be the last bike in the brand’s lineup to get the lower shock treatment for the foreseeable future, and it appears to be worth the wait. (The 5010 was updated last year, but Santa Cruz kept the shock up high).

The Tallboy has been a go-to XC bike for years and years, but deep inside, its edgier trail personality wanted to take over. By adding the Blur back into the line-up, Santa Cruz was better able to fill the trail bike category left between the new 100mm XC-minded Blur, and the heavy-hitting trail bike, the 140mm Hightower, both 29ers.

The new Tallboy distinguishes itself from the previous version with more travel and much slacker angles. It still keeps a smaller travel spec for go-far XC pedaling, but is now more ready for steep and technical descents than ever. 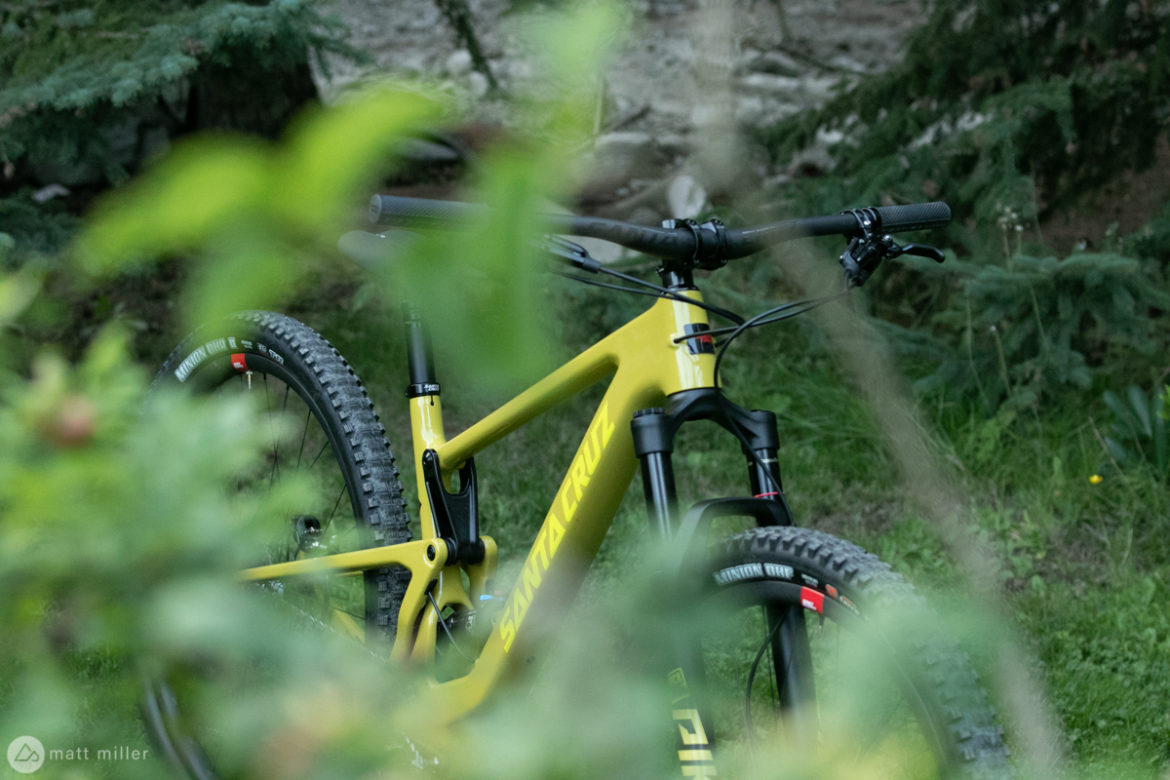 The new Tallboy is really a do-it-all trail bike. With 120mm of rear travel it’s meant for pedaling long distances, but with the geometry update, it makes you wonder just exactly what it’ll do.

Ten millimeters of travel have been added to the front and rear suspension, respectively putting the travel at 130mm and 120mm. The frame can fit a water bottle inside in all sizes (including XS), is available in carbon and aluminum, and has a lifetime warranty and free lifetime bearing replacement. 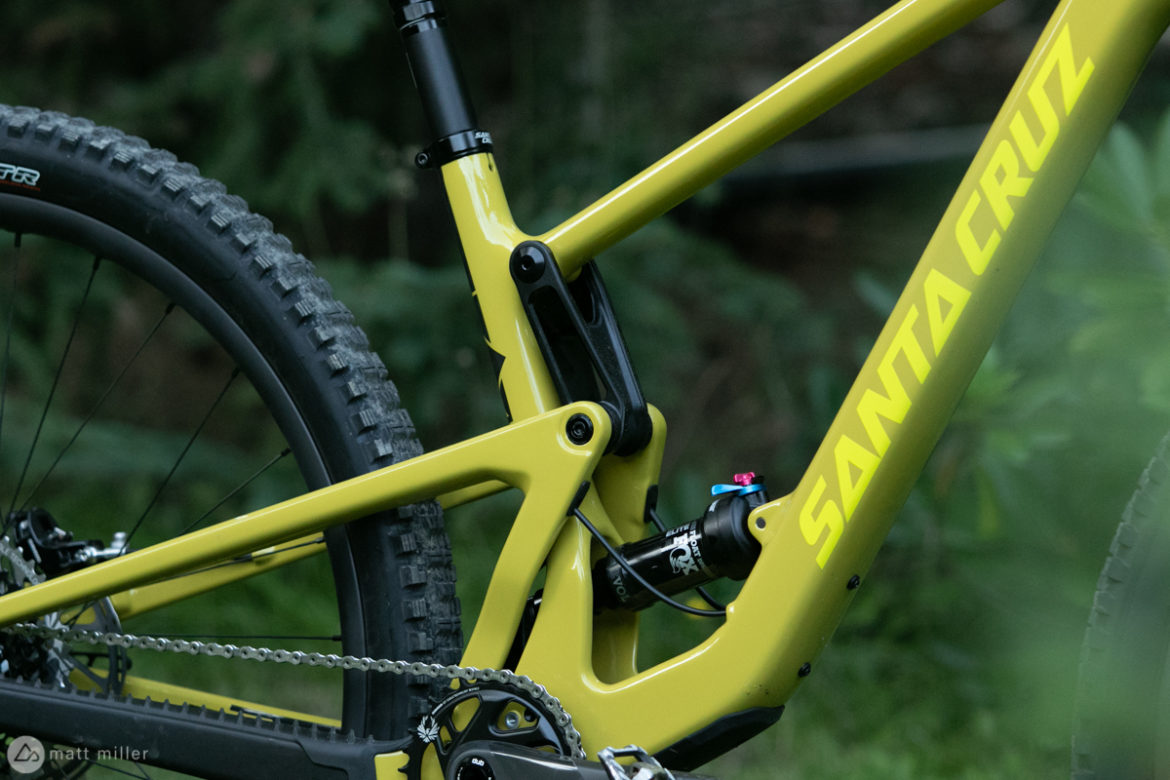 Just by looking at the new Tallboy it’s easy to tell that this thing is going to be more capable than the previous version. The reach has grown about 20mm across all sizes, and the head angle relaxed by two-and-a-half degrees, while the seat angle steepened by a whopping three-and-a-half degrees.

The wheelbase has grown by about an inch-and-a-half (40mm) and the standover height has dropped by 10-14mm, depending on the geo mode. In the shortest position, the chainstay is 2mm shorter than the previous, but it is also adjustable and can be made longer — up to 440mm. The bottom bracket height actually crept up by 2-5mm, and the stack height stayed just about the same. 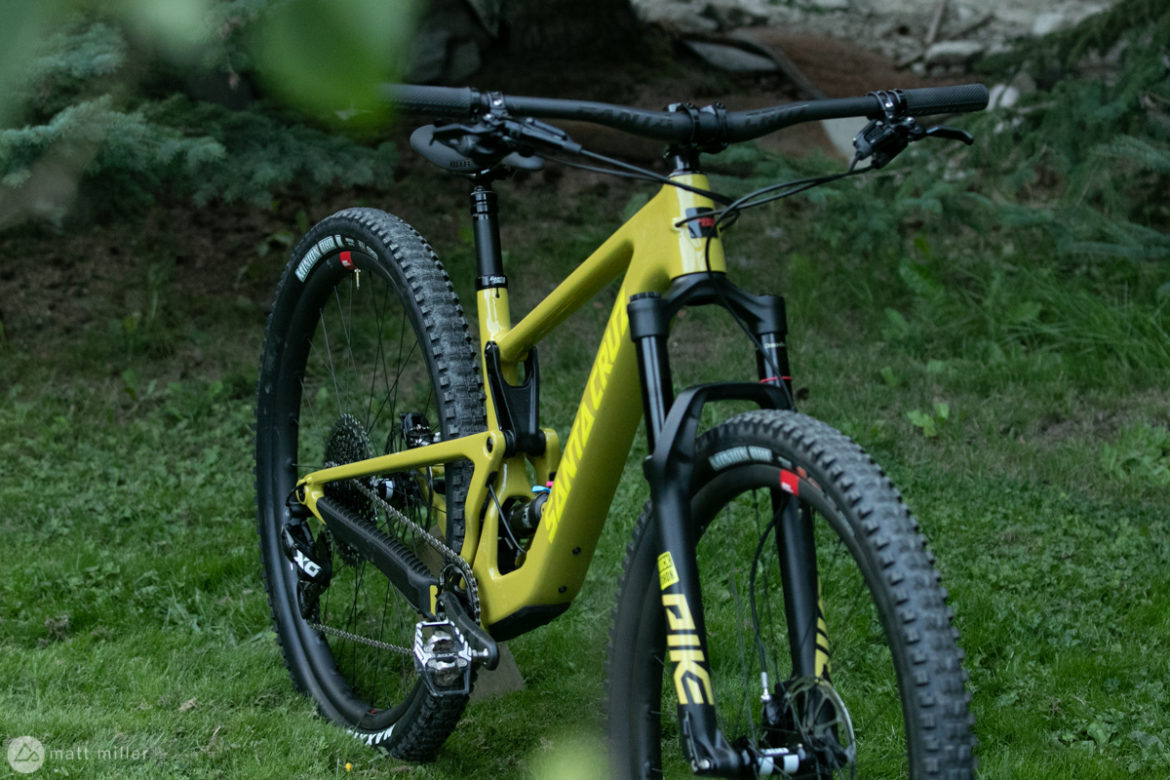 At the base level, the AL D build sells for $2,700 and has an aluminum frame, a Fox Float Performance DPS rear shock, a RockShox Recon RL fork, SRAM SX Eagle drivetrain and Level brakes, and WTB i25 rims with SRAM MTH hubs.

I spent a few days on the CC XO1 RSV build, with a crisp XO1 drivetrain, and the Santa Cruz Reserve carbon wheels.

The Tallboy is made for everyone in terms of sizing and can be had in an extra small frame all the way up to an extra, extra large.

During a bike testing extravaganza for Crankworx Whistler, Seb Kemp from Santa Cruz handed off the new Tallboy to ride for a few days before the release. I’ve been riding mostly short-travel XC and trail bikes this year, and was ready to get enduroed out for a few days in Whistler and skip the short-travel rigs and the climbing.

But, as he filled me in on the details of the new rig, my interest climbed higher. The Tallboy is now more of a trail bike than the previous endurance-minded model. And, it’s a trail bike that with the updated 65.5-degree head angle, riders can take on some fairly ridiculous trails. With the newly-placed VPP suspension, the bike looks and feels more aggressive than the old one, and it opens up space for a bottle cage.

On my first ride aboard the 2020 Tallboy, I pedaled over to a small network of trails called ‘Cut Yer Bars.’ The name gives you a hint of what to expect and the trails are indeed narrow at times, but there are also jump lines, big and steep rock slabs, a few chundery descents, and some solid and steep technical climbing. The longest trail is just over a mile, and the rest are all about a quarter to half-mile. They offer a good, yet short and navigable taste of Whistler, BC riding and I highly recommend them.

The Tallboy’s suspension creates a firm pedaling platform across settings. I switched back and forth between pedal and open mode on the Fox Float rear shock. On sustained climbs, the pedal mode felt nice and firm, but on the Cut Yer Bars trails, the open mode was ideal for short climbs and descents where it was easy to forget that the shock was left wide open.

I was most curious about how the enduro geometry would feel on a 120mm-travel bike, and figured that while climbing, the front wheel would wander around like a lost boy at Disneyland. There is a hint of that, but the handling is pretty impressive. Surely, the 76.4-degree seat angle helps add weight to the handlebars and keeps them in line.

I got a taste of what the Tallboy was capable of at the Cut Yer Bars trails, but the best came from a ride on Microclimate. Microclimate is located across from the Whistler Bike Park on the Blackcomb trails and is accessed via a fire road. In a little over a mile, the trail descends about 1,300 feet and is very steep with an average grade of around 19%.

I kept the Tallboy in pedal mode up the fire road and chugged along, then I opened up the suspension before dropping in. Immediately, the slack head angle made me comfortable descending the loamy chutes and steep rock rolls. The trail made a great place to feel out the VPP’s ability to soak up small bumps from the millions of roots that engulf the trail, followed by a few drops and bigger bumps.

It was only after hitting some steep, fast, and successive drops that I was reminded that I was only riding a bike with 120mm of rear travel and a 130mm fork. Sure, I would’ve been more comfortable on a Hightower, Nomad, Megatower, or heck even a V10, but it was pretty impressive how apt the Tallboy is for a trail like Microclimate.

After only a few rides on the new Tallboy, I left with a very positive impression and really dig the new take on an older title. The Tallboy feels very category-blurring and like the perfect example of what happens when a brand blends new-age geometry, kinematics, and suspension capabilities.

I really like these new short-travel progressive-geo 29er Trailbikes and especially so, if they have frame/fork clearance for 2.6 tires. The Ibis Ripley, 2020 Trek Fuel EX, and now, the Santa Cruz Tallboy look like great all-a-rounders..

I would also like to see XC-bikes follow in the same way. A light-weight, effecient pedaling/climbing, progessive-geo,100mm front/rear travel, XC-bike with 29×2.6 tires on inner width i27-28mm rims is what I’m hoping to see some day.

However, the Ripley, Fuel EX, and Tallboy sure look sweet. Trailbikes have never been better.

Just curious if you can weigh in and lend your opinion on something I’ve been thinking about;
I’ve had my eye on the Rocky Mountain Instinct 140/140mm as a trail bike for Squamish/North Shore/BC riding. I’m 6′, 165lb, not a very aggressive rider but enjoy climbing and descending technical stuff. No drops or sending though. Now I’ve been seeing a lot of these new short-travel trail bikes recently and wondering if you feel these are up to the terrain in BC, or if one would be better suited with a little more plush (140/140mm). Bikes like SC Tallboy, Giant Trance 29, Ibis Ripley.

Hey Jonathan, good question. Hard to say…From my experience riding in BC, it depends. I did BC Bike Race and rode a lot of stuff closer to Vancouver/Island and Squamish that the Tallboy would have excelled at. The geometry is there, for sure, and 120mm of travel covered most all of it. Up in Whistler however, most of the trails seem a lot rockier and more technical. I think I could get away with it if I lived closer to Vancouver since there looks like a lot more “BC XC” riding. In Whistler, I’d want more travel.