If you had a chance to look at my first article about the Diamondback Carbon Overdrive Pro 29er, you already know how cool it looks, and you know it has some seriously tasty parts fitted to it.

To quickly condense my impression of this bike, I’d say it is a lot more capable on the trail than I am. It’s so light and climbs so well, I almost want to apologize to it after I huff and wheeze my way up a hill. Everyone who sees it asks about it, wants to pick it up, and marvels at it.

Let’s get into some details, but first a bit of history.

Diamondback, a company that has been making bicycles since the late 70’s, decided to put their maximum effort into producing a carbon XC race bike, which is a radical departure from their previous bikes. I’m sure someone somewhere along the line told them they were crazy, and that it just didn’t make sense. But rejoice, friends, because Diamondback did it anyway.

Spoiler alert: awesome bikes cost money. This is an expert-level bike, and with an MSRP of $5,500 and a street price hovering in the $5,000 range, it has an expert-level price tag to go along with it.

Here I am being an expert on some expert trails while giving an expert hug to the Carbon Overdrive Pro 29er. Bonus: riding buddy Bob’s expert finger visible at top left.

At some point in history, mountain bike builders gathered at a meeting reminiscent of — not to mention visually indistinguishable from — the Entmoot, which was the gathering of Ents at Derndingle in Fangorn Forest, depicted in Peter Jackson’s Two Towers. Ents, by the way, are tall living trees from J.R.R. Tolkien’s world. They have beards nearly as long as the ones mountain bike builders grow.

This is particularly applicable where I live, on the eastern side of the US, where the mountains are relatively short and the trees grow relatively close together. In my neck of the woods, we are pretty much always steering our bikes. We like the kind of nimbleness the Carbon Overdrive Pro has. A lot.

The Fox 32 Float CTD 29″ fork has 100mm of travel, and a three-position remote lockout. You can have it fully squishy, somewhat squishy, or hard as airplane math with a twitch of your thumb. We’ve seen remote lockouts before, but this was my first experience with an extra middle setting, and I loved it. This is, after all, the age of infinite choice. Mountain bike forks are no different.

Here’s the lockout lever itself.

And the lockout windy thing on top of the fork: 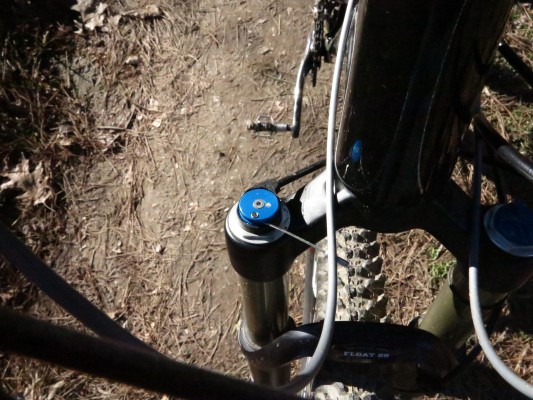 More of the Fork: 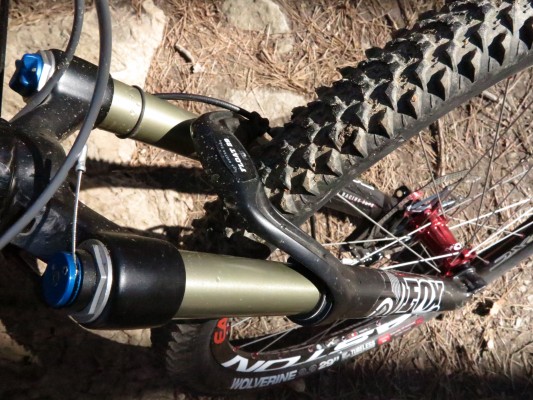 On the rear end, Diamondback have kept the rear triangle short. To quote the manufacturer’s materials:

The 440mm (17.3 inch) chainstays equate to an extremely snappy rig and the ability to easily get the front wheel off the ground – something that not all 29ers can boast.

If you were previously a 26″ rider and you have since switched to a 29″, you may remember the first time you tried to pop your 29″ front tire up over a root. Like me, you no doubt shifted your weight back a bit and hauled up on the bars to get that front wheel in the air, only to be rewarded by a bit of shock travel and a sharp bump as you drilled that root head on. The Overdrive Pro’s geometry aims to keep the front wheel easily liftable by keeping the rear tire tucked just a little closer up under the rider. I can confirm that the front wheel is easy to lift, but it comes up when I want it to, not when it wants to.

I’ve also ridden bikes whose front wheels were hard to keep on the ground under power. Usually I set my stem pretty low to keep more of my body over the front tire when climbing to combat this, but for all the Carbon Overdrive Pro’s liftability, it was stable and predictable for me on the climbs.

Diamondback knows that this is a proven frame design, because it’s one they have employed before on the aluminum Overdrive mountain bikes. But this time, for 2014, they are making those bikes in that most coveted of all bike frame materials: crabon fribé.

They have developed their own molding process, which they call Advanced Monocoque Molding Process (AMMP). Like all bike manufacturers, Diamondback is somewhat tight-lipped about the specifics of their molding process, but the upshot is that they mold the frame as a whole (that’s the “monocoque” part), all while keeping an eye on where they can use more responsive thicknesses of carbon, and where they need ultimate rigidity.

To me, the bike felt like it was hungry for pedal strokes. It’s stiff enough to transmit even my weak pedaling ability into forward motion, without being so stiff that it results in fatigue by juddering over every bump. Normally I slap a pair of big fat ergo grips on every bike I ride, but I forgot to put them on the Carbon Overdrive Pro, and I didn’t regret their absence even on longer rides.

Of course, the use of crabon fribé results in greater rideablity, but also lower total weight. As I mentioned in the former article, my LBS’s digital scale had the bike at 23.6lbs, but that’s with tubes in the tires — the Easton rims are UST ready — and with my heavy pedals. Someone with lighter stuff than me and a tubeless setup would see even lower numbers.

I let my riding buddy Bob take the Overdrive Pro for a spin a few weeks ago, and now he bats his eyelashes at the dang thing every time I bring it out. No word of a lie, the man has an actual crush on this bicycle. I can’t fault him there. I do too.

Here’s Bob jumping it literally centimeters into the air. 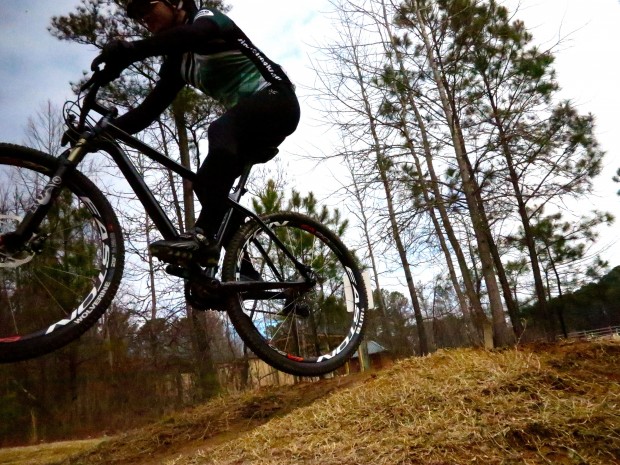 Here’s a fork-level action shot of the bike being pedaled by a Singletracks writer who isn’t smart enough to wear his Singletracks jersey to take photos of himself on a bike for a Singletracks article.

You can see here how understated the graphics are, which is super cool in my book. You can just make out the faint “Diamondback” on the down tube (much more visible in direct sunlight).

I think that if a Formula 1 team were to build a mountain bike, it would probably look a lot like the Carbon Overdrive Pro 29er. Here are a couple more photos to check out. Keep in mind that the dirt pictured here on the bike did not come with it. I had to add it myself. 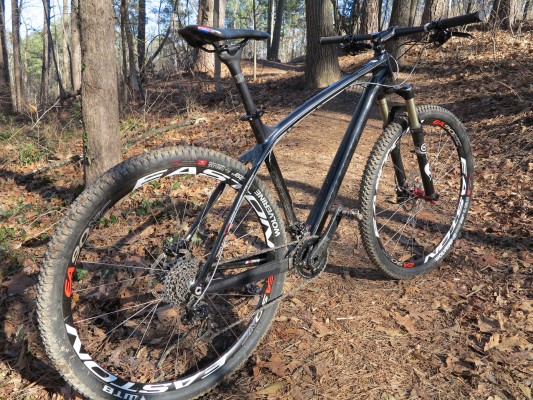 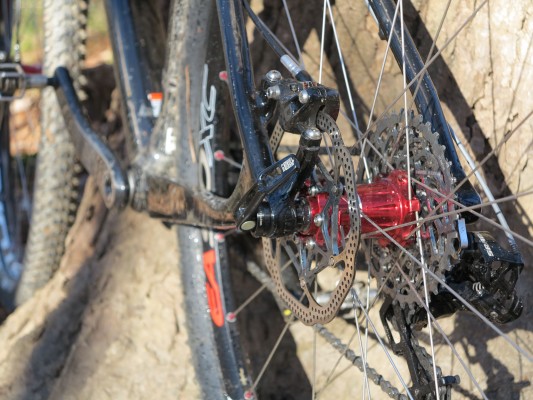 In fact, I loved it so much, I made an Epic MTB Edit OMG about it and put it on the YouTube. It features a song about Joss Whedon, by lo-fi is sci-fi called “Joss Whedon,” but most importantly, at only fifteen seconds long, it is exactly as long as any amateur MTB video ever needs to be. Prepare to have your face melted right off.

Thanks to Diamondback for sending the Carbon Overdrive Pro 29er over for review!

Nice write up. And sweet bike 🙂

What a great-looking bike!! I could go for a carbon 29er hardtail in my stable…. 😉

Yeah as you guys know I debated hard over carbon hardtail vs aluminum full squish when I bought my current bike, so having access to this rig was kinda heartbreaking in a “Woe is me I get to ride awesome bikes” kind of way.

Great review. Not only was it informative, it was entertaining as well. I am glad to see companies like GT and Diamondback get back into the high end bike market. You can never have too many options, especially when they produce bikes like this.

I do wonder if they made the “Diamondback” on the down tube understated on purpose? I think there is still a slightly negative stigma associated with owning a Diamondback. I could see someone seeing this bike in a bike shop and instead of being immediately turned off by the brand name, they see the bike, are impressed, and then after fawning over it see that it is a Diamondback and ultimately end up not caring because it is a very beautiful and well thought out machine.

Like I said I think they want to let the bike speak for itself. Plus it just looks cool. I’ve seen road bikes with understated carbon like this before, a Parlee, I think, and it just looks so cool.

Personally, I don’t think there is a negative stigma around the name. Diamondbacks were the bikes to have when I was a BMX kid. Why not now?

I definitely think it depends on what generation you are from. I am 28 and started mountain biking in college. So, I have only ever known Diamondback as the bikes you see in Dick’s and Sports Authority. While I always knew that there was a good history there, I still associated them with department store bikes.

Excellent review. Loved the video, though I would have cut it to 13 seconds, maybe 14.

Nice write up Jim, and as usual, very funny. My wife has a Niner Air 9 carbon and I think the geometry is very similar. I love that thing.

I like the extra pictures you put in the article..very cool.

Hey, by the way, if you guys haven’t read Jim’s book, “How to Mount Aconcagua” you should pick up a copy. He is a budding cyclist, mountaineerererer, and sophomore smart-ass.

Budding? Hah! I’ve put in many a mile my man.

(Thanks for the plug though)

Thanks for the excellent reviews! Do you have any insight into how this frame compares to the aluminum Overdrive frame in terms of weight and absorption? I’m trying to decide between the Overdrive Pro and the standard Overdrive Carbon. Thanks again!

It’s hard to find good, reliable numbers but my barely-informed opinion is you could see as much as 4-5lbs difference, maybe more.

About 6 years ago got to demo a bunch of bikes for Outside Magazine. One was a Diamondback and it did really well in the tests. I was pleasantly surprised how well it rode along with the other high end bikes.