Yeti has just announced the release of their new AS-Rc cross country bike. Featuring 100mm of rear wheel travel and a 120mm fork, this is the first XC offering from Yeti in a long time. Sporting a full-carbon frame with a carbon dogbone link, the frameset comes in at a crazy-light 4.2 pounds. 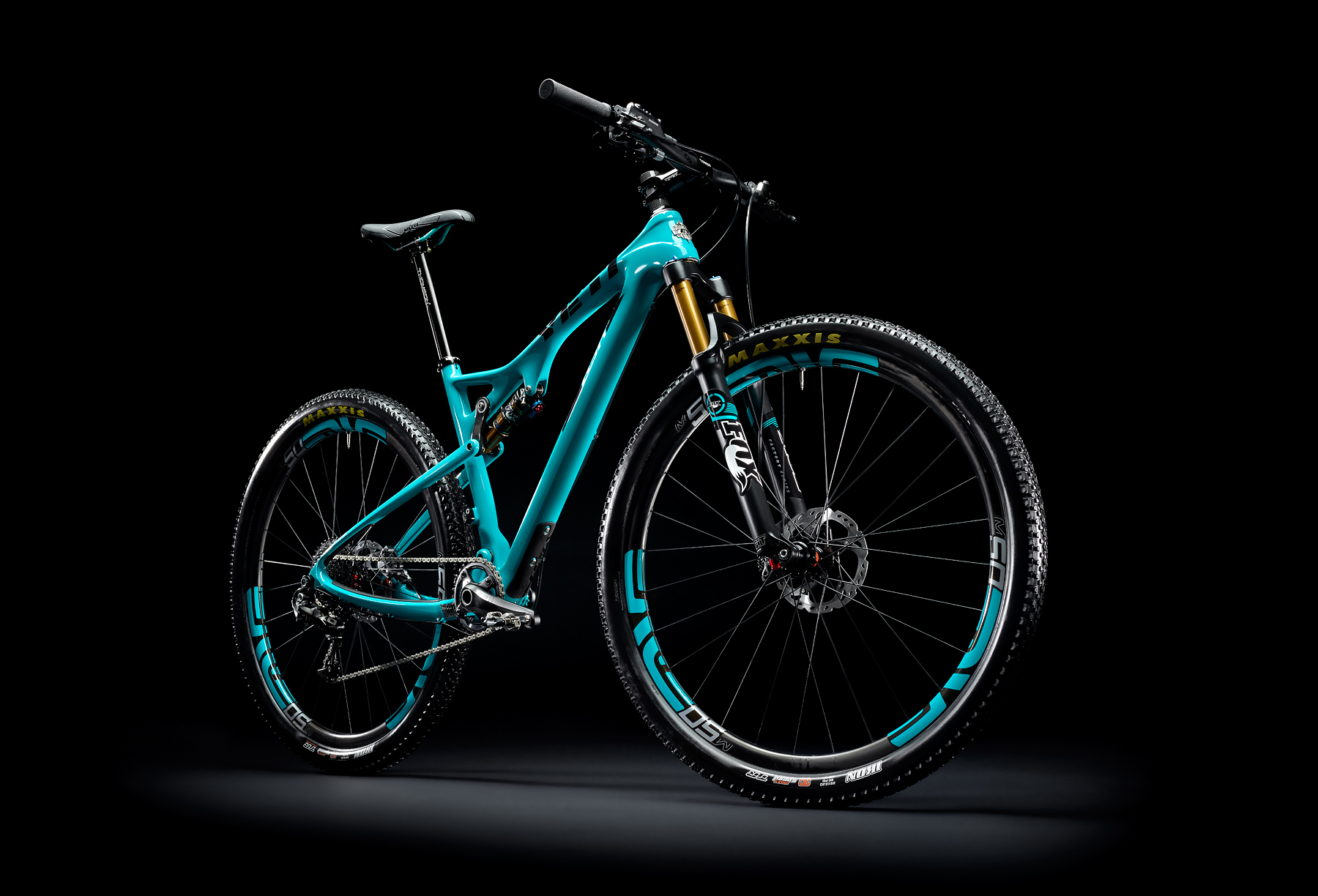 One of the most interesting things about the new AS-Rc is that the wheel size has been optimized in conjunction with the frame size, meaning that extra small and small frames sport 27.5″ wheels while medium through extra large frames sport 29″ wheels. While there haven’t been many companies to pull this stunt so far, I think this is a pretty smart move on Yeti’s part, and that we’ll see more and more companies following suit in the coming years. 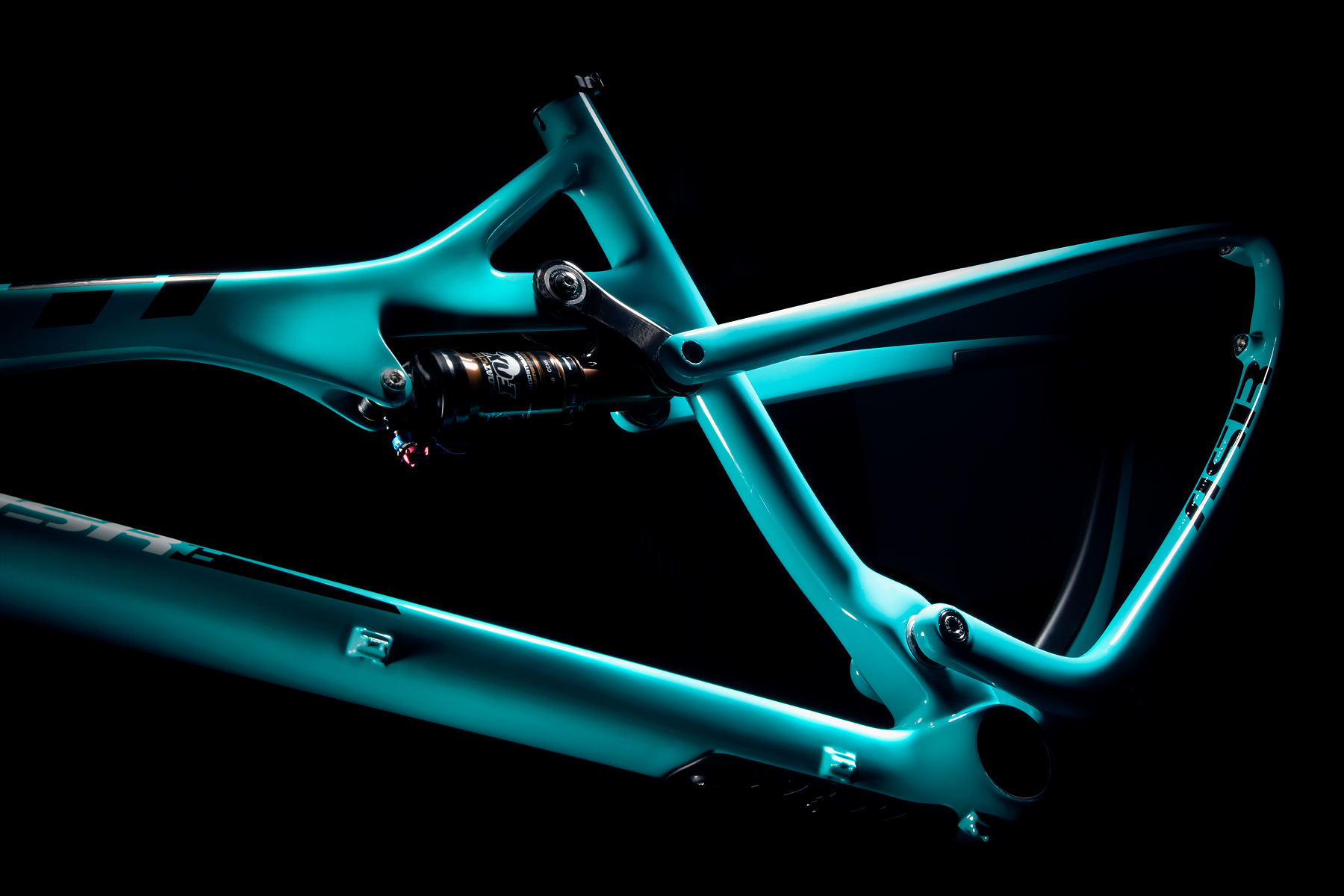 Read on for official information on the AS-Rc:

Yeti has introduced the new AS-Rc cross-country bike, expanding its line of ride-driven products. Built for cross-country racers and trail riders, the AS-Rc rolls on size specific wheels and delivers 100mm of optimized rear wheel travel. The AS-Rc will begin shipping immediately as a complete bike with builds starting at $5799.

The super lightweight (4.2lb. frame) and efficient suspension has been optimized for shorter travel with an updated and modified single pivot design. Yeti has worked closely with FOX to refine the suspension rate to give the AS-Rc a predictable feel that holds up while pedaling and retains composure when the trail begins to get rough. The new AS-R frame is designed using a carbon Dogbone link to add considerable stiffness to the chassis, and sports Yeti’s progressive geometry (69-degree head tube angle, long top tube, low bottom bracket) that has been borrowed from their experience in DH and Enduro. Wheel size on the AS-R is optimized on the AS-R with 27.5” wheels on the Extra Small and Small frames, and 29” wheels on Medium through Extra Large Frames.

“We have been out of the cross-country market for several years, so it was important that we nailed the form, fit, and function of the AS-Rc.” said Yeti President and co-owner Chris Conroy. “The AS-R has been a storied bike in our line and we raced cross-country for nearly twenty years and have produced some greats in the sport. XC racing is in our DNA and we’re excited to reintroduce people to our heritage with a bike that sports Yeti’s progressive geometry.” 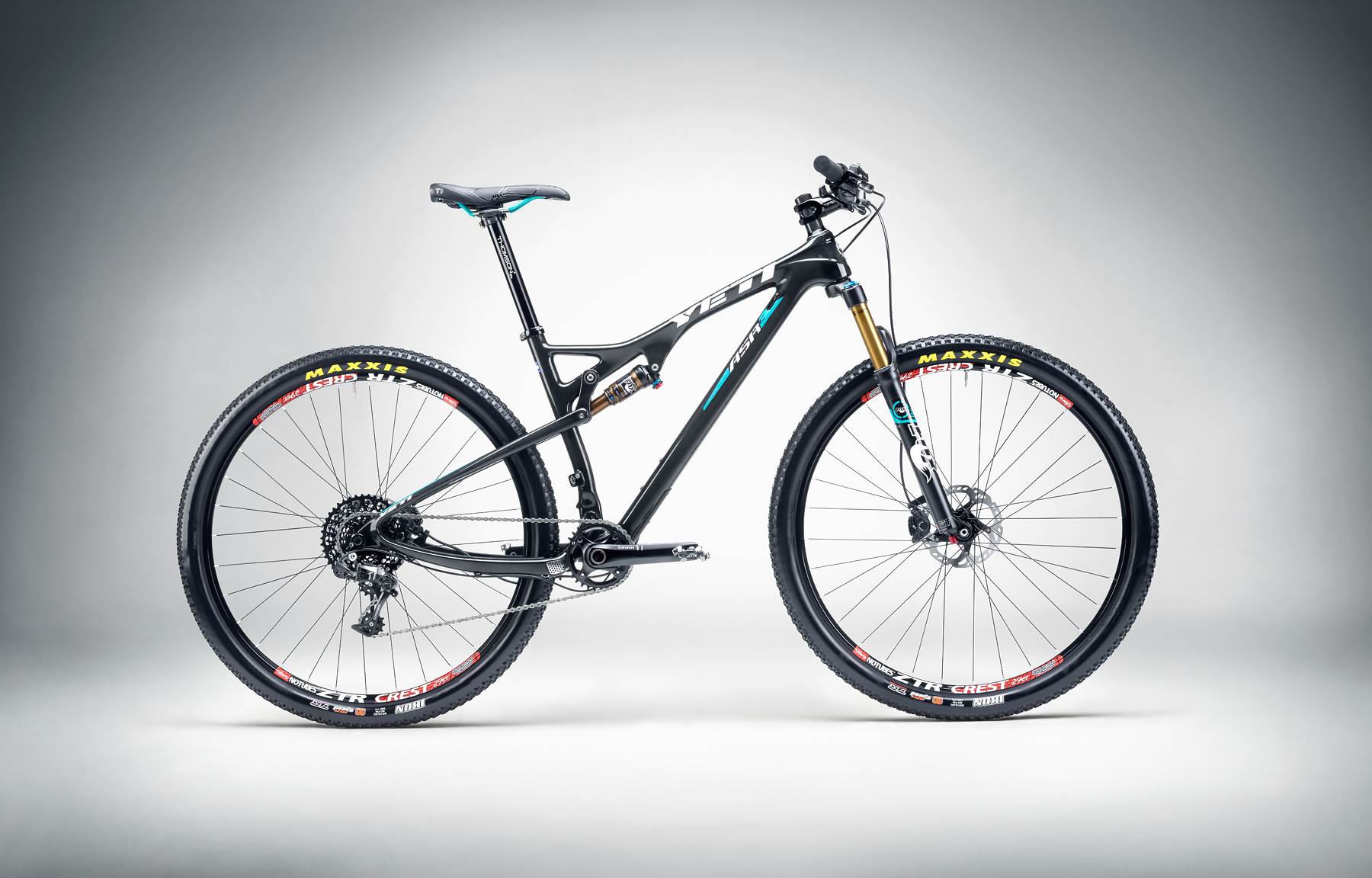 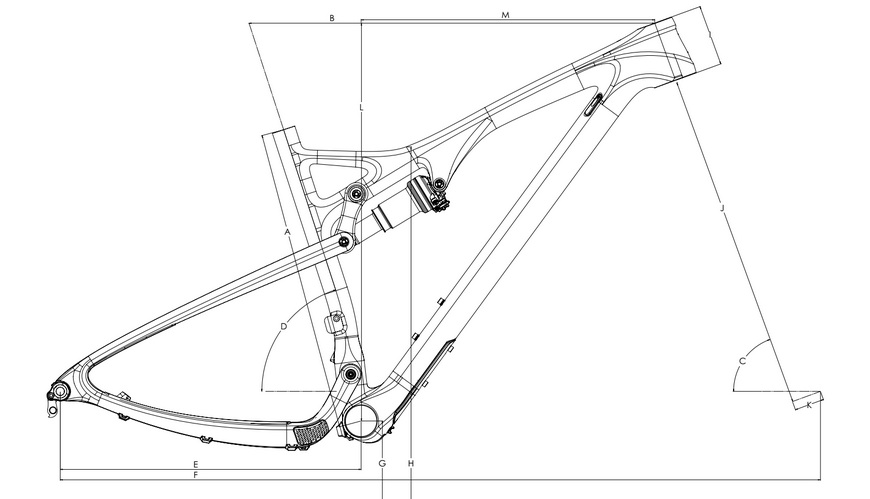 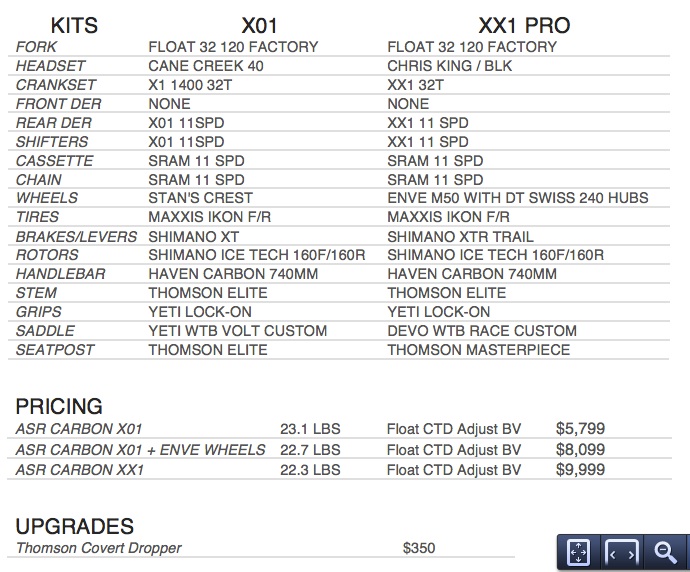 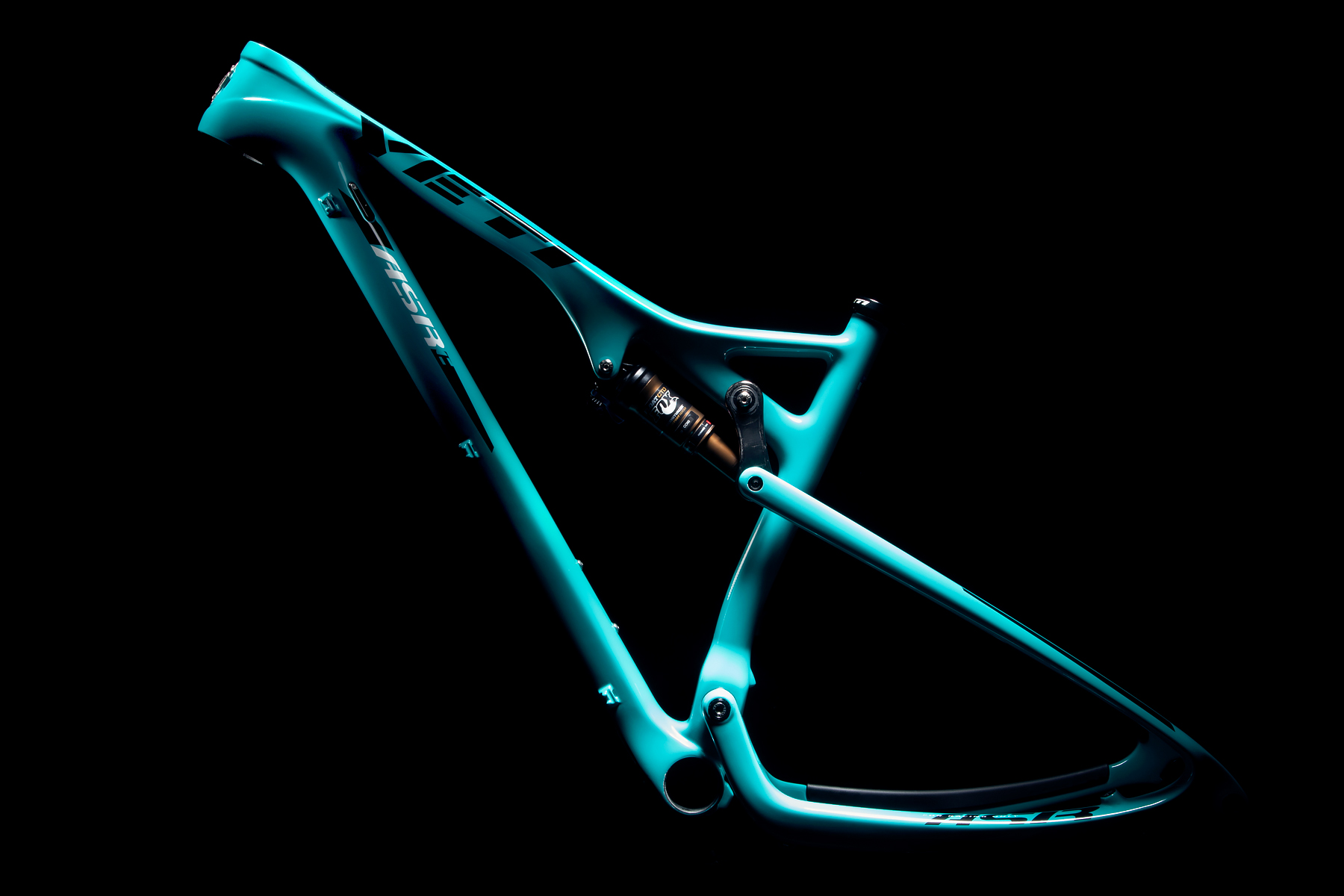 Gear
An Inverted Dropper from Enve, Revel DJ Bike, and Improved...
Community
A Chain of Inspiration has Grown Mountain Biking in the...
Gear
The Donnelly AVL Tire is Stoked to Climb Technical Trails...
Trails
An Intro to Bikerafting: How it Works, and How to...
Subscribe
Login
Please login to comment
9 Comments
Most Voted
Newest Oldest
Inline Feedbacks
View all comments

Pretty cool to see smaller wheels on the smaller bikes. Seems like the engineering and design would be a PITA (basically, two designs for one bike) but it’s probably the right thing to do.

It would be interesting to talk to Yeti about this and see how difficult it actually is. Most companies have to change their bike frame pretty dramatically from frame size to frame size, so I wonder if there’s more or less change with the different wheel sizes? But of course, they’d have to spec more stock parts, etc.

Yeti actually started this last year with it’s ARC carbon racing hardtail. Since they’re now doing it with the AS-Rc, it stands to reason it’s working well for them. It certainly makes sense to me, especially since shorter riders aren’t comfortable on tall bikes.

The bike looks great, however I see a trend developing at Yeti. The last two bikes introduced, SB5c and AS-Rc, have had very high “base” builds. It seems like they are positioning themselves as a “high end” or “premium” bike brand. Focusing more on the high end of the market than high volume bikes. They could always develop aluminum versions of the bikes in the future, but per previous coments about the SB5c that doesn’t seem to likely.

I am also surprised at the price of this bike. I understand that to get a light carbon frame it costs a descent amount of money. However, at the end of the day this is a single pivot carbon bike. I would have expected the price to be a little lower since there aren’t a lot of linkages and pivots like what is on the SB5c.

Well, it IS a good bit lower than the SB5c that you’re comparing it to: the “base” X01 build on the AS-Rc is $700 cheaper than the “base” X01 SB5c build. I don’t think you can expect a few linkage changes to knock off more than $700… in fact, I’m personally surprised that it’s even THAT much cheaper.

That is a fair point about the linkages not costing that much. When you look at an Epic with a similiar build kit it costs about the same.

That does, however, support my assesment that Yeti seems to be moving upmarket. I realize that they are a small company, but so is Niner and they have carbon bikes with lower build kits that lower the price to offer something to most budgets. I am not angry at them or anything for doing this, I just think it is an interesting move considering companies like Niner and Santa Cruz, within the last year and a half, have done the opposite and introduced different carbon layups to drive the price of their bikes down to cover a larger range of budgets.

Yep it’s definitely a conscious market move on their part. More and more I see Yeti lining up with companies like Ibis in the boutique brand category

An aluminum frame option would be nice! I’d love the full carbon bike, but they are pricey!

I think that’s why they keep the ol’ 575 around–it fills the more affordable notch at the bottom end of their line.