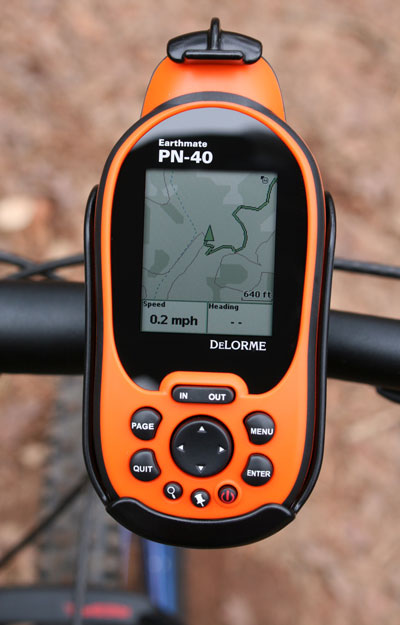 I’ve been using the DeLorme Earthmate PN-40 GPS for almost 2 months now and I thought it was about time to share my review. After seeing the PN-40 strapped to mountain bikes in full color magazine ads I wondered how it would perform on the bike, especially compared to the made-for-bikes Edge series from Garmin. This post will only cover the Earthmate PN-40 software – look for a hardware-focused review later this week.

First things first: the maps and mapping software included with the Earthmate PN-40 are truly top notch. In fact before using the PN-40 I was a big fan of the Topo USA desktop software with its clean, vectorized topographic maps and the latest version builds on the best features (though sadly the interface is still pretty confusing). With Topo USA 7.0 (included) you can send detailed maps for driving and trekking to your GPS in just a few clicks. 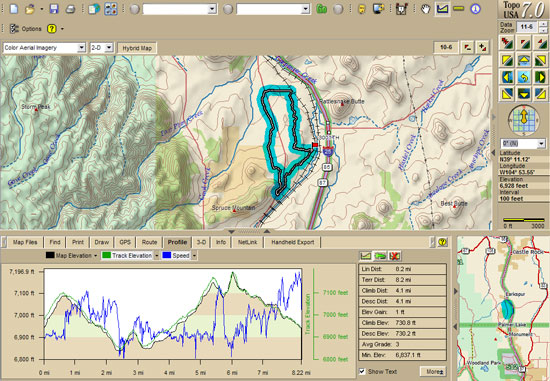 The PN-40 is great at mapping but it also includes the ability to view color satellite and aerial imagery on the GPS itself (unlike the Garmin Edge). With the right imagery loaded onto your GPS it’s like having Google Earth in your pocket – though in my experience most of the images aren’t nearly as high-res as those on Google Earth. Imagery is available online and you get a few downloads for free, after which you’ll need to pay a small annual fee to access unlimited images. The imagery downloads aren’t quite instant (you need to request them through the software and wait about 5 minutes for an email telling you they’re ready for download) but once they’re loaded in Topo USA they’re a easy to send to your GPS. The satellite imagery is a little difficult to follow while on the bike because it’s so detailed but it did help me scope out an area where I heard there were some unofficial MTB trails.

The DeLorme Earthmate PN-40 makes it fairly easy to load GPS tracks from the web using the included Topo USA software. Just open any GPX-formatted file, preview it on screen, then send the track and waypoints to your PN-40. Topo USA also makes it easy to reverse imported GPS tracks and to view elevation and speed profiles on the computer before downloading the data to your GPS.

Once your trail data is loaded on the PN-40 you can change the display color of the trail itself and follow the track starting from your current position. On the trail the PN-40 alerts you to turns using an audible tone that sounds kinda like a bird – a nice touch since an electronic beep would be out of place in the great outdoors. DeLorme can handle up to 10 tracks with 10,000 trackpoints each (!) so you don’t need to worry about imported tracks losing any detail (by comparison Garmin limits tracks to 500 points).

Sadly, the Earthmate PN-40 falls short in this department. Resetting and restarting a trip on the PN-40 is a multi-step, menu-driven process that will be frustrating to anyone hoping to use this GPS as a training tool. While it does include basic functions like time, distance, speed, etc., the PN-40 leaves off an elevation plot even though it boasts a barometric altimeter for keeping track of elevation data. After the ride you can view a plot of your elevation so all is not lost.

The DeLorme PN-40 is a good multi-sport, multi-function GPS for outdoor enthusiasts but serious mountain bikers may want to consider a GPS made specifically for cycling instead. Out-of-the-box features like a color screen, turn-by-turn driving directions, topographic maps, and satellite imagery are tough to beat for the price making this a good GPS for outdoor generalists.

Look for part II of this review covering additional hardware features included in the Earthmate PN-40.

Gear
Get Away from It All with These Bikepacking Picks
Gear
Should I Mullet My Mountain Bike?
Community
Middle and High School Mountain Bike Racing Season is Back!
Progression
Balance Training for Mountain Biking
Subscribe
Login
Please login to comment
2 Comments
Most Voted
Newest Oldest
Inline Feedbacks
View all comments

The Garmin Foreunner 305 which I use for Xterra and Tri traing in land and water..will allow 12600 points in 3.5 hours max and then will rewrite over FIFO data. Certainly lacks the screen etc of the Delorme….but uploading to http://www.motionbased.com will provide all of the functionality of data correction especially if your dealing with altitude from a baro-based unit, plus the google maps, sat, hybrid etc….
The Forerunner 305 fits on your wrist in Buck Rogers fashion.
Thanks for the review..cheers

[…] is part II of a two-part review of the DeLorme Earthmate PN-40 GPS. In the first review I talked about the software included with the PN-40 – both the desktop and GPS unit software – and […]