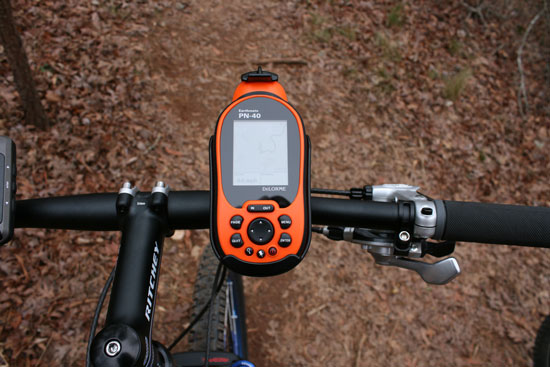 This is part II of a two-part review of the DeLorme Earthmate PN-40 GPS. In the first review I talked about the software included with the PN-40 – both the desktop and GPS unit software – and in this review I’ll be focusing on the hardware.

The Earthmate PN-40 boasts an attractive case design that’s rugged and easy to grip in your hand plus it’s even waterproof to IPX-7 standard (basically waterproof in 1 meter of water for 30 minutes). In any event, the Earthmate will keep ticking if you drop it (guilty) or if you ride in the mud and/or rain (also guilty). The buttons on the PN-40 give you handy access to commonly used functions but at times I found them hard to press while riding with gloved hands.

The PN-40 comes with a lanyard loop for handheld use and when used with an appropriate RAM mount can be secured to your bike’s handlebars. The handlebar mounting system was easily the worst I’ve experienced, requiring multiple screws and nuts with very little adjustability for bars of differing diameters. The mount itself holds the GPS quite securely but securing the mount to your handlebars (especially oversize bars) is quite another story. On one ride I ended up putting the GPS in my rear jersey pocket where it got a great signal, though that meant I was constantly stopping to consult the map. Unfortunately (or fortunately depending on how you look at it) the RAM mount is NOT included with the PN-40.

The PN-40 has a brilliant daylight-reading screen which makes reading maps easy in most light conditions, though I found satellite imagery was difficult to read in direct sunlight. The PN-40 includes up to 8GB of internal memory (that’s giga with a G!) and with support for removable SDHC memory you can add another 32GB. The included serial-USB connection is mega slow and DeLorme recommends transferring large map sets to the GPS using a memory card reader (not included). To give you an idea about how slow the map and data transfers can be: sending 100 MB of images to your GPS will take over an hour. Before a recent ride I started to transfer satellite images as I walked out the door but gave up after 20 minutes when I realized how long it would take. Lesson learned – plan ahead or get a memory card reader.

The DeLorme Earthmate PN-40 uses a high-tech chipset that locks on satellites mega fast for near instantaneous acquisition – no more waiting at the trailhead for your GPS to sync. The PN-40 also includes a dual-core processor that crunches through detailed maps and imagery for quick map redraws that won’t slow you down on the trail. A built-in electronic compass, altimeter, and accelerometer allow the PN-40 to orient itself even when you’re not moving – a nice touch for sure. Battery life is so-so using standard AA alkaline batteries but it’s generally more than enough for an epic ride (plan on 4-8 hours depending on how you use the GPS).

The Earthmate PN-40 boasts an impressive feature list with killer software. While the PN-40 may not have been designed for mountain bikers first and foremost, it’s a rugged, reliable, and full-featured outdoor GPS anyone can appreciate.

As to download speed you mentioned…Who really says, ” Gee, I’m going to ride an epic trail that I’ve NEVER seen, been on, or heard of, so I need a map…and I need it in the next :10 minutes!!! ….As far as I’m concerned, If I need a map (riding a brand-new-to-me trail) I’m not doing it with less than a day’s preparation, so do I really care if the stock USB download time is more than an hour, two, three?!!!…Heck, I’ll let it go overnight while I study the backside of my eyelids, wake up and roll….

So, I really have no downside opinion to the PN-40…but it’s all objective and different for everyone…

Have fun riding with this great GPS!