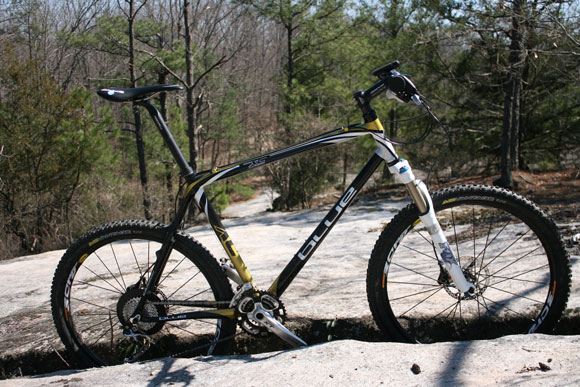 Mudhunny and I started getting curious about Blue Competition Cycles last summer after hearing about them from a friend and over the next several months we talked with people at the company about their mountain bikes. Everyone we spoke with at Blue told us they only make mountain bikes for pro-level athletes – in other words not us – but we were determined to see what their bikes were about. I finally got a chance to borrow a Blue XC Carbon mountain bike back in March and now I totally understand what makes this such a serious mountain bike.

The Blue XC Carbon frame is lightweight at just 1330 grams thanks to its lugged carbon fiber construction. While you may be able to find carbon mountain bike frames that weigh a few grams less, Blue has designed the XC frame to stand up to serious abuse on the trail. Besides keeping you safe, that extra strength means your Blue bike will last for years and they even offer a limited lifetime warranty to back it up. 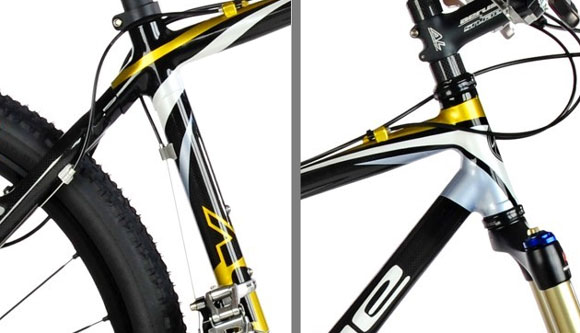 In terms of aesthetics, it’s hard to find a better looking mountain bike than the Carbon XC. If you’re new to the carbon fiber scene you’ll notice there are no welds at the tube connections and the frame is completely smooth. The XC Carbon is built up using carbon tubes and aluminum lugs, giving the joints a flared appearance around the connections. (Look for an upcoming article to discuss the basics of carbon frame construction.)

Performance is what really matters when it comes to serious competition mountain bikes and the Blue XC delivers it in spades. With carbon fiber, bike builders can optimize the stiffness of the frame along different dimensions (vertical, lateral, etc.) and the XC Carbon is designed to be as laterally stiff as possible. Lateral stiffness means that the energy from each pedal stroke is translated directly into moving the bike forward rather than bending the frame. 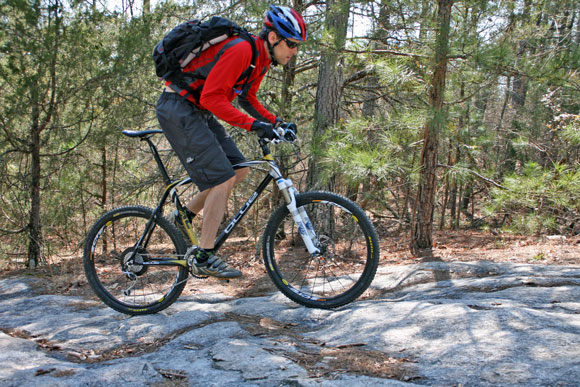 In practice this means the Blue XC Carbon is super responsive on the trail. My first test ride was on the 1996 Olympic MTB course with Ricardo, a younger guy who is much faster than me. Around tight corners the XC Carbon surprised me by holding its line better than any bike I’ve ever ridden. On the exposed granite sections the bike accelerated instantly with virtually zero power loss. Frame stiffness does come with a price and halfway around the course I let some air out of the tires for a little relief from the pounding. I can’t blame the bike though – this machine is designed for riding fast, not for making your butt feel nice. 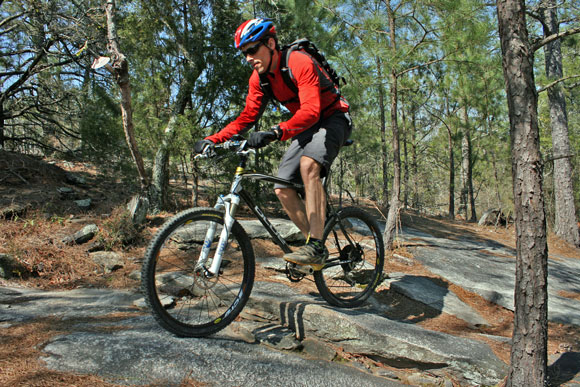 On a follow-up ride I took the XC Carbon out to Yellow River to see how it handled on smooth, flowy dirt and again I was blown away by just how responsive the bike was. Initially I found myself brushing tree trunks because the bike turned more quickly than I expected. After a couple laps the bike felt like an extension of my arms and legs, responding instantly to every lean, hop, and pedal stroke. When riders talk about flow, this is what they mean!

The XC Carbon came out in 2005 and quickly earned its race cred with pro rider Seth Wealing, 2006 Xterra US Pro-Series Champion. Seth continues to ride for Blue and has been helping drive the development of a wildly popular new FS carbon bike called the Blue Ryno (hopefully I’ll have a chance to test one later this summer).

The Blue XC Carbon can be ordered as a frame only or with a full SRAM X-9 package. The bike I tested was a a non-standard, full XT build and the components performed as expected, though the wheels in particular were a little heavy. In 2010 the XC Carbon is getting a full makeover with a moncoque frame, increased head and down tube stiffness, and BB30 compatability.

Blue Competition Cycles is serious about building lightweight, stiff, and responsive mountain bikes for competitive riders. The only question is: can you keep up with the XC Carbon?

Trails
The California Mountain Bike Coalition: A Squeaky Wheel for Trail...
Gear
7 Mountain Bike Tools That Pay for Themselves in the...
Progression
How to Go from Clipless to Flat Pedals for Mountain...
Trails
East Bluff Bike Park in Copper Harbor Plans to Offer...
Subscribe
Login
Please login to comment
2 Comments
Most Voted
Newest Oldest
Inline Feedbacks
View all comments

Man o Man u are a lucky man:) That thing looks like its going about 40mph just standing still.

Since you were on such a fine XC bike I think it would have been appropriate to sport the bib shorts, and tight jersey. That massive pack would also need to go:) The sweet shades and visor-less lid can stay however

Thanks for the review!

The shades are Ryders Zephyrs which I HIGHLY recommend. The visorless lid is just a personal preference – gotta save weight wherever I can so I can carry that heavy pack!