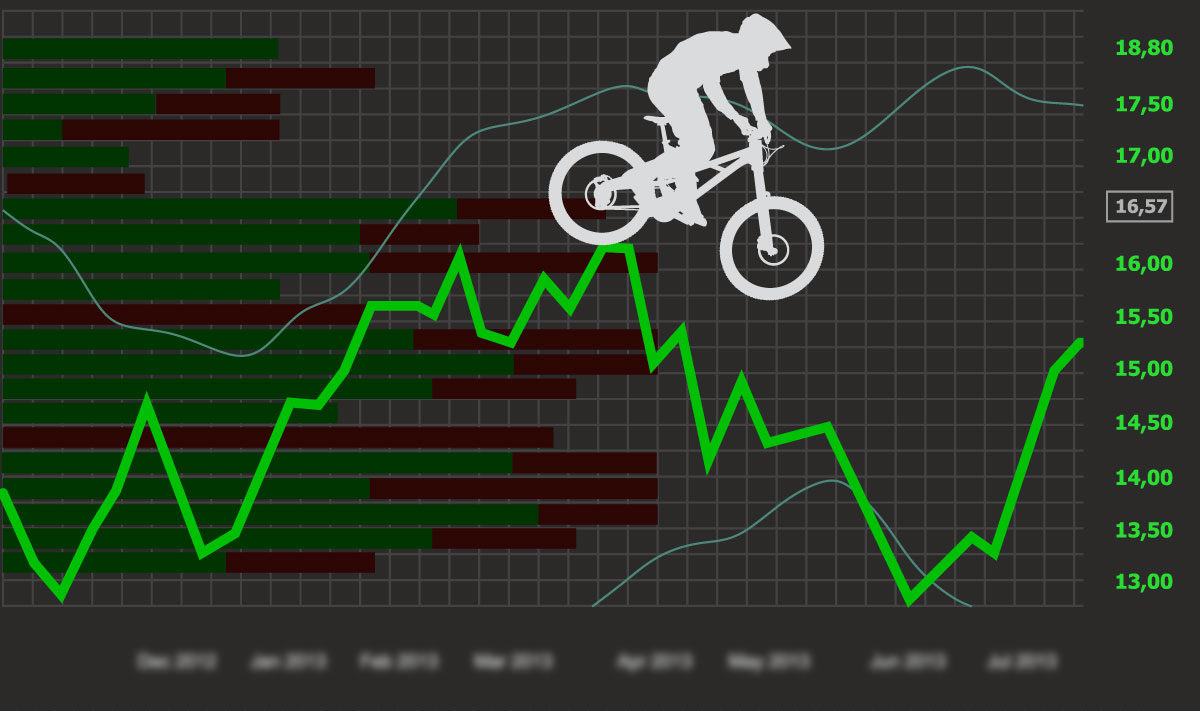 Comparing mountain bike prices year-to-year is generally an exercise in futility. For one thing, few mountain bike models last more than five years before some brand new hotness replaces the old standby. Not only that, part specs are constantly changing due to changes in technology, consumer preferences, or in some cases, to hit certain price points. Then there’s the global economy, supply chains, and distribution considerations that play into prices.

I hate to disappoint the conspiracy theorists in the room, but there isn’t some mastermind at the top of the industry deciding how much to charge for mountain bikes from year to year. Clearly there are many, many factors at play.

However, it should be possible to identify price trends by aggregating pricing data across multiple brands spanning multiple years. I decided to do my own analysis, focusing on the “big three” mountain bike brands–Giant, Trek, and Specialized–since these companies tend to encompass a large part of the US market, and their model line-ups tend to be pretty stable from year-to-year. Heck, Specialized has been selling the Stumpjumper in some form or another since 1981!

This analysis accounts for inflation by placing all prices in 2017 US dollars and relies on suggested retail prices rather than actual sales prices. I was unable to find pricing data for all models for all years in my analysis, so the data set is somewhat incomplete. All of the bikes in this analysis are mountain bikes, so other types of bikes were not considered.

If you’re thinking about buying a new mountain bike, this seems to be a good time to go for it, especially if you’re in the market for a Trek or Specialized. 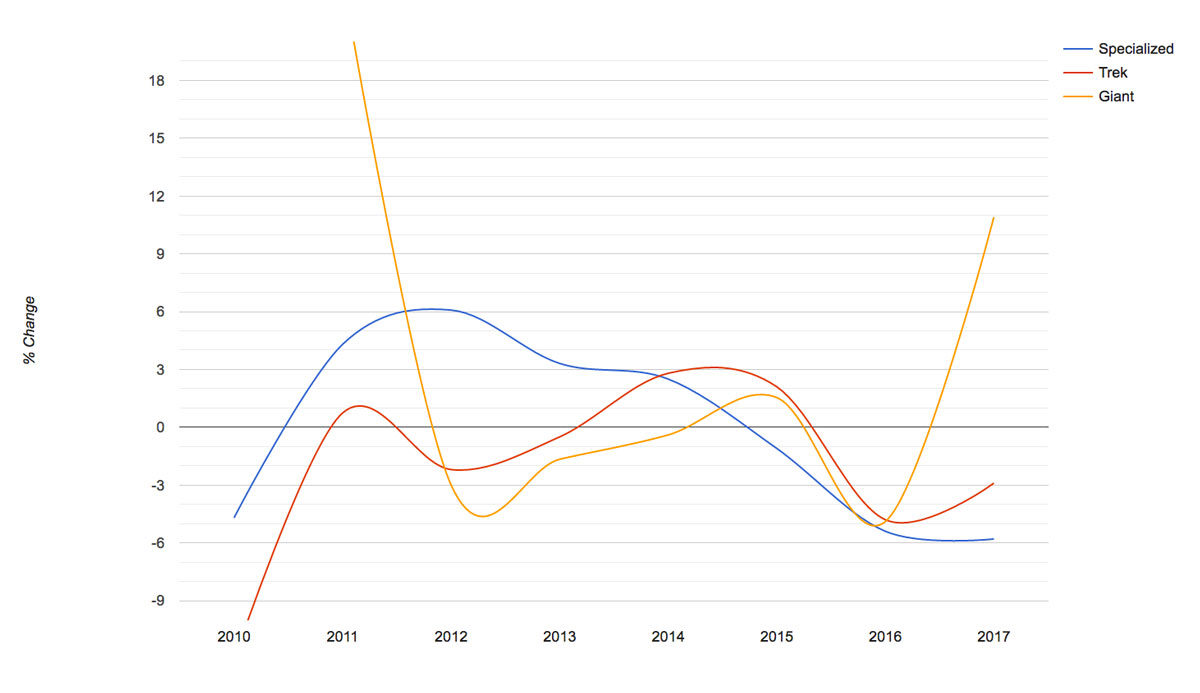 Looking at the chart above, it appears Trek and Specialized slashed prices between 2009 and 2010, perhaps in response to the Great Recession of 2008. Prices rebounded through 2015, and then the bottom seems to have dropped out. We talked about this after Interbike just last year when it was clear the major MTB companies were in a tough spot, due in part to excess inventory and even price pressure from online retailers. In both 2015 and 2016, the suggested retail prices of the Specialized mountain bikes included in our dataset decreased 5%; Trek MTB prices fared similarly, dropping 5% and 3% in 2016 and 2017, respectively.

Giant, on the other hand, seems to be operating on a different timeline. Admittedly our dataset for Giant was small, and the nearly 32% increase in prices of the Anthem Advanced 2 skewed results to the high side (without this bike, the company’s prices stayed about even from 2016 to 2017.) It’s also interesting to note the price on the Anthem Advanced 2 actually decreased significantly just the year before, by nearly 17%. Talk about a whipsaw ride!

The Giant Anthem Advanced 2 price changes illustrate one of the key problems with trying to compare the prices of bikes from model-year to model-year. The 2017 Anthem Advanced represents a big update from the previous version, swapping the 2x, Shimano Deore drivetrain for 1x, SRAM X1 and upgrading the wheels to carbon rims, among other changes. It’s basically a totally new bike… except for the fact that it’s still the least expensive Anthem Advanced. If a bike company’s line is basically a series of slots priced for various consumer types, that means some riders just got priced out of Giant’s Anthem Advanced 2 slot this year. 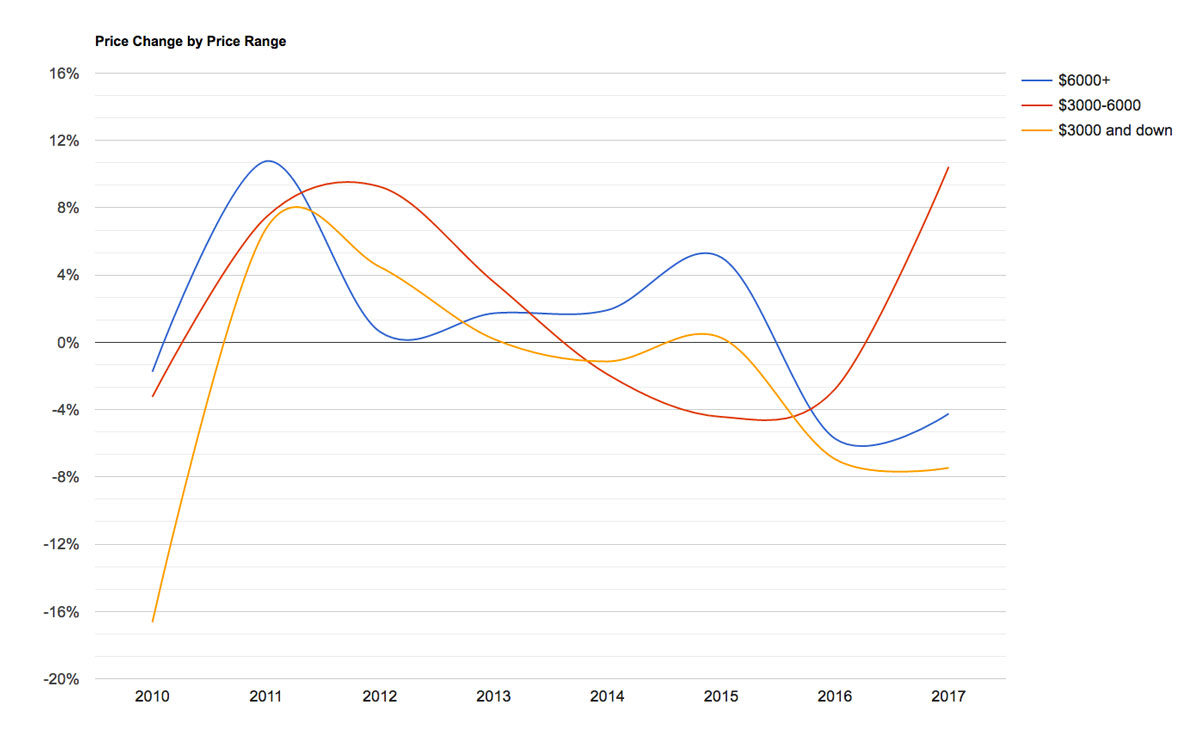 Looking at the data another way, it looks like now is a good time to avoid bikes in the $3,000-$6,000 price range. Consumers at the lower end of the market are by far the most price sensitive, so it makes sense that the prices for sub-$3,000 biked are more volatile than those for more expensive bikes. The high end was hit pretty hard recently as well, after seeing near continuous rises starting in 2010.

Aggregating all the data, the average mountain bike price change from 2010 to 2017 has been 0%. Not only that, the sum of the changes during that time is -2%. Bottom line: over the past 8 years, mountain bike prices have generally changed in line with basic inflation.

Speaking of inflation, don’t forget about mountain bike technology inflation over the past 8 years! Consider this: if you had a choice between a pristine, never-before-ridden 2010 mountain bike and an equivalently-priced, 2017 mountain bike, which one would you choose? That’s an easy question, but the next question is, how much of a premium is the 2017 model worth over the 2010? Personally, I would suggest that tech premium is worth between 25% and 50%, though it’s not easily quantifiable.

In the mountain bike world, the early- to mid-1990s might as well be ancient history. At that time, full suspension was a relatively new concept, and bike companies were furiously rolling out new features and materials like carbon fiber. Since suspension and carbon fiber were so new and rare at the time, one might assume that high-end bikes were more expensive or at least comparable to today’s high end bikes.

Today, Specialized sells S-Works hardtail mountain bikes starting at $8,000, and other S-Works level mountain bikes are currently priced at nearly $10,000. Clearly the technology has improved by leaps and bounds since the 1990s, but pricing on the high end has also grown pretty significantly over the past 20 years. Unfortunately I didn’t have a chance to investigate further to see just when high-end mountain bike prices made the jump.

Mountain bikers often focus on high end mountain bike prices when complaining about the cost of modern mountain bikes, but that price increase doesn’t tell the whole story.  For one, mountain biking, like everything, is becoming more competitive, so it would seem the desire for the fastest and lightest bikes has only increased.  Essentially, the ceiling on high-end bikes has been rising over the past 20 years. In the past, there simply weren’t as many price points, particularly when it comes to the top-of-the-line.

So while mountain bike price changes from year to year may seem to be extreme, over time the prices appear to be fairly stable, even as technology continues to improve. And mountain bikes may seem to be much more expensive today than they were 20 years ago, but in reality there are simply more price points available today, particularly on the high end.

Your turn: Do mountain bikes feel more or less expensive today than they did 10 or 20 years ago?

Gear
Devinci's New Aluminum Hardtail and FS Bikes are Made in...
Culture
Trek Slash Gets 29" Wheels for 2017
Gear
Testing the Updated 2017 Trek Remedy 9.8 - A Review
Gear
Specialized Claims the S-Works 6 XC Shoes Are the Lightest...

You’ve done an interesting analysis. But I think there are a couple factors that may be material in explaining some of the results that you see that I am not sure you considered. I do a lot of financial analysis professionally, so this is my “thing”… Please bear with me.

First, the effects of currency on pricing is significant, particularly since virtually all components and frames are made in Asia these days. In some industries, particularly luxury goods, a stronger dollar making prices of goods made in Asia cheaper would not be reflected in lower prices. But the bike business is highly competitive and manufacturers will tweak prices to reflect the effects of a stronger dollar. I believe that currency could explain some years where prices went down.

I was interested to see that the average price of bikes in the $3,000 to $6,000 range was significantly higher in 2016. I suspect that you got your data not by averaging the revenues for the manufacturers or industry sales data but by averaging the list prices of the models in their catalogs. I would suspect that an increase in the number of models in the $3,000 to $6,000 price band would account for the jump in the average price you saw last year. In other words, I don’t think that people were seeing an apples-to-apples price increase on models in that price band but a skewing of the average price based on a large number of new models at the upper end of that price band.

In general, I would suggest that the ability of any one bike manufacturer to have enough brand value to be able to price a product at a sustainable premium above another equivalent product from a direct competitor is going to be minimal. The fact that all bike manufacturers offer components from a handful of makers such as Shimano, SRAM, etc. means that their products are all delivering a very similar value equation, and consumers, particularly at the high end, understand that a Trek XC bike with a Shimano XTR drive train will shift approximately the same as a Specialized XC bike with the same Shimano XTR drive train. In other words, the same embedded components limit one brand’s ability to differentiate itself in many ways, and that limits brands’ ability to charge premium prices. That’s why the reason for that price spike in the $3,000-$6,000 price band lies elsewhere.

Great points. There are definitely a number of factors at play here.

Fascinating! I suspect the real inflation is in my wishes.

Great job Jeff!
To account for and apply average inflation over the time period to bikes and not do the same for wage inflation(or lack there of) at the various levels would be ignoring the other elephant in the room. If my “real” wages aren’t keeping up with inflation than the bike may stay at largely the same price, but affordability erosion persists year over year.

Thanks for sharing, comparing and initiating the conversation on this topic.

Even though bikes might be more expensive today (in real terms), a $6k bike today is waaaaaaaaaay more capable with better functioning parts than a $5k bike from 1990. Not even comparable. Lighter, more suspension travel, smoother suspension, better brakes, lighter and stronger, 1x drivetrain, better tires, better ergonomics, better geometry, more variety, sizes and choice of materials. Not to mention they look so much better. In 1995 you could not get a 29er, 27.5, fat bikes or plus bikes. Value for money bikes offer much more value today.

I agree that the capability of bikes is orders of magnitude above where they used to be, I’m one of those people who keeps bikes/cars….. forever. My wife was riding a Klein Mantra until 3 months ago. She upgraded from a $6000 (per the article) bike to a $1300 bike that is so far above the mantra in capibility it’s laughable . Unfortunately I rode her bike and now I just have to upgrade my 2002 Specialized Enduro….