Trek made some major changes to the Remedy line for 2017. They eliminated the 29er version of the bike and then totally redesigned the frame. The new Remedy sports 27.5″ wheels, 150mm of rear travel, a revised “Straight Shot” downtube said to increase stiffness, and geometry that is longer, lower, and slacker than the previous generation.

There are five different models in the Remedy lineup – the 7, 8, and 9 Race Shop Limited use an aluminum frame, while the 9.8 and 9.9 Race Shop Limited use a carbon frame. Trek also lists two “women’s models” of the Remedy, but apart from a different paint job and saddle, the bikes are identical to the “men’s” models. I tested the second-highest model Remedy 9.8, which retails for $5,300. 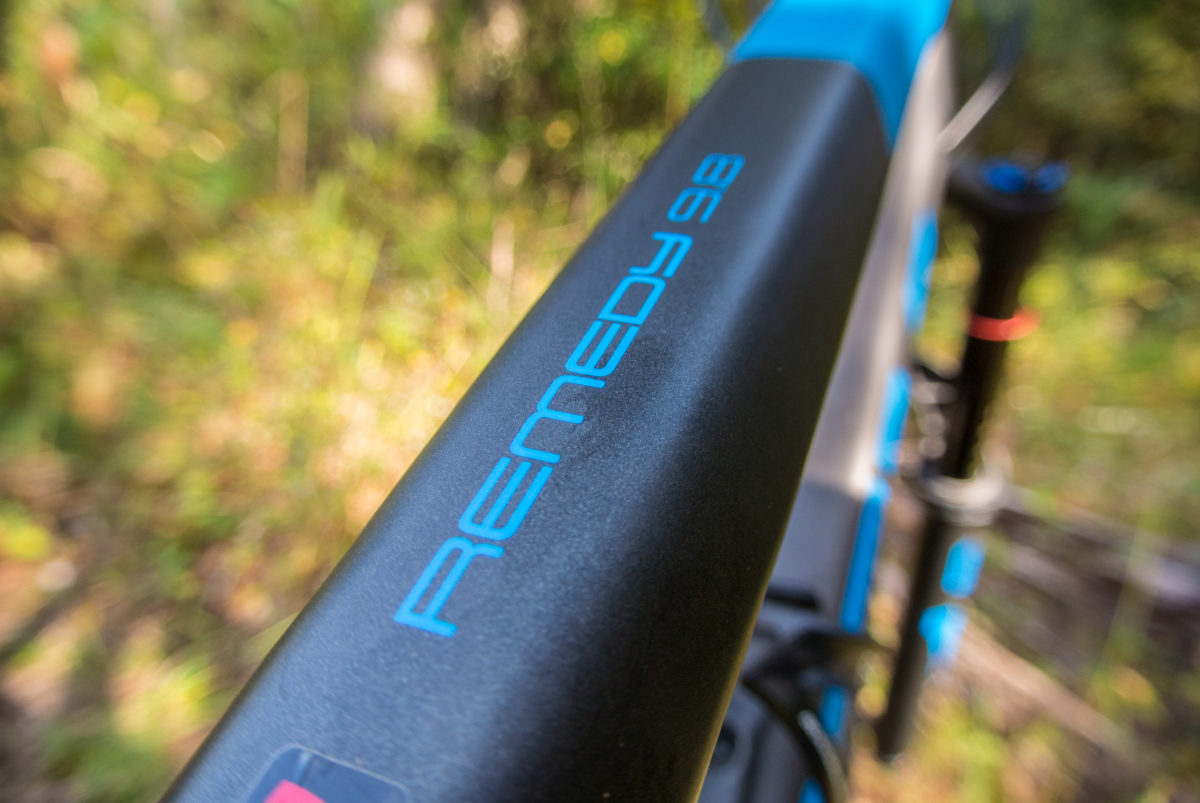 As mentioned, the Remedy 9.8 has a carbon frame, including the main triangle and seatstays – the chainstays are aluminum. Both the fork and the shock come from RockShox, although the rear shock isn’t something you could buy off the shelf. It uses Trek’s RE:aktiv technology that they initially developed with Penske Racing. The idea behind RE:aktiv is one you’ve heard before: the shock is supportive under pedaling but becomes plush on larger impacts. And, it does this all automatically without you needing to flip a switch or turn a dial.

Trek specs the bike with a Shimano XT 2×11 drivetrain, an increasingly rare sight. According to Trek, many of their customers outside the US still prefer the two ring setup. If a customer wants to change their drivetrain, it’s easier going from a two-by to a one-by than the other way.

The brakes are Shimano XT with 180mm rotors front and rear, and the dropper is a RockShox Reverb. Unfortunately, the two-by drivetrain, Shimano brakes, and Reverb remote don’t play nicely together, which puts the “fun button” in an awkward location. Trek’s website has the bike coming with a Bontrager dropper, so perhaps there were supply issues. The remaining components are from Bontrager including a carbon bar, aluminum stem, saddle, and wheels wrapped with 2.40″ XR4 tires.

Even with 150mm of travel and a 66.5-degree headtube angle, the Remedy had no problem weaving through the tight trails at the Whitewater Center in Charlotte. True to its name, the RE:aktiv shock took everything the trail could throw at it in stride. The trails were covered in roots and rocks and while the climbs weren’t long, they were steep and punchy. Not once did I feel the need to adjust the shock out of the open position.

While I didn’t need to use the small ring up front in Charlotte, I can see why two-by drivetrains are still appealing to some riders, especially on a trail bike. Front shifting is much faster and more precise than it was just a couple of years ago. It’s a little more weight to push around, but the tradeoff is the ability to spin easily up any climb.

Like many of Trek’s bikes I’ve ridden over the past couple years, the Remedy just feels right. I could hop on and ride it hard without an acquaintance period. The suspension, geometry, and components create a well-rounded trail bike that goes about its business without fuss or drama.

Wow that bike is really sweet!