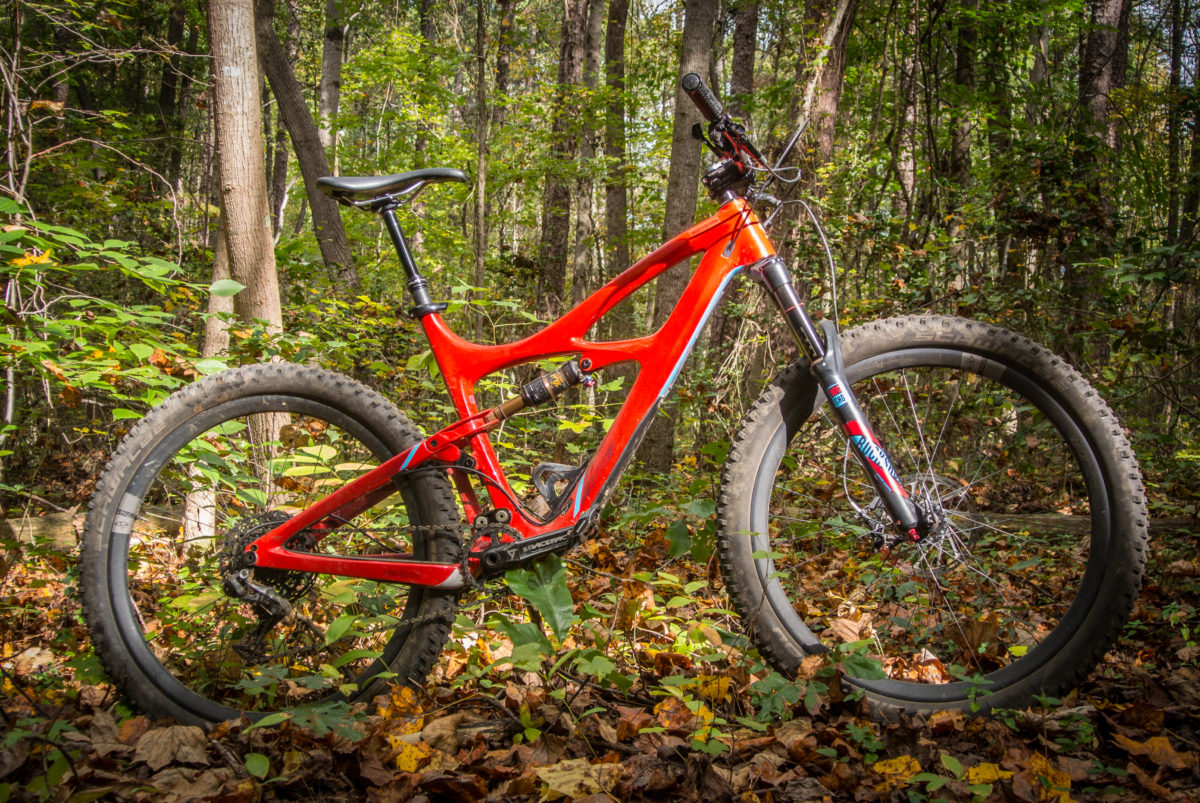 When I rolled up to the Ibis tent at Cyclofest, I was a little bummed to see they only had plus versions of the new Mojo 3 available to demo. I’ve ridden a few plus bikes, but I’ve found that they do best on open terrain where you can sustain your speed. The trails at the Whitewater Center are exactly the opposite – they’re tight and twisty with constant up and downs. If nothing else, the trails are a great place to put a drivetrain through its paces. A “meh” ride is still better than no ride at all, so off I headed on the plus bike. 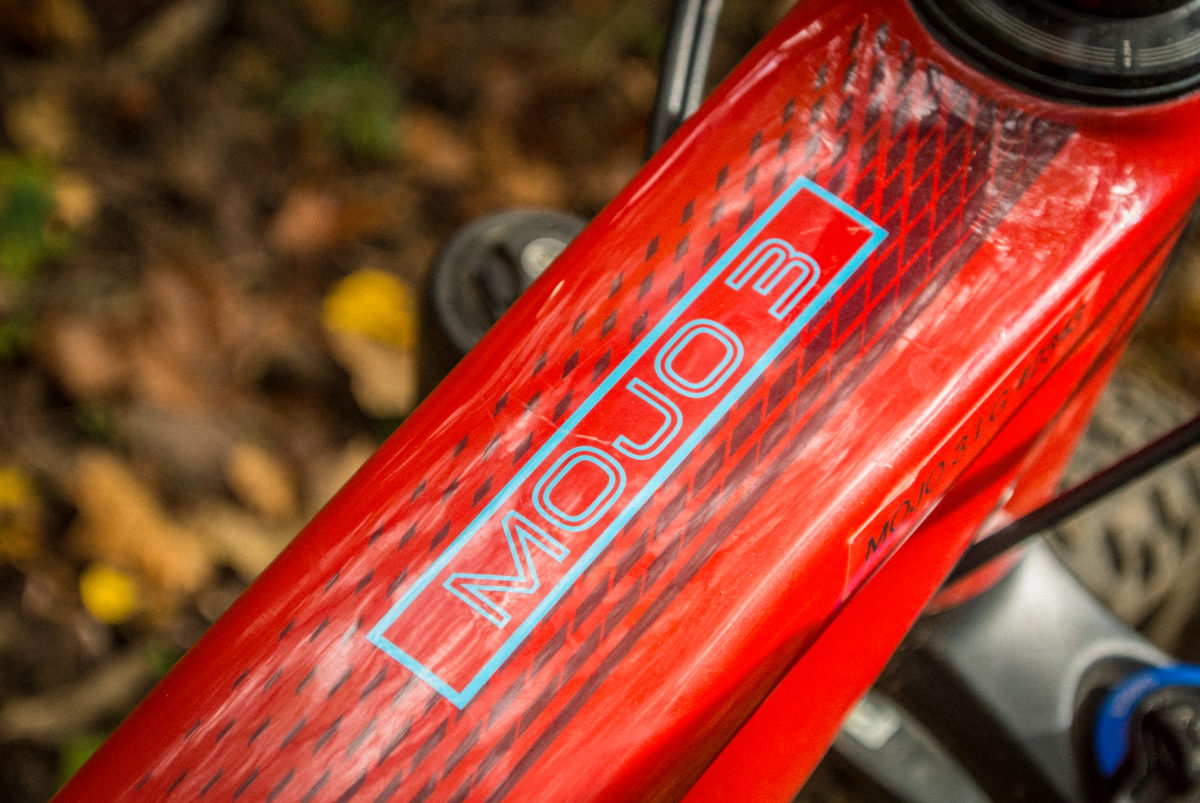 I’ve always thought that Ibis made good-looking bikes, but the 130mm travel Mojo 3 is especially pretty. It still has the double diamond front triangle that is unmistakingly Ibis, but it has been reworked slightly to improve standover clearance and to add room for a water bottle. Sporting a glossy red paint job, the bike screams speed. The chunky Ibis 741 carbon rims and 2.8″ Schwalbe Nobby Nic tires balance the sleek aesthetics of the frame nicely. While many brands make their 29er frames compatible with plus wheels, Ibis took a slightly different route. They designed the Mojo 3 to work with 27.5″ tires from 2.3″ wide up to 2.8″. For the why, check out Greg’s article covering the launch of the bike earlier this year. 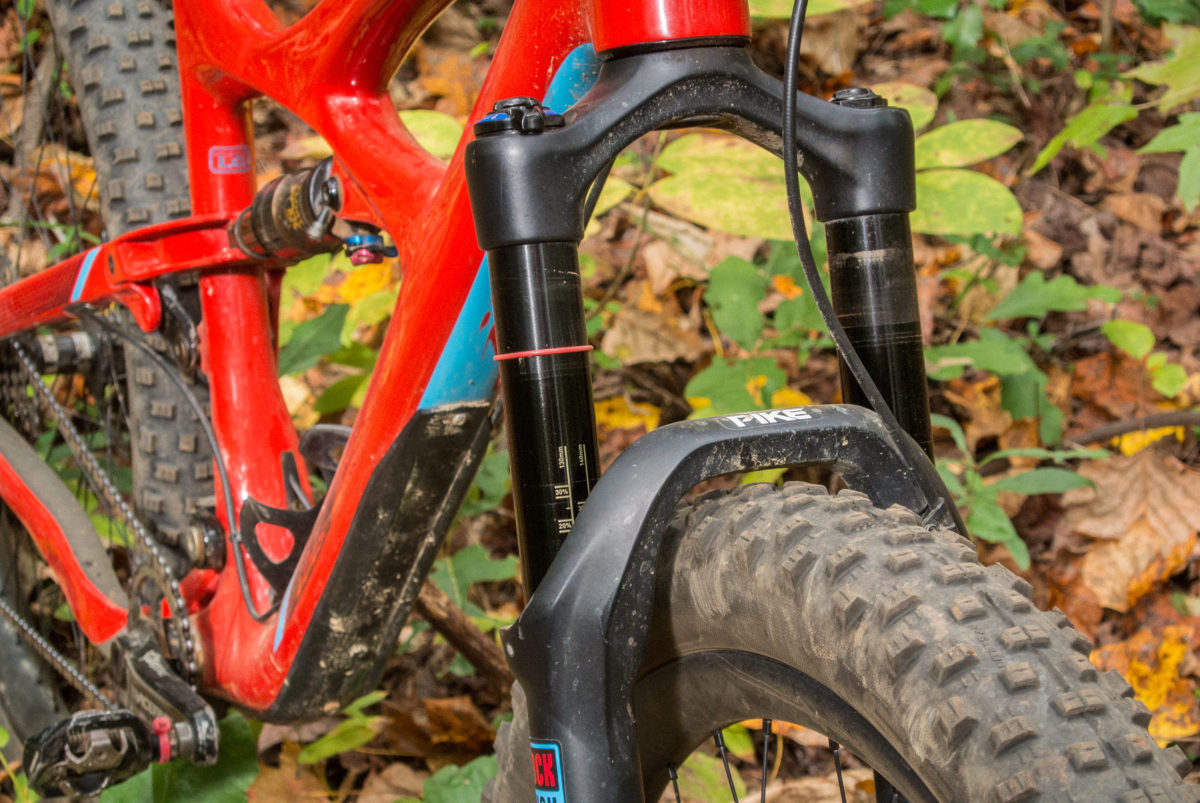 The Mojo I rode was spec’d with a 140mm RockShox Pike, a Fox Float shock, SRAM’s X01 shifter and rear derailleur, RaceFace Turbine cranks, SRAM Guide brakes, a Thomson stem, and KS LEV dropper. Retail for this spec is $6,200, but that doesn’t factor in the upgraded wheels. 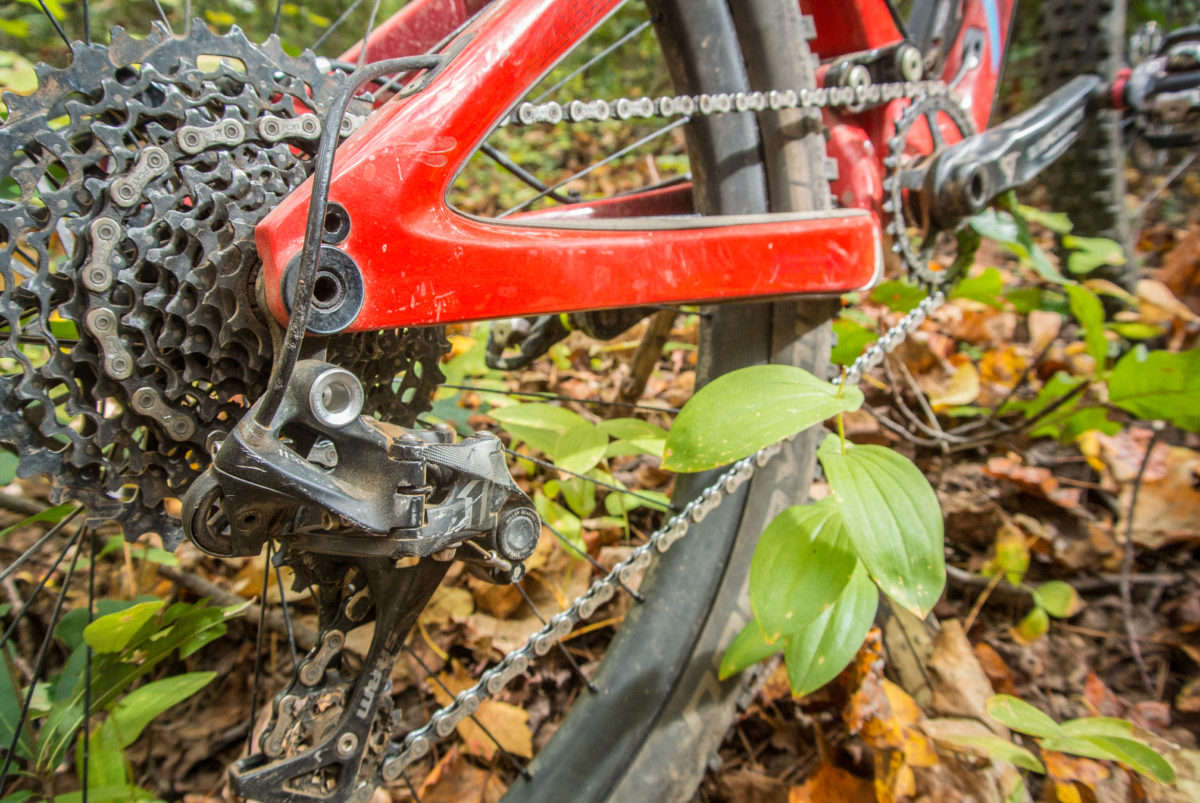 As soon as I jumped on the bike, I thought it felt small. I hopped off to check that I was in fact riding a size large frame. Checking the geometry chart after the fact, I learned that the reach on the large Mojo 3 is 438mm, a full 22mm shorter than my personal bike. When Ibis redesigned the Mojo, they made it slacker with a 66.8 degree head tube angle, and shortened the chainstays to 425mm, but they didn’t stretch out the top tube as far as some other brands.

However, once I made it through the first couple of turns, I forgot all about the tire size, the spec, and the geometry. I was too busy trying to find the limits of traction, boosting every little rise, and generally hucking everything in sight – all with a shit-eating grin on my face. In general, I’ve found plus tires to offer marginally better traction, not the life-changing-oh-my-god-this-is-insane traction many have claimed. Well, whatever is in Mojo’s sauce had me riding like a superhero. I would throw myself into corners thinking, “surely this will make me slide out.” Nope. Corner after corner I was laying the bike farther and farther over – and coming out upright.

I try to avoid hyperbole – especially when we’re talking about a short test ride – but to me, the Ibis Mojo 3 is the best plus bike I have ridden to date. And the reason I liked it so much was precisely because it didn’t feel like a plus bike. It felt like a light, playful, mid-travel trail bike with ludicrous traction.

If you’ve doubted the merits of plus bikes, swing your leg over a Mojo 3. 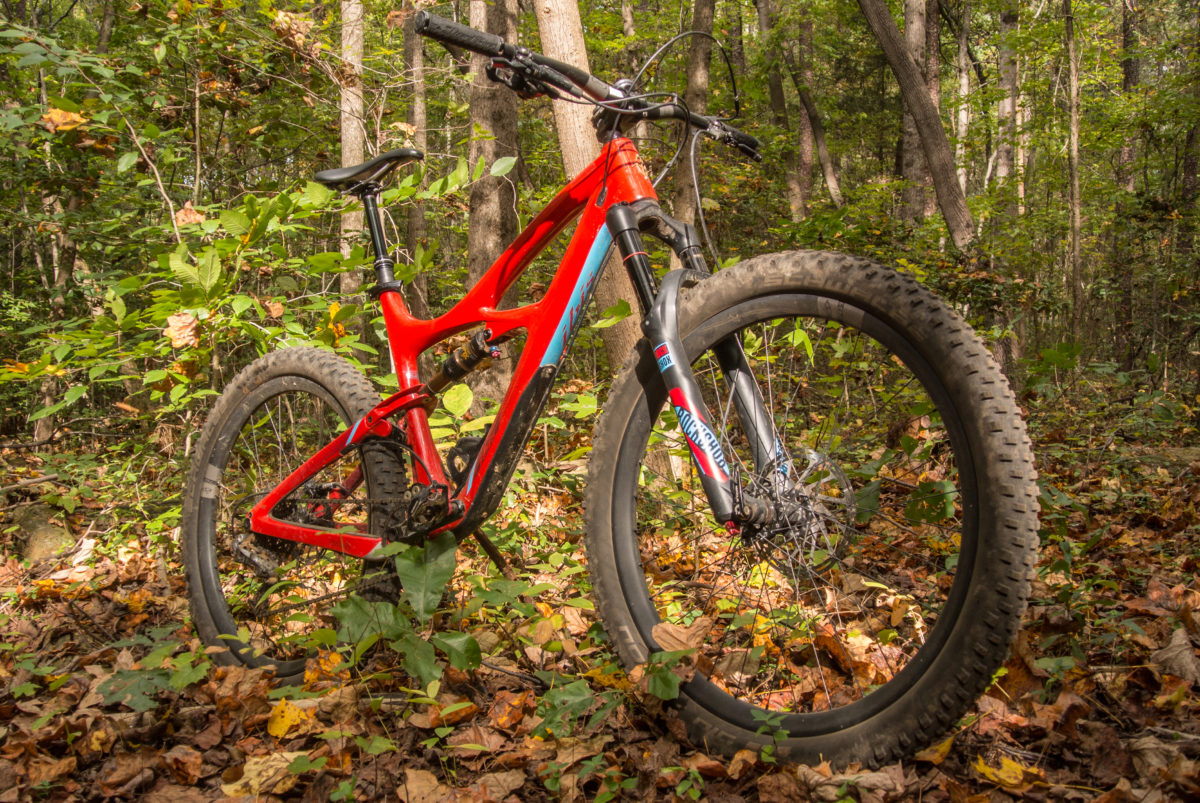 I love my 2012 Mojo HD, and it of course is even shorter in the reach. The Mojo really is an awesome bike.

With short reaches over the years the Mojo is probably a good candidate to go a size up. Sounds like that might still be true. Quite similarly in terms of bikes with short reaches, we went a size up on a used Pivot Firebird for my oldest son, and it is a great fit for him. That Firebird is a BEEFY all-mountain bike. It can handle whatever a mountain will throw at you. Somehow it climbs really well, even though it is a bit heavy and has 180mm fork on front.

True, I was thinking it would be nice to try the XL as well. Although even going a size up, it’d still be 5mm shorter than my Kona!

More than anything though, I’d like to try the large Mojo 3 on some more demanding terrain to see how it does during sustained high speed descents.

I had to get a 160 36 front fork on my Mojo before I was comfortable on it on my terrain. I haven’t been on a Kona yet, but really want to give one a try. However, I have a short torso and short arms, so I’m guessing that some of these new reach measurements like on the Konas and Yetis would just be too much for me.

Mongwolf,
You may be good on a Kona as well–even they tend to run shorter than average in the top tube. Even running a little longer on newer models still only brings them up to average on most models.

Yeti’s on the other hand are always long or at least long-ish.

@John Fisch you must not have looked at Kona’s closely over the past few years. Their bikes are looooooooooong. My first generation Process has a reach of 460mm for a size large. The 2017 version of the same bike now has a whopping 475mm. Which sounds crazy to me.

For comparison, the current size large Yeti SB6 has a reach of 447mm. Yetis gets credit for being one of the early companies on the LLS geometry train, but they are by no means at the long end of the spectrum any more.

Sounds like a blast of a bike. I’ll have to demo one soon.

This bike handles high speed knarley descents beautifully. I demoed one on Tuesday and was really surprised. Climbing rock faces and knarl technical stuff on the way up it performed very nicely. I cleaned a few sections I thought I had no shot at, it was so fun! Coming down at speed the bike floated over the boulders like they were not even there, and it was poppy as well. I was popping off every rock or root I could and it was amazing! The name mojo couldn’t be more appropriate for this bike and now I must make the very difficult decision should I go with mojo3 or Santa Cruz 5010?