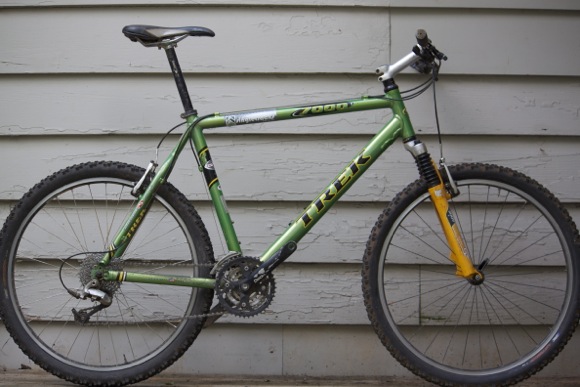 In early 2000 I was preparing to graduate from college and decided it was time for a new mountain bike. After browsing the local shops I fell in love with an electric green and yellow Trek 7000 hardtail. At one of the shops I visited the sales clerk said the geometry was all wrong for me–that a Specialized model would work much better. But I was determined to own a green Trek and wound up purchasing mine at Higgins Bicycle and Lawnmower shop in Greensboro. 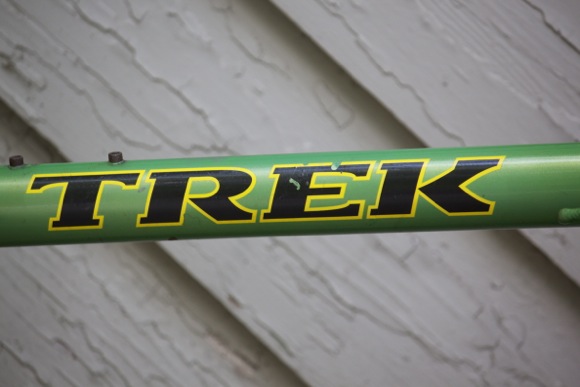 It was around this time that mudhunny and I got serious about building Singletracks.com and I chose trek7k as my handle for the website. I thought the name had a certain “hacker” feel to it and the recent hype about Y2K made using Roman numerals in place of thousands de rigueur. Plus, I figured it would be a pretty unique name I could use as my online identity on other sites as well.

Several months later I started my job in Colorado Springs with the Trek 7000 in tow and I rode the hell out of that bike! Slickrock in Moab, Trail 401 and Monarch Crest in Colorado, not to mention my near daily rides at Palmer Park and Ute Valley. And when I left Colorado four years later I continued to ride the Trek 7000 everywhere up and down the east coast from Florida to Vermont. 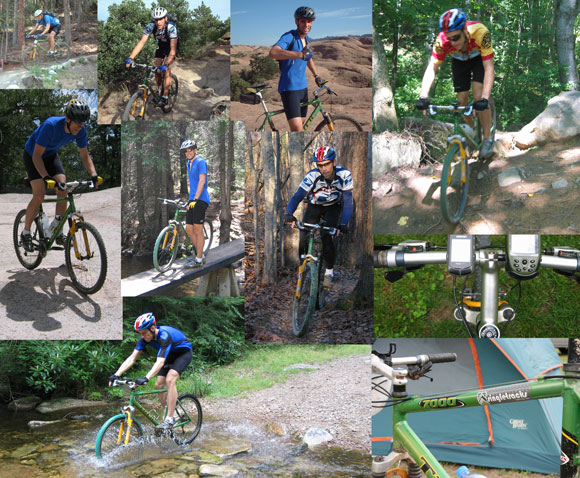 In 2009 I finally got a new bike–a 29er–and my Trek 7000 promptly wound up in the basement. About a year later I was getting ready for a group ride and realized my tire was flat and I didn’t have any 29er tubes so I ran to the basement to take the Trek 7000 out instead. As soon as I pulled it down I saw the brown, sticky oil coating the fork and my heart broke. Rest in peace Trek 7000.

The bike sat in the basement for another two or three years and I kept telling myself I’d fix it up. Dustin’s article about converting an old bike to a single speed got me motivated to do something with the Trek 7000 so I dusted it off and took stock of what I had. But without the ability to run 29er wheels or disc brakes I quickly lost interest.

Soon after I got a PM from a guy named Derek on the Singletracks forums asking about the bike and I immediately knew I wanted to give the bike a new home. The best part is that Derek has similar stories and fond memories of his first Trek 7000:

I have had my green TREK 7000 since my freshman year of college, and I was pretty certain it was bomb-proof based on the things I put it through it always seemed to come out of wrecks more intact than I did.

I started upgrading as I started wearing through/breaking the stock components. I tinkered with the different technologies as mountain biking evolved. I spent most of my time riding in Colorado, and started to slack off when I moved to the Midwest. As life went on, mountain biking played second fiddle to family and lacrosse. When I finally moved back to the west (SLC), I am ashamed to say that I only rode a few times, and never truly got back into it.

I have since moved to Cincinnati and lo and behold, I start riding here and really feel like I am getting back into the sport, albeit riding hills instead of mountains… I was riding enough that I took the bike in for an overhaul (it needed it) and received a call from the tech that my frame was cracked. I headed to the bike shop to check for myself and he was not kidding. We reminisced for an hour about reverse spring deraileurs, and other components from the old days. Goofy as it is, I told stories about the scratches and dents like it was the passing of a friend. 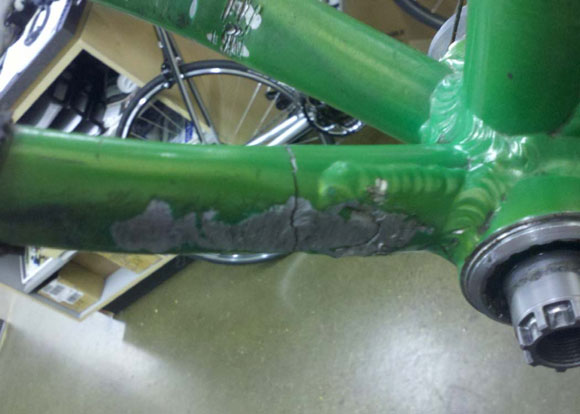 Nostalgia aside, Derek intends to keep shredding on the Trek 7000:

I love this frame’s geometry, it fits me perfectly I do not know what makes some bikes fit one person and not another, but somehow this bike has come together with all its parts and pieces to be the absolute best fit for me. I have hopped on many other bikes, rentals/demos/friends’ bikes, etc, and I have never felt comfortable. I was worried I was going to be on an endless search for something that fits me. I also was reluctant to drop a large chunk of change on a new bike when I was just getting reacquainted with my old reliable Trek. 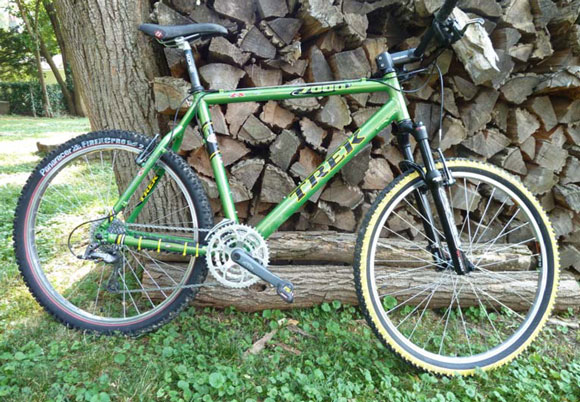 The Trek 7000 re-built and ready for action!

After sitting neglected in the basement directly underneath my home office, the Trek 7000 has a new lease on life and I couldn’t be happier to see the bike back on the trail!

So, now that the bike has moved on I figured it’s a good time for me to move on too… to a new Singletracks screen name that is. Like Lance Armstrong once said, “It’s not about the bike,” so instead of trek7k I’ll just be jeff on Singletracks. Long live the Trek 7000!

In 1999 the Texas ladies state xc champ worked at an LBS that didnt last too long but while it was open she sold me a Trek 7000 Blue and Gold. She also told me it seemed wrong for me BUT I had picked it out of a magazine and by gawd I was going to have it.

I put thousands of miles on it at BLORA on Fort Hood and at Dana Peak–the trail on the other area lake.

Loved that bike. Even though I found a black and gold Giant XTC SEII that really was wrong for me I took both to Hawaii—where after Iraq I promptly found my full suspension stumpjumper.

I gave scary fast (the trek 7000) to my best riding bud on Oahu and, similarly to the fully rigid Scott Racing Comp I had in 97 in Baumholder, sold for Cheap at pawn shop.

The stumpie still goin strong going on 7+ years but I am lusting after a Pivot now.

That Trek 7000 to this day is still my fastest times at BLORA. I havent been able to approach 9.50 to 10 MPH at this rock (minefield) laden network since.

Congrats on finding a new home for your old MTB!

I recently inherited my Dad’s original Trek 8000, the same Trek 8000 thats taken part in 3 Moab 24’s, 2 BC Bike Races, and 7 Kona 100’s. It’s got the dents and scratches to go along with the accolades, but i’m glad to say i’ve put it into service as a bull bared singlespeed. The feeling of revitalizing a long forgotten bike is like no other.

Love this article. My first bike was a ’91 Trek 7000 that has been sitting in my parents garage for 15 years. I’ve just recently began restoring it so that my father could take up some light riding, and I really look forward to seeing it on the trails again.

that is the Giant I sold cheap—just like the Scott—and it was at army base thrift shops–not pawn stores. lol. I must be tired. Gettin old at 50 almost.

Old habits ingrained I suppose. I bought a trek 3500 from a guy pretty hammered but not a scratch on it. Wierd, I know. New axles, rims, and a few custy add-ons and it has been my favorite bike so far! Been from Southern Oregon to Jamul, CA. with this bike. And the destination list has only begun!

Back in 1985 I bought one of the first production MTBs, a Specialized Stumpjumper. I had come from a heavy road bike background and the Stumpy re-awakened the joy I got as a kid riding my BMX bike on the dirt. There was no such thing as suspension, either front or rear, no disc brakes, no 8,9, or 10 speed cassettes. It was a triple chainring, 5 speed cassette, cantilever brakes havin’, fully rigid, righteous piece of bicycle engineering! I had never been so excited about a bike before! Fast forward about 25 years and now I’m riding another righteous piece of bicycle engineering, a 2009 Yeti ASR. During a 24 hour race I managed to break the right chainstay on the carbon fiber rear end at about 3 a.m. While I waited for a replacement part, I was dying to get back out on the trails, so I dusted off the Stumpy to see what she had left in her. The frame was huge, much too high for safe clearance for the old family jewels, but I cleaned her up and took her out on my favorite trails. On my first ride I was able to make it up a super-steep, super-loose hill that I had never cleaned on the Yeti. I had to pick my lines much more carefully with no suspension, but I really enjoyed the ride and ended up riding it exclusively for over a month. I got lots of funny looks and comments out on the trails, but I had a blast and couldn’t have cared less what anybody else thought. Once I got the Yeti back in operation, I started using the Stumpy as my indoor training bike with my rollers, and have been using it ever since. Some of those “old school” bikes were so well designed that they are still relevant today, techology be damned! I’m glad to hear your beloved 7000 has found a new home and is still out there shredding the trails as it should be!