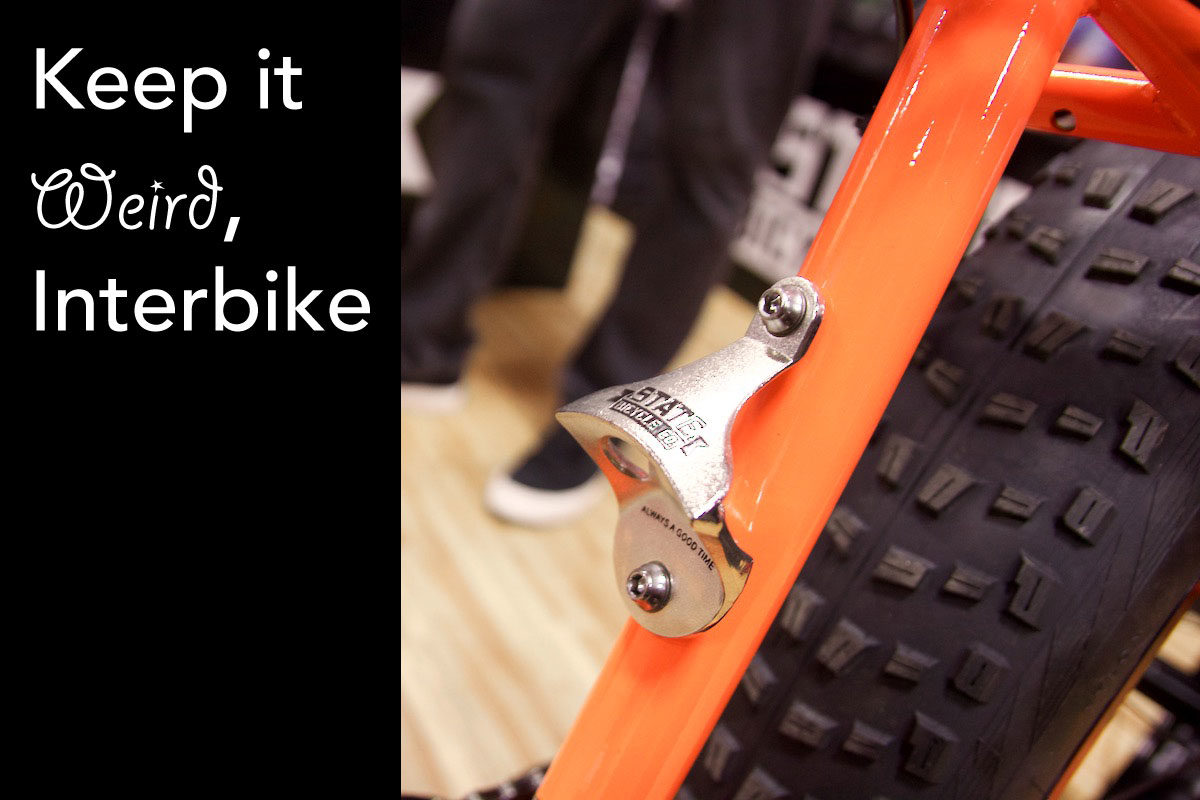 Interbike tends to be dominated by some of the largest brands, but if you look closely, there are many small companies doing interesting and oftentimes weird things. Here are just a few examples from this year’s show. 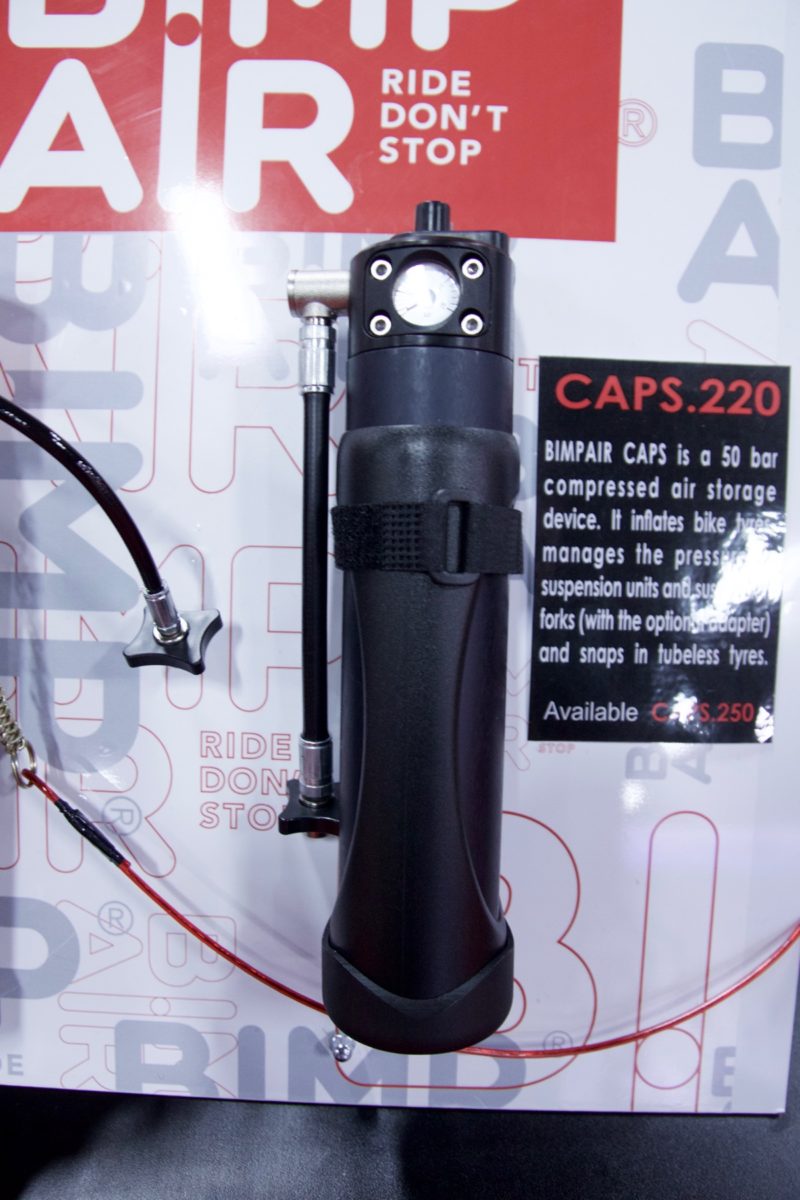 BIMPAIR is a two-part bike tire inflation system that seeks to eliminate CO2 cartridges and provide a “fully autonomous” experience. The first part of the system is the CAPS air storage device that can hold 50 bar (725 psi) of compressed air. Similar to the Airshot, CAPS can be charged before the ride to provide inflation similar to the way a CO2 cartridge works. 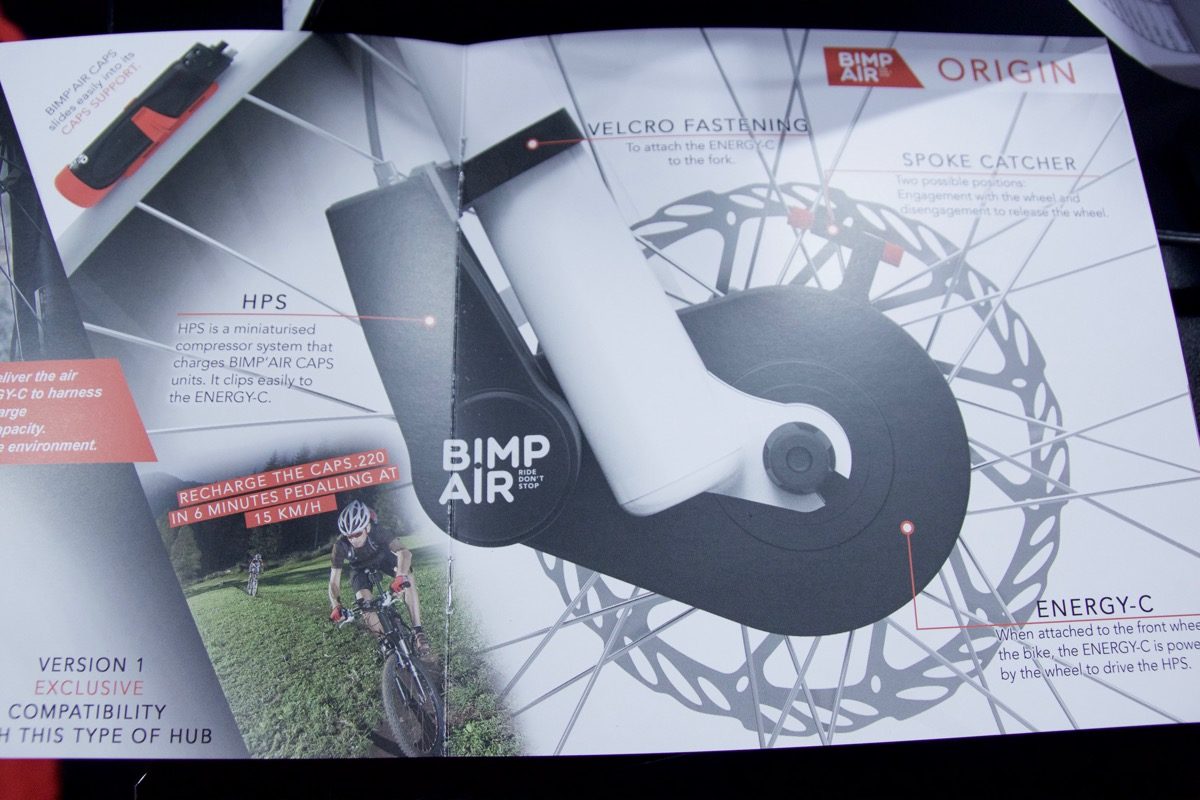 But what makes BIMPAIR really unique is its ability to recharge itself during a ride thanks to a wheel-mounted generator. BIMPAIR says the CAPS storage device can be refilled in just 6 minutes of riding at an easy pace.

The company says this system is ideal for those who are riding in remote locations or on multi-day trips where self-sufficiency is important. Compared to a mini-pump, the BIMPAIR is heavier, but it should make mounting tubeless tires in the field a cinch. And compared to CO2, the BIMPAIR is rechargeable, but again, it’s heavier.

There was actually another company at Interbike showing a rechargeable tire inflation system, and the system from White Crow (animated above) takes the idea to the next level, with the ability to add or release air pressure during the ride without getting off the bike. I wasn’t able to talk to the rep at Interbike because the company has been instructed not to talk to the media, but there is plenty of information about the system on the company’s website. 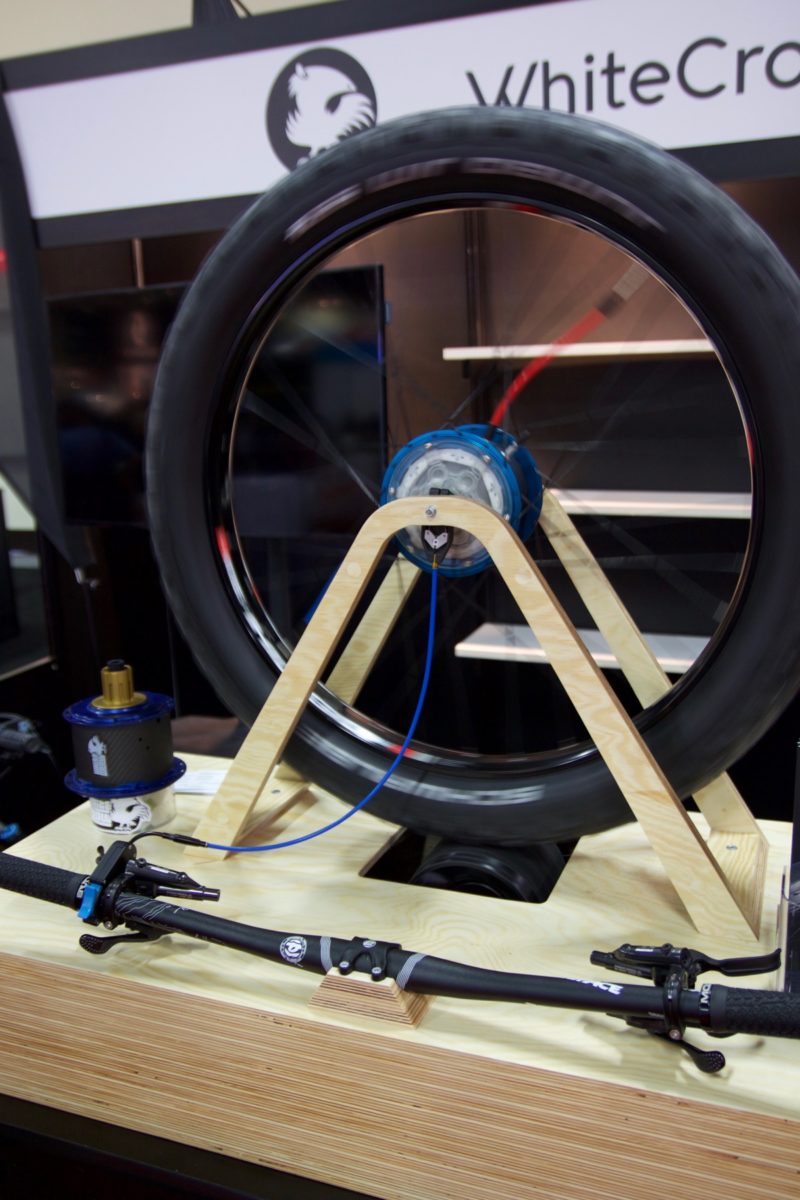 Essentially the White Crow system uses a hub-based compressor/recharger, feeding the compressed air into a reservoir that’s mounted inside the tire. At the press of a handlebar button, air from the reservoir can be released into the tire to increase pressure. There’s a second button that releases air from the tire to decrease the pressure. Because the system is constantly charging, in theory you can add and release air pressure as many times as you like during the ride.

The benefits of being able to change air pressure up or down during a ride are pretty obvious. Ramp up the pressure for hard surfaces or climbs, dial it down when the trail gets gnarly or loose. 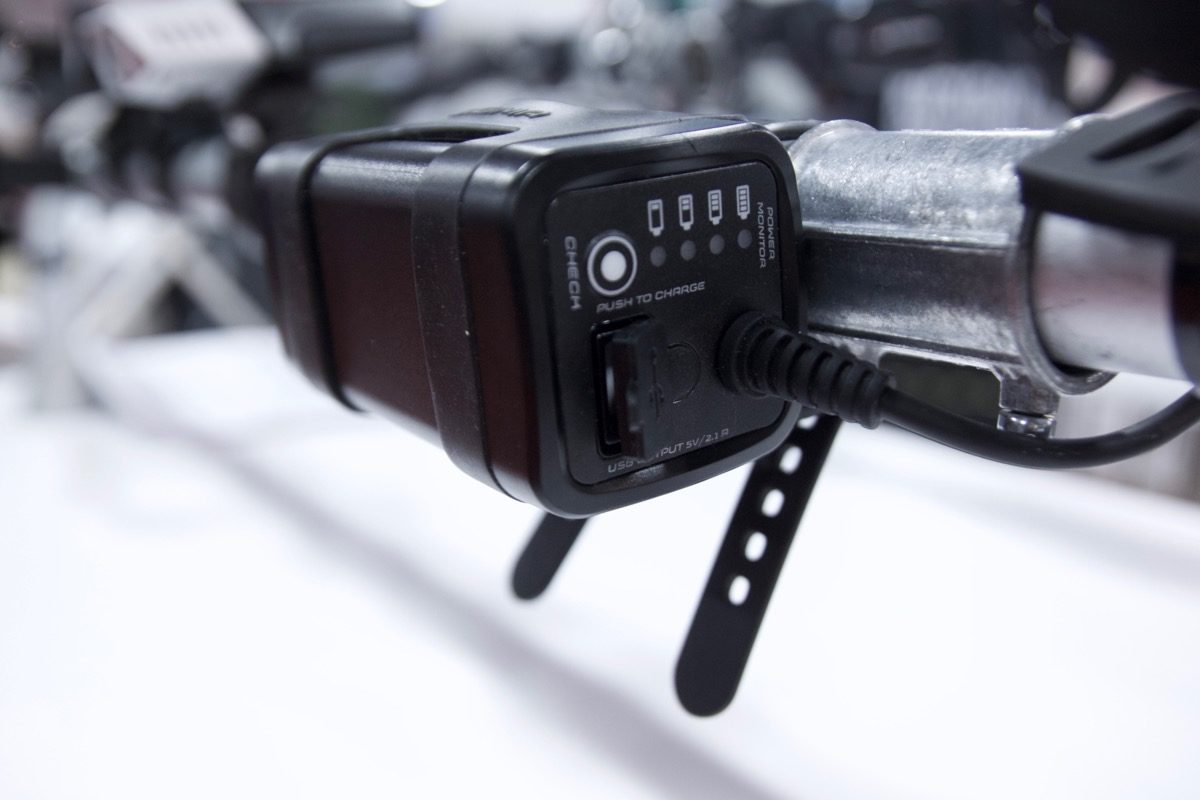 Sigma Sport had a number of bike computers on display, but what caught my eye was the new Buster 2000 bike light. The light pumps out up to 2,000 lumens, comes with a wireless remote, and offers 2.5 hours of runtime on high. But perhaps the most interesting thing is the USB port on the battery pack that allows you to charge a phone or other USB device like a GPS. This is a big battery so it should have plenty of juice to power a phone in an emergency situation. Besides, many of us would choose a dead light over a dead phone any day of the week! 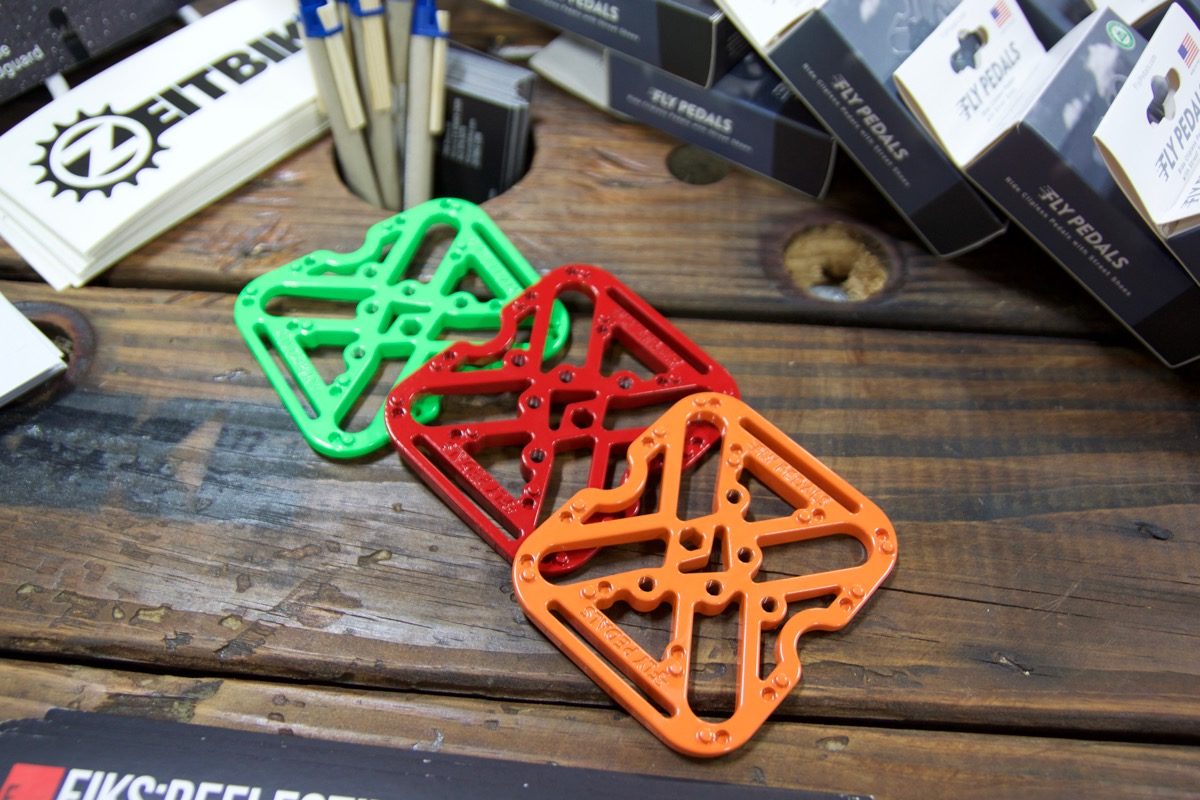 If you’ve ever purchased a bike with clipless pedals, you’ve probably seen the plastic inserts inserted into the pedals to make them into flats. Well Zeitbike has an upscaled version of these inserts called the Fly Pedal, and it uses your pedal cleats to make this a universal design, no matter what type of clipless pedal you’re running. Just screw your cleat onto the pedal just as you would your shoe, and attach the cleat to the pedal!

Fly Pedals are made from lightweight aluminum, though sadly they don’t appear to be threaded for pins. 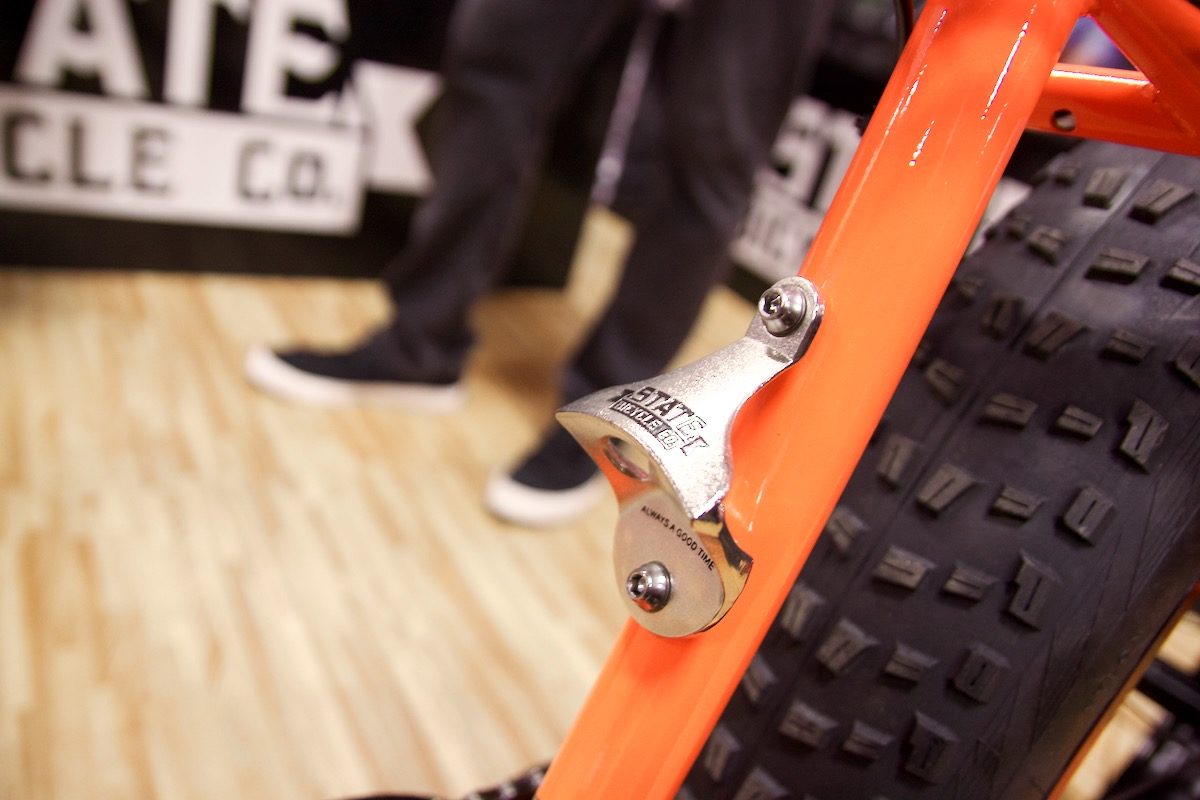 There’s a good chance this has been done before, but I’ve never seen it: a water bottle mount-compatible bottle opener from State Bicycles. If your bike has two bottle mounts, be sure to get one of these to go with a Salsa Anything cage to carry that bomber back from your favorite bottle shop. 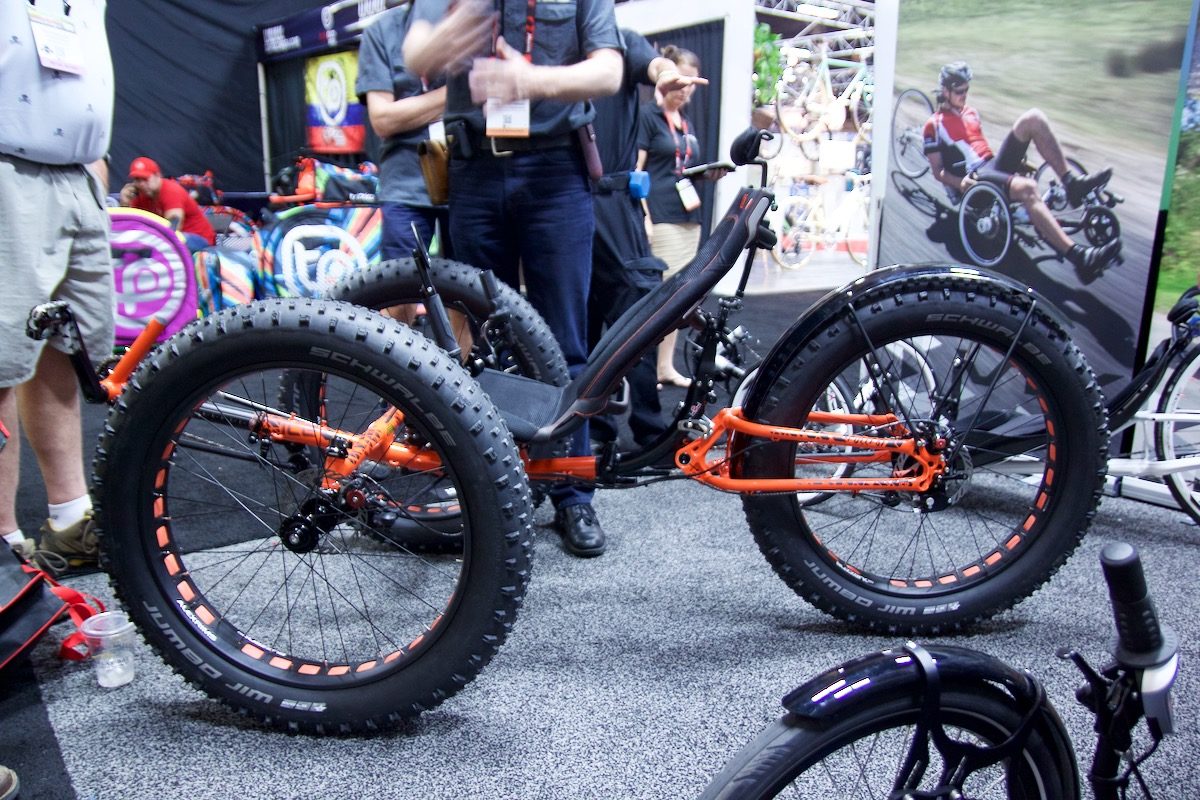 And finally, this. Because fat bikes.

Gear
When a Hip Pack is Really Just a Fanny Pack...
Gear
The Latest Mountain Bike Tires from Maxxis: Pace, Tread Lite,...
Gear
4 Tips for Converting Your Fat Bike Tires to Tubeless
Gear
27.5+ Tires: These Are for Your 29er