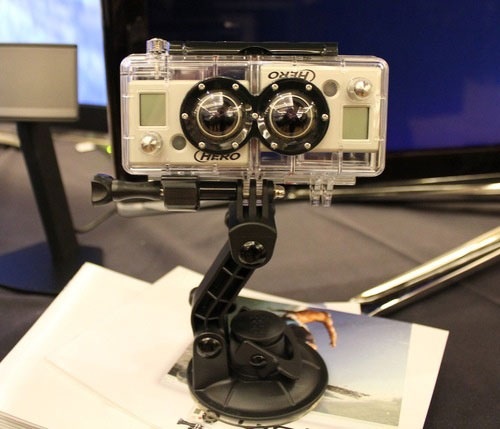 We’re not sure whether to call this totally awesome or completely uncalled for. At CES GoPro announced a 3D version of their popular Helmet HERO helmet camera that promises to record all the action in 3-dimensions. Sadly there’s no info on the official GoPro website yet but from what we’ve read on gizmodo and other gadget sites, the camera is basically two GoPro’s that are synced together to produce 3D video. No word on what type of computer/TV you’ll need to view the videos or whether 3D glasses are included.

GoPro also announced an add-on LCD viewfinder/battery pack that can be attached to a basic (viewfinder-less) helmet camera.

It turns out that GoPro actually isn’t the first company to announce a 3D helmet camera. In fact, Tachyon has been selling the XC for over a year now. The Tachyon XC has two lenses just like the GoPro 3D and you can view the resulting videos on your computer using old-fashioned red and blue 3D glasses.

Now, the question is: who wants a 3D helmet camera?

I for one would love to get my hands on a 3D camera….the possibilities are endless if you’re and outdoor adventure freak with a creative flair. Image how a branch passing one inch from your head would look like or how a panoramic view would feel like watching it in 3d. If you only mount it on your helmet you would be under utilizing its potential. However, you make a good point about weather the market is ready or able to view your creative works. – Manny

I wouldn’t care for it. I’ve seen a few 3D movies the last couple of months, and I’ve decided (as have most people I know) that the 3D effect doesn’t add anything to the movie, but it can take away. It’s not really 3d, stuff doesn’t actually look like it passes by you, there’s just several different depths of picture in front of you.

My eyes only seem to focus on one depth at a time, making everything else blurry. Some movies are better than others. Alice in Wonderland was especially blurry, and Jackass 3D was actually the most clear of all 3D movies I’ve seen (even though I often wished it wasn’t!!!!!)

But who know, I’m sure it’ll keep getting better, especially as people think up better/more creative uses for it.

I think this is over kill, and I don’t really think it would enhance the experience for a mountain biking movie.

I loved Avatar in 3D, though!

I bet that is bulky!