This is the second half of an article examining the effects of wet weather racing and the policies that need to be in place to protect trails from extensive damage.  Read Part 1 right here.

Plan B – The Other Plan

If the trails are too wet to handle the abuse from a race, Plan B is what a race promoter will do in order to compensate. This is where trouble arises, because often there isn’t a Plan B in place.

Creating a backup plan should be part of the early race planning process, because if there is no good Plan B and the weather turns sour, then the race probably shouldn’t happen at all.

There are a lot of options for Plan B.  Rescheduling works well for smaller, mostly local races – simply push the event back a week.

For bigger events rescheduling may not be an option, and if a race does have to be rescheduled the event promoter needs a well-defined plan of how racers’ entry fees will be handled. Racers also need to be aware of that policy before laying down their money.  Most races open pre-registration (and often sell out) months before the event. At that time, there’s no way of knowing what the weather will be like on race day.  When race day gets near and is preceded by a week of rain, and the race is postponed, some of the pre-registered riders won’t be able to make the new date.  Do they get a full or partial refund? 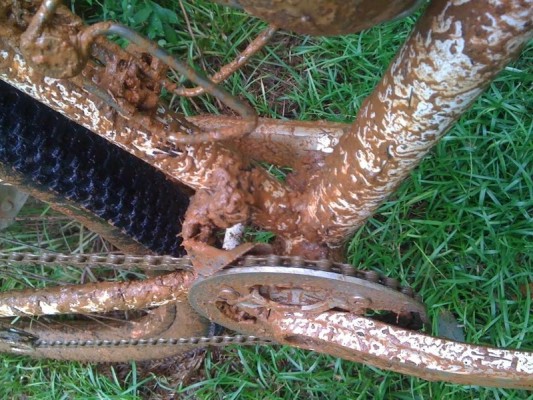 Riding and racing in the mud isn’t just bad for the trail, it’s bad for your bike, too. The grit works its way into bearings, pivots, anything that moves, and wears it out much faster.

If a race is planned, and then canceled due to rain, the promoter is still out money. All sorts of expenses are paid for prior to the race happening (permits, insurance, supplies, etc.) and often aren’t refundable if the race doesn’t run. So should the promoter simply take the hit and give everyone a full refund?  Gambling that much money based on fickle weather patterns is risky, no matter who you are.

Another option is a partial refund: the promoter keeps enough of the race fees to cover their expenses (so they break even), and then everyone gets a pro-rated refund.

Or, there could be no refunds offered.  For an advocacy organization, a big event may be the major source of their income–income which is used to buy tools and supplies to maintain the trails in their area. The money doesn’t go into anyone’s pocket–it goes back to the trails. In such a situation, denying refunds, and telling racers to consider it a donation to the club, isn’t a terrible option.

Our club hosted a 13hr race a few years ago, coincidentally at Hickory Knob State Park, and it was rained out.  The club had a well-defined rain policy that was outlined on the event website, and they followed it.  The race was postponed a week. When they weren’t able to make the rain date, several racers got very pissed off about not getting a refund, and very vocal about their frustration. But, when they signed up, those racers agreed to that rain policy, so their frustration when said policy was followed was completely groundless. The promotor needs to be ready for this type of response.

Plan C – The Other Other Plan

What happens if the weather changes during the event, and the trail is no longer able to withstand the demands from the race? This could happen if, say, there is a torrential downpour five hours into a 12-hour race. For just such a situation, there should also be a Plan C in place – a plan to protect the trail if conditions change during the event.

Generally, stopping the race early is the only option.  Putting everyone onto an alternate route usually isn’t possible, unless it’s a single loop or point-to-point race and the change can take place ahead of the race leaders. Everyone needs to ride the same course, otherwise it’s an unfair competition. 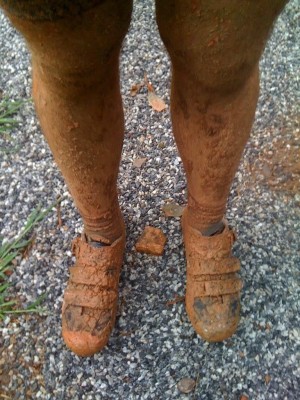 My legs after the 2010 Fools Gold. I had to replace my brake pads, brake rotors, bottom bracket, and pedals. I got off easy.

The 13hr race our club hosted at HKSP, which had already been postponed once due to rain, had a Plan C situation arise during the middle of the race.  Heavy rain set in about an hour or two after the starting gun went off, and around hour three it was clear the trail was taking a substantial hit. So, the race was stopped early.  Racers were okay with the decision, as they could see riders coming into the finish area coated in mud and knew the trail was being damaged. There were no complaints. Similarly, the disastrous 2010 Fools Gold was stopped early when the pro race leaders finished their first lap and begged the promoter to stop the event, which they did.

Who’s job is it to say “no” and stop, postpone, or alter a race?  The land manager?  The race promoter?  Another way of asking the question is, who’s to blame when a race isn’t canceled, and that decision results in substantial trail damage? 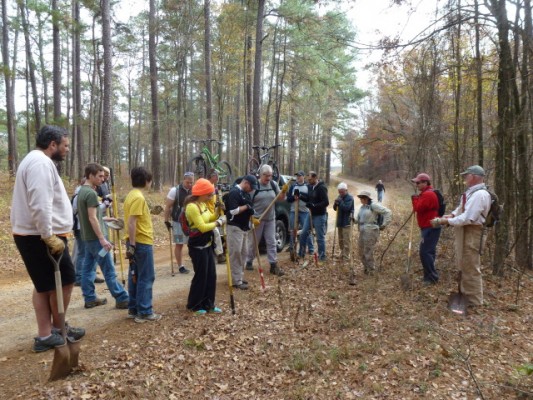 The people who volunteer to help maintain trails should be involved, or at least consulted, when planning a race. Race promoters should be careful not to piss these people off.  Photo: Angela Allen

Answer: it’s everyone’s responsibility, and everyone is to blame, including the racers. This is tough. No one wants to cancel a race. A lot of planning and preparation took place for months leading up to the event.  Racers have been training, spent a lot of money to enter the event, and traveled to get there.

While in the ideal world the racers would be conscientious enough to not race if the conditions are bad, the truth is if the race isn’t canceled, most riders will still go out and race anyways. I know, because I’ve done it. I was at the 2010 Fools Gold and spent 6.5hrs riding through peanut butter-thick mud in the rain before finally quitting and taking gravel roads back to the finish area.  I knew it would be muddy, but I paid $100 to race, took time off of work to travel, and had been riding a ton for training–I felt like I was too invested to walk away. It’s a mistake I hope to never make again.  I vastly underestimated just how muddy the course would be, and the repairs to my bike more than doubled my total “race expense”… and I got off easy.

All parties involved need to agree to work together to make the decision to cancel.  The land manager gets the ultimate say, but the race promoter should take it upon themselves to stop the race if needed. If there’s a volunteer group who maintains the trail, they need to be a part of that conversation, too.

As I said earlier, the point of this article isn’t to place blame or point fingers at anyone, because most of us are guilty of racing or riding when we shouldn’t have. Hopefully this article has shed some light on the many different factors that need to be considered when planning a race, and shows how important a well-defined plan truly is.  It’s all about weighing the risks against the rewards, and trying to minimize the negative side.

A mountain bike race is great family fun! It can bring people of all sorts of backgrounds together for a day or weekend of fun, bring visitors to town to boost the local economy, raise money for a cause, and improve the trail system it uses.  But there is always the risk of damaging the trail, preventing other races from happening there ever again, and potentially having the trail shut down for good. Trails are resources that should be managed with an eye towards the future, and that may mean canceling a race one year so it can continue for years to come.  And finally, we should all accept the responsibility and sit a race out when it’s the right thing to do, not just when the promoter or land manager cancels the event.

When the weather is good and the trails are dry, I’ll see you on the start line!

Your Turn: What’s your take on wet weather racing? Who do you think has the ultimate responsibility for canceling a race or enacting a backup plan due to inclement weather?

Videos
Better Mountain Bike Drops In 1 Day: How To Drop...
News
Bentonville Crowns Itself Mountain Biking Capital of the World™
Gear
MTB Gravity Pants from DHaRCO Just Might Replace Your Favorite...
News
Transition Debuts Their Lightest Mountain Bike Yet With the 120mm...