Ahh, heat waves. They’re good for a lot of things…heat strokes, heat-related deaths, increased energy bills, drought, wildfires. The list goes on. Ok, maybe they’re not all that good. Anecdotally though, 100° days are a good incentive to get out of bed earlier and go for a ride before it gets too hot.

Maybe you’re someone who doesn’t mind a little bit of suffering on top of your suffering, but I think mountain biking is challenging enough on an 80° day, and heading out in the afternoon, after work, and feeling like an ant under a magnifying glass is not my cup of cocoa. I’m also more of a wake up, get a few things done, and read while I have coffee before I do anything else type of person, so this time of year, it’s a battle of priorities.

Alas, it’s been damn hot here the past two weeks and it doesn’t look like it will let up, meaning that mornings will likely be my dedicated ride time for the next few months. As I was spinning along the other morning, watching birds flutter about, and rabbits pounce along I thought, “hey, this isn’t so bad.”

Everyone on the trail seemed to be in a better mood than they would be in a few hours. Maybe because they’d carved out an hour for themselves before that hour had been lost to social media or emails; things that could wait for a few minutes or the stressors of the new day haven’t completely wrapped around them yet.

Some research suggests that people who work out in the morning instead of later in the day are more productive throughout their day, more alert, make better health choices throughout the day, and all these other points which make for great listicles.

There’s also a point of pride when you can get out of bed before anyone else in the house or on the block, get an hour workout in, and roll back, ready to take on the entirety of the day as they’re just rolling out of bed. In Admiral McRaven’s much-quoted speech to a graduating class at the University of Texas, he stresses the importance of making your bed every morning and how that task completion will lead to other successes in the day. By that logic, an hour-long workout at the break of dawn seems like recommendation number one in a ‘how to steamroll your day’ seminar.

So for the next few months, the summer heat is a reminder to bear a little discomfort for the reward of a more enjoyable ride. Waiting even an hour means that the workout could be 15° warmer, and while some might welcome the extra hour in bed, mountain biking always feels like a game of sacrifice vs. reward anyway, so I might as well get spinning.

Around Phoenix you need to see this at the beginning of your ride, or you’re going too late! 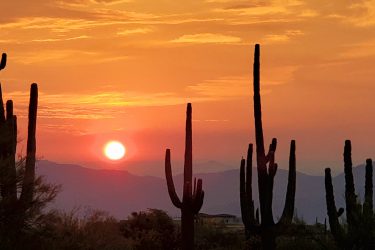 Dawn Patrol is the shiz but keep it quiet.

I ride in the morning most of the time from April through September. I am a bit on the old side so, I do some stretches before hand to be good and loose. I prefer the mornings since the wildlife is still somewhat active and the birds are singing.

It heats up fast in the desert. I ride near sunrise all summer. Trails are never busy then.

No thank you. It’s plenty hot here in NC but morning rides in the NC woods mean eating hundreds of spiderwebs.

Just yesterday I rode in 90 degree weather and continue to accept the fact that yet it’s a tad warm it makes cooler days more appreciated. I was out for 2.5 hours and appreciate the full venting on my helmet to include wearing a sleeveless shirt. Having all 4 seasons allows for a very versatile set up that said it usually mind over matter. I have the opportunity to ride nearly every day and figure that a hot day riding is way better than not riding at all.