It happened again. On my second trip to Whistler in two years, I needed a break from the chaos of the Whistler Bike Park after two days. Maybe it was the dusty trails, the sun-beat lifts, or the occasional traffic jams. Maybe I just felt guilty after spandexing and building base miles all year, then doing nothing but park riding for a trip. Or, maybe I’d heard that the trails outside of the resort are just as good as the trails inside.

Either way, for a reserved introvert like myself, the time outside the bike park was a great way to recharge my mind and deplete my legs.

In 2018, I put together a route that was about two hours long, but not quite worth writing about. After asking around this year for a better option, the Microclimate trail sounded like a good route for a sub-two hour ride. It was just enough time to get out and get my fix, and get back to “work.”

To access Microclimate, one must first pedal over to Blackcomb Mountain, just east of the Whistler Bike Park. The climb happens on the Blackcomb Access Road. It is stiff and steep. Although I was advised to take at least a 140mm bike for Microclimate, I took the new Santa Cruz Tallboy, which has 120mm of rear travel, with a 130mm fork.

The shorter-travel bike was a great choice for the sweat-inducing fire road and I settled into a good cadence and chugged away. The access road is about two miles long, and gains just over 1,200 feet. Other riders and eMTBers leapfrogged with me up the way, before the access road isn’t accessible for bikes anymore.

At a certain point, mountain bikers are directed to Out of the Dust, as the access road above is still heavily trafficked by trucks. Out of the Dust is a short trail, less than a half-mile long that adds another 200 feet of climbing. It is tight, and switchbacks cut hard. When Out of the Dust runs out of length, mountain bikers then use the Microclimate Access trail, another short stint, before being dumped back onto an access road, and reaching the summit, if riders elect to drop into Microclimate, instead of continuing to Dark Crystal.

After I caught my breath, ate a snack, and watched others pedal, and push, and suffer their way up the final piece of trail to the start of Microclimate, it was time to for me to head down.

Microclimate wastes no time dropping elevation. After a short section that lasts less than thirty seconds, the forest canopy swallows light and the trail gets darker. The trail steps down abruptly and successively, putting rear wheels high above the front.

Although I felt that the Tallboy I rode that day had appropriate geometry and a slack enough headtube angle, I should have ridden a bike with more travel. Yes, the recommended 140mm, with modern, appropriate geo would have been a killer weapon. There was no point in turning around though, and I was still having enough fun trying to steer this ship down a hurricane.

I passed two other riders, one an athlete and the other a filmmaker, before I came upon an S-curved set of steep switchbacks, covered in cut roots. Each turn was a technical challenge that with the right mindset provided a playground of achievable progression.

The turns wound down lower and lower into the forest floor like a stairwell in a skyscraper. As it continued, I was faced with another dilemma. The trail and surrounding forest became prettier, more lush, and greener. On the forest floor were green and moss-covered logs with mushrooms popping from their bark. Sometimes I’ll gladly stop my flow for a photo to share with others and this was one of those times. 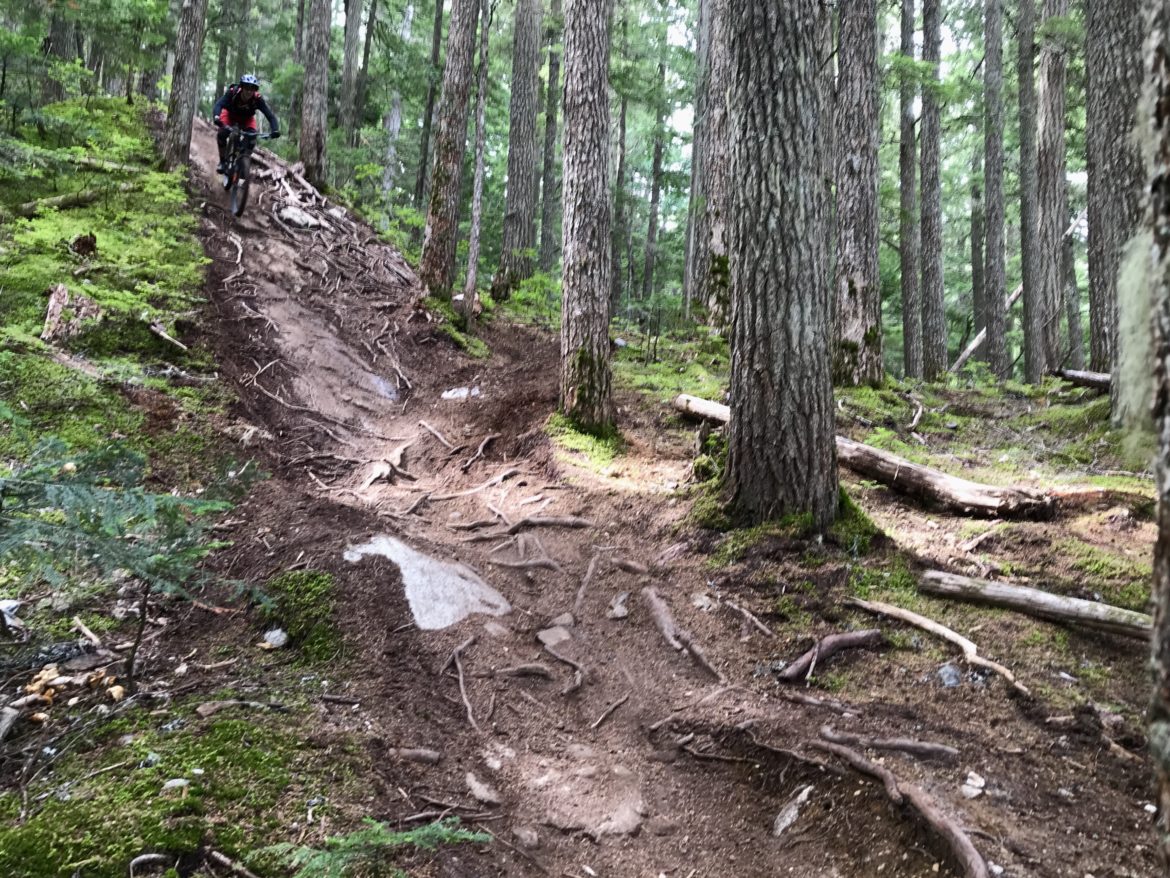 The tech continues lower in the trail. There are messy drops and fat rocks, and more tight turns. As I came upon one big rock fall, with a defined line between a hairnet of roots, I peered over my handlebars and sighted an exit point and let go of the brakes. As I stopped to look back, two more mountain bikers dove into the slab. 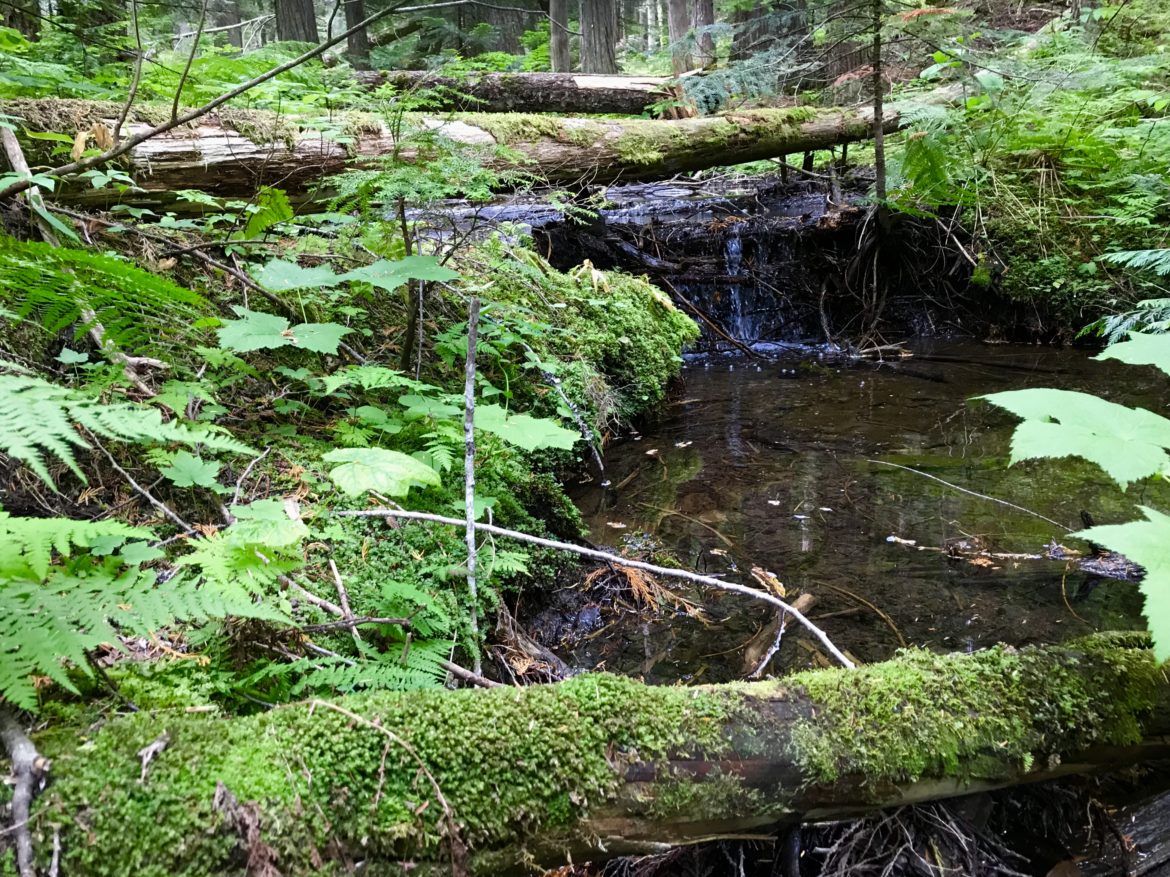 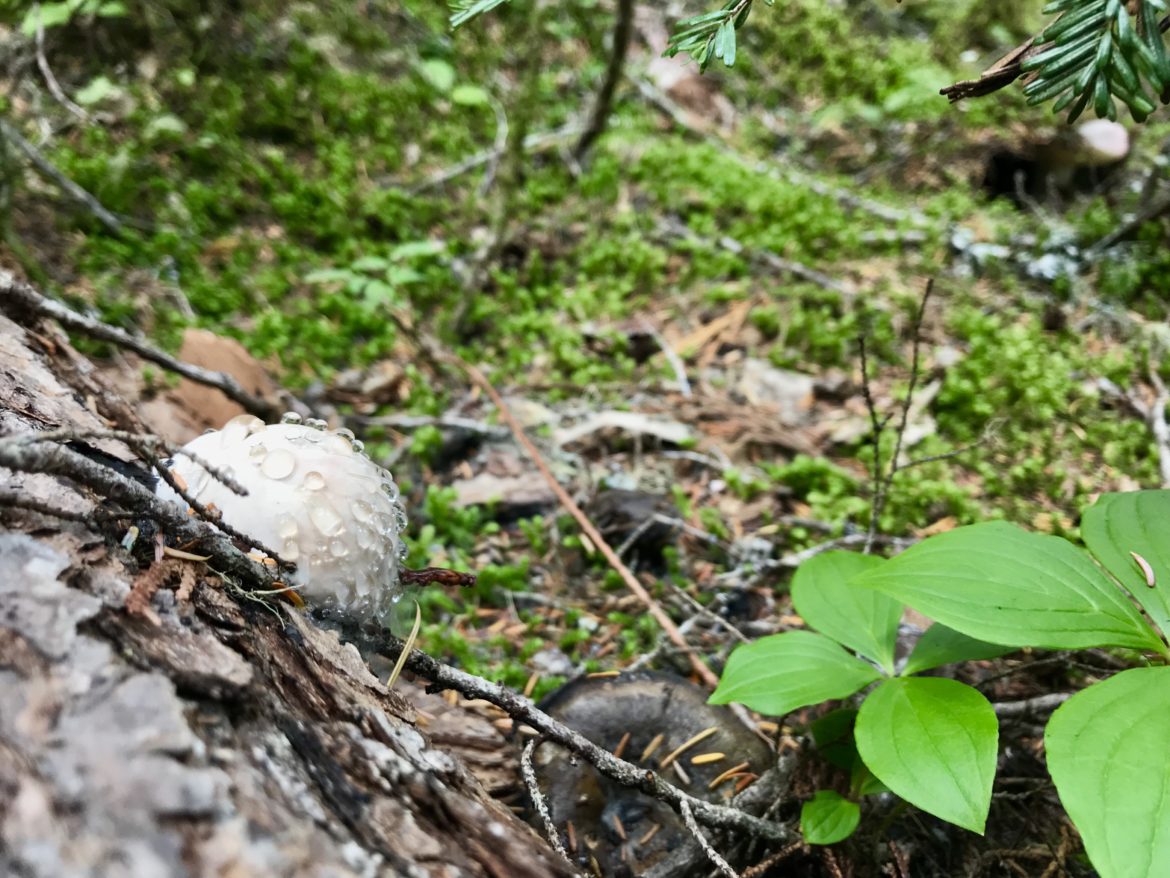 Just down the trail from the slab was a thick stream and small waterfall that pooled into a flat resting spot. It reminded me of trails closer to the ocean around Vancouver and Vancouver Island that I’d ridden the month before. They see much more moisture and the forest traps moisture in. The Microclimate trail surroundings are very different than most of Whistler’s more alpine trails and bring a mystical rainforest vibe. I stopped to listen to the stream trickle, and spotted more mushrooms. 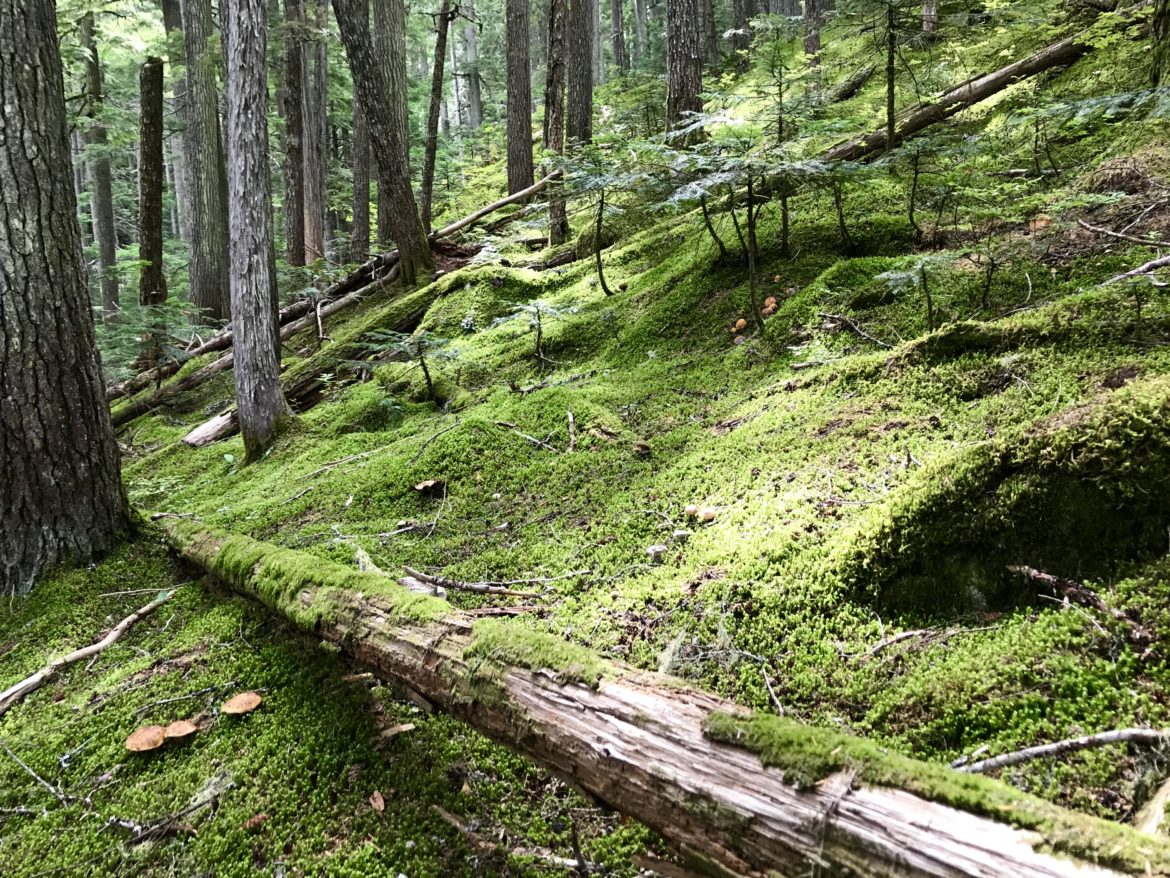 As Microclimate came to a close, there were faster, more open sections where it felt more comfortable to let off the brakes. I whooped over rollers and into a repetitive chunk that pushed back into me. Before I knew it I was back at the Blackcomb Access Road, on my way over to the main village, thinking about which trail I could try next year.