It seems that a plethora of bizarre and unorthodox events have earned a commemorative nod on the calendar in the past few years. December 7th is no exception, what with it paying homage to worthwhile historical events such as Pearl Harbor Day, or more kitschy ideas such as National Cotton Candy Day or International Aviation Day. So it happens that a little over a year ago, a cultish movement demanded tribute to a smoldering revolution in cycling: Global Fat Bike Day. 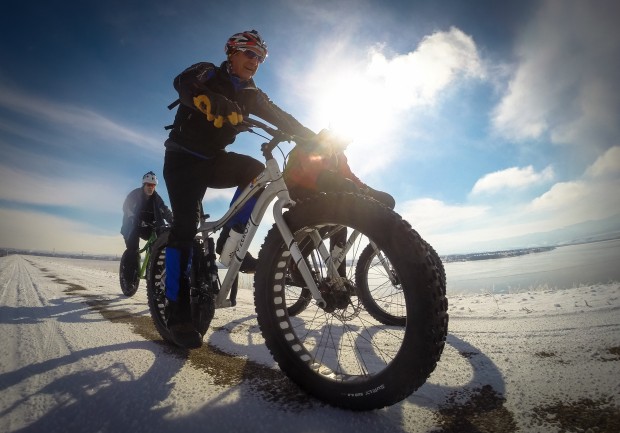 Utilizing the powers of the internet for good, a groundswell of interest developed in several domestic epicenters to capitalize on this demand in the US. Cities in Alaska, Minnesota, Colorado, and other states organized events to generate interest in the fatbike culture and industry. As a resident of Denver, I elected to participate in one of three publicized events at Pedal of Littleton, a local bike shop that has been unabashedly assuming the title role of “fat bike go-to guys” in south metro Denver.

Having developed an addiction to all things fat biking over the past year, I felt a responsibility to ignore my natural instinct to sleep in, light a fire, drink coffee, and to stay indoors and watch biking videos on the internet. Winter storm Cleon had recently nipped the West, and a blanket of snow insulated the onc- perfect singletrack that infiltrates the Denver foothills. An urban fat bike assault was the perfect place to test my new Salsa Beargrease XX1, meet new fat bike-loving friends, and suffer together on this morning that started out as minus-something and inched slowly to a balmy 6 degrees Fahrenheit. 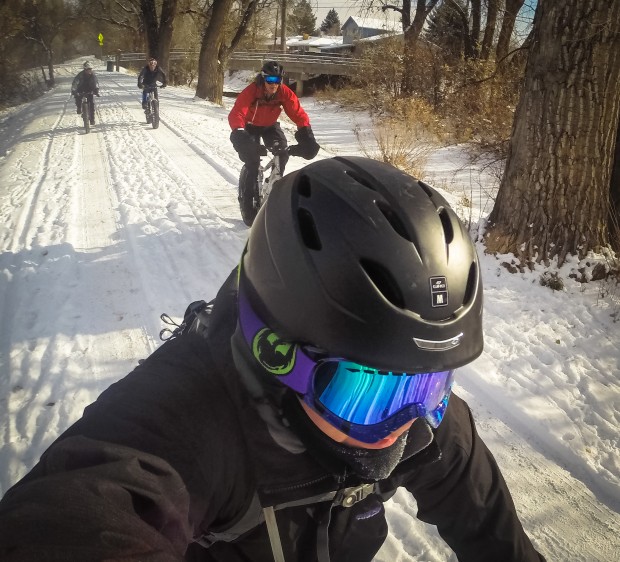 The interesting thing about riding snow-covered paved bike paths which connect seamlessly to gravel roads and singletrack: it all coalesces into one unified network of white, cold, crunchy firmament. We started from the shop with five riders on an ineptly named “warm up” ride adjacent to the South Platte River, along a bike path that shares the same name. I knew instantly that this 22.2-mile ride was going to be imminently uncomfortable when I, a seasoned fat biker, elected foolishly to ride with a thin pair of pants and socks/shoes that were built for milder climates.

Why? When riding in the snow, I typically dress like I do when I go snowboarding, complete with helmet and goggles. However, I unwisely reasoned that because cycling can generate a lot more consistent heat than thrashing down the mountain and then jumping on a chairlift, I chose to ride with one less layer. This would have been a reasonable assertion if it were not for the wind… that unforgiving, wicked, ice-water-cold breeze. Having not ridden in minus-something weather for almost a year, I was disheartened to realize a few minutes into the ride that my miscalculations might lead to frost nip–and I was correct.

Not long after my will began to wilt, a rider proclaimed that his glasses were fogging up, then freezing. He was understandably frustrated, so he aborted the ride and headed back to the shop. I considered bailing with him, but I decided I wouldn’t quit, no matter what, unless I really felt like my toes were going to fall off. So I stuck with it, to the bitterly cold end. 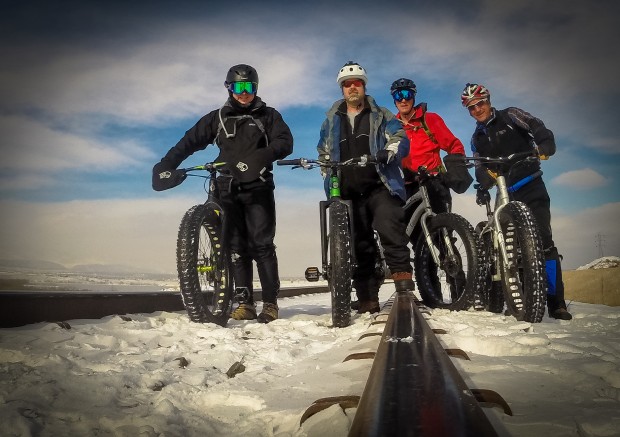 Our route took us through singletrack suburbia and towards the popular Chatfield Dam. We initially planned to ride to the beach that surrounds the Chatfield Lake and then onto the thicker parts of the early frozen lake, but our guide, the shop owner, generously admitted he didn’t want to freeze anyone out, so he cut the ride short a bit. I think we all realized we were cold or tired after about 12 miles, as no one said a word for several minutes after a rather chatty start to the ride.

As we made our way across the dam, I decided that I would stay warmer by increasing my cadence and pedaling a little harder. Things got bouncier, but my butt was so cold that I didn’t feel any discomfort. I pressed on until we crossed the dam completely and came to a service road. There, we turned a sharp corner and started downhill on this sketchy, icy road. I remember another rider, seasoned Singletracks blogger maddslacker, sarcastically mentioning how this descent was going to be “fun,” but the already activated fun part of my brain bristled at the idea of capitulating to old-man-winter. I hammered down the road until I got to the bottom, praying that my front tire wouldn’t suddenly slip sideways and lay me over at 25mph, which has happened before. 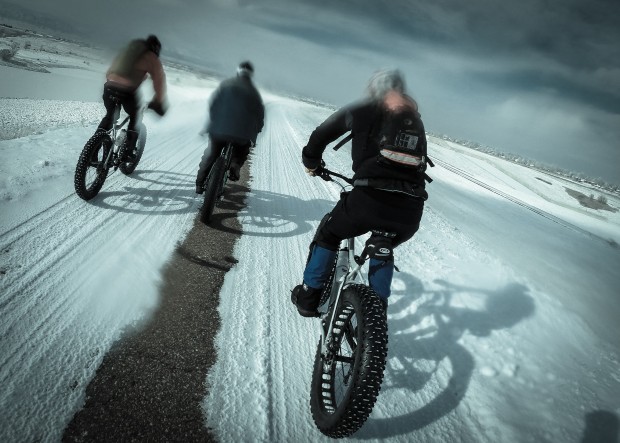 The final miles back to the shop seemed colder, but we started conversing again, so time passed quickly. This was actually my favorite moment, while talking to this misery-loves-company peloton, and inadvertently looking over to see this large coyote running and jumping along in the snow beside us for several meters. He was actually frolicking: a true Disney moment if there ever was one, and it seared an image in my mind and a notion in my soul that you never know what you might encounter on a city ride.

After a long, cold ride, we approached the bike shop again via the South Platte bike path. The home stretch was sublime: no matter how cold we were or how frozen my shoes were, we had a warm bike shop and steaming mugs of hot cocoa waiting for us with open arms!

Wait, you got hot cocoa?

No, but I hit up Starbucks after the ride then went back and bought those Wolvhammers 🙂

“The interesting thing about riding snow-covered paved bike paths which connect seamlessly to gravel roads and singletrack: it all coalesces into one unified network of white, cold, crunchy firmament.”

There was something about taking out the fatbike that really grabbed me and I just couldn’t quite put my finger on it. I felt, mentally as well as physically like I could pedal all day and now I know why. Thanks for putting my feelings into words–and great article overall!

Thanks! Glad you liked it. Let me know when you want to go for a fatibike ride and we can head somewhere close to Colorado Springs. I need to get down there for a ride this winter…Pueblo Lake trails too.

Unfortunately, there remains no room in either the budget or the garage for a fat bike at this time. (1 in college and two more coming up). I would love to find a way to swing it though–the subfreezing ride was definitely one of those great natural high moments, and it would be awesome to have the option to ride (and stay in shape) year round!

Good read! Riding fatbike makes me want to ride further and bring an invincible feeling. But it’s go-anywhere-ability really depends on snow conditions.
Let us know if figured out a way to carry enough water at such temps.

Actually I touch on this in my next article, but there are several ways to do this. You can put warm water in an insulated water bottle or in your hydration pack (I normally do the latter), tuck the hose in your jacket and blow the water back into the bladder when you are done taking a hit. This seems to work pretty good unless there are blizzard conditions, then you might as well keep your water under your jacket.

Good tips. Waiting for your next post on that

That sounds like a killer ride… In a good way. I wish I could afford a fat bike as well. Someday.

Sounds like fun. It hasn’t been THAT cold in NC yet if ever. High of 75 today. A fat bike would be so fun but not really necessary here according to my wife too haha