SRAM has just announced their brand-new drivetrain groupset, dubbed “GX.” GX is available in 3 different configurations: 2×11 (previously only available in Shimano XTR), 1×11, and 2×10, depending on your preference. However, interestingly enough, SRAM isn’t rolling out this new drivetrain at the top-end of their lineup as is normal with… well, pretty much every mountain bike company.

Instead, the pricing of these new groupsets comes in below the price of SRAM’s relatively-affordable X1 drivetrain, and above the price of an X5 drivetrain. If you want to think about this as a revamp and rebrand of X9 and X7, you’ll get the picture. Since there are three different component options, component prices vary widely… but to give you an idea, the 2×11 GX rear derailleur will retail for $126, the 1×11 rear will retail for $115, and the 2×10 rear will retail for a scant $68. Compare to the $326 MSRP for an XX1 rear derailleur.

If you want to buy a full-blown groupset, here’s the pricing for the entire package deal. Compare the price of these entire groupsets to the $488 MSRP for an XX1 crankset:

If you’re interested in the exact MSRP break down for every single component that’s included in this new release, well here you go: 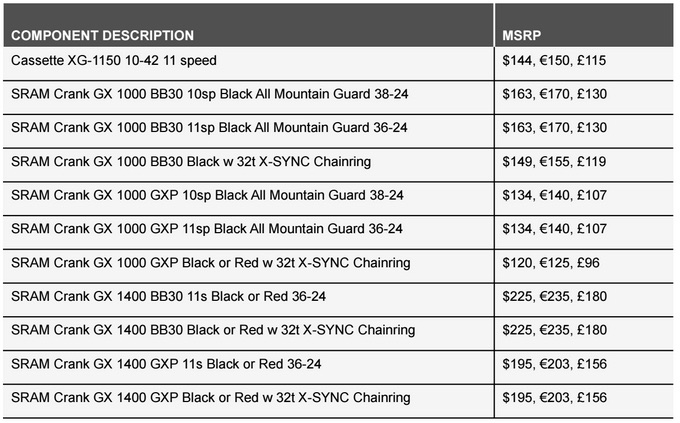 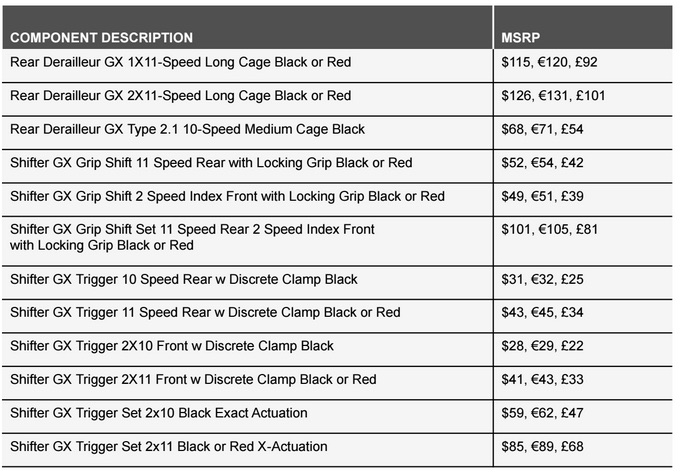 Since this new GX drivetrain roll out is essentially the introduction of three different drivetrains, there are a ton of components and changes to talk about. I’m going to attempt to boil the information down into a few useable nuggets for you.

The biggest change is a 2×11 drivetrain option. Previously only available in Shimano’s top-end XTR drivetrain that’s pretty much guaranteed to bankrupt anyone who so much as looks at it, 2×11 is now instantly (at least, once you can source it) available to the masses. This is a pretty interesting strategy on SRAM’s part, but since I hate the idea of spending a couple thousand dollars on a new drivetrain, I highly approve of the pricing structure above.

We’ve discussed 2×10 and 1×11 before, so as you can imagine 2×11 is a mating of those two options. As you can also imagine, 2×11 has a much wider gear range and set of ratios than 1×11. In their press release, SRAM included numerous charts showing the improved gear ranges that SRAM offers over Shimano. I find it interesting that everyone is touting their gear ranges this year when a couple of years ago with the roll out of 1×11, SRAM was saying, “oh, you don’t need that wide of a gear range… this is close enough.” So take it or leave it, but at least now you have options to choose from.

I’ve already covered the pricing ad nauseam, but it bears discussion in relation to the technology. For the past several years the masses have been crying out that the prices coming along with all of the changes have been too expensive, too much too fast, etc. etc. And I’ve been waiting–waiting for the tech to trickle down into a more affordable offering. GX is that more affordable offering.

GX offers basically all the major 1×11 technology that we’ve talked about in recent years in the high-end XX1 and X01 groupsets in a more affordable (but heavier) package. And interestingly enough, these new GX drivetrains are also available in Boost 148 varieties. Instead of waiting another 2-3 years for Boost 148 to trickle down to GX, SRAM is offering it right off the bat in the lower price points. Bold move.

Grip shift technology apparently isn’t going away anytime soon, as SRAM has trickled it down to a much more affordable price point, too. Previous grip shift prices were pretty astronomical, so some people will be stoked to see grip shift available at the prices listed above.

While SRAM already had several 2×10 groups available, I think the big takeaway from the GX roll out is that 2×10 isn’t going away anytime soon. Due to this 2×10 makeover, support for this drivetrain option should continue for years. Right now, the GX 2×10 looks like the drivetrain option from SRAM for those who want the latest tech, dependable shifting, ongoing support, and low price.

Unfortunately, the one thing we didn’t see in the GX release is a stock 10spd rear cassette that goes up to a 42-tooth cog. Shimano recently rolled out such a cassette, but if you want a 42-tooth cog on your SRAM drivetrain, you’ll either need to go 1×11, 2×11, or continue with your after market upgrades. But if getting that 42-tooth is super important to you, and you’re already looking at the GX 2×10 as a new drivetrain, it makes way more sense, and will cost less and perform better, to drop $55 and go to GX 1×11 as compared to purchasing a GX 2×10 and then doing an aftermarket modification right away to add that 42-tooth cog.

Undoubtedly there’s even more nuance that we could discuss with this new product release, so if you’re interested, click here for the full press release. Have any other thoughts or questions on what SRAM GX means for you? Leave us a comment below, and we’ll try to help hash it out.

I’ve been riding cross on a SRAM Red 2 x 11 groupset, but dropping the chain continues to be a concern. I have considered changing to the new force CX-1, but I still like the range available for cross on a 2 x 11 set-up. The GX group is their only 2 x 11 rear derailleur with a clutch set-up. I know that the cable pull on SRAM groups is no longer the same on mountain and road shifter/derailleurs, but how about the GX group? would the GX 2 x 11 clutch rear derailleur be compatible with my SRAM Red Hydraulic brake 11 speed shifters?