In an effort to take advantage of a long weekend vacation consisting of both bike and non-bike-related activities, the family and I decided to take in a few sights in Northern New Mexico. With a distinct flavor compared to the rest of New Mexico, Taos provided an escape from everyday life.

The Rio Grande Gorge, and surrounding 240,000 acres, recently received the distinction of becoming a national monument. With an elevation difference of over 800 feet from the mesa to the Rio Grande, this geological formation provides breathtaking views.

Since the 18th century, artists of all genres have flocked to Taos, NM. Art runs deep in the veins of Taos, providing a rich and unique experience for visitors at every turn.

Though not nearly as eclectic as Taos, Angel Fire boasts a natural beauty common in the mountains of Northern New Mexico.

The Race – Day One: Backcountry

With significant rain the day prior and potential pending thunderstorms forcasted for the afternoon, over 70 enduro racers eagerly awaited the start of the Angel Fire Double Down. Day 1 covered almost 17 miles of single and doubletrack with over 6,000 feet of elevation change, maxing out at an elevation of over 10,000 feet.

The climb to Stage 1 was a long, strenuous climb on doubletrack and dirt roads over 6 miles, gaining approximately 2,000 feet. The downhill, however, provided fast, tight singletrack deep in the woods, with enough rock and roots to keep all riders at the edge of their saddles. 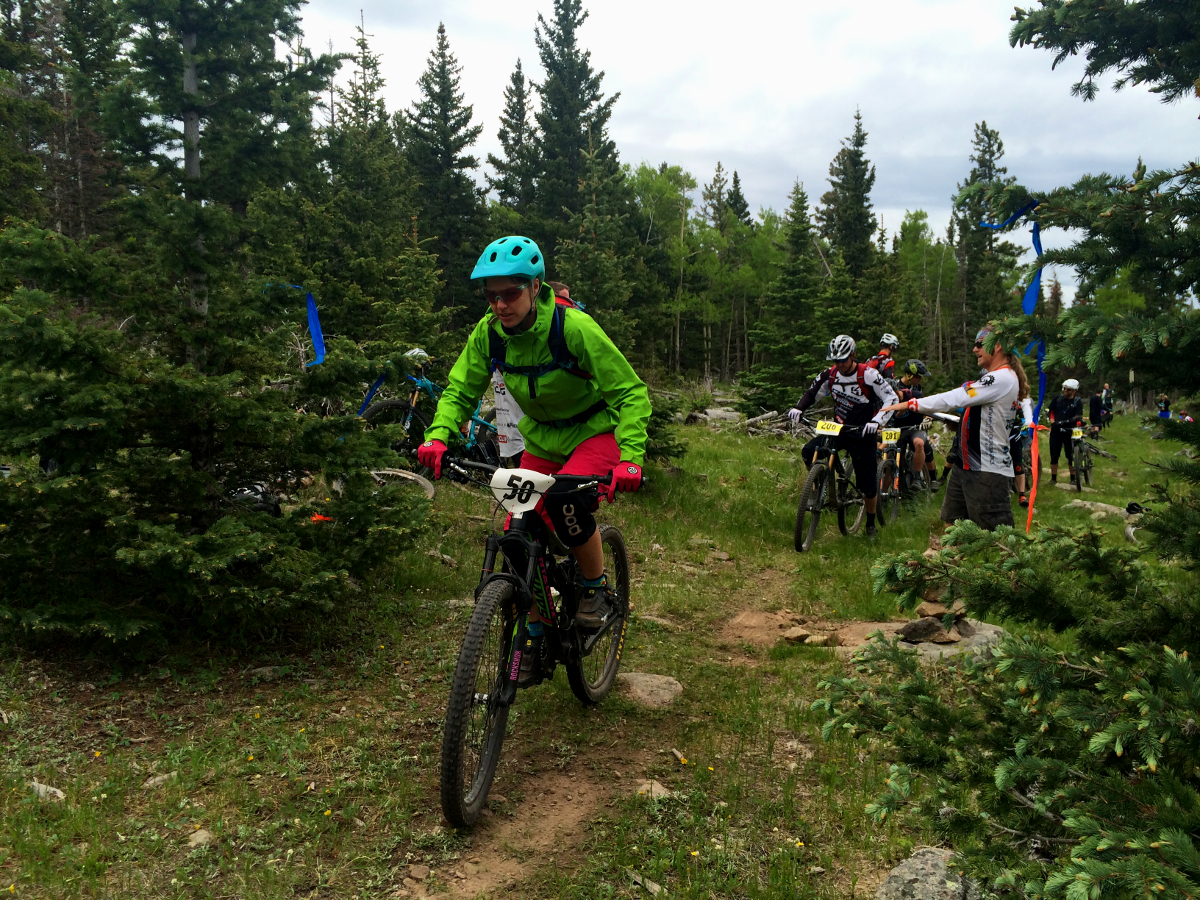 Though the routes were designed in order to maximize downhill sections during the timed stages, even the liasons between stages provided entertainment. With a chance to ease off the pedals, the true beauty of the race course could be enjoyed in the journey between stages.

Stage 2 on day 1 consisted mostly of extraordinarily fast and muddy doubletrack, with the top riders averaging almost 30 mph during this stage. Though numerous mud bogs caused many riders to brake check occasionally, it provided a chance for racers to bring out their inner child once again.

With Day 1 wrapping up shortly before noon, racers were able to take shelter before the afternoon downpour hit the small town of Angel Fire. While the rain prevented a good portion to fully pre-ride the bike park, it provided almost optimum conditions for the race course on day 2. Though a few muddy sections existed in the early hours, hero dirt covered almost all 4 stages.

Stage 1 and 2 were the most technically challenging stages of the entire weekend. Stage 1 traversed Upper Chillin’ and Fo’ Sho’ before dropping into the calmer trails of Pinball and Lower Supreme. Stage 2 provided the unique opportunity to race the course almost identical to this year’s Pro GRT on the World Cup trail. With features best suited for a downhill bike, these courses provided racers the chance to showcase their best skills. Stages 3 and 4 were comprised of mostly intermediate trails–a bit of a relief for the more inexperienced racers on the second day of racing.

Holding true to the mountain bike and enduro spirit, the pros autographed memorabilia for the winners of the youth categories.

Kelli Emmett from Juliana was able to pull ahead quite a bit on the first day of racing in order to maintain a first place finish for the weekend. Though Krysta Park from NoTubes Enduro Race Team finished first on the bike park stages of day 2, it wasn’t enough of a lead to overtake Emmett for first place. Leigh Bowe from ColoRowdies took home third.