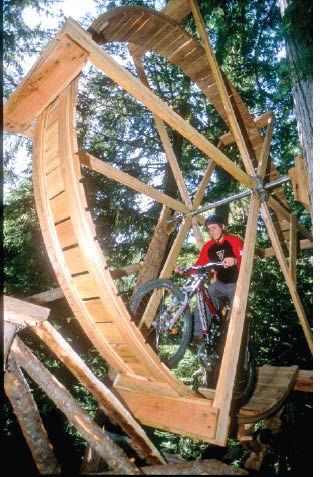 Mountain biker Sam Brown, who was featured in the New World Disorder 3 film, died in a Spokane, WA jail two weeks ago after being arrested for piloting a helicopter filled with 150 kilos of marijuana across the US/Canadian border. At this point the cause of death is still inconclusive and our prayers go out to Sam’s friends and family during this emotional time.

Sam inspired a ton of mountain bikers and the article I read points to tribute forum threads on some of the Canadian mountain bike websites as evidence of the positive impact he had on so many riders. Sam’s biggest claim to fame is envisioning and riding the “Deconstructed Wheel” pictured above – a hamster-wheel looking contraption that featured prominently in New World Disorder 3.

Brown had been working toward his helicopter pilot’s license but had not yet received his official papers. The helicopter he was flying was reported stolen and supporters say Sam was simply tied up with the wrong people at the wrong time. Whatever the case, the mountain biking world lost an innovative and fearless rider – we’ll miss you Sam.

The wheel looks pretty intense must of been a pioneer but looks like he collapsed.

Risk vs reward..a metric we play out everyday. Sorry to be informed of his demise, but we can’t glorify his achievements in light of his final undoing. All of the “extreme” sports have their tales of fallen heroes at the hands of bad influences..some live to tell the tale..Matt Archbold and Flea Virostko, others don’t as they die in the sport…Peter Davi drowning at Ghost Tree on meth or Marco Pantani..a true great. Brown went down at his own hands and it seems the biggest drop off was his final. I think the ramifications for him outside of jail were greater than what the justice system had in store.
Hopefully his closest friends and family, set up a foundation to steer others away from this path.
On another note..if we legalize marijuana, no need to take these risks!!

@Suvacrew, I agree, though it’s tough to pass judgement since he was in jail awaiting trial on the charges – in the US everyone is innocent until proven guilty. Either way it’s definitely a cautionary tale…

I don’t know the details about how he ended up in the situation that he did but he made his own decisions. Unfortunately it puts a bad light on the MTB society as rebels/renegades and associates drug useage and the like. Which is a shame because thr roadbikes get to be associated with health and fitness (even when the racers are getting caught “doping” with enhancing drugs). Legalizing marijuana is not the answer; its a cop-out. People need to spend their time doing constructive things and be strong enough to say “I know this bad for me, I know it’s illegal, and I’m not going to do it.” Its a shme that a pioneer in the sport has died and I do hope that lessons are learned and people steer away from that path…..

“Legalizing marijuana is not the answer; its a cop-out”.

I disagree, its the criminalization of marijuana that has created the black market. Yes, the guy made a bad decision but there was a giant carrot sitting out. Its not marijuana that this guy was after nor its use, it was the high profitability from an illicit drug. Government regulation (ie ABC Stores to alcohol), not the black market will control usage and eliminate the profits of the black market and increase government revenue. The U.S. is trying to address a supply issue…. all that does is make the prices rise and intice more people to take the risk for the big payoff. They need to address demand side and criminalization won’t solve it since its impossible to enforce what people do in the privacy of their own homes.

An adult is more than capable

If you curb the profit of this illegal trade then the criminals will move on to another drug to push which will increase its availability. It cannot be solved this way. The only way I see to curb the drug trade is by force and I means real force. We cannot worry if someone is worried about these sluggs rights. In my oppion they have no rights and should be elliminated quickly and without remorse.

[…] life as a drug smuggler and ended up committing suicide in a Spokane jail back in March (we also wrote about this on the blog). Priestley recently bought an “option” on the article which basically […]

I know this was published ten years ago but I just wanted to say thank You. I am Sam’s niece he died when I was four and I’ve always wanted to know what happened to him but my family would never tell me. So thank you for helping me