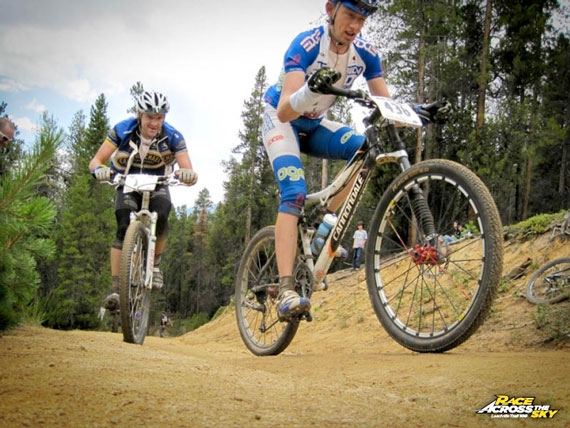 photo courtesy Race Across the Sky.

Leadville 100 Trail race organizers work hard to protect the integrity of their unique and challenging mountain bike race each year so the latest news shouldn’t be too surprising. According to Sky Hi Daily News, 36-year-old Wendy Lyall competed in the 2009 race using 40-year-old Katie Brazelton’s official race number and ended up “winning” second in the 40 to 49 year-old women’s division. Now both women face a class 6 felony for criminal impersonation.

Brazelton wasn’t able to compete in the race so rather than lose her $250 entry fee (numbers are not refundable or transferable), she offered the number to Lyall. Race organizers received an anonymous tip recently which led to the investigation and since then the women have returned the belt buckle and second place prizes.

Of course these women probably aren’t the only ones who raced Leadville last year using a borrowed race number. Race directors argue this is a safety issue (emergency contact and medical info may be associated with race ids) and clearly it can also affect race results. In any event, this case will certainly make others think twice about transferring race numbers in the future, especially as race numbers become more difficult to obtain (think scalpers).

Criminal charges seem a little excessive. She shouldn’t have accepted any awards/prizes however. Not really sure what the best way to handle it is.

Ouch! Why not try to transfer to another division before the race or like dgaddis said come clean and don’t accept the award.

Who thinks the tipster was the racer in 3rd wanting 2nd or 4th wanting 3rd??
Criminal…that’s a stretch. Ban them from this race or from racing all together for a few years. Gee even Floyd and Hamilton were sin binned for only 2yrs.
Time for race directors to be a more diligent as they are at Ironmans and other Triathlons.

Lack of integrity and honor. Criminal seems excessive. Punishment should be making them sweep the entire trail for GU packets and other nutrition garbage left behind. Entire 100 mile trail, in 24 hours on foot.

Lack of integrity, responsibility, and honor yes, but as previously mentioned…..criminal is a bit excessive I believe. I truly feel they should be banned from any racing, but to fall under criminal charges. Mmmm??? The sad part about these races, there will always be cheaters no matter how diligent the officials get with races such as these, or how strict they may be toward the riders involved in the races. This is just fact of life when it involves human beings, and that is truly sad.

they should ban them for life plus 25 years