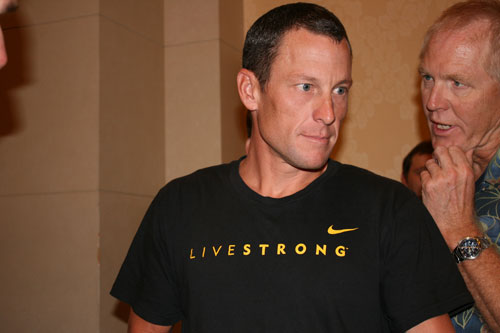 Lance Armstrong got his revenge at the Leadville Trail 100 today and set a new course record for the mountain bike race, finishing in a time of 6:28:50 (almost 20 minutes faster than last year). He rolled into the finish line with a flat tire and went right to his trailer without stopping to talk to the press so it’s hard to know how he felt at the end. Word is that he rode on that flat tire for the last 15 miles of the race! Whatsamatter Lance, you don’t know how to fix a flat mountain bike tire yourself? 🙂

Six-time winner and local favorite Dave Weins took second and finished the race about 20-30 minutes behind Lance. As he crossed the finish line the woman on the live webcast asked him “What slowed you down this year?” right off the bat and Weins looked a little insulted at the question (can you blame him?). He basically said he thought he did a pretty good job and that he gave it his all against the 7-time Tour de France champion.

Tinker Juarez had a mechanical issue early in the race (a broken seatpost clamp?) that forced him to exit the course.

Judging by the crowds in the webcast it looks like this was the largest turnout for the Leadville Trail 100 to date. According to race organizers more than 1,000 riders representing 47 states and 8 countries toed the start line this morning. After watching the webcast I think I need to start training for next year’s race right now 🙂

I couldn’t get the webcast to work, but following it (and Singletracks) on Twitter was kind of fun!

I’m thinking about getting the DVD. Do you think its worth the 20 bucks?

It’ll probably show up on youtube if you’re patient.

If the DVD is based on the live coverage then, no it’s not worth it. The live coverage was mostly just two people standing at the finish line talking about the race. I saw Lance for about 15 seconds after watching for a couple hours.

You can watch the coverage online for the next 90 days if you purchased the $5.95 live feed. If I get some time I may go back and see if I missed anything. At least I’ll be able to fast forward the boring parts 🙂

What Wiens should have said: “WTF kind of questions is that?” and then proceeded to wrestle the mic from her hands and stomped it into the ground. It sounds as if the coverage was pretty sophomoric.
Lance kicking it for 10miles with a flat….impressive, maybe he could have shaved another 10-15 minutes off if he had some sealant prepped tubes….probably running USTs huh?
Impressive results for all.

Here’s a couple that are supposed to be better:
http://www.superhumanmag.com/content/view/1565/48/

Lance Armstrong . . . Impressive cyclist, questionable as a human being.

I admire his ability as a cyclist. In that he is still hard to beat. But as human being, I still have not forgotten how he divorced his wife, the woman who stood by his side during his bout with testicular cancer, for Sheryl Crow, then threw Sheryl Crow away when she announced her cancer.

His foundation has done wonderful things, there is no doubt about that, but I have a hard time separating his personal actions from his athletic achievements.

Hey Pgh, you forgot to mention the Olsen twin 🙂