As a kid, summer camp for me was about getting lost and dirty and learning how to bail mirky pond water from a capsized canoe. As a much older kid, vestiges of summer camp live on through events like the four-day Trans Varaita Enduro (TVE) race. The fun, the fear, the camaraderie, and the food are all there to create a space for racers to learn about themselves and each other in tandem.

The race takes place on the flanks of Monte Viso, arguably the most iconic peak on the Italian/French border. The high western Italian forests are populated by oak, pine, and beech trees, and loads of adorable woodland animals, including furry pitch-whistling marmots, all above a stone-strewn floor that seems to be perfectly designed for a lively mountain bike event.

Basecamp for the inaugural TVE was set around the quaint alpine hamlet of Sampeyre, Italy, just a short drive from the site of the world’s first MTB enduro race in Val D’Allos, France. Sampeyre is encapsulated by epic singletrack loops on all sides, and all trails eventually end at the crisp waters of the Varaita river. The village locals seemed equal parts surprised to see all of us armor-clad cyclists pedaling through their streets, and pleased to show off their local Piemontese flavors.

The race promoters of the TVE are huge fans of Slovenia’s Trans Julius Enduro, and set up their four-day program in a decidedly similar fashion. Day one started off with a race meeting, followed by an easy pedal to the top of stage one. The first trail was a good primer for the week, with a fast and flowy mix of singletrack and doubletrack to allow riders to shake out some nerves. On-sight racing requires heaps of concentration and presence from racers, and the TVE promoters did well to ease us into the experience.

After everyone had completed stage one it was time for a snack and a nap. The second stage of the day would begin at twilight, where athletes would navigate the same trail by headlamp light. The relaxed nature of the TVE schedule was intentional and welcome, as it provided ample time for stretching and socializing. A good number of folks were riding the race on the “just for fun” line, and the über-chill atmosphere of the event was perfect for their enduro vacations. 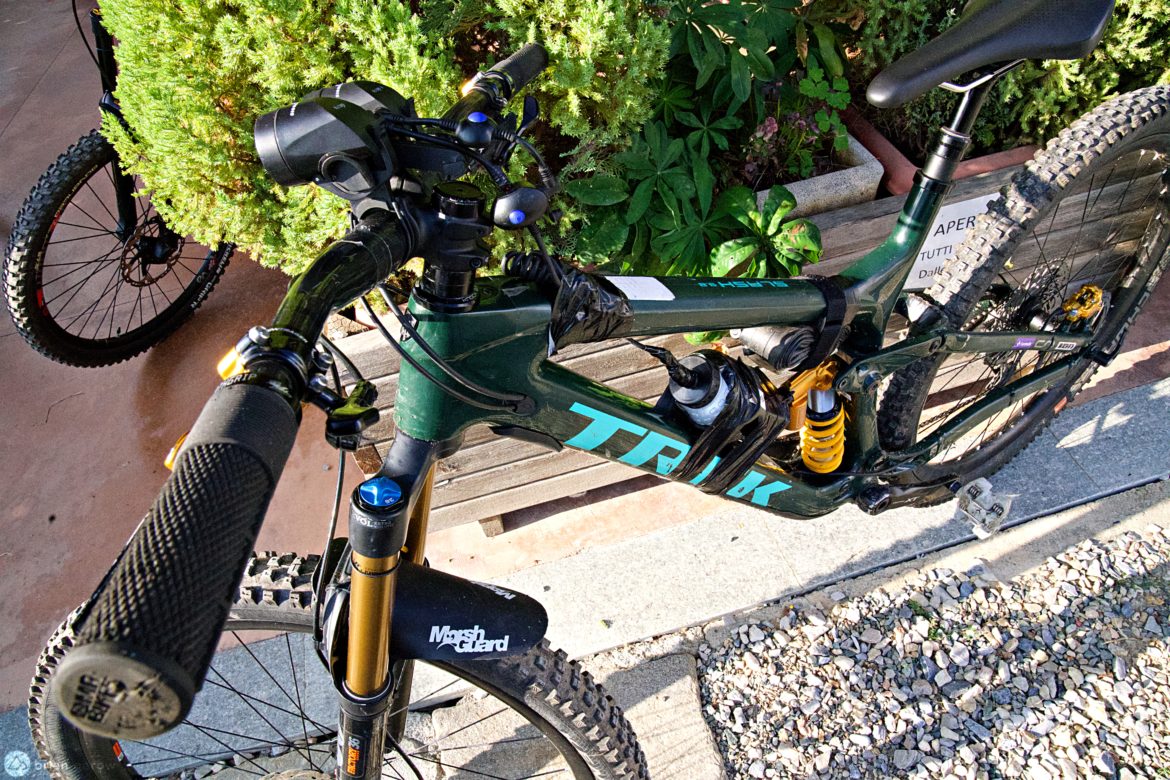 With lights strapped and lashed to handlebars and helmets, we pedaled the ascent to stage two with a warming air of camaraderie. Each rider now had a number plate based on their stage one results, and for those of us who were truly racing, we now had something to defend. A small amount of evening dew dampened the stones on track, and there were a few spirited dirtnaps in the dark. 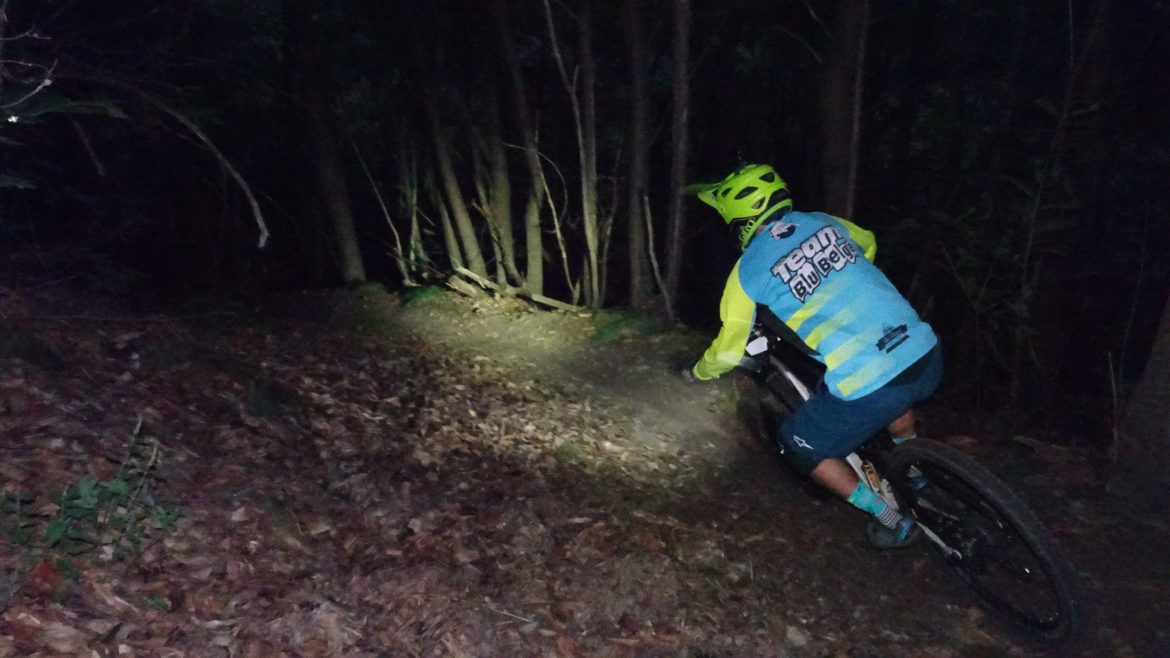 I started my run overly confident in my night riding prowess, and that chutzpah would bite me sharply about a third of the way down track. I felt good through the first few turns, if a little too loose, and was fighting to reposition my hastily strapped helmet lamp. I entered a left turn on a piece of seemingly benign bench-cut singletrack and the next thing I knew, my bike and I were mid-air careening cliffside toward a pile of fallen trees downslope. This was the sort of crash I had always feared, but never believed I would experience firsthand.

After being abruptly added to the log pile, I jumped to my feet simply to make sure I still could. With what felt like a world of good fortune I was largely unscathed and began the long scramble with my bike back to the trail. I have a lot of padding and helmet engineers to thank for my ability to survive this spooky stackup.

Back at the race paddock, everyone swapped stories of their night ride and plans for the following day. Dinner was served, and beers were clanked as we all moved closer to being friends first, and competitors second — or third.

Day two looked a bit more like a classic enduro event. With two long stages starting early in the morning, I assumed we would be done in time for lunch. What I hadn’t realized, nor had I paid attention to, was that we would climb for several thousand feet to reach the start gates of both trails, and there would be a good amount of portage (hiking) mixed into the upper ascents. Both of the day’s tracks were fun and flowy, with intermittent steep segments and endless beautiful views. Race times on the two stages ranged between 6-9 minutes on either track for the fast kids, and climb times were closer to 1.5-2 hours for everyone. At the end of the second stage, tired and famished, the throng of athletes retired to basecamp for a beer and pasta party.

The program for day three of the TVE had an ominous appearance, with only one massive stage, and nearly the same measure of meters to climb as the two stages prior. The climb kicked off a mere stone’s throw from the French border at Refugio Melezè. After about an hour of steamy pedaling in protective gravity gear, we reached the snack point, and the base of a burly portage. With our downtubes on our necks, bikes inverted, we marched like fabled ants up the hillside toward a windblown grassy saddle, then descended for about two minutes to the base of the second hike that would drop us at the start of the day’s stage.

Soaked in sweat, most of us hoped to start racing as quickly as possible, but first we had to learn the fine details of the lengthy shred ahead. Unlike the days prior, this stage would look more like a treat of adventure and exploration. For the first half there was no trail to follow, but a series of ski-style gates that we had to pass through on our way down the exposed slope. The gates were spaced fairly far apart, occasionally over a knoll from one another, and volunteers flagged the direction to the next checkpoint. This freeride style proved to be a super enjoyable experience, and the trail that we eventually dipped into was a gas as well. Following the short and technical piece of natural trail riding, the stage dumped onto a length of high-speed gravel fire road where racers made a hard sprint to the finish.

You would never guess it, but this stage was also followed by beer and rest time before everyone sauntered back to hotels and campers for the remainder of the afternoon. Despite the long hike-a-bike, this stage left me wanting to ride more, but I retired to my van to nap and wrench on my bike instead. The final day of racing held the largest amount of sustained climbing yet, and rest was certainly the best use of my afternoon. 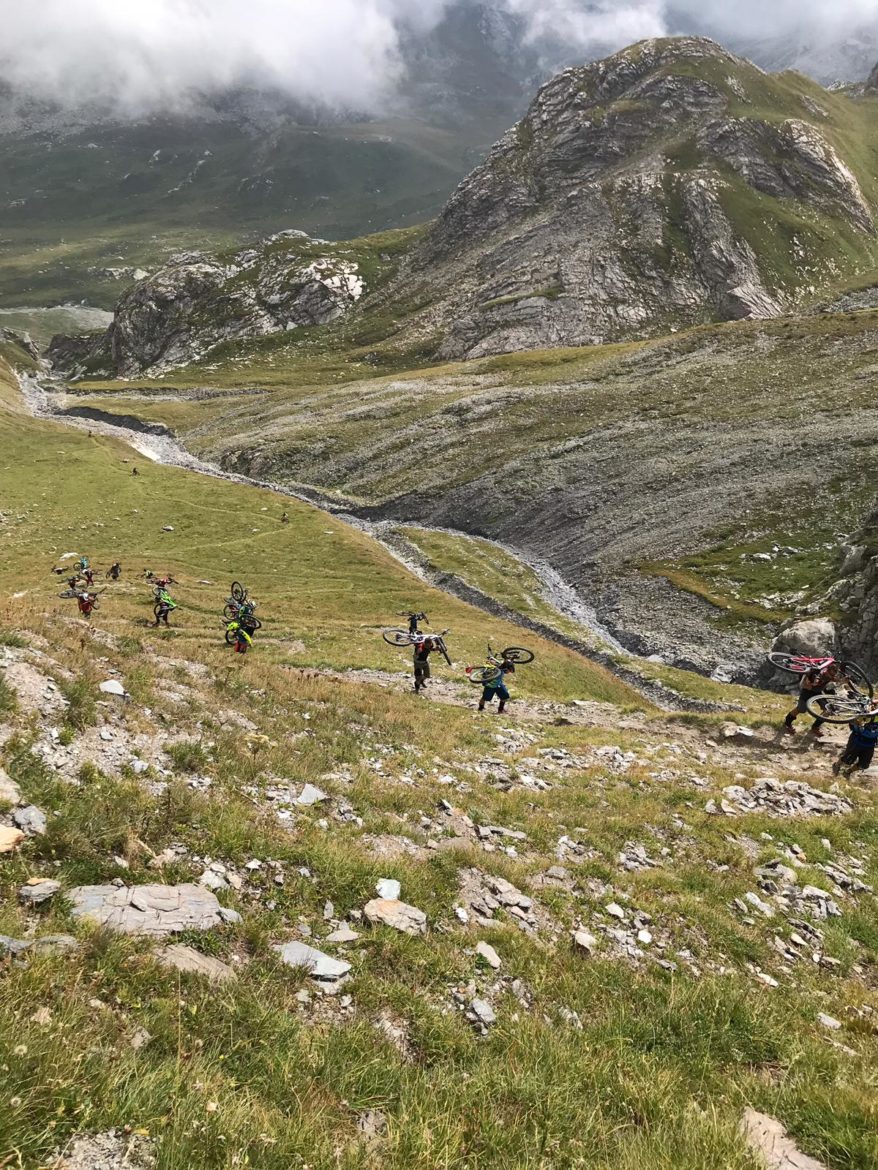 Day four promised a pair of proper queen’s stage descents, with rockier and steeper tracks than we had seen all week. Though many of us were nursing small physical injuries and soiled egos, we entered the first stage of the day with nearly as many racers as were present on day one. The climb to the first trailhead was almost entirely hiked, with expansive views of the Varaita Valley wherever the towering pine trees would allow. 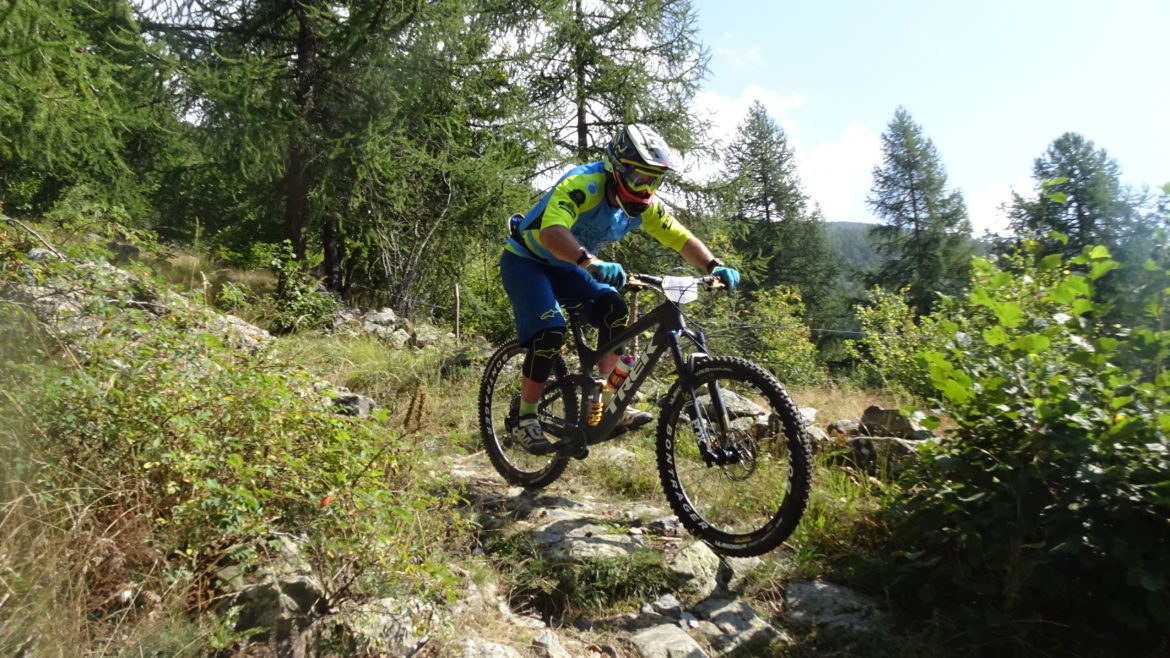 Once everyone was lined up at the start gate, the race officials gave a fair warning speech about the slippery and technical rocks paving the beginning of the trail. Most of us followed this information by walking the first 100 meters of track to get an idea of what that might mean. From alongside the trail, everything looked normal, and there was no visible water on the stones’ surfaces. Perched atop the bike that view changed drastically. Nearly every one of us had a tale of hitting the deck on that initial slick section, myself included, and the trail took at least one rider out of the race completely. I sincerely enjoyed the bike-dance effect of the soapy stones and found myself laughing during the stage whenever I wasn’t gasping with grateful fear from another near miss.

The penultimate stage had swapped up the competition a bit after the race leader suffered a broken wrist, and gave everyone something to bond over during the following 2hr+ climb. Most of us had a good time, even if we were missing some elbow and shin skin. The pedal to the final stage of the 2019 Trans Varaita Enduro was open and awe-inducing. The gravel road switched back in shaded pine forests and eventually rose through an alpine meadow with an ever-elusive peak.

Following a short stretch and snack in the sun, it was time to depart in numbered order of our first day’s results — though few of us held those same positions. This final track was well-selected, with nearly every element of a trail that modern enduro bikes are designed for. The tread was cat-litter loose, steep, and sporadically opened up with multiple line choices across off-camber washouts. I was the eighth rider to leave the summit, and I happily watched as every single competitor who crossed the ultimate finish line hollered with joy for the beautifully curated trail, and for the overall Trans Varaita experience.

In summation, I truly love the multi-day, on-sight racing format, and I will undoubtedly be signing up for this and similar events in the future. The team at Trans Varaita Enduro did a wonderful job designing their first event, and they are already planning next season’s shred with new trails and locations in the valley.

Stay tuned for 2020 TVE registration info in the coming months. This is a trail party you won’t want to miss. 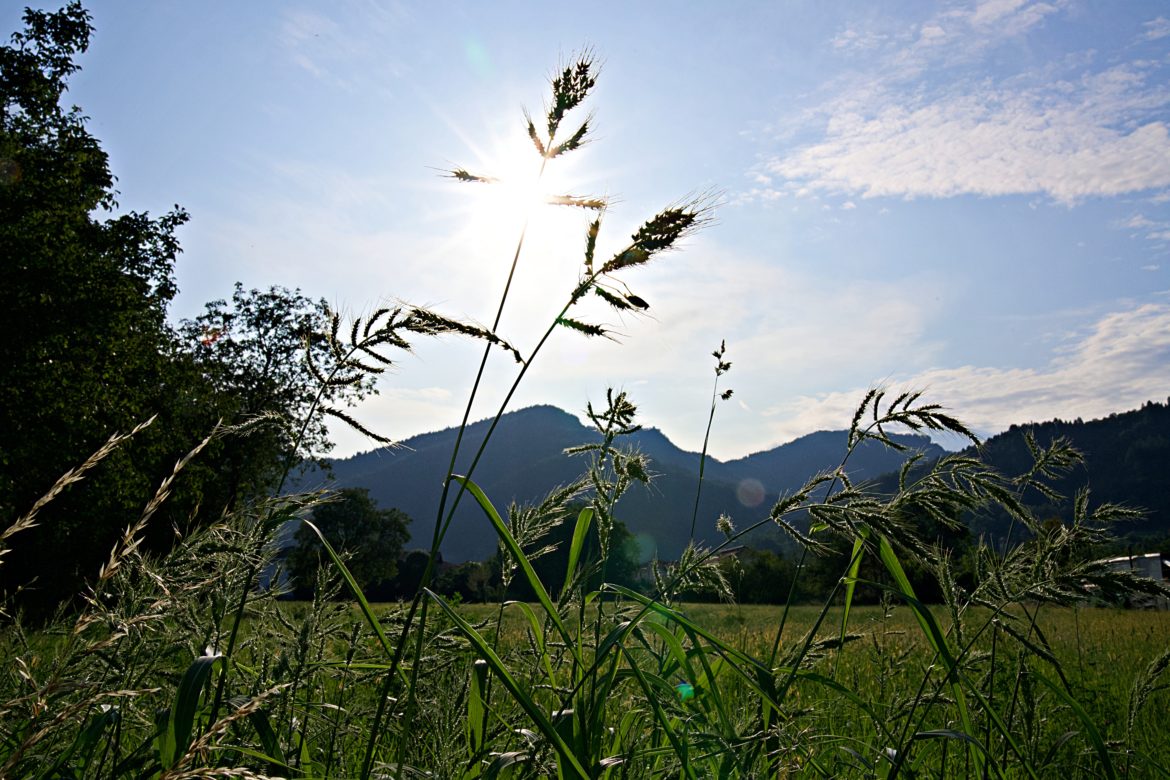 Hey Brian, I asked you a while back why you race. This write-up explains it pretty well! Seems epic, maybe I’ll sign up for next year 🙂