When E*thirteen announced the updated TRS tire in early January, it was the first time I had ever heard that the well-known wheelset, chainring, and drivetrain conversion brand also offered tires. Being the tire nerd that I am, I immediately dove into researching what these slabs of rubber were about.

Following my research, I had only one question: why would they redesign the tire? The reviews I read pointed to the fact that it was one of the best all-rounders on the market. It made no sense to fix something that wasn’t broken. In the end, all I had to do was spend some time riding the tire to find out. 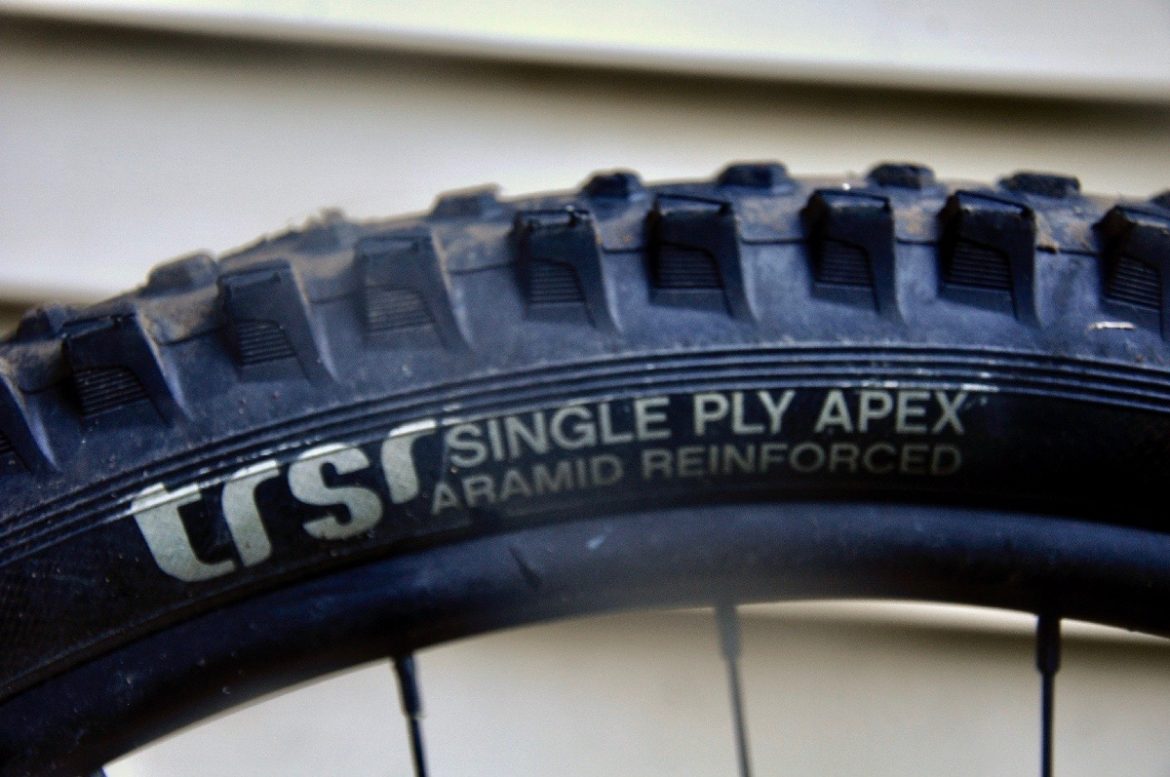 To start, the TRS tires are available in both 27.5” and 29” diameters sporting a publicized and actual width of 2.35”. It’s interesting to see E*thirteen standing by a single width that’s on the more narrow end of today’s standard, but throughout testing I never felt as if I was being held back by the width.

Both the Plus, a tire targeted for day-to-day riding, and weirdly it’s more competitive sibling, the Race model (tested), feature a single-ply casing. However, that doesn’t mean the sidewalls are a joke. 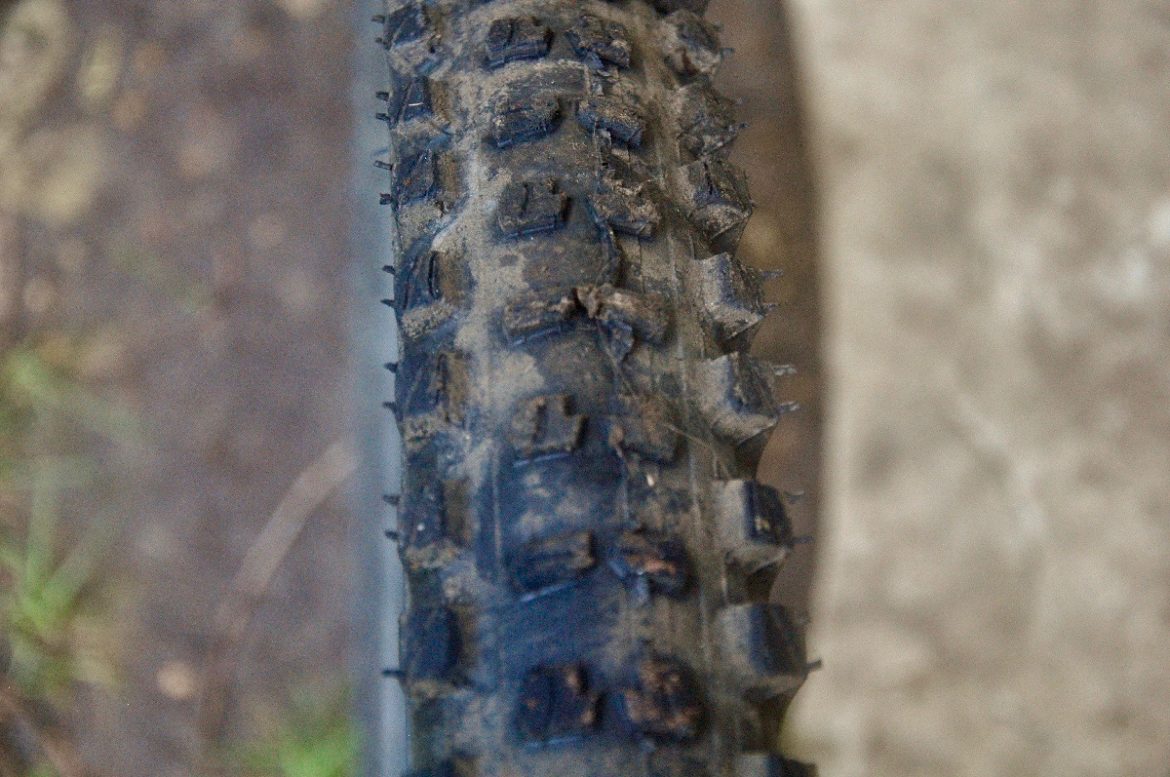 The salivating doesn’t even stop there. Although the tread pattern largely remains the same as before, nobody’s complaining. Thick, aggressive side knobs keep the tire solid in turns and off-camber sections while shorter center knobs keep rolling resistance to a minimum and preserve the tire’s integrity on hardpack surfaces.

If you treat yourself to the Race model, a layer of high-tack rubber on the side knobs leaves riders with an even bigger margin of error on twisty trails. In addition, the inclusion of slow-rebound rubber on both tires makes things as grippy and smooth as possible.

All those features come with a pretty low weight and price, too. At 995 and 1094 grams for the 27.5” and 29er Race versions respectively, the TRS lies at the lower end of a pack of similar, super tacky racing enduro tires. Similarly, the tire is a surprisingly affordable $69.99, unlike offerings from other brands that can easily push toward $100.

Tubeless installation went very smoothly. Although getting the tire on the rim the first time required a little muscle, it blew right up with little effort from the track pump. Getting the tire off was harder because it’s designed to stay on the rim no matter what. However, after the first removal, the tire became much more agreeable.

Getting out on the trail

On the trail, the single biggest factor that converted me to an E*thirteen fan was the sheer amount of grip. Over the course of the last two months, I had the chance to push the Race model to its limits from the bone-dry trails of an unusually sunny Wisconsin, to the pouring rain of Alberta’s Jasper National Park. There was not a single place I couldn’t get more-than-enough grip.

There was so much grip on tap that, like other testers from around the internet, I found myself taking stupid lines to try to reach the tire’s limits. For example, my local trail system is a web of trails that feature some insanely steep lines. Until I mounted this tire, I hadn’t even noticed them. With the tire, I was bombing those obstacle-filled runs with no problem at all. Likewise, the weird, sharp, off-camber turn that I had dreaded (and crashed on) for years didn’t even make me flinch. I just let that high-tack rubber do all the work as I moved on to the next feature.

Wash-outs on slippery roots also became a thing of the past. I could actually ride almost every single root under one and a half inches at any angle. Anything bigger was just as easy as long as I hit the root in a reasonable way. While turning, the rate-limiting-step is only how far you’ll let the bike lean.

Furthermore, if the tread does break away after some exceptionally hard turning, it’s so predictable that you can reel things back in like a fishing line. The second the pushing is over, the tire will hook right back up and send you on your way.

I’ve been impressed with the tire’s sidewall strength. Clearly E*thirteen knew what they were doing when they beefed up the sidewalls because you can get away with some pretty low pressures on these rubbers.

I usually like to run my tires a little firm as insurance in case something goes awry. However, for the sake of the test, one day I let 24 psi slip to 20 psi. Even so, I didn’t feel a hint of squirm throughout the ride and rode out a 5-foot drop-to-flat gone horribly wrong thanks to the extra traction. Additionally, punctures continued to allude me despite such a squishy pressure. If I had a tire insert at my disposal, I could see pressures dipping into the high teens.

In terms of wear, most of the tire looked like it was doing a great job after two months of hard riding except for the Race model’s high-tack side knobs. Some of the high-tack rubber was starting to show pretty major signs of wear, but I think they still have some good life left in them. That’s the price for having such a ridiculously grippy tire. For more longevity, I might buy the Plus model next time.

The only other thing about this tire that didn’t blow me away was the rolling resistance. Happily, its not a deal breaker. Even though it was a little more than the average tire, the tire still rolls pretty well for what it is: an aggressive, race-ready enduro tire. Just don’t expect to be winning any World Cup XC races on these. For this reason, I chose to run the tire in front with a WTB Trail Boss in the rear. If I didn’t, the endless undulation of Wisconsin trails would have probably gotten to my legs on rides. 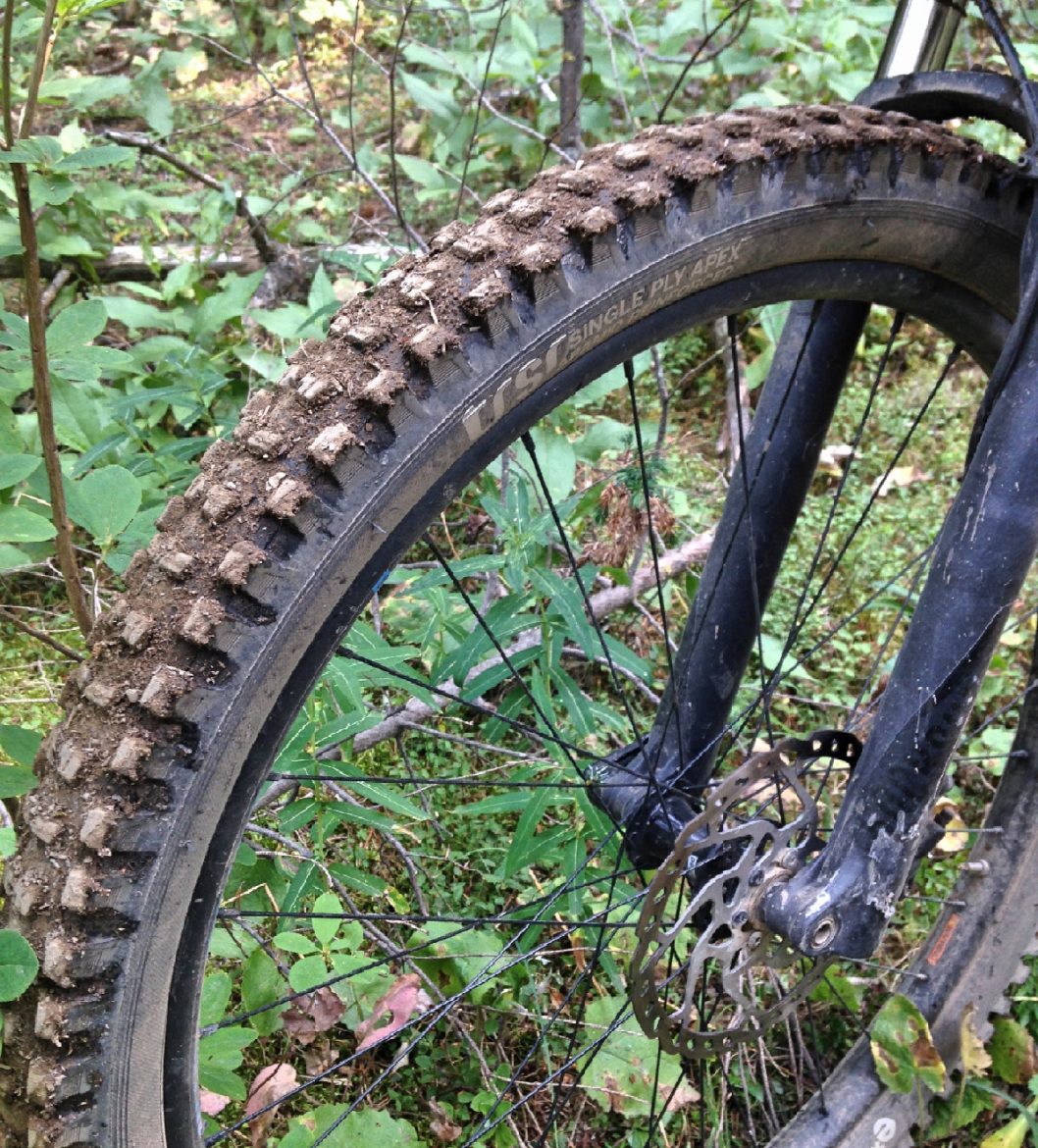 It’s looking like E*thirteen has struck upon the leprechaun’s pot of gold yet again. Despite not being the easiest rolling on the market, the TRS Race’s sheer amount of extremely versatile grip has given me confidence to ride things I would have never dreamed. Now I can boost janky jumps and take rowdy lines on hardpack, loose trail, and in the rain. Any enduro racer, aggressive rider, or someone looking for a confidence-booster should give the TRS Race tire serious consideration. Essentially, this tire is all about limits: pushing the limits of tire pressure, turns, your lines, your bike, and you.

That leaves only one question: How far are you willing to push?

Matthew Bonner
I love riding bikes around the country and am always looking for my next adventure. Whether it's five minutes from home or 1,000's of miles away, the simple joy of riding bikes is enough to make every ride great.

Insightful review Matt. Curious what front tire you typically run and how the E13 compares to that.

I usually run a 2.3 WTB Vigilante up front, and all I can say is that the TRS Race provides much more grip without tacking on a lot of rolling resistance. In essence, they are really just two sides of a coin. The Vigilante is extremely versatile tire that can be used in anything from cross country to enduro. It will provide a great amount of grip at a low rolling resistance, and can be used to great effect as a tire for long rides during a vacation that will make you confident without sacrificing your legs.

The TRS Race, on the other hand, is an extremely versatile tire that can be used for anything from enduro to downhill. Although it provides a shocking amount of grip, the rolling resistance is surprisingly low. It’s application would range from laps at a bike park to light speed downhill runs at your local trail system to more aggressive riding in the backcountry. Yes, your legs will feel it a little more (especially if you run the tires front and rear), but personally by the time I conquered my climb up Frisby Ridge (about continuous 4,000 feet) my legs weren’t in a drastically different condition than they would have been on the Vigilante. If you’re looking to boost jumps, rail turns, and haul down mountains on vacation and at home with little concern for your front tire washing out, the TRS Race is the better choice. It gives you more complete confidence than the Vigilante.

Really helpful feedback Matt. Thanks. This may well be my next front tire when my Minion DHF needs to be replaced.

Any feedback on wet conditions or wet rock?

The article doesn’t say what rim, and width the tire was mounted onto. I was a total e13 fanboy until I got a bike with 35mm internal rim widths. The 2.35 tire was just too square when mounted. E13 needs to come out with a 2.5 to match Maxxis’ wide trail tires.

I rode it on a WTB STP i23 rim with a 23 mm internal width. This is technically a littler thinner than is recommended, but it rode great. I prefer a rounder profile anyways!

44stevenson, this tire will handle wet rocks just as well as it handles wet roots: with loads of confidence-boosting grip. In wet conditions overall, I found that the tire was firmly and predictably planted (no unexpected washouts!) because its thick knobs were able to bite down into stable soil. I rarely had to reel in my riding to maintain grip (even while it was raining), and the tire did a good enough job clearing mud to maintain its bite.

I rode the Classic on the front of my 2017 Stumpjumper 29er with a Butcher out back for a season then switched to the Minion DHF/DHR. I was always blown away at how grippy the TRS was, and at how with just a little less aggressive tread out back my bike was super predictable in railing the front and slipping the rear a little. I switched to the Minions trying to save some weight. I was surprised when I didn’t notice the lighter weight when I switched, but I definitely missed the incredible grip of the TRS. Ill be going back in the spring.