Despite RAMBO's announcement back in February that these trails would be opening in 2011, at the time of this writing they are far from complete. However, there are several miles of rideable singletrack already available that offers great swoop and flow and really, truly feels like a pump track in spots! As a result it isn't very technical, but this machine-cut singletrack sure does flow! There are a couple of great views of Lake Lanier to be had.

The back section that is still under construction will have the most elevation gain. All in all, this is looking to be a great trail, and an excellent addition to Forsyth County. Until now, the only mountain biking available in Forsyth was a couple of easy miles at Central Park. Finally, Forsyth has a real mountain bike trail!

First added by Greg Heil on Dec 14, 2011. Last updated Apr 28, 2020. → add an update
Before you go
This trail information is user-generated. Help improve this information by suggesting a correction.
Getting there
Route to Trailhead with Google Maps
Turn off of GA Hwy 400 / US 19 onto GA 369. Drive 2.1 miles and turn right on Mashburn Drive. Go 0.4 miles and continue straight through the yield sign onto Charleston Park Rd. Go 0.2 miles and you're in the park. The trail starts just inside the entrance on the right.
I Rode It!   Add to another list 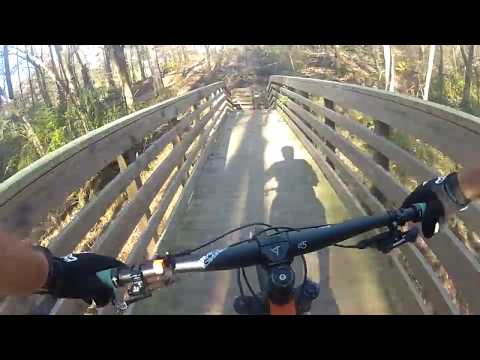 Q: The about trail section needs to be seriously updated please. The trails are in full working order!
asked by MTB_Crash on Jan 25, 2017
ANSWER
Please login or create an account.
A: Thanks MTB_Crash! You can update Charleston Park trail info using this form: https://www.singletracks.com/edit.php?collectID=1&type=i&itemID=4981&rowID=4981
answered by Jeff Barber on Jan 26, 2017    Feedback: Helpful | Not helpful
Q: Is the trail open? 4 days ago we were approached by a Parks and Rec employee that told us it was closed and we could be fined $130.
asked by on May 14, 2014
ANSWER
Please login or create an account.
A: The trails at Charleston Park in Forsyth County, GA are currently closed and under reconstruction. They are set to be completed and reopened by September 2014. For Trail updates please visit our website @ http://www.rambo-mtb.org/ or follow us on Facebook @ https://www.facebook.com/rambomtb. Thanks!
answered by dm_1013 on Jun 28, 2014    Feedback: Helpful | Not helpful