I recently wrote in these pages about a delightful supported mountain bike trip with Rim Tours. This wasn’t my first such experience—I’ve done the White Rim, the Maze, Bryce to Zion, the Sawtooths in Idaho, and Copper Canyon in Mexico over the past two decades. Each has been a wonderful adventure in a different beautiful location, sans the hard work of organizing, schlepping, cooking, and cleaning.

But on each of these trips, despite a deep appreciation for how hard these guides work, I’ve always slipped into a rose-tinted fantasy about quitting my job, pulling up stakes, and becoming a mountain bike guide. And my job is great—I’m a trail planner for heaven’s sake (the San Francisco Bay Trail—a planned 500-mile path around the entire San Francisco Bay). I actually get paid for this. But let’s be clear. I don’t spend my days walking or riding trail, musing about alignments or the greater societal good provided by this alternative commute option—I sit in front of a computer, just like you. Or most of you. Okay, sometimes I go out on the trail. But not much.

Anyway, from the lip of the Grand Canyon on Labor Day Weekend, a dewy Lagunitas IPA in hand, I pondered that vast expanse of mesmerizing, tough-as-armadillo hide landscape. With a light wind coming off the Navajo reservation across the divide, I entered into a stunned reverence. My home in Marin is a beautiful place. But there is something about the Grand Canyon—its immensity, its unknowableness—that places one in proper scale to this world. Much like the “one minute to midnight” mark that humans represent on the timeline of the universe, a beautiful humility is realized in the face of such geologic infinity. The faces of the other guests, now ensconced in quiet awe, told me they’d arrived at 11:59 as well.

So, what would it be like to have this as your office? To wake up before the birds, under the stars, your work day riding bikes adjacent to one of the seven wonders of the world? I listened to the guides’ campfire stories with a keen ear, the origin stories—how they came to this work—to the horror stories, these being the ones the guests most wanted to hear. There was the lady who insisted she’d ride everything then blamed the guide for her lack of skill, the one-percenter who brought his assistant, pulled up stakes at 2:00am after an important business call and got a chopper out, and many more tales they didn’t share. Despite this highlight reel, when I interviewed Beth Roberts, one of our guides on the North Rim Grand Canyon tour, she said that the nightmare guest was actually quite rare. 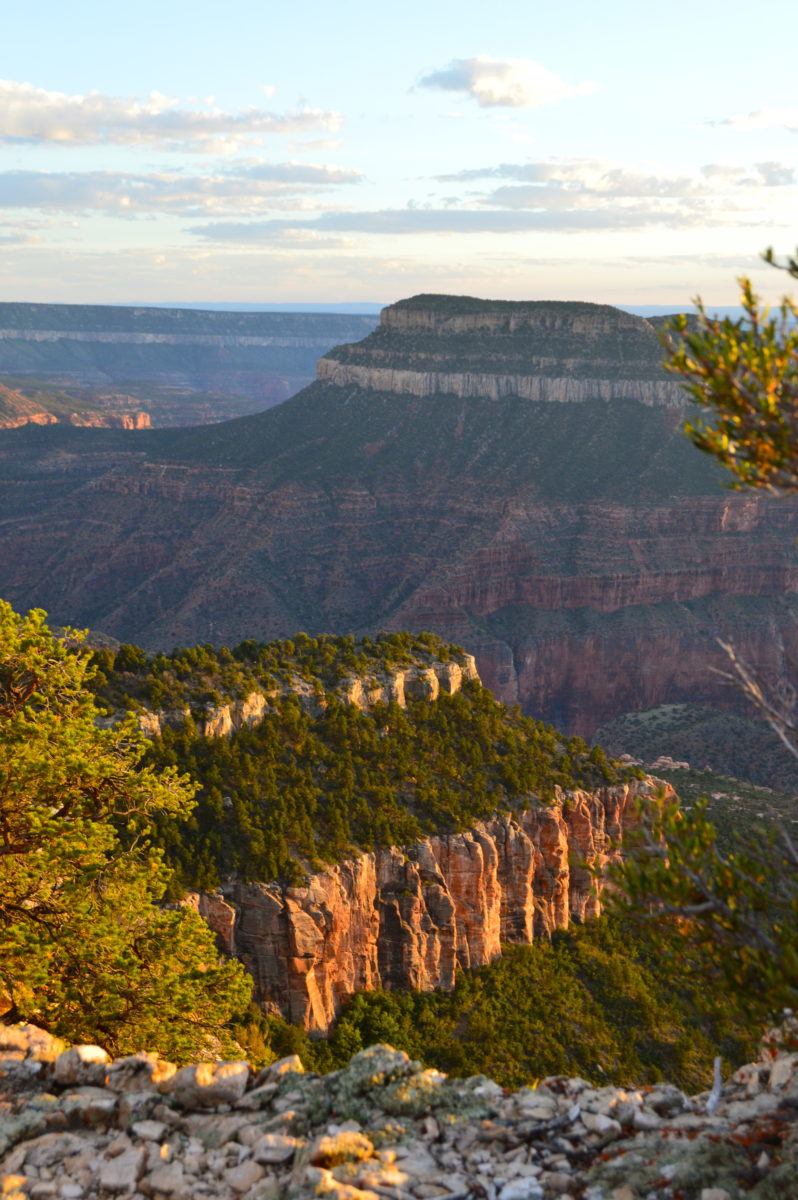 “I get this question all the time! But I don’t have my go-to story yet.  Which probably says a lot, the people that want to go on mountain bike/camping tours are already super cool, chill, and ready to maybe be a little uncomfortable at times. They choose this for their vacation, so that really helps self-select.”  Turns out her worst story didn’t actually involve a Rim Tours guest.

“This fall however, I did have one trip where in the first hour we had one client with serious breathing issues, 2 flat tires, 1 crank arm fall off, and our favorite shade tree (a juniper 100s of years old) where we always set up lunch, had been chained, pulled out of the ground by an ATV or something, and burned. It was still burning when my co-guide found it. They left behind Busch beer and Skoal tobacco.  Besides that tree, the trip turned out to be one of the most of fun of the year.”

Roberts, 41, has been with Rim Tours for six years and she stays “because they treat me like family. But at the time I took the job, it was because I could see that their schedule would allow me the opportunity to be at home enough to keep a dog, friends, and a relationship. Other guides may be out for a month or so at a time; I am gone for four days, with a few days home, during the busy season.”

While not guiding, she lives in Moab with her dog, Jesse. This is actually one of the hardest things for her, leaving the love of her life for so many days on end. And the low pay. And guests who tip poorly.

“We work really hard out here to ensure our guests have a good time, so when they tip stingy, it hurts.”

And really, the groover has to be one of the worst things about being a guide. For the uninitiated, the “groover” is the portable toilet carried by all responsible outfits out here in the wilderness. While the modern version is a hearty sealable plastic vault with a nice smooth seating surface, the original model was an ammo box that when sat upon for the doing of one’s business would leave discernible grooves in one’s posterior due to its sharpish edges. This delectable pot of yum is packed up by the guides and loaded on top of the van with every move, and is pumped out at the end of the trip at an RV dump station. I asked if they’d ever forgotten the groover in one of their many moves around three states on countless expeditions.

“My co guide and I did forget a groover once, and picked up a simple set up from a big camping store which did the job for the week. It wasn’t ideal but it wasn’t bad. The worst was the moment when we realized–oh shit, we forgot the groooover!  One of my favorite parts of the job is solving problems, and this was a problem to solve.”

As for advice to anyone thinking about quitting the rat race to become a mountain bike guide, Roberts emphasized the importance of being a “people person” in this job, as well as the need for problem solving skills. And clearly one needs a deep and abiding love for the out-of-doors. On a different trip many years ago, a guide told a story of an interview process they’d just completed. One of their potential hires told them “Well, I don’t really like camping…” Wow. Unclear on the concept.

Indeed our first day featured an epic downpour, and while I thought it was charming as all get-out, I had the luxury of being hunkered down in my tent for the deluge while the guides made snacks, set a fire, got dinner going, and wrangled the poop box off the top of the van and placed it down the trail a tad. All in the name of customer service!

I asked if she ever got tired of riding the same trails, amazing and beautiful as they are.

“No, I really never get tired of being paid (albeit pennies) to ride my bike.  It’s fun knowing trails well and being able to help others find the line and/or help them know what to expect and how to ride any trail.  I have plenty of time off to find new trail to keep things interesting. I also like to ride different bikes to keep it interesting—this year I guided a lot on my Trek Stache 29+ hardtail. It was super fun, especially when I can’t go as fast as I might want down a trail.”

And speaking of fast, when not guiding, Roberts spends her time at home in Moab “chasing folks like Kelli Emmett and Danny Pate.” So there’s that. Guiding keeps you in shape enough to ride with legends in your down time. But Roberts’ point about customer service is an important one. Every supported trip I’ve been on over the years has featured friendly, outgoing, hard-working employees of their respective companies. So if you want to be a mountain bike guide, after you’ve checked off love/knowledge of the outdoors, bike wrenching and first-aid skills, ability to endure homesickness and terrible pay, remember you’ve still gotta wash all the dishes and smile while doing it.

Oh, and it’s your turn to get the groover.

Many thanks to Beth Roberts for enduring my barrage of questions, and to Rim Tours for a great North Rim Grand Canyon experience.

Hi Maureen, Loved your article some great stuff on the highs and lows of guiding.
I run my own guiding business in the UK and if you or any of your readers want to check it out feel free to drop me a line @ http://www.footonthemountain.co.uk where I’ll be more than happy to give out free advice to anyone heading over the big pond.

Thanks for sharing! Garry.

PS, a 500 mile mission along the Bay, that’s longer than England