The wind picks up, but the clouds aren’t moving. Looking at the sky, the light gray mass that stretches toward the horizon is more “cloud” than “clouds.” A few drops of rain hit the trailhead’s sign while I put on my gloves at the last second, one foot clipped in and the other planted in the dirt.

But we’re already descending. I’m with three other men, all riders for Chumba USA and Wanderlust Gear, who’ve lent me a bike and asked me to come on out and start 2016 off with some bikepacking on the Arizona Trail. 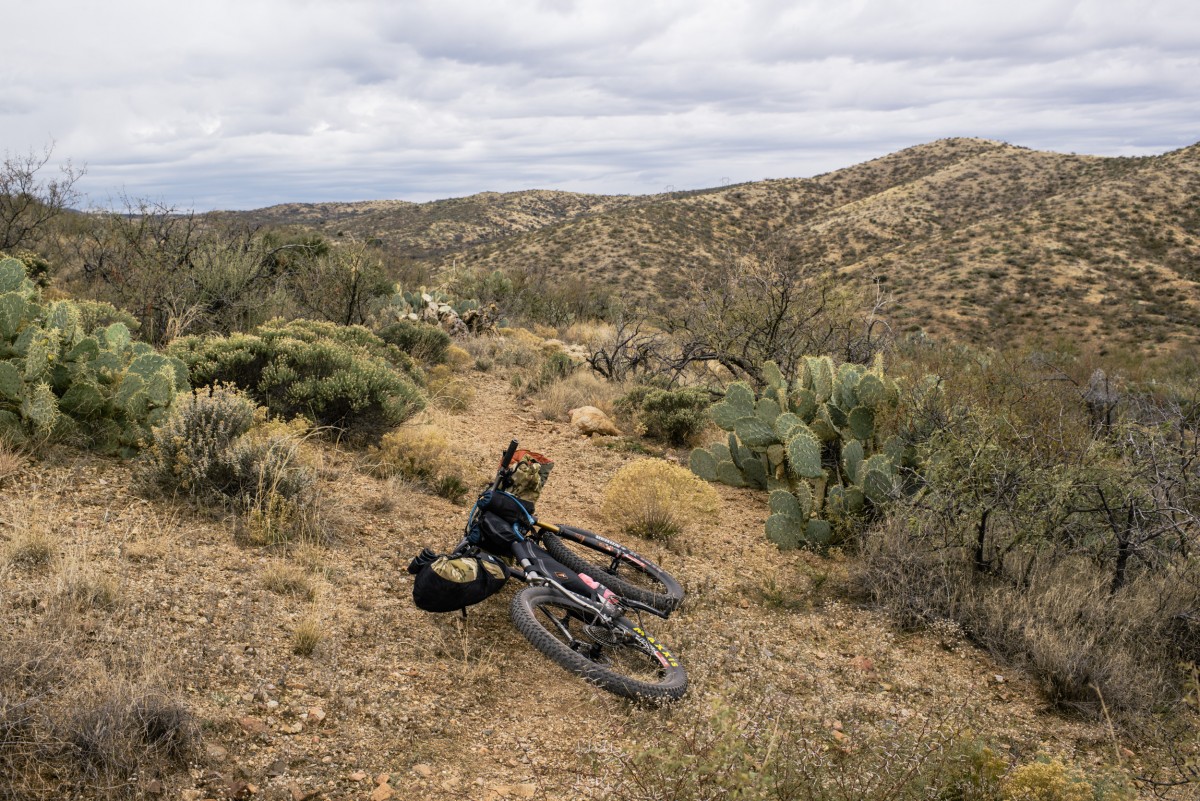 The drop in at Oracle is gently sloping, with a few hills to warm up the legs. There’s 100 miles of some of the most scenic singletrack from here to Superior, Arizona, our end point. The forecast had said warm, sunny and mid-60s. But in the last two days the wind took a different direction, bringing a winter storm up northwest across the state. We all made time to be out here, and we don’t have a lot of extra time to wait out some storm. Hell, this might just be something that blows over in a day! So, with blind confidence on our side, we head out on the Arizona Trail. 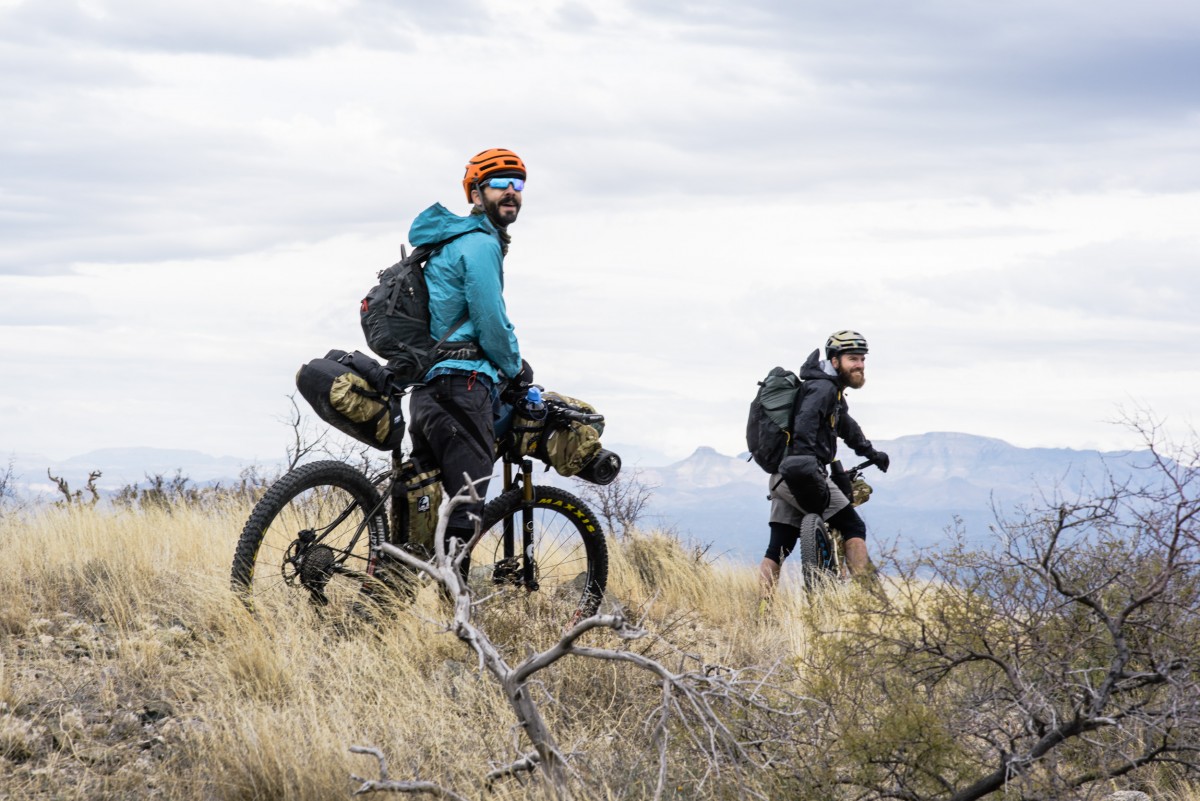 The wind and cold weather, the current threat of rain, that’s just part of the ambience as the distance grows between us and that small town of Oracle. Keeps it all spicy, these dangerous accents to a short jaunt on some fancy, made-in-USA steel and titanium hardtails with the latest in tire widths. Those tires are ripping on a trail that, in every day of this trip, I’d be impressed with the quality and upkeep on. 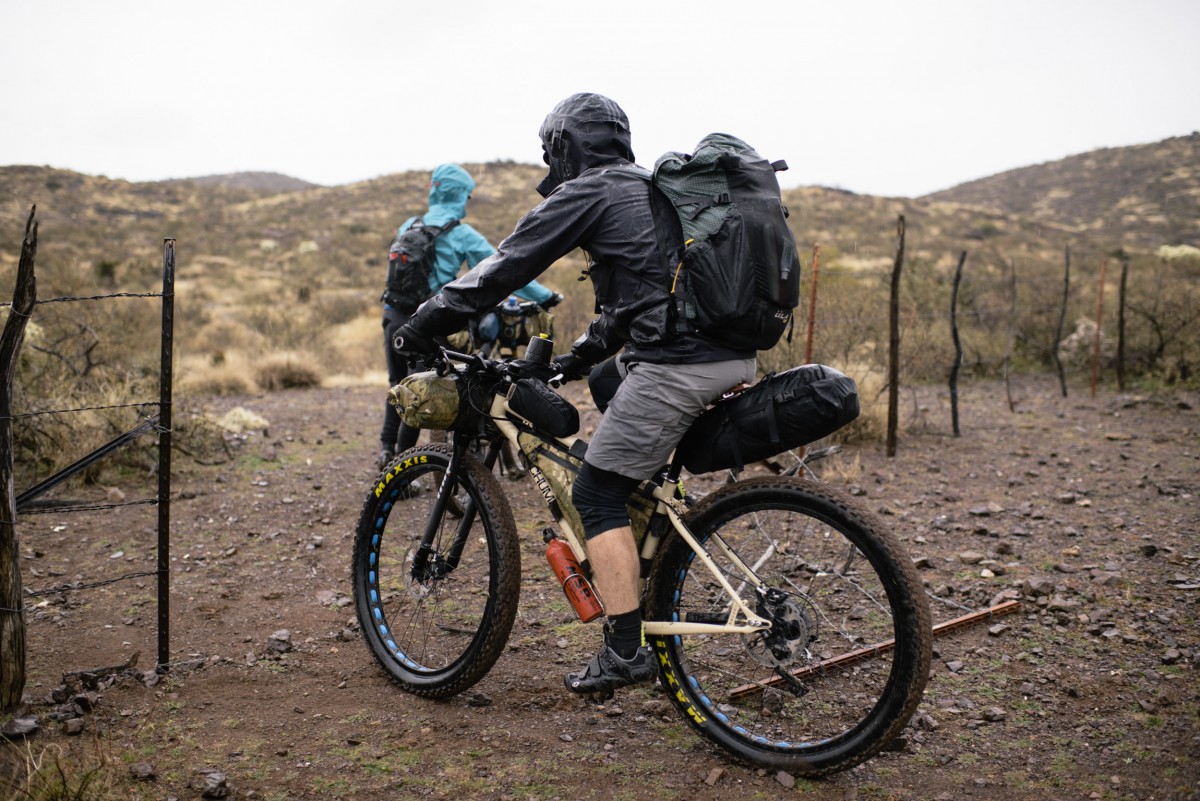 It says something that, in the face of heavy erosion, the AZT really holds up. The first day put us 25 or so miles in, camp set up near a cattle corral and gigantic water tank. Through the day we’d heat up on switchbacks, lose our hands to freezing numbness on the descents, and break even at the occasional cattle gates made primarily of barbed wire.

This technical trail, with its edges lined with cactus, doesn’t allow much room for mistakes. Holding your line is imperative, and our first day being 100% on singletrack, numb fingers on brake levers would just need to be tolerated. The descents were so twisty and fast that the only part of my body I could feel was the smile on my face.

Downed wood around our camp was quickly gathered for a fire. The remaining mesquite brought out the group’s engineering skills as we tried to make drying racks for our soggy clothes. 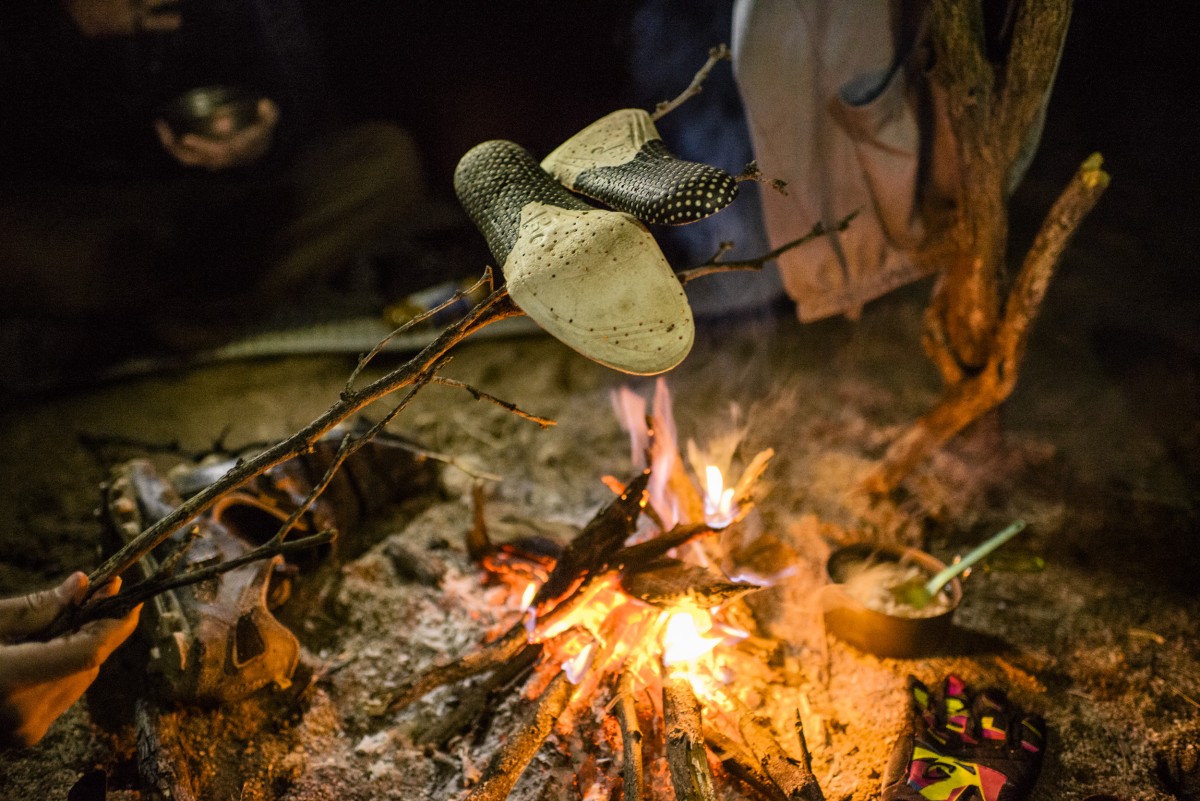 Sunlight broke through the next morning, cutting past the Tortilla Mountains (what a name) as we made tortillas for breakfast (what a breakfast). We’re saving space by only having one of those mega light circus tents by Black Diamond, but for a group who ate mostly powdered bean mix for dinner, it’s cozy quarters. We might not pack down very small, but the tent does. And true to desert form, the sandy trail was dry by the time our bikes were loaded. 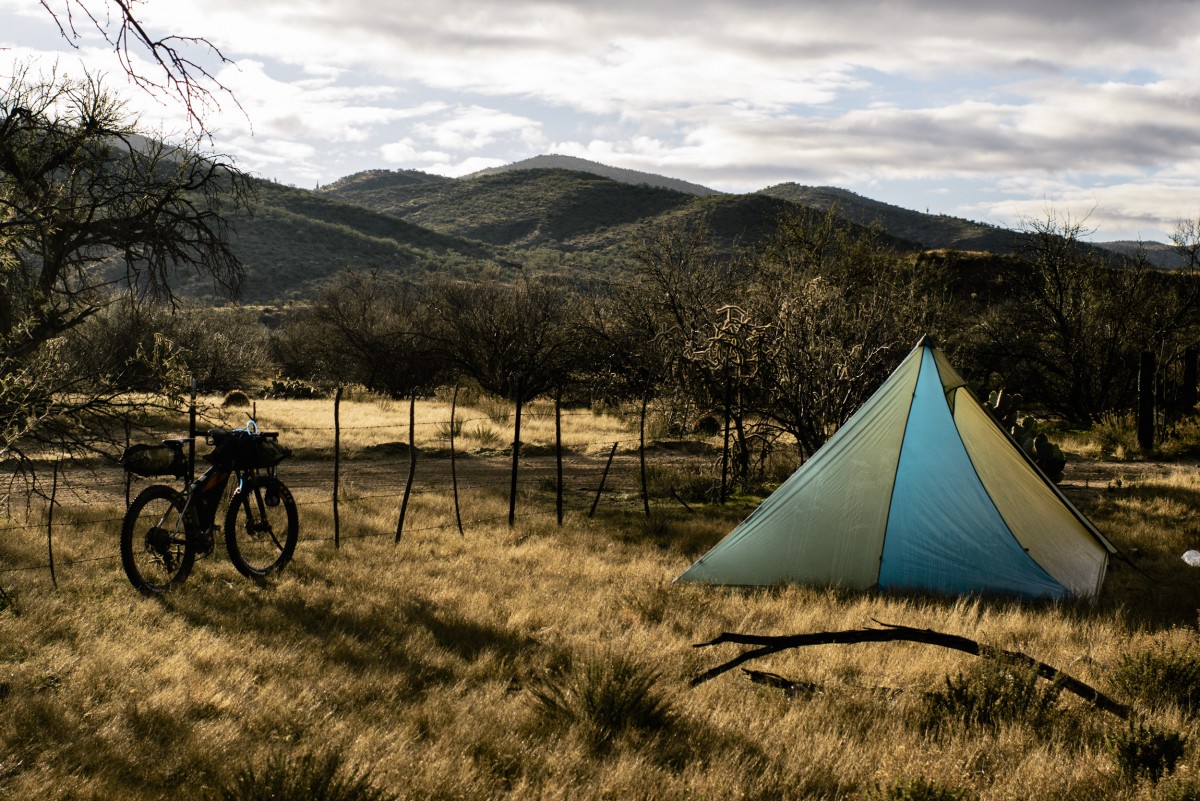 We keep the tempo up through the afternoon, an attempt to make up for low mileage the day before, while the weather is on our side. It’s all we can do to keep our minds off the lingering clouds ahead and to our sides. The charm of the AZT is undeniable, and we spend most of the day joyfully ascending and descending towards a mountain that looks like Mordor. The winter desert is a quiet desert. A lone cow along the scrub is our only companion so far, though she keeps her distance from the trail. 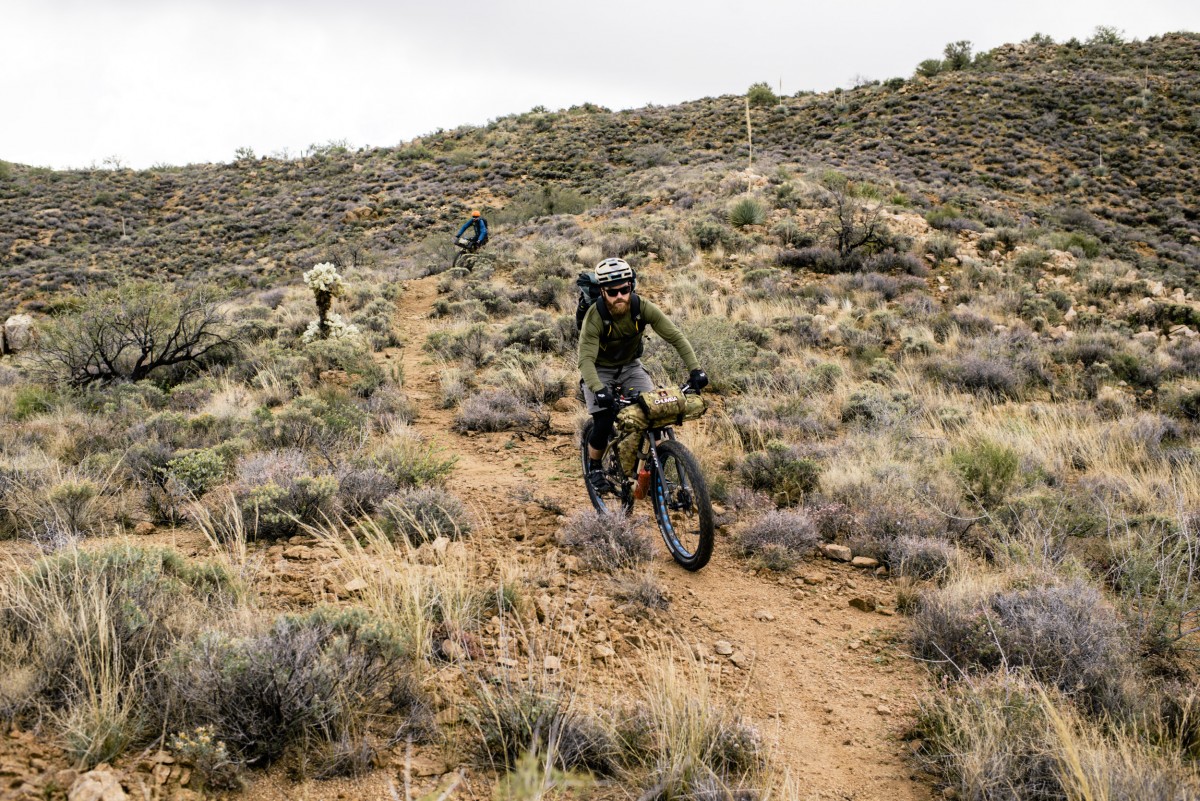 By dusk, I’ve completely lost count of all the canyons and washes we’ve gone through. The rain has caught up. As best we can tell from topo maps in the dark, we’re another mountain range away from the start of the famed Gila River stretch of the AZT. We’re also just about out of water, because, you know, desert–so in a twiggy, low-lying canyon our group splits in two. One half follows a rubber pipeline back up the trail to find its water source, while the other sets up camp. The rain, as it seems to do every night, returns. Drenched, but reunited, we take turns filtering and boiling. The soft ground will make for comfortable sleeping, aided by a whiskey nightcap out of our designated liquor-bladder. 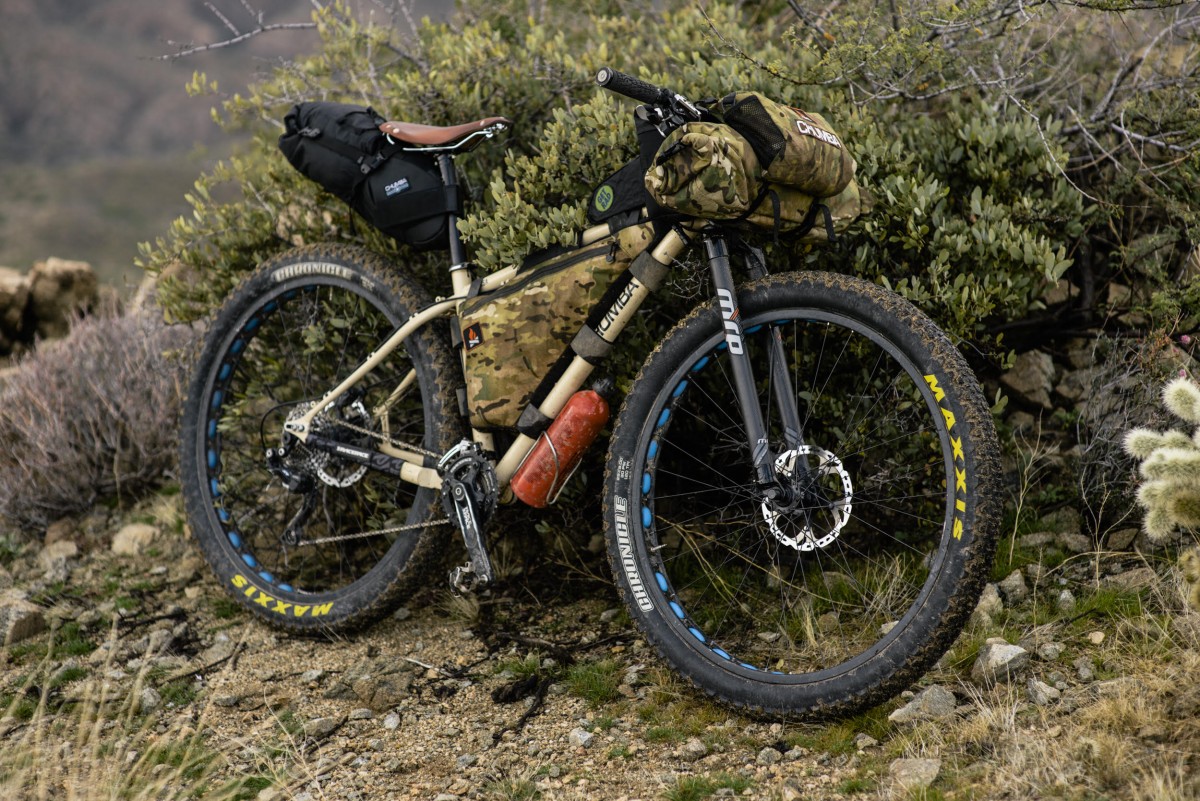 Come first light, it’s clear none of us are wasting time. Our attempt to make up miles the day before didn’t work out. Sitting in wet clothes, the irony is not lost on us. But it’s a new day, and warm morning light does more than I can say for lifting spirits. That famous, rusty gate that welcomes trail users to the Gila River wouldn’t be something we see until the afternoon, for now we rip on a ridgeline. This is that good desert riding, y’all: dodging boulders, riding tight lines, ducking through the cat claw. It’s the kind of riding that lets you really dig in, the kind where you willingly contort yourself to get that body weight in place to hold a line, the kind where you dare yourself to stay off the brakes so you don’t lose that feeling of flying. 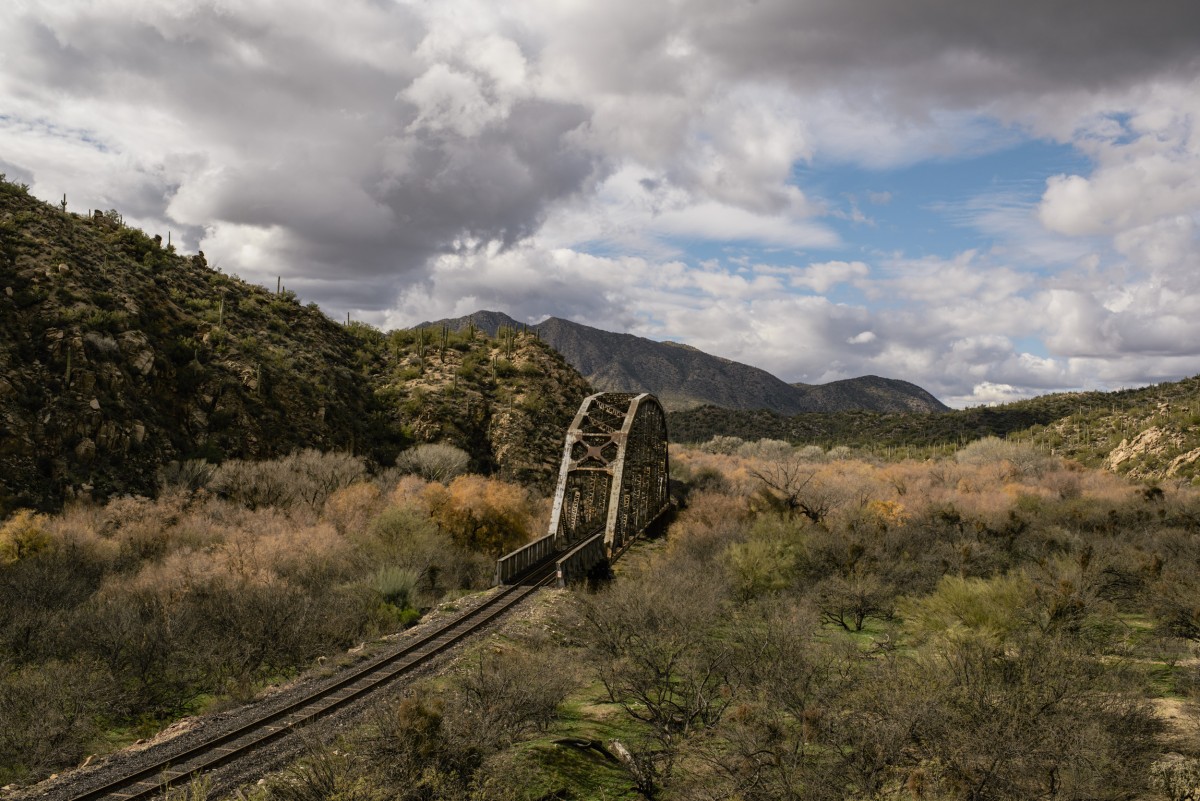 An old railroad bridge welcomes you into the Gila River valley. The murky water stays hidden by the thriving scrub and cottonwood. The trail sneaks its way above, where we watch the river in between drops into various canyons, washes, and arroyos. This section is undoubtedly the toughest. Cholla fruit finds its way onto our clothes and tires again and again, with drops pushing our XC-travel forks to their limits. The trail snakes its way around the sandstone mountainside, occasionally becoming a line carved deep in the rock itself when no way around it could be found. Pedals, rims, and derailleurs all get their fair share of contact. 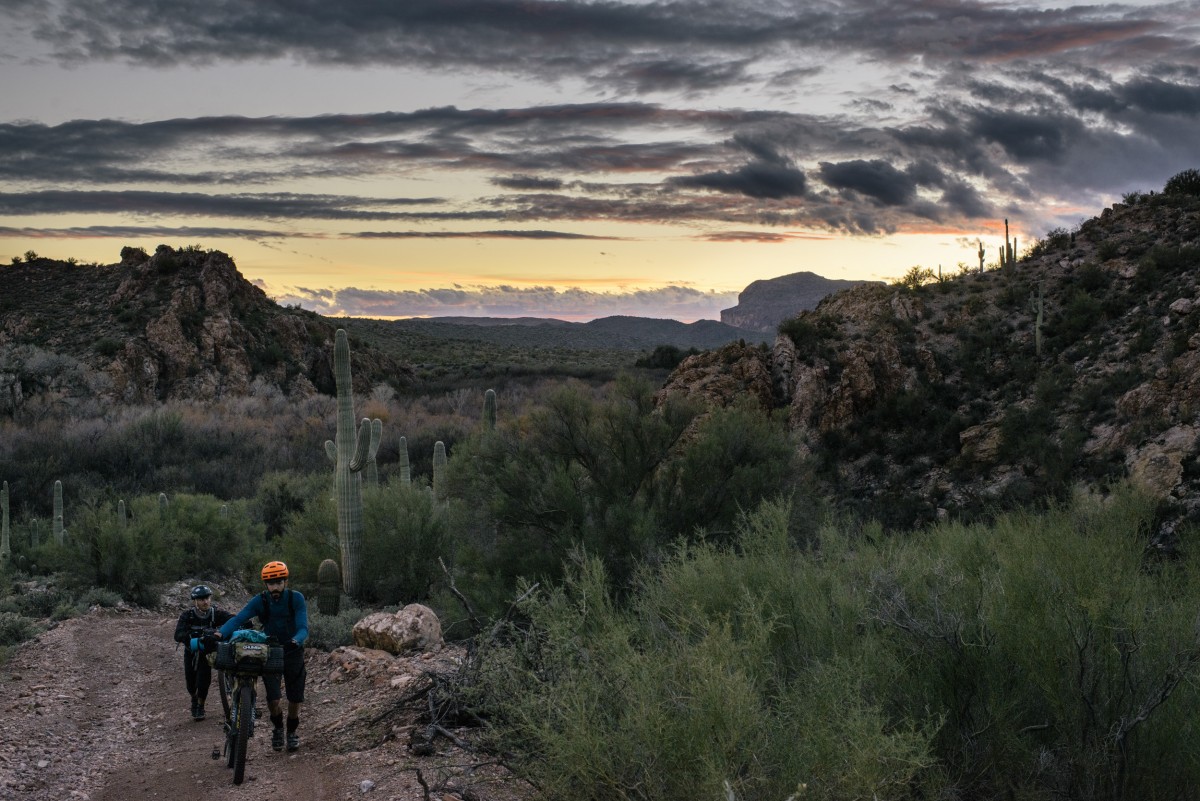 But it was just the high-energy riding we needed. After so much slogging, pleasant weather and endorphins have us riding high all the way through a painted sunset. Though we’ve had some minor accomplishments in making up time, a radar check and an early dinner bring bad news. We have a window. The next two days would be 100% rain and chilly temps. We’ve known an 11-mile climb was ahead of us, the last real challenge before a long, winding descent into Superior. At dusk we made a decision: do it now, while it’s dry, in the dark. 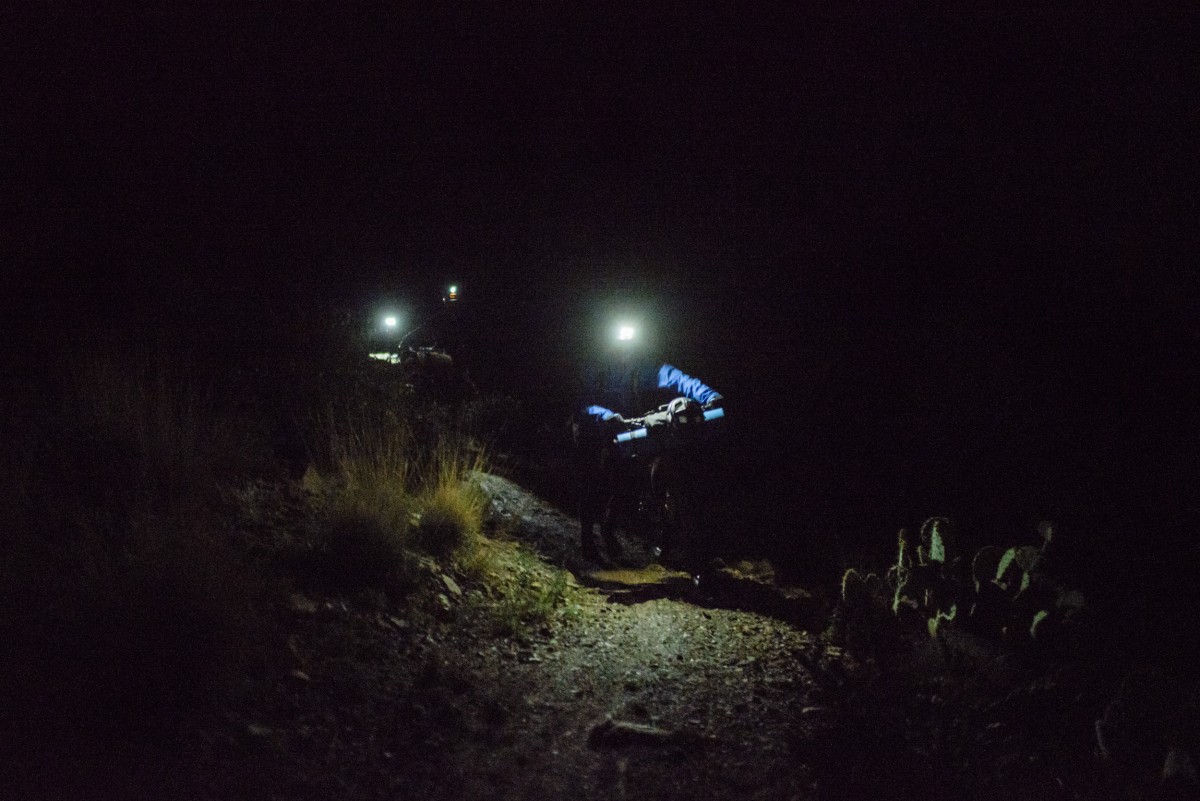 For six hours we pushed our bikes, fatigue building as the night wore on. The darkness played tricks on us, with the light from our headlamps disappearing over the edge of the trail, psyching us out of riding some portions that in the daylight were probably easily ridden. Relief came at 1am when the trail topped out and finally began descending. We would have celebrated if it weren’t for total exhaustion. Cactus dominated this side of the mountain, but we found a spot with just barely enough free space for our tent to fit. Once in our sleeping bags, as if on cue, the sky opened up and our tent was pounded with rain through the following morning. 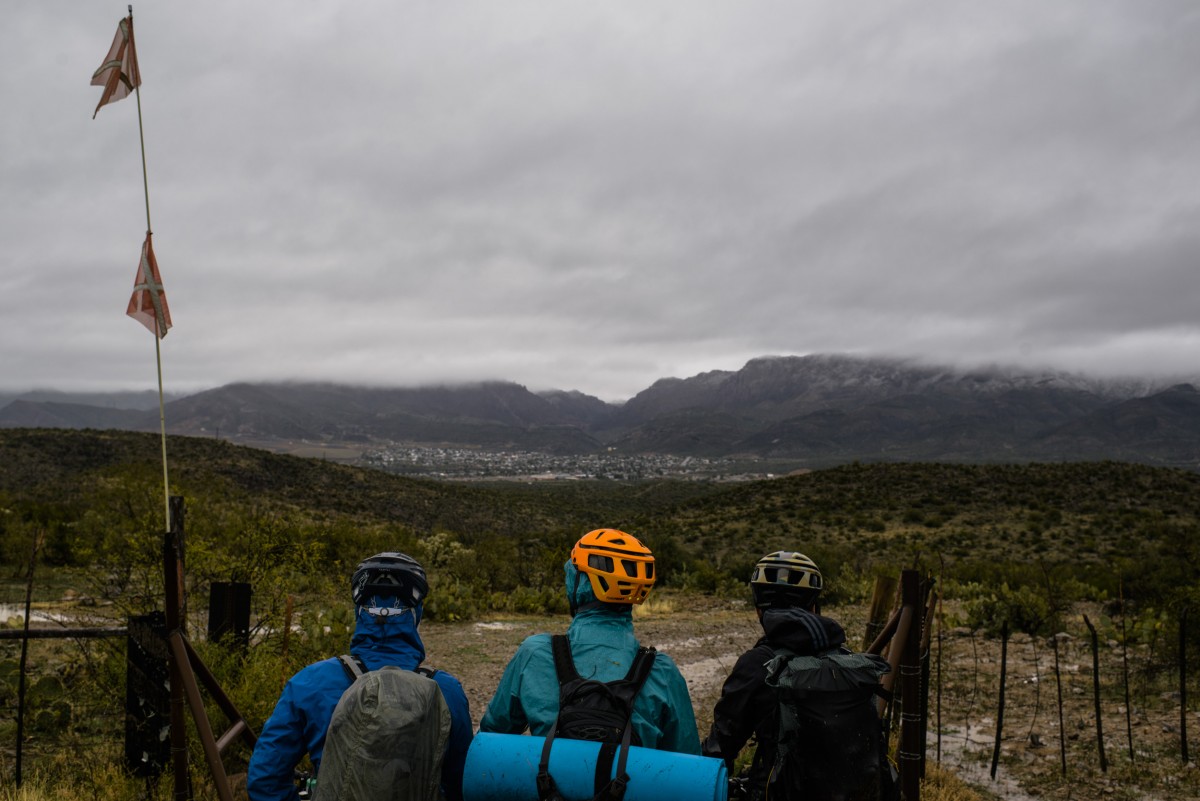 Town was so close. As planned, we had a jeep road that would lead us right in. Not as planned, the deluge of water over the last eight hours (still coming down) had turned this road into a gauntlet of flooded crossings. The “road” was doubletrack, cut into the dirt and paved with rounded stones ranging from softball to basketball size; hard to navigate when dry, and now they sat lurking under a constant stream of water waiting to bash a pedal, a derailleur, or just buff a tire enough to kick us off our bikes and back down into the water and mud. 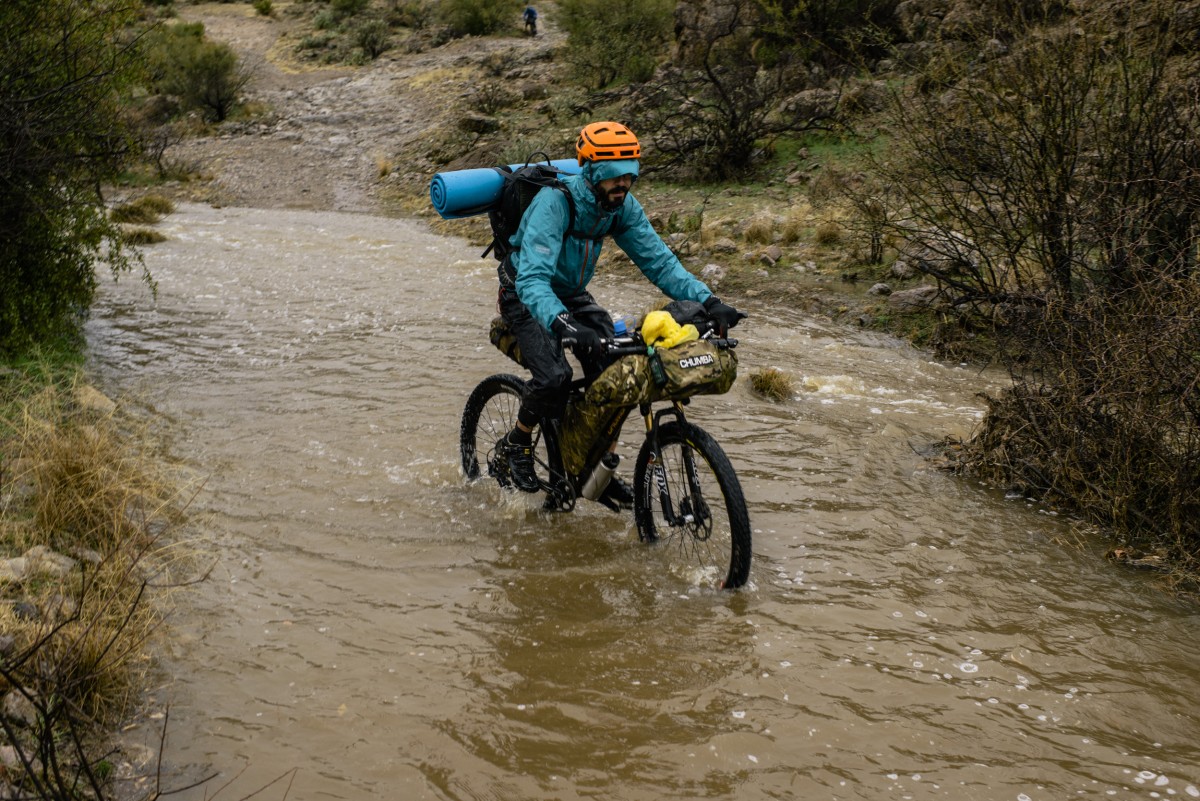 You could hear the highway that passes through Superior. At most, it was ten minutes away. Dry beds, showers, and solid food were all so close. Where we stood, everything not in a dry bag was soaked. The temperature hovered barely at 40º. If it looked like one of us was smiling, it was more likely clenched teeth to help control the shivering.

And so as our luck had come to be, one final creek crossing stood between us and our end point. The afternoon had been an exercise of riding in hub-to-bottom-bracket-deep streams, presumably with a road somewhere beneath the water. In crossing, we alternated between churning across currents in our granny gears, pulling up the front wheel and praying after sprinting into narrow, deep cuts of water, and passing our bikes bucket-line-style over slippery rock faces. But now, just ten minutes away from town, one raging river made of storm water had cut its way through the desert, bending trees at its banks. 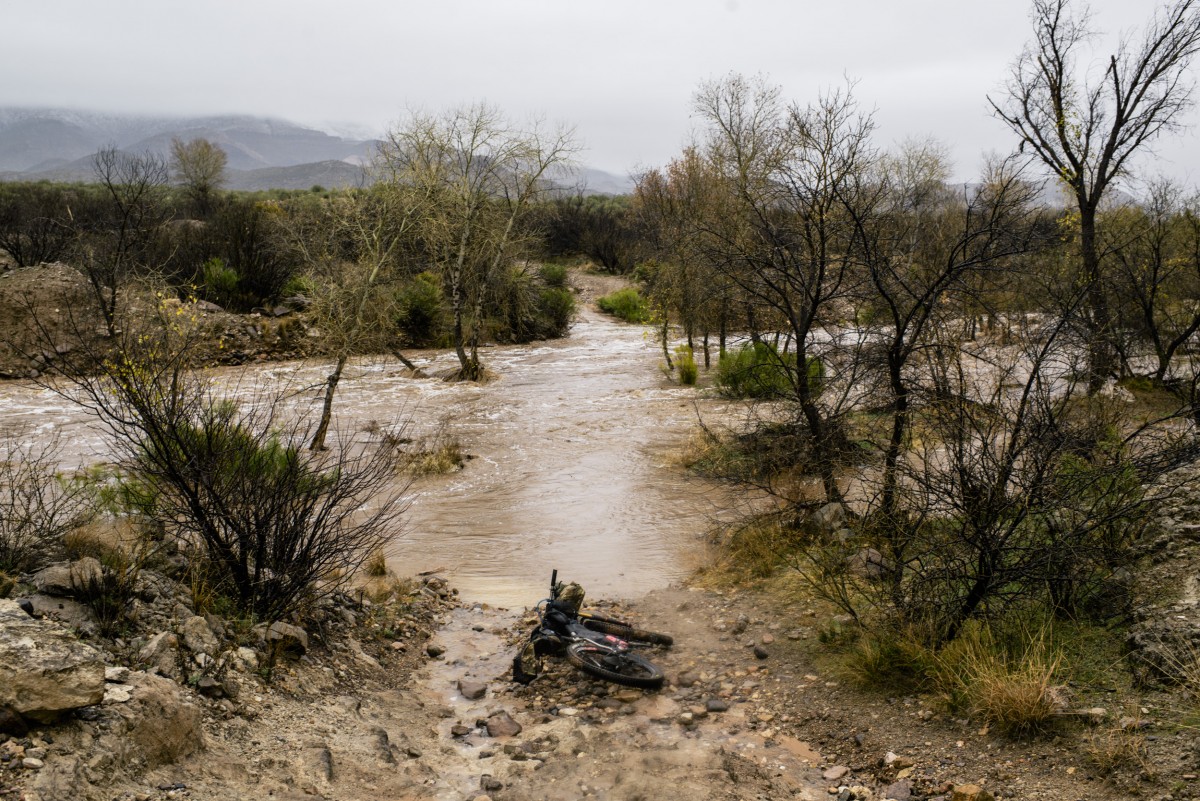 We burned our last few hours of daylight walking the riverbank, hoping that one of us would find a shallow point to pass. Desperation sends me into the water over and over, hoping to find a shallow enough point to float the bikes. Though the rain has finally paused, the current was still strong enough to push against me. Water rises up to my belly button. One attempt after another, I’d come back out of the river covered in silt, shivering from the cold, after only making it a few feet out.

At this point, we’d have to backtrack over twenty miles for an alternate route. Do we just camp here in the mud and rocks? But the universe finally gives us a break. The slate gray sky is holding out, but this temporary river begins to subside in the rain’s hiatus. We’re desperate and filthy, but seeing the few feet the water line has receded restores our hope.

Footsteps are careful, we make the decision to commit to crossing. We all wade in this time, walking sideways and leaning heavily against our bikes to fight the current. I’m holding my camera in a dry bag over my head, and the water climbs up our knees and thighs. But we’re already much further than I’d managed to get all afternoon. We hit the halfway point and no one acknowledges the wet and cold. We bob in and out of a few deep spots, and suddenly we’re on a muddy road covered in flood debris, the river behind us. The adrenaline wears off, replaced by the euphoria of seeing open signs for a motel, a grocery store, and most importantly: a pizza place. We’d made it out.

Click here to read all about the Chumba Stella Ti that I rode.

Brent Knepper
Adventure photographer and storyteller, Brent has spent the past few years riding trains with a bike to explore and photograph the U.S.'s wild spaces. A nature fanatic, and proponent of accessibility and sustainability, for him adventure is for everyone and starts the moment you walk out the door. You can see more of his adventures on Everything Will Be Noble.

Great story great pictures. I never rode out west, looks like a new entry on my bucket list.

Great story…..great photos…..great ride! Sounds a bit like this year’s 24 Hours of the Old Pueblo……NOT what one expects in AZ. BUT always great MTB’ing!! 🙂