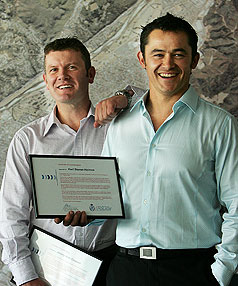 Back in 2007 Jeremy Simpson and Karl Holmes were mountain biking in the Wainuiomata hills of New Zealand when they encountered Graeme Burton on the trail. Burton was carrying a shotgun and at first the guys didn’t think anything of it since people often hunted in the area. But when Burton pointed the shotgun at Simpson both men knew their lives were in serious danger.

On the run from police, Burton had recently killed Karl Kuchenbecker and Simpson and Holmes passed right by Kuchenbecker’s body as they fled the killer. Burton managed to shoot both men at least once – Holmes in the left arm and hand. As the two bikers fled the killer, Simpson stayed calm and even thought to cover up the trail of blood they were leaving behind.

Eventually the men were able to help police locate Burton and he was ultimately shot and captured. For their actions both men were recognized with commendations at a ceremony just last week. Could this be the basis for yet another mountain bike related film project? I hope so.

I’ve encountered people with guns on the mountain bike trail a couple times and it always makes me feel a little uneasy, especially in more remote areas. I’ve also been shot at while mountain biking, though it was just kids with paintball guns at Palmer Park. Still, being targeted is not a good feeling, especially when you can’t see where the shots are coming from.

Mountain bikers are far more likely to be injured or even killed due to accidents on the trail but it still pays to be aware of your surroundings. Just follow Simpson and Holmes’ examples and stay calm – you just might end up a hero!

This makes me want to take a gun clinic so I’m proficiant enough to protect myself from some murderer on the trail,or I could build me a James Bond type mtn bike so I have a machine gun built right into my handle bars so when I run into somone like this I could just let him have it right there on the spot……..

My fellow Kiwis getting shot??!!. No need to wear bright orange vest in these circumstances. Never come across anyone toting a gun on a trail in NZ or here, BUT…several times it’s been crossbows.