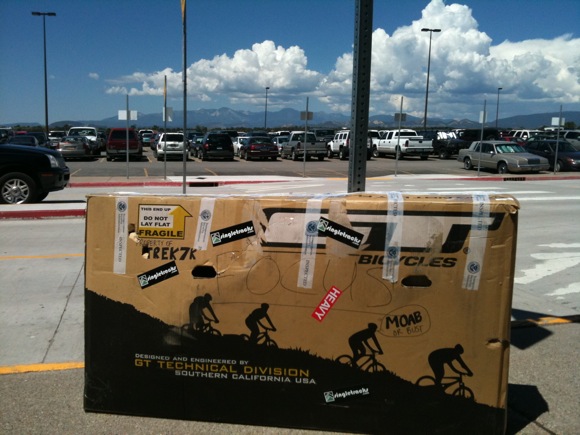 To me, the most stressful part of planning our recent Durango to Moab hut-to-hut trip was figuring out the transportation logistics. During the trip itself things would be simple – pedal our bikes from one hut to the next – and the San Juan Hut Systems had all the instructions we needed. Getting to the trailhead and returning home was another story and took a combination of planes, vans, cars, and cash to make the round trip a success.

Flying with a mountain bike

Jake and I both took commercial flights into Durango the day before our trip left but our bikes took slightly different journeys. Jake has “status” on United and so he was able to ship his bike out the day before for $85 (each way) which included pick-up at his apartment and drop-off at Durango Mountain Resort (our lodging for the night before we left).

I opted to check my bike on Frontier which I was told would be risky since the airline could lose or delay my bike. The fee was surprisingly reasonable (just $50 each way) and I crammed my box full of clothes and gear for padding and to get around paying to check an additional bag. On Frontier bike boxes have to be under 109 linear inches (length + width + height) and must weigh under 100 pounds. Even my 29er plus gear was well under both size and weight.

I didn’t have the original box my bike shipped in so I spent several days the week before trying to track down a suitable box in the Atlanta area. My local bike shop charged me $5 for a used cardboard box which didn’t end up fitting my bike anyway. Ultimately Performance Bike hooked me up with 2 free boxes (first one was too small) and even loaded me up with padding, zip ties, and other packing material. With the box I only had to remove my pedals, handlebar, and front wheel and everything fit easily. No damage from the airline in either direction!

Leaving a car at the end of the route

Matt and Nate took the Porcupine Shuttle to Durango after dropping their car at the end of the route in Moab. I don’t know the whole story but I believe they were allowed to leave the car at the hotel where they stayed the night before the night before the trip. Porcupine Shuttle dropped them right at Durango Mountain Resort which is about a mile from the start of the route.

Getting from airport to trailhead & gear storage

Durango Mountain Resort is actually about 25 miles north of town so the airport shuttle bill was a little high (over $100) for just two of us but we really had no alternative. Once at the resort we decided to opt for an alternate trailhead that was about 15-20 miles away which required yet another shuttle. This one cost 120 bones but split 4 ways it was comparatively reasonable.

Since Jake and I would be flying out of Durango we left our bike boxes and extra gear at Durango Mountain Resort. They had a dedicated storage area in the main building and even gave us claim tickets for our stuff. Jake left a laptop with his stuff and it was still there when we returned. Nice.

Returning to the start

Once in Moab, Matt and Nate were able to hop in their car and head back to San Francisco. Actually, they spent the night in Moab to rest up before the epic 15-hour drive. Good call because after Day 7 of riding we were all spent. 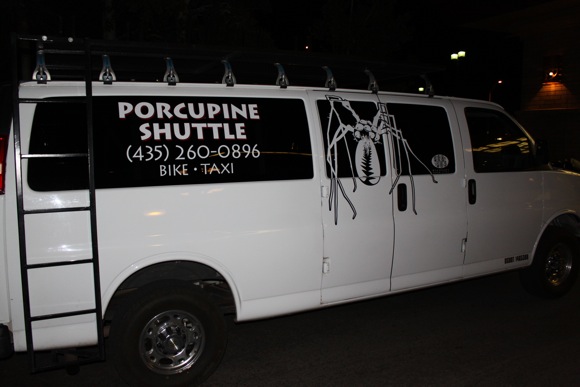 Jake and I caught the same Porcupine Shuttle from Moab back to Durango Mountain Resort. It would have been much more cost effective had we all shuttled from Moab to Durango at once but that’s part of the challenge when the group chooses different modes of travel – lesson learned. The trip from Moab to Durango takes at least 3.5 hours by van and the latest the Porcupine folks will leave Moab is 5pm since that means the driver won’t return to Moab until the wee hours of the morning.

Our hotel for the night after the trip was in the town of Durango so Joey, our driver, graciously drove us up to DMR to pick up our stuff then back down to our hotel in Durango. We got into the hotel after 9pm that night and could have easily made an early morning flight back home (though both of us goofed and bought airline tickets for Saturday instead of Friday). The hotel offered a free airport shuttle which was much appreciated.

I shudder to think about the cost and time involved in getting to Durango and back but in the end it was all worthwhile. However, when planning a point-to-point trip it’s important to consider both start and end points in terms of logistics. We considered a similar hut-to-hut trip from Telluride to Moab but getting to Telluride (and back) would have been even more difficult (and expensive) than Durango. The ideal logistical solution is to have a non-rider sag the route with you but of course this isn’t always possible. My advice? Figure out all the logistics before you even book your trip so you’ll have a better idea of the total trip cost and you won’t be stressed.

Absolutely. Having a sag/support vehicle is the way to go if you can swing it. Some tour operators offer a sag support team to carry gear, set up camp, and even cook food along the way. In fact, a little birdie told us just such a service may be launching along the Durango to Moab route next summer. The best part is, the tour operator takes you back to the start so they can shuttle the next group.

The following is on the San Juan FAQ page:

No vehicular assistance is provided or allowed on either of The Routes due to the nature of our USFS/BLM/Private Ranch Special Use Permits. San Juan Hut Systems is not responsible for difficulties due to weather or natural conditions, equipment failures or medical emergencies and any associated rescues. Guide Services are available through Peak to Peak Bicycles in Ridgway, CO for The Telluride to Moab Route. Their services include a guide for your trip who can provide mechanical and medical assistance if need be and shuttle service from Moab back to the Telluride area.
***

Is there another router for driving?

Yes and no. Technically there are dozens of routes between Durango and Moab so if someone wanted to do this on their own, they could just map a route using forest roads and trails and find camping areas along the way (plenty to choose from, plus primitive camping is typically permitted on most FS land). We saw dozens of people “car camping,” riding ATVs, etc. on the roads.

I think the San Juan permit that allows them (a private company) to place the huts on public land says customers can’t drive to the huts themselves (typically located a few hundred yards from FS roads). So no, you can’t drive to the hut but I suppose you could find a place to park nearby. I wouldn’t recommend it though – if you’re paying for the hut experience, why not rely on what is supplied? Now if I were riding Kokopelli’s or even the Great Divide Trail I would certainly be inclined to sag it…

The outfitter I mentioned in my comment to element22’s post claims to have the permits necessary to operate a paid service on NF land (though again there isn’t any regulation against private individuals organizing and making this trip on their own).

Yeah, logistics always stress me out unless I have them figured out well in advance. Sounds like just getting this whole thing to happen was a feat in and of itself, not to mention all of the riding!

Hi Trek – just out of curiosity, what types of rates did you get for short-term stays at the DMR? Did you have to rent a condo? Thanks!

We stayed in a 3 bedroom condo at DMR and although I didn’t book it myself, I think I remember Nate saying it was around $120 for one night. The place was huge, even for 4 guys and tons of gear.