Few riders make it through a season without giving the dirt a proper kiss, wherein we are abruptly reminded why we wear or should wear pads and helmets. Body protection manufacturers like G-Form work hard to create gear that meets all of the highest safety standards, and there are plenty of great options available to keep us safe.

We recently asked our readers and industry contacts for their stories of rides that were saved by protective gear, or days when they wished they had been wearing pads. Some of the following stories might encourage you to find a new pair of pads before your next descent.

The stories below were edited for clarity and brevity.

As a mountain bike instructor, I see a lot of women crash while demoing our G-Form pads. Many of them had never worn pads before but they said they’re glad they did when they fell. I see how much more confidence it brings ladies when trying new things and pushing themselves out of their comfort zones.

Personally I haven’t been much of a pad wearer until getting knee surgery due to a life-long ordeal in my knee. Shortly after surgery I got stuck in my clips and tipped over hard right onto my knee. It made me start wearing my kneepads more often.

I tend to wear them most often when I know I’ll be downhilling and going fast more than I’ll be pedaling. I also wear them when I know the trails are super technical to be extra safe and protected.

I slit open my knee and should’ve gotten stitches since you could see my ligaments, but I had a race I had traveled to so I didn’t stitch it up. I ran the risk of joint and bone infection, which was very stupid. Since then I have worn knee pads. They definitely take a toll and hold up well.

I’ve blown up my elbows so many times I’ve ended up in the hospital to have them drained because I don’t like how they look or feel.

I do wear shin pads because of how many scars I’ve gotten from my pedals, my legs are far gone but even now I can save them from worse! I’ve even wrapped and taped my shins in magazines when I was a university student until I decided to finally buy some real shin pads. They are the pads I cannot ride without.

This spring I had an “off” in a local bike park. I washed the front wheel on the approach to a small but fairly high-speed double. I swapped on the takeoff and cased the first double sideways causing me to high-side myself over the second double landing hard on very gravelly soil. I expected my knees and elbows to be shredded, but my G-Form pads did their job and I really didn’t have any ill effects on the protected parts.

[My husband and I] were at the Yeti Tribe a few years ago in Breckenridge. [It was the] last afternoon ride of the trip. My husband basically impaled his shin with a branch after overshooting a corner. The blood alone showed me it was serious but the real test was that he gave up the keys and had me drive our camper over back home over the pass after being doctored up. This means it was really bad because he is OCD when it comes to driving and rarely takes me up on my offer to help.

Luckily, we were with folks that had some heavy-duty first aid supplies – because they are Yeti and they often need it. Actually that was probably the only reason he probably crashed in the first place. Those guys are reckless. NF’s given. Anyway, we got back home and went to the emergency room, and he promptly ordered shin guards and pads the next day.

I had a crash that convinced me to wear knee pads more often. I was volunteering at a Take a Kid Mountain Biking Day event at a local urban trail system. I spent the morning slowly rolling through the trails making sure there were no downed kids. Since I was riding slow, I didn’t put pads on. After lunch, the jump line was too appealing. On my third or fourth run, things went sideways. I took a four corner fall — both elbows and knees. I think I alone used more first-aid supplies than the 100+ kids that were there that day. From then on, no pad, no rad.

After enjoying a quick session on some fairly tame local downhill trails, I went for one last run before heading home to get ready for a business appointment. On that last run, I washed out, and my right shin slid across the bare outer chainring of my 3x drivetrain. I got up, saw the skin hanging off my shin, strapped a cloth around it, and started hobbling down the trail calling for help. Two other bikers happened to be there, and they helped me down the trail to the very conveniently-placed urgent care next door. Fifteen stitches later, I made it to my business appointment, in full MTB regalia and with a huge bandage around my leg.

I’ve worn knee pads (with integrated shin guards) ever since.

I’m a healthy guy. I feel I’m competent. I know how to ride a bike.

But, I crashed on a dumb suburban gravel walking path. I slashed my knee open, exposing the unknown white stuff below. I rushed to the emergency room, where they brutally dredged gravel from the inside of my knee, then stitched it back together.

Then, after going home and sitting in bed for three days, holding my throbbing leg as straight as a club, I developed chest pains. It felt like a bruised rib — but on the inside. The pain would swell up when I lay down until it was too much. After I sat up, it mostly went away. I tried to sleep that night, but it hurt to breathe lying on my back. I positioned myself up on my side and balanced like a propped-up log. Then I sat up in bed and Googled “chest pain hurts lying down.”

Pericarditis? Angina? Heart Attack?! I had a doctor’s appointment scheduled for a day later to remove the stitches. I knew as soon as I got up and told my fiancee Amber about my symptoms, she was going to make me go to the doctor immediately.

“Did you have pain in your calf?” The doctor said it might just be some bruising from the crash. Or it might be a blood clot in the lung. I had all the symptoms. So she sent me to the “Super Zoom Care” for testing.

First hospital gown of the day. The crew at Super Zoom gave me a D-dimer test to check my blood for the proteins associated with a blood clot. My test results? High as fuck.
Because I failed the D-dimer test, the next step was a CT scan, which uses about 50x the radiation of a normal x-ray to dissect your chest into cross-sections of detailed images. They shot me up with a dye called “contrast,” which gave me an odd tingly sensation from within — then slid me straight into the CT scan machine (looked just like the MRI from the week before).

My only hope was that the clot would be small and they’d let me go home. My fiancee, Amber, had arrived by then, and I tried to minimize the severity of my situation — wearing a hospital gown, with a catheter in the blood vein on my arm, getting pumped full of clear fluids in medical bags. When the doctor came back, she told me I had multiple pulmonary embolisms in both lungs — presumably remnants from a deep-vein thrombosis (blood clot) in my injured leg. She wanted me to go to the emergency room right away. Amber helped me pull on my pants and hastily tied my shoes. We left my car in the parking lot, and she drove me to Providence hospital.

Another week, another emergency room. Six days after stitching my splayed-open knee together, here I was again. The women at this emergency room seemed to do everything at 4x the speed of Zoomcare, screwing my blood catheter in, drawing blood, moving me around. I didn’t know if that was a good thing or not. They all thought it was hilarious that I got a CT scan at “Super Zoomcare.”

They wanted to keep me overnight. This is a thing that people die from. A lot of people! It was Wednesday night: time of our bike crew’s weekly pizza meetup. The gang was nice enough to get me a slice and come by my hospital room to hang out for an hour. Amber stayed fairly late, before retiring to her home and our dog Ken. I got a pretty good night’s sleep, despite the regular wake-ups, and even one blood draw in the middle of the night.

Overall, it was pretty reasonable. I read a book the next day, ate some cafeteria food, fretted as the old man in my neighboring room yelled repeatedly for help, then shook my head when I realized he was just complaining about his food and apparently has a habit of this. They let me out at 1pm, and I was off on my merry way.

Except for the blood thinners. When you have blood clots in your lungs, they give you anticoagulants to make sure the clots don’t grow. The only problem is that then you’re a low-key hemophiliac for three months. I’m gonna have to take it REAL easy for a couple of months, sadly. No mountain biking, no fast road biking, and absolutely no crashing of any kind. My knee is helping slow me down for now. So far, the only exercise I can do is hiking with trekking poles (“adventure crutches”). But I hope to move on to fancy walking, big hikes, running, and even some very safe road biking soon. For now, I’m grateful to be alive.

If there’s one lesson I’ve learned — besides “life is precious” — it’s this:
wear your freekin’ knee pads!

I smashed into the other rider and my wrist ended up sideways but that didn’t even hurt compared to my dislocated and fractured elbow! 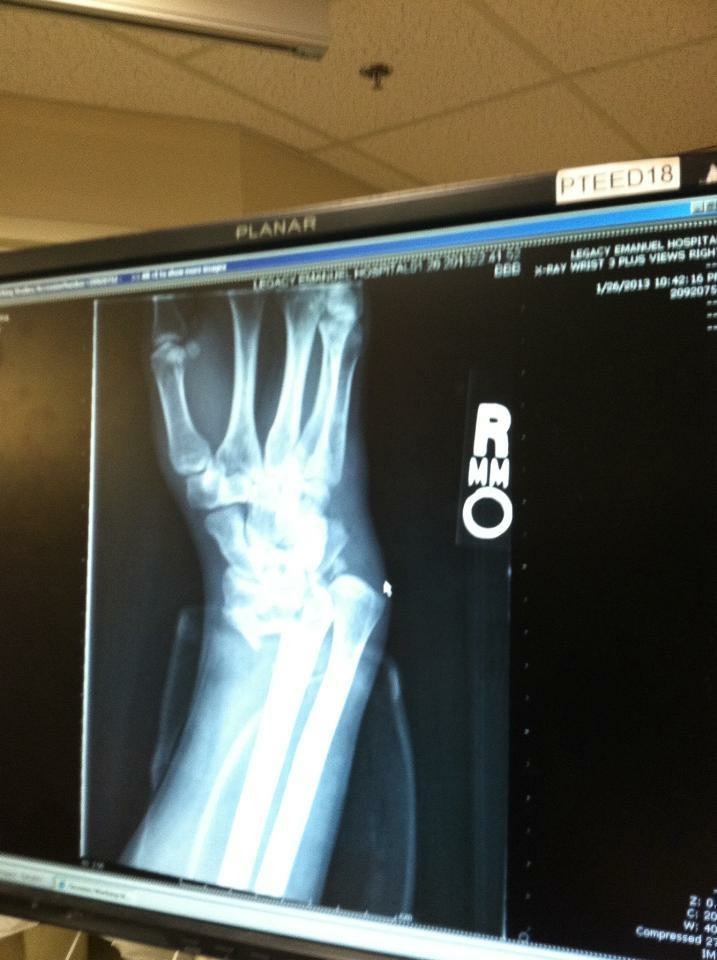 If I hadn’t been wearing elbow pads my entire elbow would’ve been shattered. A lot of young people think it’s cool to not wear elbow pads but I have to say that was the most excruciating pain I’ve ever had in my life. The ulnar nerve runs down the back of your elbow and when you agitate that thing, ay Chihuahua! I got up to walk away from the crease, took five steps, and then said “catch me” because I started to faint. I had to go to the hospital in an ambulance. I’m a huge fan of elbow pads even if it’s not “cool.” 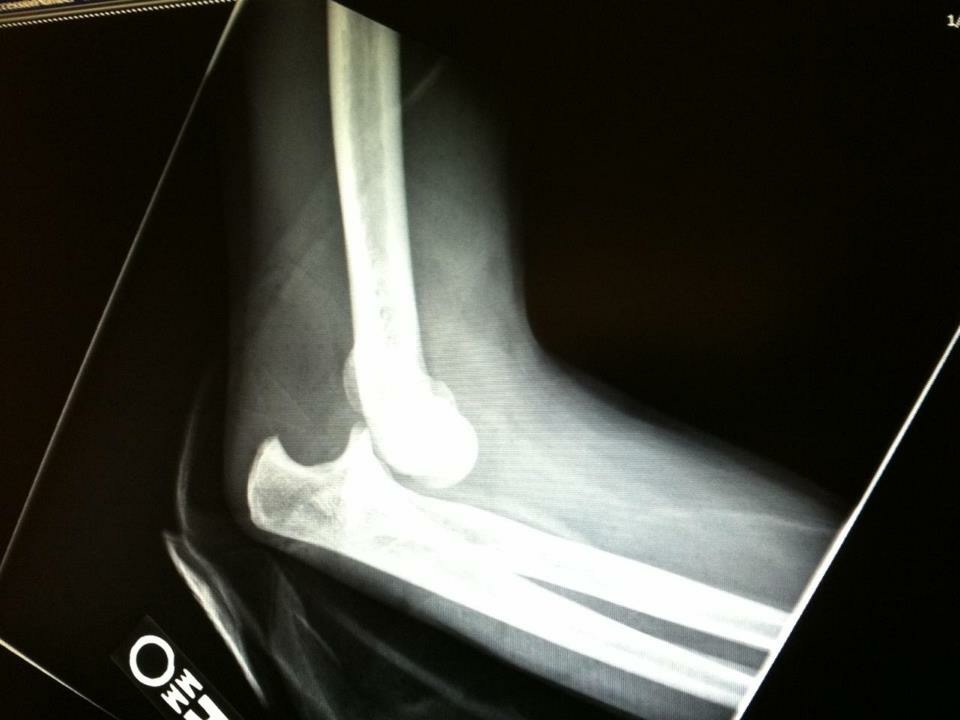 How has protective gear saved your skin? Share a story in the comments.

Find your new set of mountain bike pads at G-Form.com. Singletracks readers can save 15% off non-sale items (US only) with coupon code singletracks15, this offer expires October 31, 2019.

Gear
SHRED Enters Mountain Bike Helmet Market with Cool Tech
Gear
Protect Yourself Before You Wreck Yourself: New Body Armor Choices...
Training
Ned Overend Shares His Tips for Staying Fit, Fast, and...
Opinion
Over a Beer: Giving Up Isn't an Option - On...