Surprisingly, one of the biggest overarching stories from Interbike this year was the push from a wide variety of companies to introduce e-assist mountain bikes. I predict that introduction of e-assist “mountain bikes” will soon introduce a number of trail access issues. 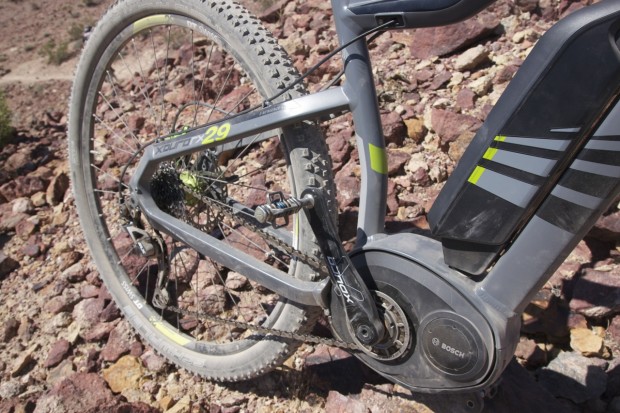 For more information on e-assist mountain bikes, you can check out my review of the Kreidler Vitality Dice 29er and Jeff’s review of the Haibike XDuroRX29.

In my opinion, the single biggest set of problems that will come along with this new push for e-assist mountain bikes are trail access issues. Currently, gaining and maintaining trail access with solely human-powered mountain bikes accessing the trails is difficult enough. Just ask the mountain bikers in Bozeman about the Gallatin Crest Trail, arguably the best trail in the state of Montana, that was closed to mountain bikes several years ago.

In other areas of the nation, bikers are striving to gain legal access to trails, such as the Pacific Crest Trail, that have historically been closed to mountain bikes. Many equestrians and hikers across the nation already complain about how fast mountain bikes are. If you add a motor to the mix, which only allows riders to go faster, we’re looking at a significant increase in disgruntled trail users, as well as potential accidents out on the trail.

See Also: Why Ebikes Are the Spawn of Satan (mostly)

While we all know that mountain bikes don’t cause nearly as much trail damage as a horse and barely more than a hiker, other users and elected officials don’t necessarily buy that. Adding a motor and additional bike weight only increases the impact that mountain bikes have on trails, and it only adds fuel to the fire kindled by people who are already opposing mountain bike trail access.

While some people might argue that the limiter makes a difference by not helping riders go any faster than 20mph, I think that’s a moot point. Not only does the motor dramatically increase uphill speed, even with a 20mph cap, but how long do you think it’s going to take some tech-savvy bike mechanic or do-it-yourselfer to remove the limiter altogether? I can tell you what, if I owned one of these bikes, I’m pretty sure that’s the first modification I’d make!

There are several major issues with the current technology that I think are prohibitive to the use of these bikes on singletrack trails. First and foremost, these bikes are heavy. All of the e-assist bikes we’ve seen have weighed about 50 pounds, and I found that I had to have at least a 30% power boost from the motor just to compensate for the added weight of the electric motor and battery.

While the HUD does provide an estimated distance range at current power output, let’s walk through a quick scenario, shall we? A person in rather poor physical condition is out riding their e-assist bike. Consequently, they’re using a lot of energy from the motor to compensate for their lack of physical fitness (and the weight of the bike), and they climb up to the top of a high mountain ridge.

The sun will be setting soon, so the rider tries to follow their map. They make a turn in an attempt to complete their loop, but they take the wrong turn. Instead of dropping back down the front side of the ridge, they drop down the opposite side, into a remote, roadless area. As you’d imagine, the downhill rush is so much fun, that they arrive at the bottom of the mountain ecstatic. But eventually they realize their grave error, and try to make it back up the mountain. Thanks to all the effort it took to make it up to the top of the mountain the first time, the electric battery quickly runs out of juice on the second ascent, and they’re stranded. Instead of trying to ride a normal 25-pound bike back up the mountain, they are forced to push a 50-pound brick. And this “rider” is already not in very good shape… that’s why they’re riding an e-assist bike in the first place.

Think the above hypothetical scenario isn’t likely? Think again: stuff like this happens all the time (Jim, I’m looking at you!), but what makes the above scenario even worse is the tank-of-a-bike and the poor physical condition of the rider. This situation quickly turned from an easy ride-in-the-woods to a life-and-death survival scenario that the e-bike rider is poorly equipped to handle

But Won’t it Open Up the Sport to More People?

Will it make our lobbying power better in DC? If the perpetually-shrinking access of motorized ORV access around the country is any indication, I think not. Since very few trails collect use fees, that’s not a viable source of benefit, either. And even if an increase of e-bike riders translates to an increase in trail maintenance volunteers, the trail access issues noted above would seem to indicate that putting new trails in the ground would be extremely challenging. Thus, we could easily be looking at an increase in trail traffic, with no additional room for those new trail users to ride.

We posted about e-bikes on the Singletracks Facebook Page during Interbike, and as you can imagine, there was a ton of lash back. One of my favorite comments on that thread came from a girl named Leah: “If I saw a guy on my trails with that, I would assume he didn’t have what it takes to get up in other aspects of physical activity either.” Enough said.

This is just one side of the debate. Be sure to read Jeff’s article, arguing for e-assist mountain bikes on mountain bike trails.

Progression
Have you Ever Attended an In-Person MTB Skills Clinic?
Sponsored
Mountain Vibes Only with the Club Ride Sun Valley Collection
Gear
How Do Carbon Mountain Bike Frames Break? Shawn Small of...
Community
You Don't Have to Love Suffering to Mountain Bike, But...
Subscribe
Login
Please login to comment
13 Comments
Most Voted
Newest Oldest
Inline Feedbacks
View all comments

Jeff won this debate with flying colors. But I’m on your side Greg. Get on an ATV (where allowed) if you want to cruise through the woods IMO..

Yeah, or a dirt bike.

Thanks for the sympathy vote, haha!

We’ll see what your attitude is when you hit 55 and want to continue this wonderful sport.

@triton189, lol that’s a total copout. I’ve ridden with tons of guys 55 and older that are WAY faster than I am, and are double my age. There are no excuses.

I’m on Greg’s side too, but I also think Greg won the debate due to the quote he so devastatingly finished his argument with. =) CUNNING AND CLASSIC.

I disagree. I think Jeff wrote a more convincing article, but I think Greg’s concise article hits the nail on the head. Most people, hikers or bikers, don’t want them on the trail. People with true disabilities won’t be able to ride these things anyway…and I have ridden with several amputees who are amazing on a non-motorized mountain bike (still blows me away…how do you ride a tough trail like Apex [so well] with a prosthetic arm attached to your bars?!). Just sayin’…

In Greg’s defense, I did suggest he cut down his article and eliminate one of the main points many of the commenters are making. The argument is that MTB is about fitness (or pain, or human-power) and that’s why e-bikes shouldn’t be on the trail. To me it’s a tough argument to make–we all ride for different reasons–so for that reason I didn’t think it fit.

I told Greg that for me, MTB is about riding on two wheels but I have no problem sharing the trail with mountain unicycles. To each his own–unless it negatively impacts others.

I agree. Great points made. The line needs to be drawn somewhere though. I am all for progress in MTB technology, but bikes with motors takes away from the true essence of mountain biking, especially if they are hurting the creation and acceptance of more trails. I understand we don’t want to discriminate against anyone who loves mountain biking and I don’t mean to be insensitive, but if you can’t ride a mountain bike without motor assistance, then mountain biking might not be for you or need to stick to easier trails. Part of mountain biking is pushing you physical limits, mental limits, and challenging yourself; not flipping on the motor switch when the climb gets tough.

In Jim’s defense I was running map man that day and I made the fatal turn that lead us about 15 miles away from where we were supposed to go. Luckily we had a road at the end of our ride, a pizza place, and a cab to pick us up. Otherwise we were looking at about a 40 mile road ride back to town in the dark/cold. I could easily see someone getting in over their heads with a bike like this and panicking.

I am with Greg on this one. Not saying e-bikes don’t have a place, i just don’t see them being accepted on most biking or mult-use trails. The Forest Service is pretty adamant about no motorized vehicles on their trails and I really don’t see that changing. I feel lucky they let us ride as the old signs said no vehicle use – a matter of interpretation that could have gone against us. These e-thingies would be fun on your back 40 and I would think anywhere they allow ATVs.

I cant wait to share the trails with the Eric Cartmans of the world!

In case anyone is interested, here’s my complete opinion on ebikes:
http://www.singletracks.com/blog/mtb-columns/over-a-beer-why-ebikes-are-the-spawn-of-satan-mostly/