In our household there are two seasons: bike season and ski season.  Rarely do they overlap.  Once ski season begins, the bikes take a long winter nap.  Bike shorts get stored away and ski pants and socks come out.  The back of the car is no longer filled with bike helmets and scattered pairs of gloves, but ski helmets and poles. Bike legs take a backseat and ski legs take over… or try to.  The calendar gets filled with weird codes in the corner like, “JN 2,” meaning I’ve gotten two ski days in.  Yes, we keep track.

Our little resort, Powderhorn, opened early this year, on Saturday Dec. 7th.  It was a cold, snowy opening day.  The winding road up to the resort had one little clear path; everything else was snowpacked.  A line of us snaked up the highway and through the little town of Mesa, Colorado.  As we turned into the resort, I noticed snow blowing across the road.  “Oh no,” I thought, “it’s windy.”  It was windy and about 5 degrees.  FIVE. But no matter!  It was the first day of ski season.  I am a skier.  This is what we do.

So I trudged to the lift and hopped on.  Hood up, gaiter on, mittens doing their best to keep my hands from freezing… we slowly, slowly, slowly creaked to the top.  There was fresh snow covering the slopes.  I couldn’t wait to fling myself down them!  As I approached the top of the lift, the wind was blowing so hard that it made getting off difficult.  I leaned into it, fighting to pick up some speed heading towards my first run of the day.

Three minutes into the run I stopped again.  The burn in my thighs was causing me to actually grimace under my gaiter.  Where are my ski legs????  You’d think months and months of biking would have strengthened all the muscles in my legs.  That didn’t seem to be the case.

I must’ve stopped six times on that run… and trust me, the runs at Powderhorn aren’t that long!  Each time I’d ski as long as I could, my form getting worse as the burning increased.  I’d stop and let out a yell, resting briefly.  I finally made it to the bottom and  caught up with some friends; we headed up for a second run.  This time I only had to stop four times.  Ok, we’re warming up.  The legs are there.  Somewhere.

Fortified by beer on our next lift ride, we cruised over to the West End.  The lift there is more sheltered, so we figured we wouldn’t be as cold… and yet frost was forming on my friend’s face. 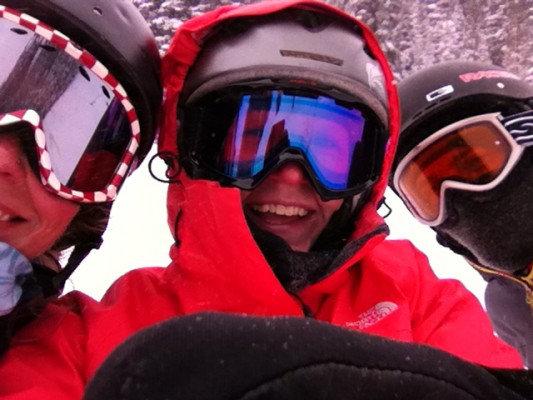 It was so cold my friend Brian looked like a ninja.

It was on that fourth lift ride that I realized I couldn’t feel my toes.  Toes, they’re fairly important appendages… so we decided it was time for a break.  We sped down the cat track to a steep black run and skied back to the base as fast as we dared.  Icy fingers of wind and snow slapped at my face as I skidded to a stop near the lodge.

That break ended up being a permanent one for the day.  The wind grew worse as we sat inside scarfing down burgers and beer.  It was harsh weather for opening day, and I heard others passing our table say, “That’s all I can take man.  Four runs is enough.” Sometimes even opening day just isn’t worth the pain.

It’s ok, though.  Not all ski days are like that.  I was back up there the next Saturday and got this kind of day instead: 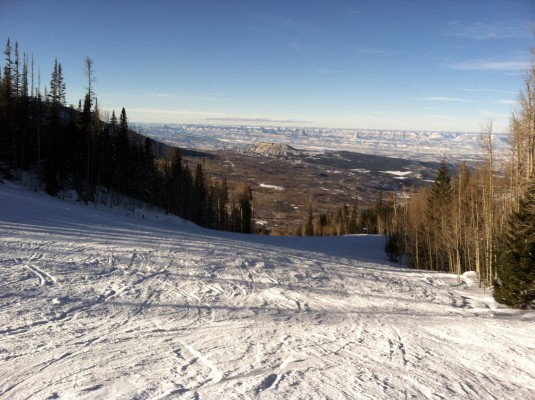 Bluebird skies and the Grand Valley as seen from Bill’s Run at Powderhorn.

Here’s to ski season! I think it’s time to get out and do my snow dance for Ullr.

Your Turn: Do you ski or snowboard during the winter?

Gear
These MTB Deals are Fire, including 40% off Patagonia Dirt...
Gear
The Maxxis Minion DHF Tire is Still the One to...
Gear
Mountain Bike Tire Repair Tips: From Emergency to Semi-Permanent
Gear
Never Underestimate the Power of a Good Zip-tie
Subscribe
Login
Please login to comment
10 Comments
Most Voted
Newest Oldest
Inline Feedbacks
View all comments

Snowboard, as a kid I watched the x games snowboarding always look so cool so that is what I decided to do

I started skiing in the 1990s and I love it. Well, not as much as mountain biking–the cold weather and bulky equipment kinda get on my nerves after a while. Still, I would like to go at least once a year!

Often in the winter down here in the valley there’s an inversion…the cold air gets trapped under warm air and nothing can escape. So the valley fills with smog and it’s just cold and gross for weeks on end…that’s when the ski resort really becomes necessary. You can go up there and escape the 5 degree temps and clouds for sun and 20 degree days. It’s blissful then…and then you drive back down and see the haze enveloping you…ah, winter in the valley…

No skiing down here in south Texas. Biking all year round.

I ski all winter. I like it almost as much as mountain biking. A lot more expensive though! Spent $1500 on passes for the family for 2013/14, and that doesn’t include when we ski at other locations. In my area, mountain biking is mostly free (except for regular bike upgrades I suppose).

Ahhh, the glory of the West. Skiing at high elevations and biking at lower elevations — all in the same day! Love late fall/early winter and Spring!

I agree–it’s quite surprising how little biking seems to prepare one for skiing. They are both quad-intensive activities, aren’t they? So far, this year’s been tough–it’s getting to the point that all three of my kids will be able to ski circles around me (well, my oldest is a ski patroller at Big Sky, MT, but I should still be able to keep up with the other two)!

@ you’re right, it IS more expensive! I’d just skin up the mountain to save money but come on…you don’t get nearly as much downhill time that way 😉 If you’re like us though, and it sounds like you are, we figure this is what we are going to do for the next three-four months so usually it’s worth it…if our local resort had a high-speed of ANY KIND it for sure would be 😉

@skibum I feel your pain 😉 it’s getting better but of course with every passing dry day the moguls get bigger…and once we hit the groomers again everyone just flies by! SIGH.

So stoked to FINALLY be skiing powder again this year! Oh how I’ve missed it! Still, I can’t fully give up MTBing for 3-4 months straight. I’ve been skiing on the weekends, and riding a couple of times during the week to get my singletrack fix 😀

Good for you Greg! I thought about biking yesterday but of course now it’s getting a little warmer down here and things are getting soupy. Blech!

It’s the same at our house. Bike / SUP season and Snowboard / ski season. I love doing the different things in the right seasons. It makes for great variety. But I got a unicycle for Christmas. So, I’ve got a hankering to try it out.