As we head into 2015 SRAM and RockShox continue to push the technology envelope with a new series of product releases. Some of the highlights include improved frame and tire clearance for 1x systems, two new hub sizes (one for the front and one for the rear), stiffer wheels, and corresponding forks optimized for 27.5+. Read on for a break down of these technological changes.

SRAM has essentially tweaked the alignment of their proven 1x systems to provide additional frame clearance so that frame builders can give us better frame geometry, wider chainstays with more clearance, and fit larger tires than ever before. SRAM allows all of this simply by sliding the chainring outward, but they importantly do not have to increase the Q factor in order to make that change. As you’re already probably guessing, the cassette needs to move outward as well to stay in line with the chainring, but since SRAM is also rolling out a new wider, stiffer hub size, both of these items work in tandem. Check out the diagram below for a visual: 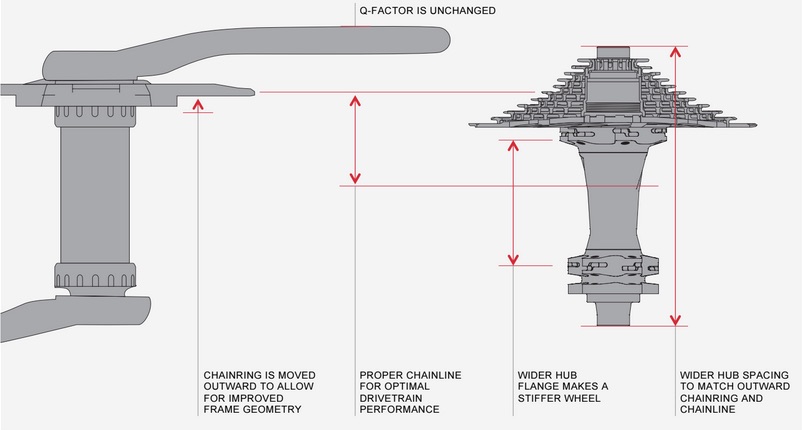 The Boost 148 components are available in XX1 and X1 component levels.

In order for the components above to work, they must be paired with the new 148mm-wide hubs. The above components will not work on their own.

According to SRAM, this is much more than just a new hub standard, however. SRAM claims:

Much more than a new, wider axle standard, the Boost system uses a rear hub that is 6mm wider than a 142mm design—each flange is 3mm farther from center. The greater flange offset allows a stronger spoke-bracing angle resulting in a stiffer wheel. Given the same rim and spoke spec, a 29″ Boost wheel will have the same stiffness as a 27.5″ wheel built on a 142mm hub.

This is actually a pretty big deal. While some have cried the death of the 29er as well as the 26er at the feet of the all-mighty 27.5, advancements keep rolling out to make 29″ wheels better and better. I’ve personally ridden many 27.5″ and 29″ bikes back-to-back, and the handling differences and ride characteristics are remarkable. I doubt we’ll see either wheel size disappearing anytime soon since they both provide such different ride qualities, and apparently SRAM doesn’t think so, either. So, they’re continuing to make both wheels better. Good on you, SRAM. 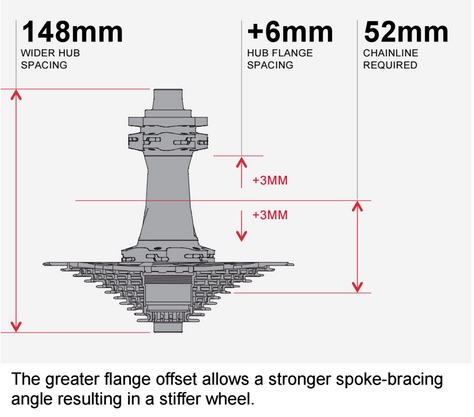 While many component changes can be made without affecting the frame, rear axle/hub size isn’t one of them. In order to use this new, tweaked drivetrain, you’ll need a whole new frame. Since the idea is to allow frame builders more room near the bottom bracket and chainstays, I suppose this isn’t too crazy of a concept, but there could be some growing pains during the switchover with older wheelsets not compatible to newer frames, and vice versa.

Thankfully, the new Boost system will use a 110mmx15mm front axle/hub standard, which is the same one that the new Fox Float 34 27.5+-specific fork will be using. At least, if you have a 27.5+ wheel, you’ll be able to switch it between fork manufacturers without a problem.

In order to accommodate this new axle/hub size, key forks are being updated accordingly. And of course, RockShox is rolling out a new graphics package along with the update, and is dubbing the change “MY16.” 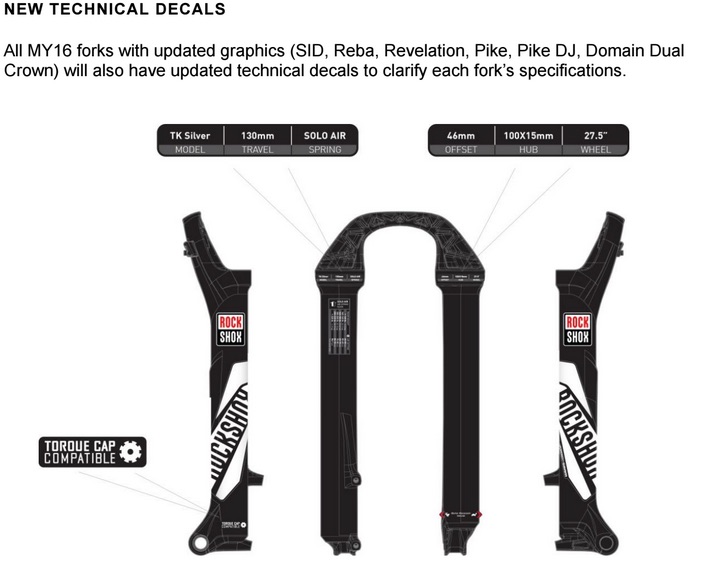 The big take away from these fork updates is the new 110x15mm axle/hub size in the updated My16 SID, Reba, and Pike forks. And most fascinating of all, RockShox is claiming that “all 29″ forks with Boost compatibility (read: 110x15mm axle/hub size) also fit 27.5″ Plus wheels (17.5″x3.0 tires).” This is an interesting move on RockShox’s part as it keeps with the theme that we’ve been hearing for some time about 27.5+ being an upgrade for current 29ers. This is, however, in contrast to Fox’s move to provide a 27.5+-specific fork. So who’ll win out: the conversion camp or the component-specific camp? Only time will tell.

All of the newly-redesigned forks are also “Torque Cap compatible.” The new Torque Cap is unique to RockShox… check out their description below to get an idea of what this all means: 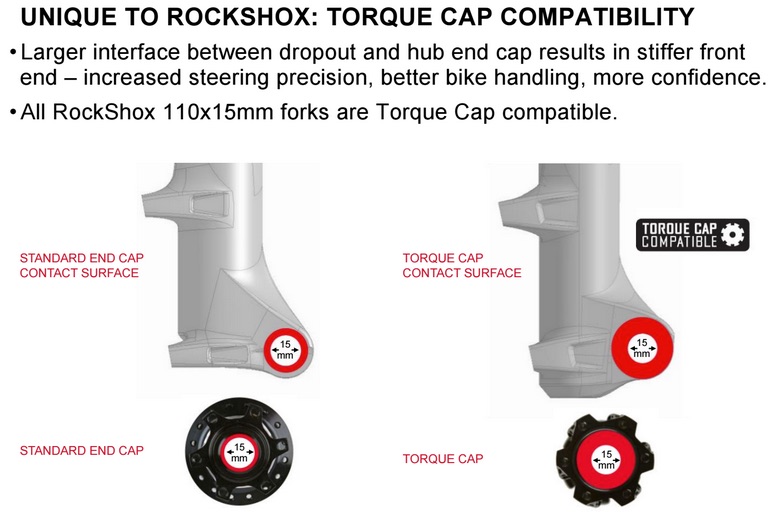 In the end, I think we need to take a long-term view of these changes. In the short term it’s going to mean a lot of changes in hubs, wheels, and frames, along with outdated bikes and components, but in the long run, all of these changes will continue to give us better and more capable mountain bikes than ever before.

Durango Bike Co is ready to put this stuff on their new Blackjack. Ready to go!

Just hit publish on this article literally about 90 seconds ago 🙂
http://www.singletracks.com/blog/mtb-reviews/test-ride-review-durango-bike-company-blackjack-29er/

Rode the Moonshine at Outerbike last week. Didn’t get a chance to ride the Blackjack yet, but checked it out. It’s ready to go with 27.5+ to 29″ tires. Trying to convince the wife to head up to the great white north… Whistler, BC for Outerbike there. If I do, I will definitely get a ride on the Blackjack.

Great idea, but a little obvious. I thought about using 12 x150 through axle hub several years ago specifically to get the wheel stiffness. SRAM’s idea to match the chain-line without affecting the Q-factor is clever, effective and should cause little change in manufacturing cost. It’s good to see a complete set of components designed to work together to make the most of the advantage. As for a new standard; you can’t run forward while looking backward. There are plenty of existing standard parts for those who don’t need or want the new capabilities SRAM is now making available.

You don’t necessarily need a new frame if you have a dual suspension, just a new rear triangle. Often available for a small fraction of a new frame price.