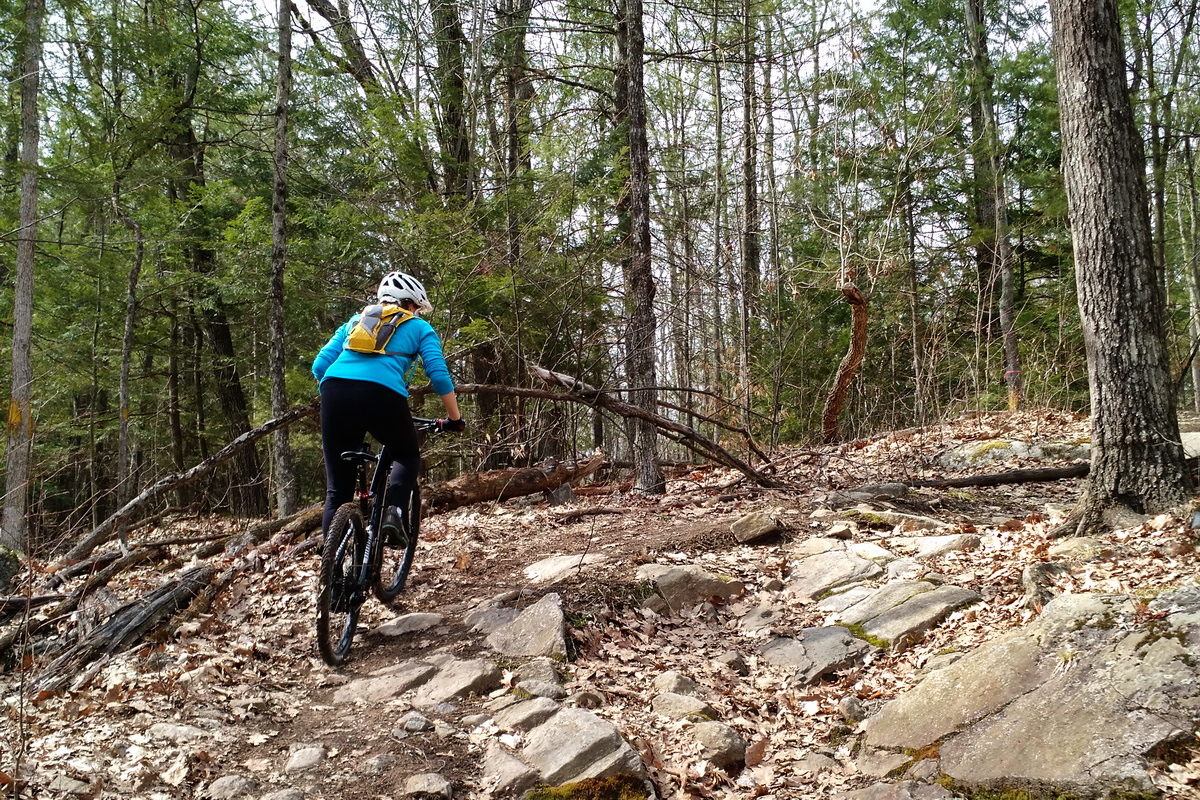 The closer we got, the more jittery I felt. I recognized that rock drop, pinched between two trees. And that off-camber stretch of trail curving around the wooded hillside. And if I was seeing these features, then the one I was dreading most was just ahead. My heart sped up and I blew out a long breath as I tried to focus on other things, like the satisfying ache in my pumping legs, or the cicadas buzzing in the still, August heat. It worked, for about thirty seconds. And then I came around a curve and saw it, and all my forced calm left me.

The dip in the trail. The jagged rocks piercing the muddy streambed. The uneven stones piled haphazardly in a line across the ditch.

But let me backtrack a bit. Before you judge me for my fear of a rock bridge, let me tell you why, on this late summer day, I was freaking out about this particular obstacle. And let me tell you why I think that as mountain bikers, our crash stories are an important part of who we are. Not for the battle scars or bragging rights, but for the grit and discipline they force us to learn.

Rewind three months earlier to May. In upstate New York, the mountain biking season was just beginning to pick up as the weather warmed and the snow disappeared from all but the highest peaks and deepest, shadowed ravines. I was riding a trail known as “Backstretch” at the Saratoga Mountain Bike Association (SMBA) trail network, and its giant, chunky rocks reminded me just how out of shape I was after a lazy winter. Still, I was so happy to be on my bike in the woods that I didn’t really care. I barreled through rock gardens and jostled across roots with less finesse than I like to think I usually have while riding, and maybe that contributed to the impending disaster. Or maybe the rock bridge was a little slippery with the melting snow and mud. Or maybe it was just plain bad luck.

For whatever reason, instead of gliding across the ditch on those rocks like I had a million times before, I made it halfway and went flying. The details get a little fuzzy at this point–I know my husband came back faster than I’d ever seen him ride at the sound of my crash and the cries that followed. And I know I hollered at him when he picked my bike off of me and threw it aside. Somehow, and much more gently than he’d tossed the bike, he got me out of the ditch and onto the bridge. Only then did I become aware of the sharp, throbbing ache that was my entire right leg. It was badly cut up and already starting to swell. As the Urgent Care doctor told me later, I was lucky I hadn’t broken any bones. 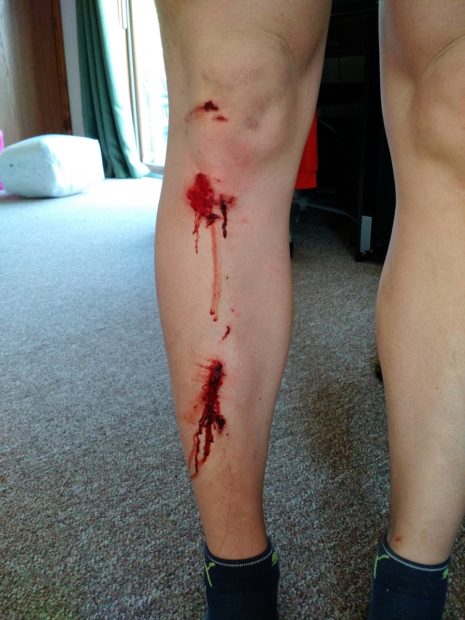 But I think the worst part about that crash wasn’t the physical injuries, although they hurt like mad and took forever to heal. The worst part, by far, was how irrationally afraid I became of that trail.

Getting back on the bike wasn’t difficult. I even managed to ride a good part of the four miles back to the trailhead that day, blood dripping down my leg the whole way. After that, it didn’t take long for me to get back into my multiple-rides-per-week groove, although the rides were much tamer for a while. I rode skinnies, cleared fallen logs, and fought my way through stretches of trail that were nothing but mud and roots. I tackled the rocks at the SMBA trails again multiple times that summer, but not once did I return to Backstretch. I felt a visceral, self-preservation instinct that was stronger than all my logic and determination, and it kept me away from that trail all summer long. 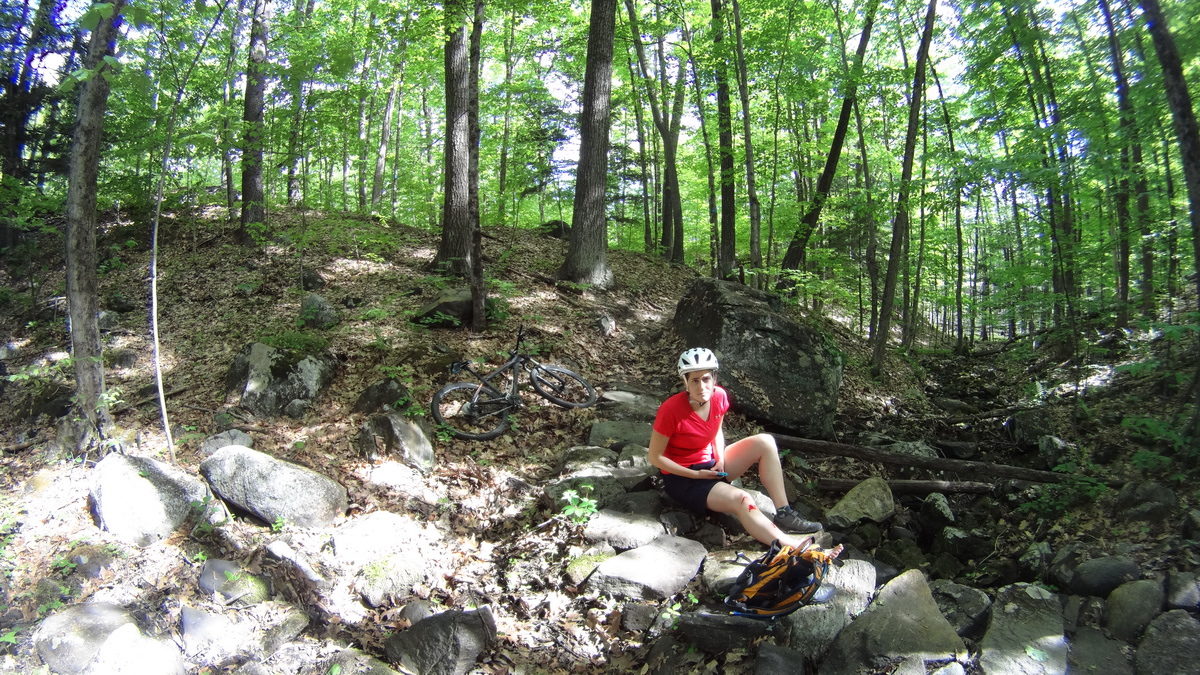 I made excuses, of course. As the name implies, Backstretch is one of the farther rides at SMBA, and it was way too easy to tell myself that I didn’t have time to make it all the way there and back.

But pulling up to the trailhead on that August afternoon, I knew it was now or never. It was almost the end of the summer; soon fall would arrive, and with it a whole new host of excuses in the form of slippery fallen leaves and shortened daylight hours. If I was ever to get a rematch with this rock bridge, it had to be now. Otherwise, the fear of it would continue to grow in my mind until that fear was nearly impossible to overcome.

I did a quick warm-up lap on some other trails before heading to Backstretch. Once that bridge came into view, I panicked… but I didn’t stop riding. Every muscle was tensed up tighter than the spokes in my wheels. My front wheel hit the first rock… then the second… then I was completely on the bridge… then just my back wheel… then nothing. I was on hard-packed, relatively smooth dirt.

I had done it.

And even though that story, “I rode over a rock bridge,” doesn’t get me nearly as many stares as the bloody tale of crashing does, it’s the one I prefer to tell. It reminds me of the way I felt–strong and powerful and unstoppable–when I cleared the obstacle that previously sent me sprawling.

And it also reminds me that for that one time I crashed, there are a million other times I didn’t, when I chose to ride a feature instead of skirting around it. It’s a tangible illustration of not only how I ride my bike, but of how I want to live my life: I want to choose the hard thing instead of the easy thing. As mountain bikers, this is part of who we are. We take the challenge. We push ourselves. We do the hard thing. And if we can all carry that over into other areas of our life, I think our world will be better for it.

So keep riding, fellow bikers. Keep riding… keep crashing… and keep getting back up again.

Kate Dulmes
I'm a Midwest transplant to upstate New York, and as far as I'm concerned, the best way to spend a day is pedaling along through these beautiful northeast mountains.

Good stuff. Your last sentence (and me): Keep riding (check)…. keep crashing (CHECK)… and keep getting back up again (check!).

Kate, we could be “shin wound brother and sister”. Without going into the long story, I slipped a pedal on a really steep trail and a peg of my flat pedals dug dip into the front of my shin and proceeded to scour up my shin about an inch and half. It definitely needed stitched up, but I was returning “home” to Mongolia the next day and didn’t want to get held up medically. So I decided not to go to the doctor. It gave me fits for five weeks before it finally healed up enough to where I wasn’t concerned about it (and infection). Lesson learned. The one thing I did do right was carrying a good first aid kit on the ride (as I do on every ride). I was able to clean out the gash quite well on the trail, control the bleeding putting a couple of large band-aids on it, and ride on for another hour and half.

There is a product called Blood Stop which I carry for big cuts, but have never used it, yet. A few wraps of Gorilla Tape around a Tylenol bottle. The tape could be used to make a splint using a tree limb. It can also be used on the inside of tire to seal a side wall cut, it works for a short while. Super Glue to use as stitches to close a minor wound. And always your cell phone.

Yeah, how we deal is everything.

Last July, I crashed riding on some steep slickrock on one of my favorite loop rides. I did two rotations OTB and shattered my patella. My wife was with me and we were about seven miles from the house, but only a mile from the nearest trailhead – we decided that was where we’d go. The trail is mostly downhill, flowey, single track but there are some interesting technical sections and some short climbs. I put the seat down a little, my wife put the bike under me, I clipped in and pedaled with my good leg while dragging the busted one along beside me. When I couldn’t ride I hopped along using my bike like a walker. When I couldn’t do that, I put an arm around my wife and hopped next to her. It took almost an hour and a half to get out and the ambulance was waiting.

I got through the ski season and a whole lotta PT and rehab and now, coincident to your article, I am getting back on the bike tomorrow. We’ll see how I deal!

I just had a crash at my 1st XC race this week on lap 2… after dropping my chain 3 times! . Nice gash on the knee and a bunch of swelling on my knee a few days out now. Kept riding and finished the race. And can’t wait to do it again.
Great reading your story and relating. I have the same fears on a couple rides I’ve done and look forward to conquering them as you did!