A man biking at Halpatiokee Regional Park in Stuart, Florida was attacked by an alligator after falling off the trail and into the water below. The Martin County Sheriff’s Office provided the following account on Facebook.

A bicyclist suffered serious injuries after being severely bitten by a large alligator while on trail ride. The man was riding his bike on a trail at Halpatiokee Park in Stuart around 11:00am, when he lost control of his bike and fell into a body of water about six feet down an embankment. The female gator, which measured about 9-feet, grabbed ahold of the man severely injuring him. The cyclist was able to break free then crawl to an area where he was assisted by a bystander. Martin County Fire Rescue, the Martin County Sheriff’s Office and Florida Fish and Wildlife Officers rendered aid and secured the scene, then drove the bite victim more than a mile to the park area, where a medical helicopter crew was awaiting. Trapper John Davidson was able to locate and trap the gator shortly after the incident. FWC Officers are in charge of the investigation.

According to local news coverage, the victim was an accomplished rider who simply lost traction going into a turn. While the identity of the male victim is unknown, WPTV reports he received serious injuries from bites to his upper thigh.

The Airborne MTB club says the Halpat River Loop is closed currently until further notice. This story will be updated with additional details if they become available.

Culture
Update: Search for Bear that Killed Mountain Biker Called Off...
Culture
Cougar Attack in Washington Kills One Mountain Biker and Injures...
Trails
Grizzly Bear Kills Woman on Bikepacking Trip in Montana
Community
What to Expect for Mountain Biking at the Tokyo 2020/(1)...

Gear
Best Mountain Bike Gifts Under $50
Progression
How to Stay Strong in the Off-Season, Even if You're...
Gear
Why are Good Rain Jackets so Expensive? We had to...
Gear
13 Reliable, High-Quality Mountain Bike Products Designed to Last
Subscribe
Login
Please login to comment
2 Comments
Most Voted
Newest Oldest
Inline Feedbacks
View all comments

In Florida, if there’s water along the trail, there’s always a chance of gators. Unfortunately, it sounds like he startled the gator when he fell into the water. Serious blood left on the trail. 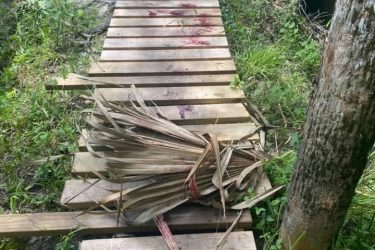 “Severely bitten”? As if a 9 foot gator is going to playfully nip at your ankles. Hope that he recovers soon and rides again.