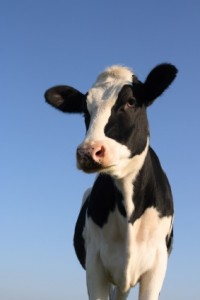 A crazy cow charged a mountain biker and stomped on her legs yesterday at the South Boulder Creek Trail in Boulder, Colorado. From the Boulder Daily Camera:

A cow charged a woman on the South Boulder Creek Trail on Monday afternoon, knocking her down, officials said.

The woman was riding her bike on the trail when she encountered the cow, and she stopped to let the animal pass, said Pete Taylor, a ranger for Boulder Open Space and Mountain Parks. The cow knocked the woman over and walked on her legs, he said.

He said the woman — whose name wasn’t released — wasnt seriously injured, and she refused medical treatment.

She didnt appear to do anything to provoke the animal, which witnesses said appeared to have an injured leg, he said. The cow had left the scene by the time rangers arrived, but hikers coming down the trail were warning others about the rogue bovine.

This is my first time ever hearing of any close cow encounters on mountain bike trails. It reminds me of riding at Joseph D. Grant County Park in San Jose through the green fields where cows always kept their distance. You would often have to open and close gates when entering wide pastures just to keep the cows in.

The lesson here is to keep your distance from any wild animals you see on the trails. I’ve seen my share of cows, deer, dogs, turkeys, snakes and other critters while riding my mountain bike. Thankfully no run ins with angry cows. If you have any stories or tips to share about your own animal encounters on the trail, feel free to leave a comment.

Sounds like a little of both or just quite a few fries short of a happy meal kind of scenario. :>)

Cool story. I do hope the rider will be ok and they find the culprit.
Here around Anchorage of course last year we had a few serious encounters between bikers & bears which is an issue that Im sure will be ongoing this year too, there doesn’t seem to be an answer yet.
Personally I have run across several moose on the trail without serious incident, most of them are just eating and as long as you don’t bother that they don’t really care what you do. I did almost hit a porcupine at about 18 MPH on a paved trail, THAT could have been a disaster! I scared it as much as it startled me.
http://www.pbase.com/takeyouphotography/image/104002420