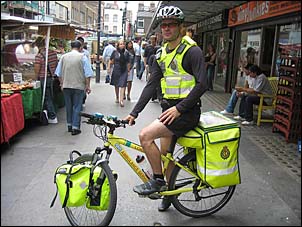 By now you’ve probably seen police officers on mountain bikes but here’s something I hadn’t heard of: mountain bike paramedics. Apparently this has been going on in the UK for quite some time (since 2000 in parts of London) and it sounds like it’s pretty effective.

Mountain bikes are being used for medical response in densely populated urban areas and allow first responders to get to patients quickly. In fact, one article I read said “often the bike-riding paramedic will get to the patient while the (911) caller is still on the phone.”

Bikes are equipped with standard first aid equipment and some not-so-standard items like mini defibrillators and high power drugs. Unlike ambulance-based crews, mountain bike paramedics can take their “vehicle” and equipment right up to the patient – often riding through shops and elevators. Of course all that equipment does “alter the dynamics of the bike” according to an official with the program so they’re always looking for paramedics with at least some cycling experience.

Besides being fun as hell to ride, mountain bikes can perform useful functions in a wide variety of settings. Who knows where we’ll see them popping up next…

You’ve got the same thing going on a lot closer to home as well, Trek7k. Many of the metro Atlanta area departments have been using bikes to respond to medical calls for years as well. In fact, keep your head on a swivel when you are in Harstfield airport because there is a whole team of us who respond via mountain bike and I hear they like to bunny hop luggage when they get the opportunity. 😉

Very cool, Where do I apply?