As if on cue two stags ran out in front, roaring as they passed us. A small reminder that we were in their territory and were privileged to be. This was definitely the road less travelled.

Torridon is arguably the Mecca and proving ground for mountain bikers in the UK.

Situated in the North West of the Scottish highlands with its peaks rising steeply to 3,500ft, the scale of the mountains, the hostile climate, and the technical  terrain make it a challenge for even the most seasoned and weathered riders. Distance is hard-won in this environment, making even shorter journeys feel like epic adventures.

Our team consisted of myself and two other professional guides. We are all used to being in these areas but rarely get the chance to come and “play” without clients. Whilst there are countless rides, some rarely ventured and others now ridden regularly, we chose to do a variation of the classic Torridon loop, taking in both the Achnashellach and Annat descents–two of the most famous in the area–as well as a few lesser-known gems hidden deep in the mountains.

October is quite late to be heading this high and into this kind of terrain for most people, as the mountains can be unforgiving, and caution is advised. Scotland is famous for its changeable weather and whilst the elevation is not that of other well-known riding destinations, it demands both bike and mountain skills to get the best from the foreboding landscape.

Before embarking on our little epic, we had originally intended on scoping out a ridge line further east, but snow and wind had sent us west in search of fairer weather.

On a previous trip to the area I encountered and had to help down other riders who were armed only with a soggy tear out map from a magazine, riding shoes that looked like disco slippers made from a recycled space shuttle, and a ride pack no bigger or better equipped than my grandma’s handbag! Unfortunately this seems to be becoming more and more common.

As dark clouds hung low in the sky we started the long climb up.  Anyone with experience of riding on the west coast will be all too familiar with water bars. For those who aren’t, these drainage ditches made from often sharp and backwards-facing rock test your climbing skills, and executing countless front and rear wheel lifts is essential to avoid flats, or worse still, damaged rims.

Our climb started with a monster water bar that seemed to say “Welcome to Torridon, hope you brought your game face, it’s going to be a long day.”

As we gained height and slowly worked our way further from civilization, the mundane thoughts, worries, and troubles of everyday life seemed to stay back on the valley floor as our minds tuned themselves into the mountains and the challenge of every pedal stroke upwards. The very rustic path began to increase in steepness, and continued to do so until eventually it, like our troubles had before, seemed to fade away.

The foothills were long behind us and all tire tracks and foot prints had disappeared as we worked our way towards a high saddle, knowing that the other side brought with it a descent nothing short of mind blowing.

Bikes up on our shoulders and tentatively negotiating the steep goat track, we could feel the temperature dropping with every small gain in height.

Just before topping out over the saddle, we hunkered down out of the wind for a well-deserved bite to eat–my chosen mountain food for the day being an entire rich fruit Christmas cake, marzipan, icing, and all. With something close to 350 calories per 100 grams along with my standard cereal bars, this would be just the job for keeping my fire burning all day.

After layering up, ready for the wind on the other side, we headed over the saddle between two peaks and were greeted by a stunning view down to the valley beneath. The roughly six-mile and 2,600 vertical-foot descent lay ahead of us. As if on cue two stags ran out in front, roaring as they passed us. A small reminder that we were in their territory and were privileged to be. This was definitely the road less travelled.

Eagerly we dropped our saddles and opened our suspension. The descent was easily split into three distinct sections–the top was a burly, rock rubblefest with drops and channels through bedrock that meant committing and letting off the brakes, to be fired out into sections of small, loose stones and baby-head-sized boulders. Once you had dialed yourself into it, the feeling of riding this roller-coaster of rock in one of the most dramatic locations on the planet was completely elating.

The trail then turned into a long, flowing descent which urged us to pump the bike and drift through every loose and winding turn.  We slowed and regrouped, and as we plunged into the final section we were given a nod by three stalkers hidden in the rocks, spotting the deer high above. With just three days left of shooting season, I quietly hoped that the stags who welcomed us to the top would evade the hunting group.

Easily the burliest we had ridden so far, the final section steeply dropped away before us. Slabs of bedrock led into tight corners and channels of wet boulders that meant any lack of respect for the trail would surely be punished. As we let our bikes swoop down the slabs and skip through the rock gardens, hanging on and working hard to keep upright for what seemed like a never-ending journey in itself, we came to a halt back down in the forest, having lost all our hard-won height gain in the most glorious of ways.

With a lot of hard work ahead we carried on, although inside we were still as excited as kids on Christmas morning.

After a short, flat spin we were back in the familiar territory of loose rock and steep inclines. Heart rates back up and tiring legs working hard, we pushed on once again, heading further into the wilderness.  The path we now followed is well-used by mountaineers and climbers, but is certainly full of challenges for those on bikes. We stopped and chatted with a fellow rider struggling to fix a puncture and gesturing angrily towards a particularly nasty-looking water bar. I got my Christmas cake out and finished it off before turning onto a more rugged and steeper path.

Passing a loch, the wind had picked up and created waves that briefly reflected the dark mountains on either side before turning into mini white horses. 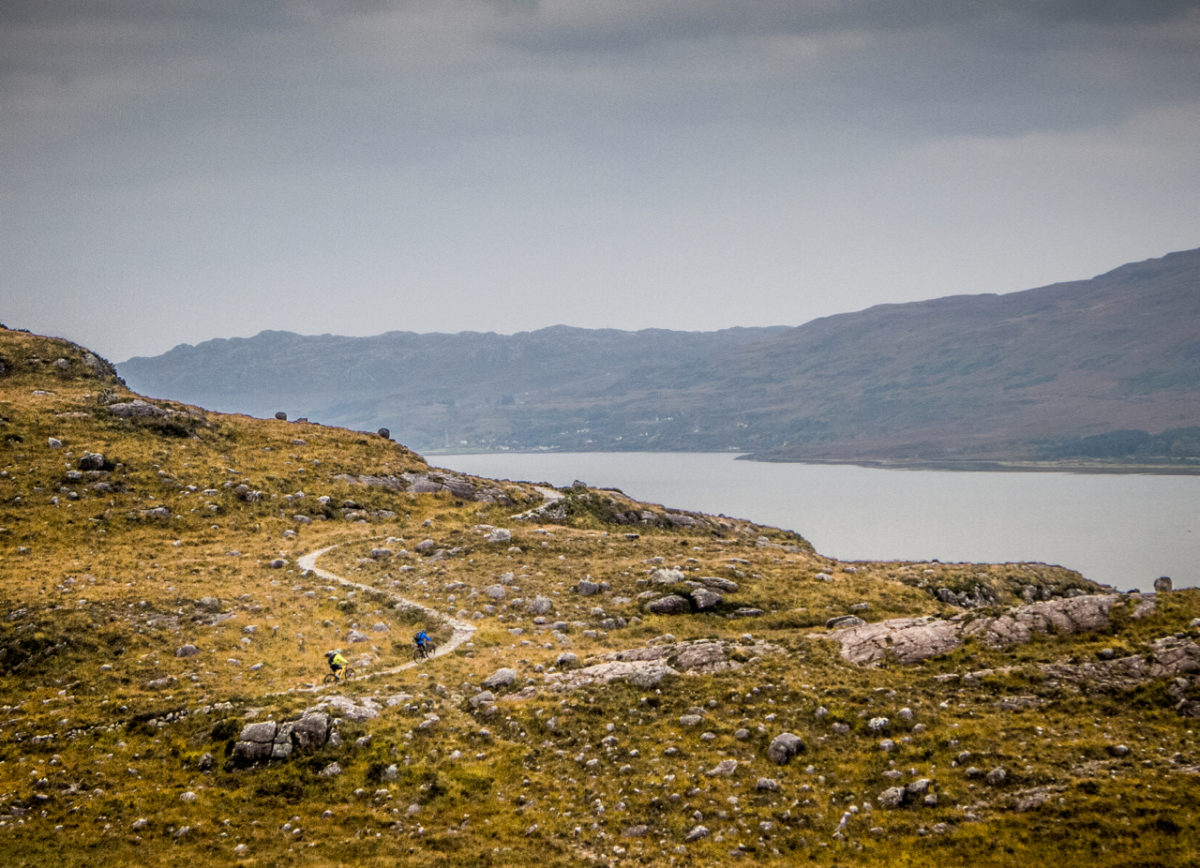 Once again we heaved the bikes onto our shoulders and trudged up the steep and winding path. Shafts of bright sunlight broke through the clouds and highlighted boulders and small lochans, as if our attention was being directed to the stunning rugged beauty of the area, not that we could ever become complacent to it.

Once again we had climbed a good 2,000 feet from sea level, and our reward lay ahead of us. This descent weaved and dropped its way down the mountainside, until finishing almost in the ocean.

Recent storms had hit this particular mountainside hard and the trail, previously in danger of becoming sanitized through over use, had been given a new lease of life. Nature had reset the scales and returned the trail back to all its rocky, loose, and technically-challenging glory.

Nine hours of riding, 3,650 vertical feet of climbing, and one whole Christmas cake later we dropped into our final decent. Saddles back down and bikes set to bouncy, we each savored every drop, slab, shoot, rock garden, and naturally-bermed corner. As we flew by waterfalls with heart-stopping views in every direction, it was in the fleeting moments that I could concentrate on anything other than making it to the bottom in one piece, I told myself, days like this are the reason I became a mountain biker.

This essay is the 2nd place winner in our #TrailTales essay contest. A big thanks to Zoic, Smith, Full Windsor, and Five Ten for sponsoring the contest! 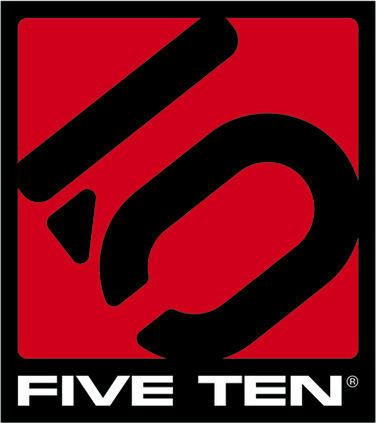 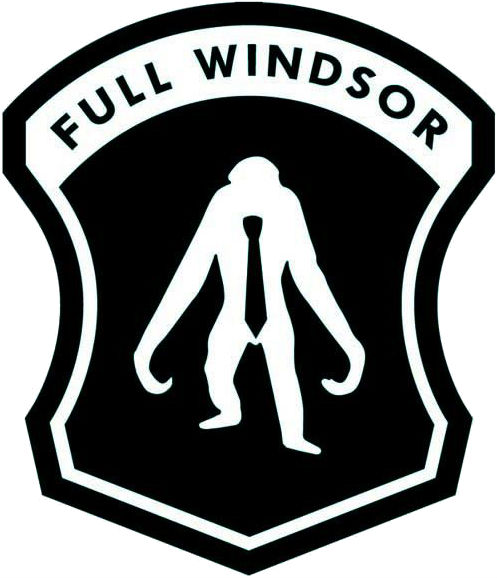 Chris Gibbs
Known to most as 'The Bear', Professional mountain bike guide and lover of sliding tires around the world.

Gear
Reach is Too Long and Seat Angles Too Slack on...
Community
Women’s Freeride Progression this Past Week has Been Absolutely Insane:...
Community
Thanks for Reading Singletracks
Gear
Summer MTB Looks from 10 Brands
Subscribe
Login
Please login to comment
1 Comment
Most Voted
Newest Oldest
Inline Feedbacks
View all comments

Sounds like an awesome day! The final line in the article sums it all up perfectly. Thanks for the outstanding contribution.