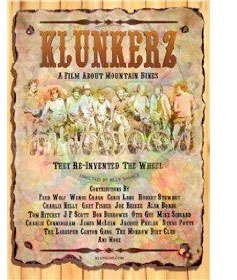 To say Klunkerz is “a film about mountain bikes” is a bit of an understatement, especially given that it’s racking up awards at film festivals all over the country (including “2009 Cycling Film of the Year” at the Endurance Sports Awards and the “Make Your Own Legends” award at the Boulder Adventure Film Festival). Klunkerz is THE film about mountain bikes and mountain biking, a visual history of the sport we’re all so addicted to and it really should be required viewing for anyone who calls themselves a mountain biker. I had the chance to watch the film this week for the first time and despite riding mountain bikes for the last 15 years, I still had a lot to learn…

The amazing thing about Klunkerz is the amount of footage director Billy Savage was able to dig up from the early days on Mount Tam (the birthplace of mountain biking). Consider this: the original group of guys (less than a dozen or so) were really just messing around on modified World War II era bikes on fireroads and trails in the early 1970s and had no idea they were launching a worldwide phenomenon – yet someone had the prescience to film their exploits! Savage puts the vintage film to good use and splices in commentary from the guys who were at the center of all the action – Gary Fisher, Joe Breeze, Otis Guy, and Charlie Kelly. Watching those guys fly down Mount Tam, kicking up dust and having a great time almost makes you feel like you were there.

Klunkerz also makes great use of photographs taken by Wende Cragg during the early days of mountain biking in Marin County, CA. Wende was a part of the first group that rode Mount Tam and as the first female mountain biker she has a pretty special place in history. Wende was also a photographer and we can thank her for documenting mountain bikers’ early exploits out on the trails. These days it’s fairly common for folks to take their tiny digital cameras out on the trail but Wende was way ahead of her time, lugging around her bullky SLR to get the great (and now historic) shots.

Watching Klunkerz made me realize how little I really know about mountain biking. For example, I always thought that downhill mountain biking was a relatively new development but it turns out guys were shuttling mountain bikes up to the top of Mount Tam and racing to the bottom in 1974 (the legendary Repack races). Mountain bikes were being produced in Asia fairly early on (Specialized started doing so around 1983) and by 1986 mountain bikes outsold road bikes in the US. And check this out: cyclocross was started WAY before mountain biking – yet no one thought to build or modify bikes for riding downhill.

Klunkerz also gives us wonderful insight into some of the trends we’re seeing in mountain biking today. From the film we see that some of the early mountain bikers like Gary Fisher were also pretty serious road riders but they made it a point to dress more casually on the trail than the road (jeans instead of spandex, work boots instead of flat shoes, etc.). In the late 1980s and 1990s mountain bikers started wearing road cycling clothes for the trail but today MTB fashions seem to be moving back to our roots (flanels, denim, baggy shorts & jerseys, etc.). The MTB pioneers interviewed for Klunkerz also say the original scene was very laid back and was just as much about socializing as it was about getting out and exploring the great outdoors – kinda like a cross between freeriding a ultra cross-country mountain biking.

If you’re a gear head you’ll also appreciate the detail director Savage includes about the evolution of early mountain bike hardware. From re-purposed Schwinn Excelsior bikes to custom built frames, mountain bikes quickly evolved from hack jobs to highly tuned machines and Klunkerz shows you what the early mountain bikes looked like and how they performed.

Klunkerz is one of those films you just have to see to get a full appreciation for where mountain biking has been and where it might be heading. If you’re not fortunate enough to make it out to a film festival screening you can purchase the DVD online from Amazon.com for under $23. An important addition to any mountain biker’s DVD collection – you’ll be watching this movie for years to come!

Thanks for the kind words, trek7. I really appreciate it. If do want to buy it, PLEASE go through my website http://www.klunkerz.com. It’s also link to Amazon, but it’s MY link, so I make a couple of extra bucks. My ‘worldwide’ distribution deal landed a total of 47 DVD sales in all of Europe in 2008 and domestic sales weren’t much better, so I really could use those extra bucks:). Thanks again and I hope to see you out on the trails.
Ride on,
Billy
http://www.klunkerz.com

I too was very impressed with the movie. It has a great grass roots feel to it, fantastic footage, and a good amount of personal accord of the events. FWIW it can be rented on Netflix if you have an account with them. After watching it once it is on my buy list for the collection.