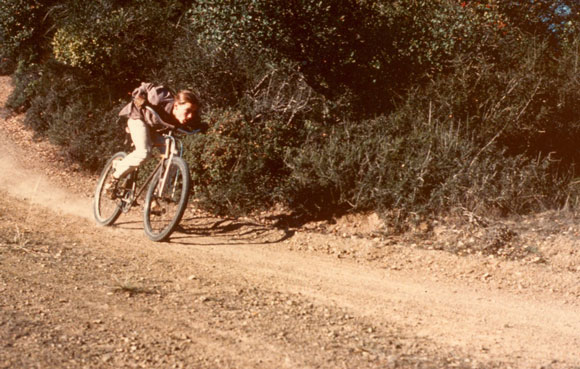 Ok, so the sport of mountain biking doesn’t really have a birthday but if it did, October 21, 1976 would be a pretty good date to start with. That’s the date of the first “Repack” race where Charlie Kelly, Fred Wolf, Bob Burrowes, a just a few others gathered to race their Klunkers down Mt. Tamalpais. At that point the bikes weren’t even called mountain bikes yet but the seeds of the sport as we know it were sown there in Marin County, CA. A few folks still go up to Mt. Tam to celebrate the anniversary of that first Repack race (though ironically mountain biking is off limits there today).

Riding bikes off road has been around pretty much since the bike was invented (there weren’t that many roads back then anyway). Even cyclo-cross, which seems to be gaining more momentum lately, was around well before that Repack race in 1976. But the idea of racing a bicycle downhill in the dirt was an entirely new concept and something that we all enjoy today thanks to those early pioneers.

So happy birthday mountain biking – here’s to another 35 years of adrenaline!

Hip-hip hooray! Cheers to mountain biking and those who were brave enough to point their Klunkers downhill. What a rush!

Huh…. would be great to have a “start date” but tough thing to do. In 1974 or 1975 I had converted my Schwinn stingray; motorcross handle bars, road bike saddle and knobbies. The “gooseneck” stripped out everytime I rode on trails and got air time…. for the life of me I can’t remember how I found knobbie tires during that era???? But I have been addicted ever since. Guess this was precursor to bmx not mtb per wheel size…. but it was all about riding the trails. Before there was issues about riding on trails. Happy Birthday Mountain Biking! I have enjoyed growing up and growing old with you.