Dependable, hard-working, goofy, and a partner in crime. By themselves, these words could describe a friend or even a co-worker. But for me, when combined these conjure up the image of one person: my father. Although fathers’ other halves are often publicized for their contributions, the things many dads give up can’t go unnoticed.

Nowhere is this more evident than on the trails. Mountain biking with a youngster is almost unbearably burdened by a desire to keep kids safe. Fathers can’t just let kids fly off a jump to their doom; constant attention is required. At the same time, fathers are asked to act as both playmate and caretaker. This doesn’t just apply to fathers with young kids; a dad’s job is never done, even as children turn into adults.

Nobody told me it was going to be this cold. That thought and many others like it occupied my mind as I laid in our family’s camper southwest of Marquette, Michigan. It was Labor Day weekend, and my father had agreed to drive up to Copper Harbor for an enduro race. On any good old-fashioned road trip, there is always something that is forgotten. In our case, the item we left behind was my sleeping bag. My dad and I dismissed any concerns because we knew that sleeping bags were generally unnecessary during the summer months.

That night, however, Mother Nature had different plans. Temperatures dipped down into the thirties. Being my stubborn self, I refused any of my dad’s offers to take his sleeping bag. In the middle of the night, as I shivered in the cold under a blanket of my own clothes, he woke up and forced me to take the sleeping bag.

And then he shivered in the cold, alone with his thoughts until the sun rose.

Although we tend to only see our parents’ flaws in the moment, it’s the small gestures that turn into unforgettable memories, revealing just how great dads can be. They are often the ones who give away their own time to make us happy. Whether it’s spending an hour mastering that hip jump, killing way too much time getting ready, or going a little overboard with quality time in the john, it will somehow never matter to them.

And let’s not even start on what some dads sacrifice in terms of money, especially when it comes to mountain biking. Many dads aren’t afraid to take a bullet either; they can be willing to “give a sleeping bag.” They don’t do these things because they have to; in fact, most times they want to. Their undying commitment to us in this way should never go unnoticed. 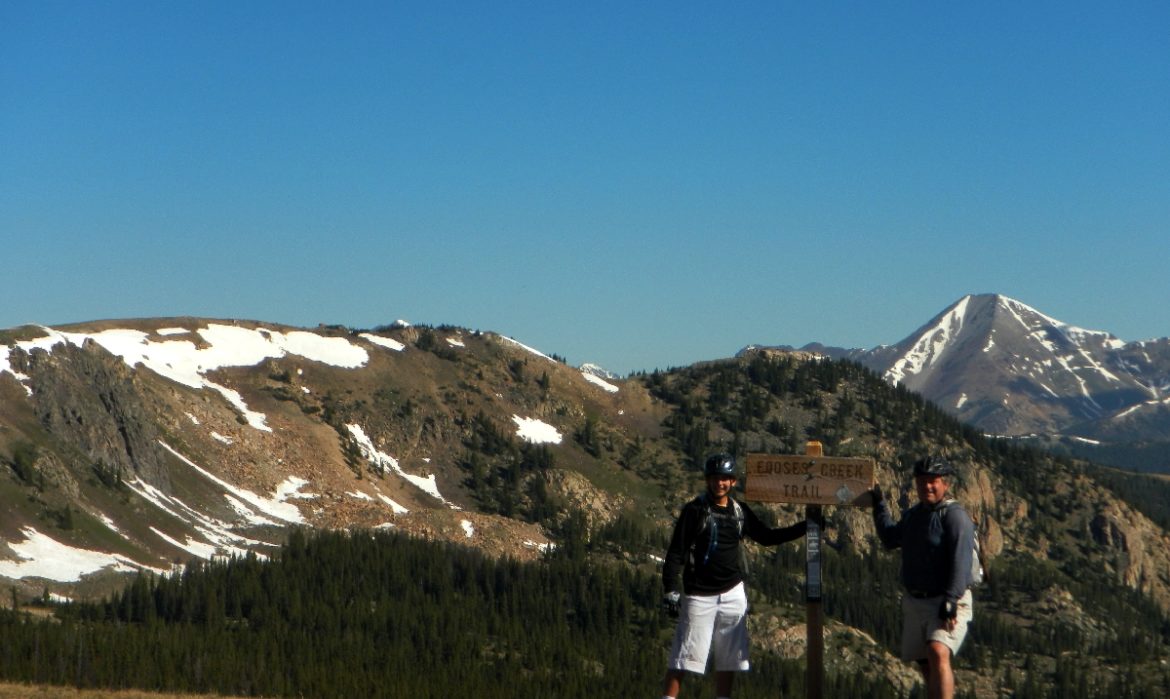 When I first started mountain biking in 2014, I had dream to ride both the Whole Enchilada and the Monarch Crest trail. By the summer of 2015, my dad helped me make my dream a reality.

One afternoon we were sitting in the camper at Marshall Pass on the Great Divide and a fly buzzed in. My dad hates flies. After about two minutes of co-existing with the insect, he quickly started to go after it. Smack! Smack! Smack! Wisconsin flies are slow and fattened. This one was not.

Another couple minutes went by. Letting the fly get to him, he turned his claps into a punch. The punch killed it! But that wasn’t all. His fist continued through the back window of the camper accompanied by the sharp, piercing sound of shattering glass. Laughing uncontrollably with my entire body, I looked up from my map and had to get out of the camper before I broke something myself. I still joke about it today, giggling a little at the memory.

Our fathers can be our best friends. Any other person would loath how often I bring up that embarrassing anecdote. However, when I remind him of it, my dad just smiles and laughs. There probably wasn’t a single other person who would go on that trip with me. My mom, in all her glory, wouldn’t even join us until later in the trip. I don’t blame her because driving around and getting into trouble shower-less with no particular place to be isn’t everyone’s cup of tea. But my dad was more than willing.

For our trip to Douthat State Park — one of my favorite places to ride — my dad was between bikes, lacking his own bike at the time. My solution? A 2003 Trek 4500 complete with “functional” v-brakes, Walmart’s finest pair of hybrid tires, and Duct tape covered grips. He rode it the whole time like it was the finest piece of machinery he’d ever put a leg over. No complaints, no looks, only smiles.

To this day, I don’t know how he did it. I would have been fed up with that monstrosity before the first rock in the trail. Besides the literal guidance they provide, trail-worthy dads offer an impressive amount of moral instruction. Every ride provides a new and different chance for direction. Broken derailleur? Dad fixes it and you learn the value of being self-sufficient. Did dad hurt his arm in a crash? He rides it out and you learn perseverance. Did he ride a horrible bike and love it? You learn how to make the best of what you have. These skills gained at the expense of dad are always applicable to real life, and allow us to find success anywhere we go. They are the values essential to modern life. Out on the trail, dads are our example. All we hope to do is someday manage to provide as good of an example as they did.

It’s Father’s Day. So instead of getting your pal a cheap card and a tacky present, reflect on the things you’ve learned from you dad. Then tell him how much you appreciate what he’s done for you. Or if that sounds too sappy or daunting, just invite him to go for another ride.

Your turn: What have you learned from riding with your dad?

Matthew Bonner
I love riding bikes around the country and am always looking for my next adventure. Whether it's five minutes from home or 1,000's of miles away, the simple joy of riding bikes is enough to make every ride great.

Great stories of riding with your dad!

One summer I decided I wanted to backpack the portion of the Appalachian Trail that goes through Georgia. I think it was about 60 or 100 miles. My dad took off work to do it with me as soon as school got out for the summer, even though he wasn’t a big fan of backpacking. That summer I learned about self sacrifice for the love of others.

Great write up Matthew. Sooooo glad you had such an awesome dad. That is a true blessing and gift in life which you obviously understand. My dad, though not a mountain biker (I grew up before there was mtbing), definitely instilled in us kids a sense of adventure.

Now I may have missed it, but there might be on piece of your story still missing ??? I want to know how your dad was your “partner in crime”. 🙂 Sounds like there’s a good story or two there that we haven’t heard yet.