With so many great enduro mountain bikes on the market today, it’s hard to know which one to choose. I recently had a chance to test ride 5 high end, carbon fiber enduro bikes back-to-back in a 24-hour period, and here is what I learned.

The first enduro bike I tested was the Santa Cruz Nomad. This bike was the third most popular enduro bike of 2017 according to Singletracks readers, and with 170mm of travel front and rear, it was the biggest bike in my test.

This should go without saying, but the Nomad was a blast on the descents, every one of which left me wanting more! The Nomad is a true hot rod on the trail–stable at speed, in the air, and through the corners. I found myself heading into corners at speeds I normally wouldn’t even consider, only to find the bike (and tires) held firmly to the ground, carrying me safely through to the other side. Ditto for steep slopes, techy sections, and small kickers.

I never felt like the suspension platform was working against me on any of the climbs, though as the specs clearly show, the Nomad is not designed to climb as well as some of the other bikes I tested. The good news is I felt like the front wheel tracked well even through the steep ups, and the lightweight X01 build didn’t weigh me down.

I could see myself riding the Nomad on my local trails–trails very similar to the ones in my test–without feeling like I was pushing around too much bike.

Next, I tested the Intense Tracer. Intense just bumped up the travel on the Tracer to 165mm in the rear and increased the bike’s reach. Singletracks readers recently ranked the Tracer among the best and most innovative bikes of the year.

I was struck by how nimble the Tracer felt and how confidently the bike cornered. While the Nomad rode like a brutish muscle car, the Tracer proved itself to be a sporty import, capable of weaving in and out of trees and gliding over the trail at high speeds.

During my test, I noted that the Tracer was louder than many bikes I’ve ridden. This was mostly due to the buzzy E13 freehub, but there was also a mysterious rattle. However, without additional time on the bike it’s difficult to diagnose the exact source of the noise.

Climbing steep grades was a joy on the Intense Tracer thanks in part to the bike’s generous seat tube angle. The suspension platform felt firm as well, though the flip side to this is it didn’t feel quite as supple on the descents as some of the other bikes in my test. In a longer-term test, I would have tweaked the suspension settings front and rear to optimize the tuning a bit more.

One issue I encountered while riding the Intense Tracer was heel rub on the drive-side chainstay. This isn’t the first time I’ve had this problem with a bike, but it was the only bike in this test where it was an issue for me.

For my final bike on Day 1, I tested the Mondraker Dune RR.

This will sound weird to some people, but I kinda enjoy climbing when I’m mountain biking. For that reason, I tend to prefer bikes that climb well. The Mondraker Dune did not let me down here, offering a solid and efficient pedaling platform that wasn’t bouncy at all. Not only that, the front wheel tracked surprisingly well on the climbs, never feeling wander-y or out of control.

On the flip side, I also enjoy the thrill of a fast descent and the adrenaline that’s associated with launching a bike into the air. Thanks to its long chainstays and wheelbase, the Dune was super stable on high-speed descents. The flip side to this is that the Dune ended up toward the back of the pack in terms of cornering capabilities, which wasn’t helped by its tallish bottom bracket.

The first bike I tested on Day 2 was the Marin Wolf Ridge, a bike that has many riders intrigued due to its unique suspension design. In fact, Singletracks readers voted the Wolf Ridge the most innovative mountain bike of 2017. So naturally, I was curious to see how it performs.

I started my test ride with a smooth descent and found the Wolf Ridge to track the trail extremely well while providing plenty of cushion for landing. Through rooty, pedally sections, the bike felt a little firmer compared to other bikes I tested, though not to the level of feeling harsh. It’s certainly possible this firmness could be tuned out through long-term testing.

The firm platform came in handy on the climbs, where the bike was responsive and quick, even with the larger 29er wheels. On paper, the slack seat tube angle should have made pedaling less comfortable, but in practice, I found myself able to rocket up short, steep climbs that seemed to sneak up at the last moment. The Wolf Ridge cornered as well as any of the others in my test, despite the slightly longer chainstays and big wheels.

Given the risk of introducing a unique suspension design, perhaps the biggest compliment I can give the Wolf Ridge is to say it performs just as well as almost everything else on the market.

I tested the Santa Cruz Bronson last, and it ended up being my second favorite overall. Honestly, I was pretty sure I would hate this bike but Singletracks readers are stoked on it, so I had to see what the hype was about.

I found that the Bronson cornered great, and was among the easiest bikes to handle. The short chainstays really help here, as does the low bottom bracket. One of the complaints some riders lodge against Santa Cruz bikes in general is that their bottom brackets are just too low, leading to increased pedal strikes. I’ve certainly experienced this on my own Tallboy, but during my short test ride on the Bronson I didn’t ding a single pedal.

Santa Cruz seems to wring a lot of performance out of just 150mm of travel in the Bronson, and I’m not just talking about soaking up the big hits. Small bump compliance felt great, and I found the overall suspension to feel more responsive and plush than most of the other bikes in this test.

Finally, climbing on the Bronson was a breeze, with a surprisingly efficient platform even on the steepest out-of-the-saddle grunts. The front wheel never wandered far, unlike my experience with the Santa Cruz Tallboy just last year on the very same trails.

Overall, I get why Singletracks readers (and mountain bikers in general) are flocking to the Santa Cruz Bronson. In my opinion, this bike really is one that other enduro bikes will be measured against for some time to come. I could easily see owning this bike as my daily rider or as the only bike in my quiver. 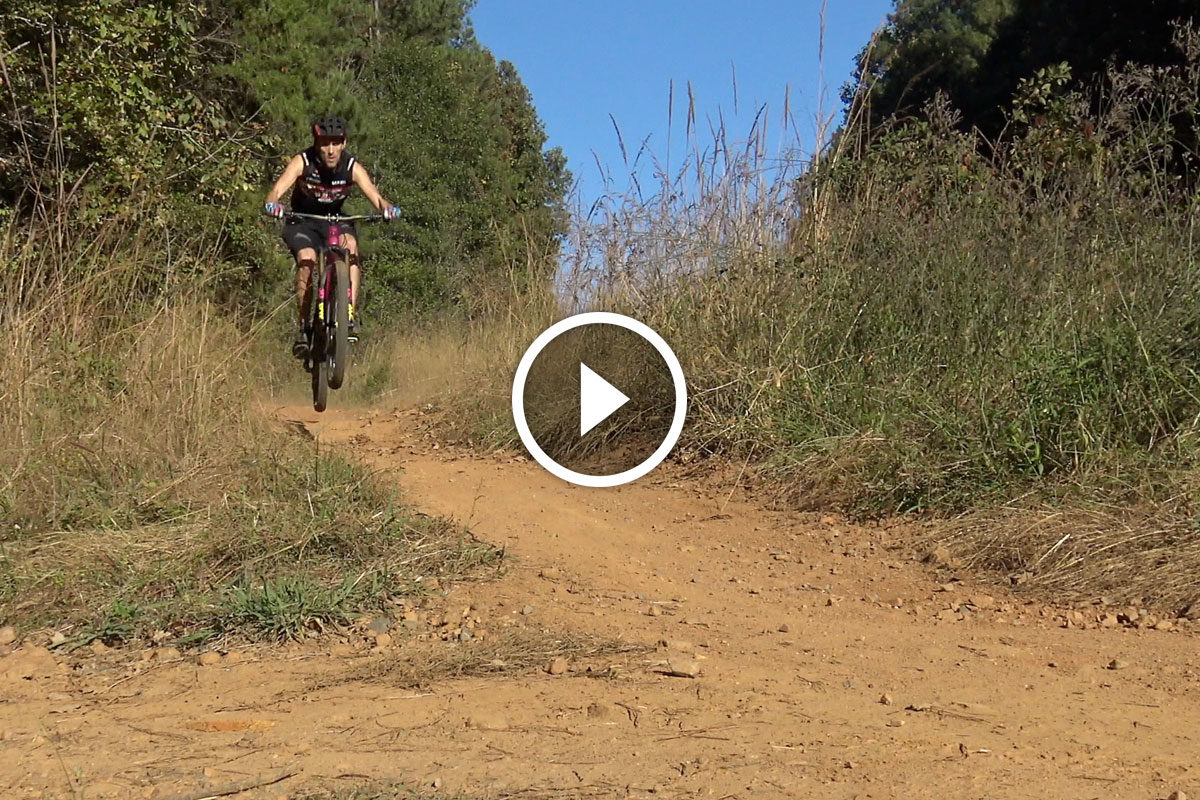 I just picked up a 2018 Tracer frameset after demo’ing the bike a couple weeks back. Luckily my demo was built up with SRAM Eagle since that’s what I prefer on my own bikes. The knock on this bike in some reviews thought it didn’t climb well. You seem to disagree, as did I….wholeheartedly. What I noticed immediately on my 1st DH run thru a steep, sweeping bank was something else you mentioned…how well it cornered. Your sports car analogy was spot on. After my 2.5 mile climb, I was sold after that 1st sweeper turn and rode the rest of the day with a huge grin on my face.

As far as heel rub, I **never** experienced the issue in 25 years of riding with SPD pedals. I switched to flats last September and now I get heel rub on every bike I ride. I never feel it occurring during the ride so it’s a non issue for me as it comes right off.